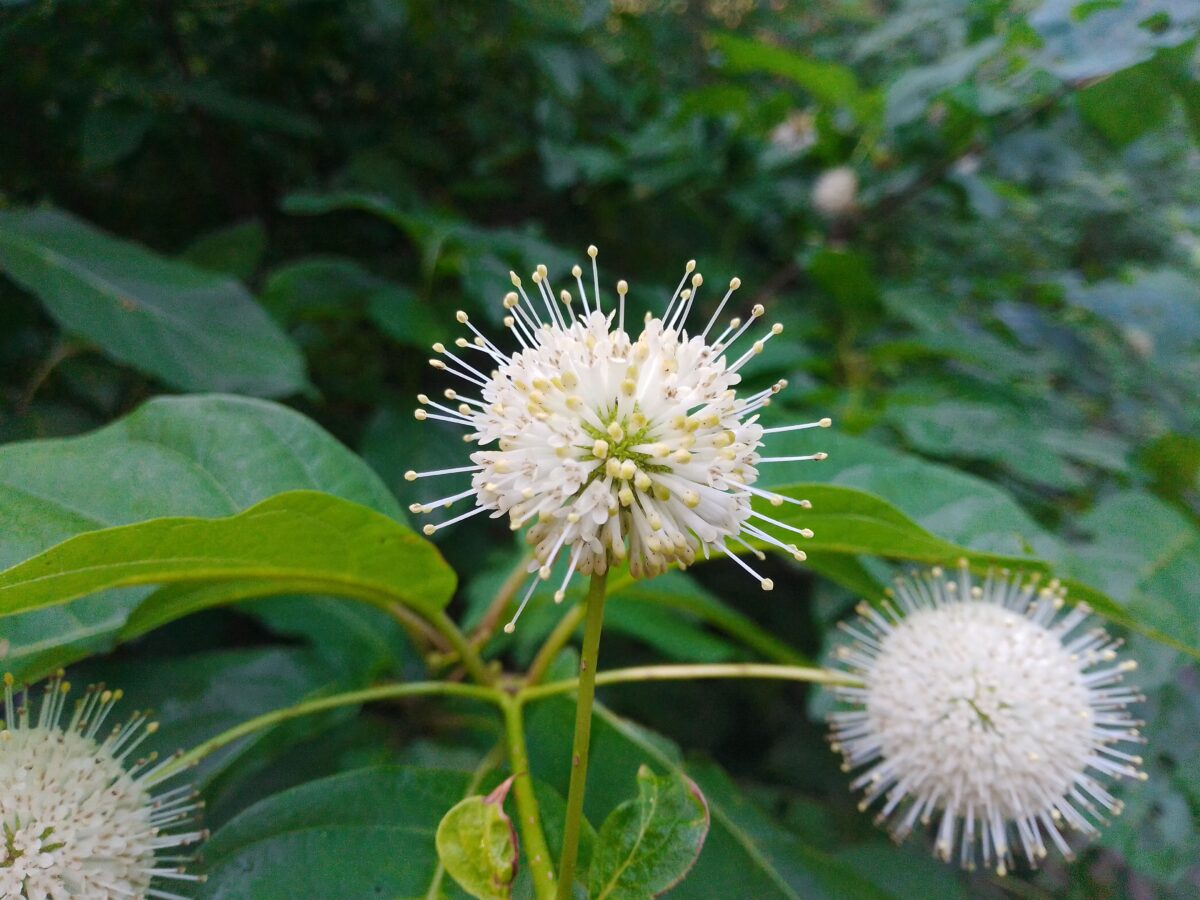 On Tuesday morning we awoke to a great horned owl hooting at 4:20. The cat had been milling around the room, irritated that we weren’t up yet. The owl cut off after ten minutes, and I could hear the cardinals and robins far off in the neighborhood, calling at about equal volumes. This is the season for the robins to back off as the cardinals take the morning shift, and most years I miss the transition, realizing at some point in late July or August that they’ve made the switch, and the predawn robins I’ve been listening to since March are largely replaced by morning cardinals. I wonder whether I’ve caught them this year in the midst of the hand-off. On July 4, robins were singing by 4 a.m., but at 4:30, a cardinal started quite loud, seemingly in the foreground as the robins sang on in the background. By 4:45 they were pretty evenly mixed at 4:45; an hour later, I was only hearing cardinals. I most likely haven’t had my ears tuned properly in July of previous years.

I got up to make coffee, and at 5:00 the owl called again. Then the house wren began singing. The wren goes on for much of the morning. We have a family of them nesting in our rain-garden bluebird box every year, and when we sit outside, one of the parents likes to yell at us, neck outstretched and standing on tiptoe, twitching along the top of the fence as it scolds and patrols the perimeter of the yard. At 5:20, a white-breasted nuthatch and blue jay called, then the first cicada wound up for the morning but gave up. It was still chilly. At 5:45 a couple—a human couple—had an awful fight down the street, loud and unhappy and unpleasant, screaming at each other. I have not often heard such a fight, and never sitting in my backyard in the morning like this. I walked down the street to see if I could do something, though I didn’t imagine there was much that could be done. A white car was stopped in the middle of the road, canted to the right, as though caught in the middle of a turn, whether watching or participating I don’t know. Then the yelling stopped and the car drove off. The cardinals and house wrens were quiet by this time.

Goldfinches were flying overhead. They have been singing at around 5:15 these days. I hardly noticed them two weeks ago, but they have been all over the garden since we arrived home this weekend, feeding on the aphids that are focused on siphoning sap from our cup plants. We watched one perching on the telephone line over our table out back after supper the other night, cleaning its breast, looking around for we-knew-not-what, giving us a good show before it flew off to the front of the house again. Hummingbirds have been abundant. They particularly favor the red beebalm flowers in the garden, but they also like Rachel: one hovered right in front of her face the other day, considering its options before it moved off to the large patch of Monarda nearby. Saturday night, we sat outside in the dark on our friends’ patio, talking about music and kids and school and books. A hummingbird materialized without warning in the flowerboxes, churring among the petunias, wings a haze along its sides as it turned its attention to each flower in turn. It could not have been there more than a few seconds before we noticed it, but I couldn’t say for sure. None of us had seen a hummingbird working at night before. Of course, as soon as we could see better, it turned out we were not seeing one now: when our friend Paul turned a light on it, the abdomen and proboscis of an enormous hawkmoth were obvious. Its movement between the flowers was deft, but not as fast as a hummingbird’s. Its wings seemed to slow for a moment as it shifted to the edge of the flowerbox, considering its options. Then it was off.

The stickers of brittle cinder fungus that were stamped onto the sides of fallen logs in Maple Grove at the beginning of July are gone. A small fungus I take to be stinking earthfan has started to emerge along the trails in Lyman Woods. Enormous, fleshy boletes have sprouted in Maple Grove. The slime molds are not as abundant as usual, which surprises me given how much rain we had in the second part of this summer. Perhaps I missed the best time for them while we were out of town. Or maybe they are not as prolific this year because of the summer’s early drought, which was deep: at some point in June, a colleague from our living collections department told me we were eight inches under the average for our time of the year. Whatever the reason, aside from a massive pool of dog vomit slime mold at the base of a neighbor’s tree—which I thought was kind of exciting but that he didn’t like so well—I have mostly been seeing only honeycomb coral slime mold and something else growing near it that resembles little tapioca pearls. One exception: I flipped over a log the other night in Lyman Woods, and its underside was coated in small, slender Cribraria sporophytes, like glandular hairs. Interspersed with it were the alien rice grains of Arcyria. Other than that, very few slime molds.

We’re just a month out from the solstice, typically our hottest weeks of the year, but the temperature has turned cooler and pleasant. The plants are turning their attention to fall. Black walnuts are larger than golf balls. White and bur oaks are dotted with immature acorns. Woodland tick-trefoil flowers are converting gradually to fruits, sticky flat loments, each segment bowed like a sheet sagging on the line after being caught in the rain. Buttonbush is in full bloom along the lower trail in Lyman Woods, the individual flowers long-tubed, four-petalled, nutlets developing at their bases. The flowers are aggregated into a globe that bristles with exerted stigmas and are outstanding to see right now. American bellflower is blooming throughout the Arboretum’s East Woods. Black elderberry fruits are developing in the floodplain of St. Joseph Creek, each hardly larger than a mung bean and dry, many falling off already. Solomon’s plume berries are hardly developing at all, most plants devoid of fruits. These and a few other species seem to me to suffering now from the drought of early summer, though I have taken no careful head-counts.

But others look fine to me. Broad-leaved leek (Allium tricoccum in the narrow sense) is not in full bloom, perhaps a fifth of the flowers fully open; but fruits maturing on the narrow-leaved leeks (Allium burdickii) are as abundant to my eye as they are in any other year. Prairie trillium seeds inside the pale, fleshy, three-winged berries are white and firm, a little pulpy still, but growing. Black snakeroot and bottlebrush grass are thriving, fruits ripe and brittle and dropping at a touch. Blue cohosh berries are developing slowly, as they always do. Woodland sunflowers are beginning to bloom along the road just past the Arboretum’s oak collection. In a week or two that stretch of the forest will glow.

Thursday morning the great horned owls started up at 4:00 on the nose. Two of them moved into the white pine that overhangs our driveway. A third was calling on its own from a few houses away. I stepped outside to watch them more closely and moved beneath the pine, and the couple became silent. I could see one of them about thirty feet up, surprisingly slender, immobile. It was the first to fly off, silently to the south. I suspect it was the male. A half a minute later, the other owl flew away into a neighbor’s tree across the street to the north and started hooting again. Its voice was the low intoning call of the female, inviting a response, not the pleading response of the male. At 4:45 the cardinals started up, with a scattering of robins. At about 5:00, the wrens were going strong. All three owls went on singing without a break until 5:20, then they stopped.

It’s Friday as I write this. It rained this morning at about 3:00, for only 15 minutes or so. The birds are subdued nonetheless. Until the first cardinals started calling just before the neighbor’s sprinkler kicked in at 5:00, there were no birds at all, not robins or cardinals or owls, only crickets. Now it is only cardinals, and few of them. Jupiter is hazy and high in the southwest. Chicago is lighting up the clouds to the east. Last night I walked out through Lyman Woods as the sun was going down. The bur oaks were packed with small acorns, which if they keep maturing will I think make it a mast year. Two joggers were running through a tunnel of buckthorn in the northeast quarter of the preserve, where the Hill’s oaks are abundant. I passed the quiet bee hives, passed an older man carrying a camera, passed the joggers again. The mosquitos came out and were suddenly fierce, and I turned up into the woods and back towards my car. The katydids were fired up in the canopy. The crickets were going strong. There were owl droppings on the foliage along the trail. I passed the joggers one more time.