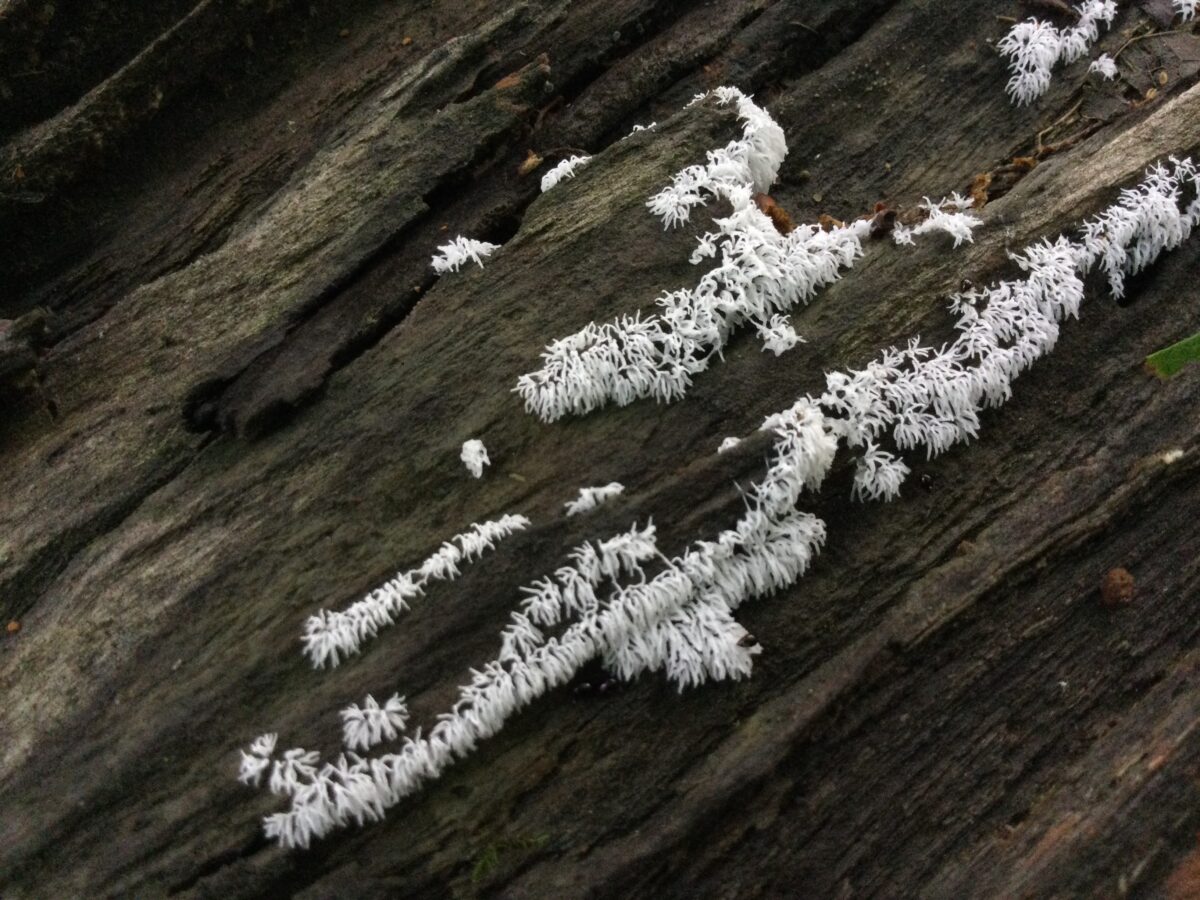 With all the rain of the past week or so, we have hardly been outside. The canopy we purchased last year has been cinched down low over the chairs so it won’t blow away in the storms. The cushions have stayed on the chairs, which are old and a little rotten, and they have all stayed pretty dry. Thursday morning I had raised the canopy and was sitting under it as the sun rose, and I found after a few minutes that ants were crawling up my arm. I stood to find my cushion swarming with them. I flipped it over. A hundred ants scrambled, furiously moving their babies from the safe cover of the cushion down to the wood chips below. They reminded me of the foxes and geese that roamed out into the streets and sidewalks in the first weeks of the pandemic shutdown last year. The non-human world is quick to pick up where we leave off.

I visited Maple Grove Wednesday just before supper time. The fallen sugar maple that I described on the solstice as “A solitary sugar maple, perhaps 200 years old and, to my eye, in good health” is still lying where it has been for several weeks. Its fall, however, is no longer quite the mystery it was to me as I sat at my desk writing about it after the solstice. The tree turns out to be rotten in the middle. Moreover, it is snapped off at a point where the bark burled up around its middle, a scar from some affliction or wound of a decade or more ago. It was at this seam that the bole broke, and it is thus less than surprising that it went down. I should know better than to write about things like this from memory, especially when evidence is close at hand. My memory is fallible, my impressions subjective. I see most clearly with a notebook in hand. In the herbarium world, we generally hold that an observation is suspect unless it’s accompanied by a specimen or at least a georeferenced, time-stamped photo. It’s similar with my own observations. Unless I note it at the time in the field, or take pains to recall the details right after a walk, all bets are off.

It’s midsummer in the woods. Woolly aphids have been drifting across the Maple Grove trails to alight on leaves, like the cottonwood seeds that clogged the sidewalk cracks as late as early June. Ebony jewelwings flounce around in the foliage. Morbid owlet moths are rampaging in the understory. I watched an ant about the length of my pinky nail carry in its mandibles a severed grasshopper leg one-and-a-half times its length. It travelled several inches down a smooth, decorticated log. I wrestled the leg away to get a photo. The severed thigh was striped, the exoskeleton apparently devoid of meat. What can an ant do with the empty shells of its prey? I doubt it was just a battle trophy: do animals do such things, drag mementos home to show off or just to prod their memory? Do they have a feeling, as we do, that this moment is unique and bears marking in some way? I do not imagine that they do, but could we know?

Great-crested flycatchers are calling, and toads and chorus frogs have been singing from the marshes embedded in the neighborhoods of Downers Grove, recalling spring. Corollas have started dropping from the tips of enchanter’s nightshade flowers, leaving the swelling burs at the tips of the inflorescence branches. Black elderberry is in full flower. Midge galls have been showing up sporadically on the wood nettles for at least two weeks. Black cherry leaves are pricked with spindle galls. The leaves of wild grape (Vitis riparia) and enchanter’s nightshade are filigreed, whether from leafminers run amuck or from aggressive snails or slugs I do not know. Solomon’s plume is weighted down with hard, speckled berries. Jack-in-the-pulpit fruits are green and hard, and difficult to find: many plants appear not to have put up infructescences this year, perhaps a legacy of the long drought at the beginning of summer. Spent anthers are falling from the flowers of Elymus villosus. Lopseed flowers are near their end, still perfume-mauve and divergent at the tips of the inflorescence, ripened into reflexed but still rubbery fruits toward the base. White baneberry fruits are forming doll’s eyes but still creamy in color. American pokeweed in the shady understory is just forming inflorescences, slender, white, and densely packed with tight white fists of floral buds. White coral slime mold is piling up thick on the sides of logs that have been wet for the past week and a half or so. A few logs are speckled with brittle cinder fungus, many are growing colonies of honeycomb coral slime mold. Chantarelles are emerging.

The wild leeks, which I wrote about on the solstice, are still balanced across the reproductive divide separating our two species: the narrow-leaved leek, Allium burdickii, has essentially completed flowering and is already producing fruits. It is mostly on the upslopes. The red-based, broad-leaved leek, Allium tricoccum, is just starting to open into inflorescences, spathes tearing along the edge over the past week to release a profusion of white flowers like fireworks. It is mostly in richer soils than A. burdickii. These two have minimal chance to interbreed, and if I were a plant or a pollinator I would never have seen them as the same species in the first place. That I did so for years I can only chalk up to a predisposition to lump species and a fixation on the similarity of their foliage, which comes out earlier and fills the understory in the spring.

I sat outside writing on Thursday or Friday morning at the end of June, about 5 a.m., and the cardinals were going full force, robins chuckling in the background. I believe there were exclusively robins singing earlier that morning, but I won’t swear on it (I didn’t write it down, and even an hour later I wasn’t sure whether I was remembering the morning of the same day or a morning from a month earlier). I wrote an essay earlier this month in which I made the point that I write not so much to convey information as to see more clearly myself. This is true, but it’s only one side of the story. I also write to remember, to lock into my mind trails and plants and people and moments that I want to dwell on. Any time the writing becomes just a way of getting information out of my head and onto the page so others can read it, I lose interest. That’s not to say I don’t care if people read it: it makes me happy to think that you might be reading this now, whoever you are, despite the fact that you have a world of interests and projects of your own, things you should be getting off to do, and that we might have some connection across the page about landscapes and plants and birds. But the reason I write is for the clarity of thought and the occasion to remember things, to recall things, and to correct memories. This week, I correct a memory of the fallen maple tree and perhaps won’t be confined to misremembering it every again. Tomorrow morning, perhaps I’ll correct a memory of the robins calling today at 4 a.m., find that in fact it must have been cardinals already at that time.

But for now, the sun is a few minutes from rising and a mourning dove has just started singing from the neighbor’s roof. Brooklyn has wandered outside to see what is going on. My coffee is cooling, the fire is getting smoky, and it’s time to start the day.

8 thoughts on “The week spanning June and July”