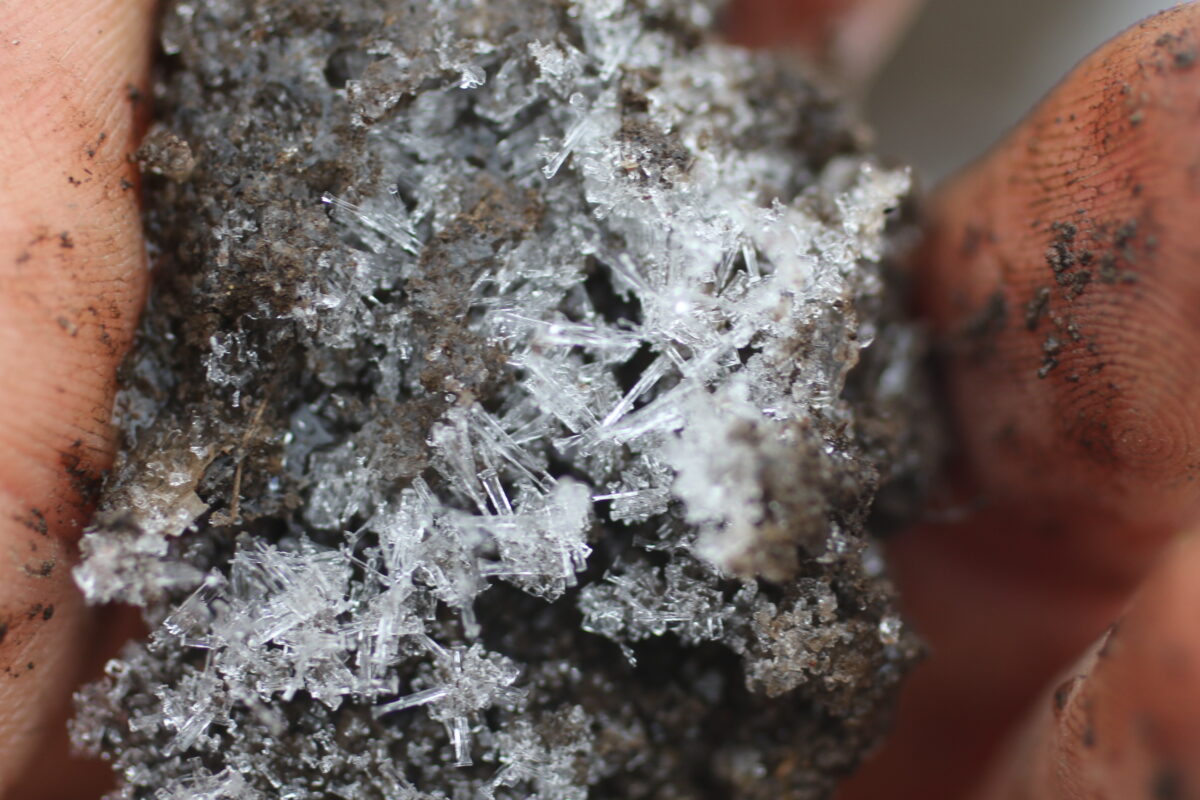 We are about a month past the winter solstice. This is the one- or two-week period when winter is, on average, its coldest, despite the extra half hour of daylight. I’ve been thinking about the dormant forest understory the past two weeks, about wild leek seeds resting at the bases of strawlike scapes, ebony and glistening and motionless above the quiescent bulbs. I’ve been reading about false mermaid. Its seeds should have germinated by now beneath the leaf litter and snow, root tips poking out through the bumpy nutlet wall in hollows where temperatures have hovered above freezing for at least six weeks following autumn. I’ve been reading about false rue anemone seeds, which need no after-ripening and have begun to germinate. I’ve seen them in past winters, waiting for spring beneath the snow. I haven’t seen them this yet year, but mainly I suspect for lack of looking.

When I visit the woods recently, I’ve been a bit casual. I lap up beauty as I stroll. I leave sparse and rambling trails through my field notebook, which is typically packed with particulars. There’s a part of me that thinks, “Take a break; enjoy the woods.” But there’s another part of me that thinks, “Really? A break from what? All this looking and ‘thinking’ you do all the time?” Overall, I have more sympathy for the second voice. I once attended a lecture in which we learned that 30 minutes in the woods will help you concentrate better, but only if you don’t spend it doing things like keying out plants. If I understood the speaker correctly, we were to absorb the beauty without taxing our minds too much. I think the argument was that with all that concentrating, your brain doesn’t get the break it needs. Maybe that’s true. But I am inclined to think of the fact that one day I will be dead, and of all that there is to see before then, and of how much I’ll miss if I don’t look closely.

The birds are not privy to my concerns, thankfully, and they have been invigorated by the lengthening days. Cardinals whistle late into the morning when I walk Brooklyn. Chickadees have been singing. Red-bellied woodpeckers have been as noisy as gray squirrels. Hairy and downy woodpeckers are drumming. On the 24th of January, there was a white-throated sparrow singing its heart out at the southeast corner of Lyman Woods. I had always thought DuPage County was too far north for their overwintering. I have previously only heard their songs in the north, where they breed, and in our area on the fly-through in spring and fall, when the young ones just learning their calls warble, bold and adorable and as shaky-voiced as adolescents. Apparently there are some exceptions.

About a week ago, a late afternoon in the middle of January, Rachel and I watched a male and female great horned owl calling to each other from separate trees near the south end of Lyman Woods. Their calls were about the same tempo and rhythm as a territorial call, but softer and more relaxed: who, who, who, who-who-who-who… and the female called deeper and stronger than the male. They were perhaps forty feet from each other. I have seen owls like this bow as they project their voices, but we didn’t see them doing it this time. What we did see was this: the male flew over and mounted or attempted to mount the female. The owls twittered, voices abruptly as high and thin as song birds’, and after a second or so he was off to another tree, nonplussed.

How many times have Rachel and I seen or heard great horned owls, but never witnessed this? You can never know enough about the common birds, the ones you live with. The great naturalist John Burroughs wrote, about 120 years ago, an introduction to Neltje Blanchan’s Bird Neighbors:1

But you do not want to make out your bird the first time; the book or your friend must not make the problem too easy for you. You must go again and again, and see and hear your bird under varying conditions and get a good hold of several of its characteristic traits. Things easily learned are apt to be easily forgotten. Some ladies, beginning the study of birds, once wrote to me, asking if I would not please come and help them, and set them right about certain birds in dispute. I replied that that would be getting their knowledge too easily; that what I and any one else told them they would be very apt to forget, but that the things they found out themselves they would always remember. We must in a way earn what we have or keep. Only thus does it become ours, a real part of us.

There is something to object to here in Burroughs’ tone toward the “ladies” who had written him,2 but I appreciate his admonitions against furry second-hand knowledge. Burroughs knew as well as anyone that we earn our place in the world by what we do and what we learn of the world, and we earn our knowledge through work.

Outside, right now, tangles of ice crystals are heaving the soil into crumbles, tilling in the false mermaid and false rue anemone seeds. Skunks are rooting up wild onion bulbs. Sedge seedlings are germinating beside the burnt stumps of their parents. Spring beauty shoots are caught mid-pace beneath slabs of bark welded to the ground by frost. You can see at least these three things in the East Woods now if you go looking today.

But for the life of me, I have not been able to find the false mermaid seeds themselves in midwinter, never at this time of year. That part is just book knowledge for now.