“Nothing was special, but everything was timely, and as we walked alongside it as it sang or grew we were made happy in the day.” – Tim Dee, Greenery, p. 115 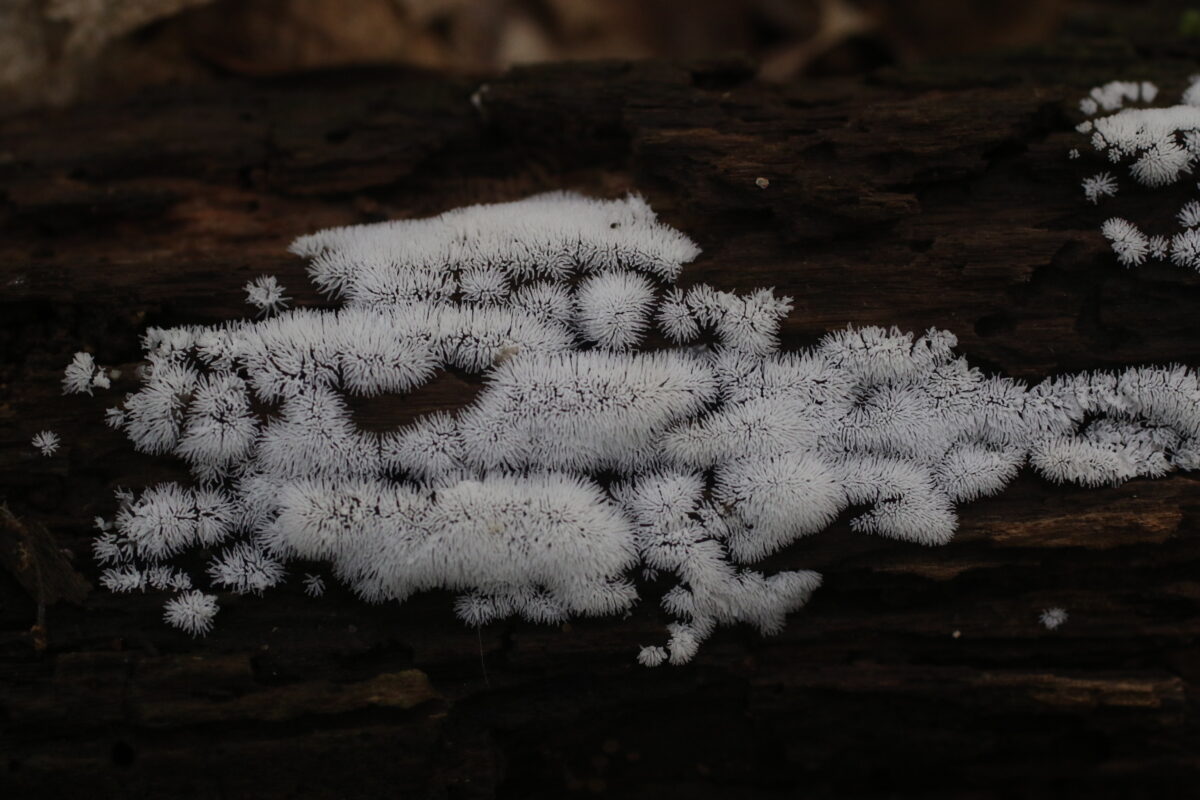 It is slime mold time, and on the last Monday of June, every spongy-rotten white ash log was sprouting lines and patches of honeycomb coral slime mold (Ceratiomyxa fruticulosa). It was growing as well on trees eroded into dry ridges and canyons and on decorticated trunks with slick surfaces. The stuff was everywhere. It is a clean, white, narrow brocade woven tight on the trees’ surfaces, more intricate than any human could make. Wolf’s milk (Lycogala epidendrum) was sprouting orange spheres full of orange goo beside it, reminiscent of Italo Calvino’s description of “moon-milk… composed chiefly of vegetal juices, tadpoles, bitumen, lentils, honey, starch crystals, sturgeon eggs, moulds, pollens, gelatinous matter, worms, resins, pepper, mineral salts, combustion residue” (in “The Distance of the Moon” from Calvino’s The Complete Cosmicomics, ch. 1). Elsewhere the wolf’s milk had matured further to form brown spheres as dry inside as spent puffballs. There was a yellow, sheetlike plasmodium, perhaps of Physarum. But there was no Cribraria, the delicate forests of alien lollipop-trees a millimeter or two tall I had seen at the beginning of July 2019, just as the Crepidotus were emerging from the same logs, and that I was hoping to see.

That night the rain came down in torrents. The rain ran in sheets down the alleyways into Main Street Downers Grove. Rachel and I returned home from supper, the first we’d eaten out since mid-March, to find a slug crawling up our window screen, four feet from the ground. The next day, the St. Joseph Creek floodplain was filled with debris. Wild garlic leaves were battered to the ground. Without warning, the honeycomb coral slime mold had disappeared. In many places, perhaps everywhere, it seemed to have been replaced by small white spheres, like delicate roe, that no one I have talked with has been able to identify yet beyond agreeing that it is some kind of slime mold. I tried for a day to convince myself these were just another form of honeycomb coral slime mold, but no one I corresponded with has seen them take this form before. We will have to watch them and see.

Black snakeroot fruits this week are bristly and full, and the wild leeks that are arched over and blackened have begun to push inflorescences out from the spathe. The straight plants appear to flower first. These darkened ones take longer. Are they as fecund? Is this a color morph, or indication that the plants have been weakened by disease or by frost or by something else? I do not know. Bottlebrush grass, which I assumed had already come into flower is only now letting anthers sneak out from the margins of its long, brittle spikelets that run the length of the inflorescence axis. White jelly fungus glistens on rotten logs at ankle level and knee-height, and one of the coral fungi has sprouted along the trail. Solomon’s seal berries have shed their floral husks. Leconte’s haploa moth and silver-spotted skippers are on the wing. White-marked tussock moth caterpillars are crawling over bridges and branches and hitch-hiking on sneakers. Black elderberry flower petals have fallen off as the berries begin to ripen, leaving inflorescence branches that look like circuitboards or neurons branching or the substructure of the tree of life.

Thursday I spent moss-collecting with Wayne Lampa at the Arboretum’s Spruce Hill, and it was dizzying. Black cohosh bottlebrushes were thick with flowers, and blue cohosh berries were blushing waxy blue. Loose-flowered sedge, which I’d never seen at the Arboretum, bore a few perigynia. Spotted St. John’s wort was in flower. But the show-stoppers were the mosses: pocket mosses and American tree mosses, flat-brocade moss, wavy-leaf moss, lesser smoothcap, two or three flavors of Anomodon. In a ca. one-inch-square area, I photographed the three genera Atrichum, Anomodon, and Plagiomnium, the latter with male gametophytes. There were mosses of rocks and of logs in the river, of dry logs stripped of their bark, of spongy logs, of bare soil, of tree bark near the bases of living trees and tree bark on branches that had fallen from the canopy. I am hard-pressed to say more now, as I do not have the new impressions of just having met mosses, nor the knowledge of having studied them long. I am just starting to learn.

The next morning, the 3rd of July, Rachel and I took Brooklyn to Maple Grove, and my eye caught a Crepidotus emerging from the same log where I’d found Cribraria last year. I leaned down to get a photo, and there was the Cribraria, right on schedule, with the Crepidotus flying above it like a flag. This is my second year finding it right before Independence Day, so perhaps I can count on it. If so, it’s hard to imagine a nicer emblem for the day than those two together in the woods.