Elm-leaf goldenrod is blooming, jumpseed fruits are starting to drop, red oak acorns are falling all over the woods. 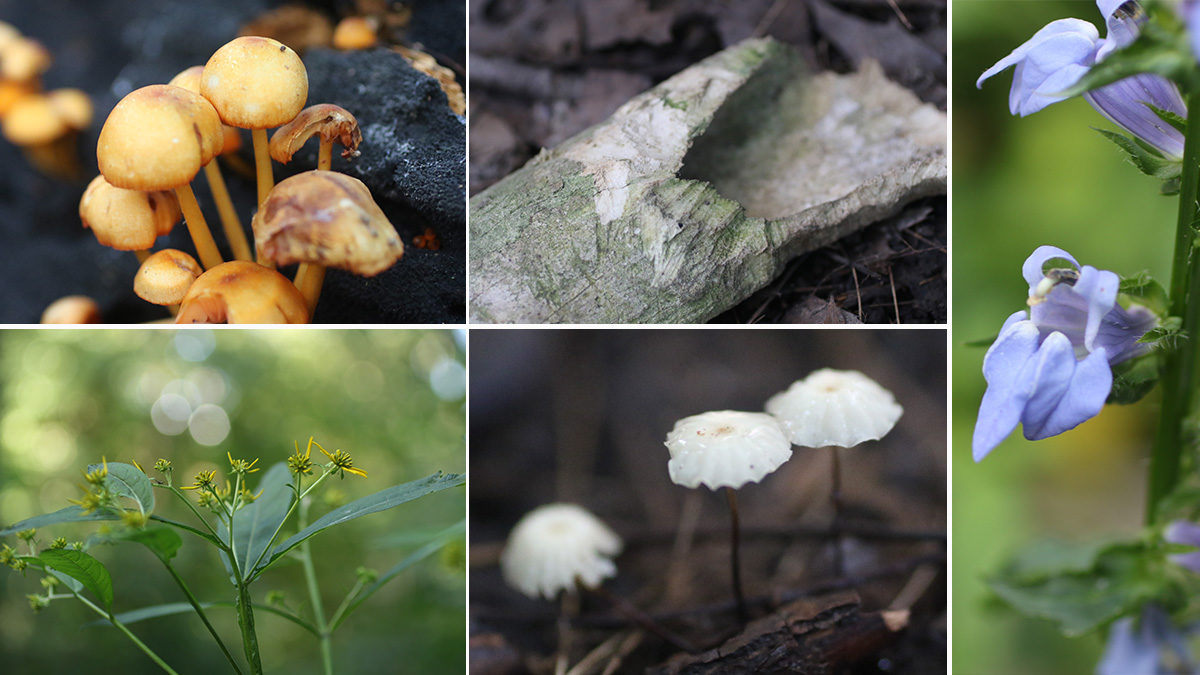 Tuesday night, our dog Brooklyn and I arrived at Maple Grove Forest Preserve at 7:30. Jumpseed fruits at the edge of the forest had ripened to the point that about a quarter of them sprung from the plant when I ran the inflorescence through my fist. Beggar’s ticks were almost ripe, sticking to the roughened tips of my fingers, with a single white flower at the tip of each inflorescence branch, a swollen ring of nectaries surrounding the mouth of the corolla. Jewelweed formed hummocks in the floodplain of St. Joseph Creek. A white-breasted nuthatch called. Crickets blasted from the tree tops. Brooklyn studied the water striders in the water flowing under the bridge, then barked at them, hair raised along her spine. She was on full alert.

Within the woods, where it was cooler and moister, the jumpseed fruits had not yet started jumping. Wild leek scapes emerged from the leaf litter like skeletons, the ripening seeds reminiscent of bony knuckles. Chicken of the woods was pumpkin-orange in the dark understory. Joe-pye weed flowers perched feathery and light atop towers of foliage. As the sun set, I started noticing mosquitoes. It quickly became too dark to get good photos without a flash or an exceptionally steady hand. An eastern wood-pewee called.

By 8:00, the crickets were singing continuously. Brooklyn and I passed a great blue lobelia at the edge of a marshy opening in the woods and headed up to the top of the hill. Burdock was in bloom. I had picked up a red oak acorn along the way thinking I’d float it out when I got home, but I realized on the way up the hill that some insect had gnawed the top out of it. I had hoped to find at least a dozen full, heavy fallen red oak acorns and float them out, see how many are viable now, but in the darkness I could scarcely find any. At the top of the hill, where the forest opens up to the lawn and parking lot, a cicada fired up in the canopy, the last of the evening, and warbled its spinning call dopplerlike until it rattled out of steam and was quiet. The pewee called again.

Turning back into the forest on the way down the hill, we were back in darkness. The mosquitoes became aggressive, swarming all around my face. Brooklyn started eating grass and panting. She gets nervous in Maple Grove. She was pulling on the leash and I was pulling back to slow her. We passed behind the Avery Coonley School, which was lit up for open house, perhaps. It looked like a school dance was going on, and there was music and noise from every window. Halfway down the hill, a great horned owl called. We kept walking, then it called from directly above us. Brooklyn stopped, looked up, then dragged me downhill. We raced through the marsh where meadow grasshoppers called and rice cutgrass pulled at our ankles. We passed the giant fallen ash where the sunny gap in the canopy pools with jewelweed. We passed the ephemeral pool filled with hop sedge, up to the trail, across the bridge over St. Joseph Creek, and back toward the car.

We were the only ones left at the parking log. The field pooled with mist leaking from the grassy slopes. The air was filled with cricket songs.

After work on Friday, about 4:30, we came back to do exactly the same walk. The mosquitoes were dormant. The crickets sounded anemic in comparison to their exuberance of nighttime. Nutlets on the musclewood were hard enough to break your teeth. White avens infructescences shattered easily between the fingertips. Elm-leaf goldenrods had come into flower and their leaves were excavated by leaf miners. Black snakeroot fruits were still hanging on… do they never drop? Again Brooklyn stopped on the bridge, poked her snout between the rails and barked at the water flowing underneath, hackles raised. Were there little fish in there? Water-striders on the surface? I looked with her but couldn’t see a thing.

In the light of late afternoon, the wild leek fruits looked nothing like skeletons. I hardly noticed them. The soil beneath the wild ginger leaves was crumbly and moist, worked over. Do earthworms favor the ginger? I came across greater celandine leaves but found that the latex has lost its color. Sugar maple seeds were strewn over the leaf litter, and I could find many more ripe red oak acorns this time. I gathered as many as I could carry in my pocket, focusing on the ones that appeared to be in good shape. From the trail, a cluster of orange mycena mushrooms stood out against the spongy rotten log on which they were growing. Elsewhere in the woods, there were deer mushrooms pushing up from the soil, and turkey tail fungus fringed the full length of fallen logs, bark still intact: perhaps in a decade or so these logs will be too rotten for turkey tail fungus, and the orange mycena and slime molds will move in. In rotting leaf litter were Marasmius capillaris, the most delicate of mushrooms, with wiry black stems and caps scalloped and glistening. At the edge of the trail, a six-inch section of the bone of a deer leg, I believe, was gnawed down at the ends by mice or squirrels in search of calcium. The marrow inside had been devoured.

Near the top of the hill there were wingstem and giant ragweed in bloom, white snakeroot still flowering–it’s been going strong for weeks now and is near its end–Joe-pye weed achenes darkening inside the heads, which are still being visited by bees; pale jewelweed bearing closed, cleistogamous flowers1 and open-pollinated flowers alike, with slug tracks across the upper surfaces of the leaves and, on some plants, galls hanging from the petioles2; late-season flowers on common agrimony and American pokeweed, which was largely in fruit; ripe achenes on hooked buttercup; flowers on clearweed and whitegrass, a less aggressive cousin of rice cutgrass. Black elderberries looked delicious, dark and glossy.

From the lower branches of a white oak at the top of the hill, near the parking lot and the picnic tables, where we had listened to the last cicada of Tuesday evening, an eastern phoebe was flycatching. It sallied out a few feet, grabbed an insect, flew back to the branch to wait for the next opportunity. After watching it for a few minutes, Brooklyn and I started back down the hill, and a glossy black cake of fungus on a log lying next to the trail caught my eye. It was a pearled wonder, like a fly’s eyeball. Had I never seen this thing? Assuming I have the family right (Hypoxylaceae is my current best guess), there are representatives sparsely everywhere in eastern North America. Another thing to watch for in late summers of the years to come.

Brooklyn was happy to get back to the car. When we got home, I started a pizza, skyped a colleague in Morelia (about oaks, of all things), and floated out the red oak acorns. Of 17, four sank immediately. By the next morning, only half were still floating. It struck me as not that bad, about 50% good acorns. The tree might see it differently however. All those acorns made, at such expense, that had no chance of growing. All the acorns I skipped because they were runty. All the acorns that were devoured on the tree, filled with insect eggs before they could grow, dropped hollow behind a trunk and became a home for mites.

When does the forest year begin? How many mornings are left? The September calls of great horned owls, the emergence of wild leek leaves in spring, yellowing of toothwort at the end of May, doll’s-eye berries ripening, the first frost. A door has closed. Another door has opened.3 Why not start the forest year this weekend, with the red oak acorns raining down to their various fates? I only tested 17. That leaves a lot back out in the woods that we can hope will be hardening off as seedlings this time next year, just in time for school to start again.

1 You can read more about cleistogamous flowers in jewelweed in my post A running description of the present, from June 23 of this year.
2 The gall is I believe from the gall midge Schizomyia impatientis.
3 “You ask yourself, How many mornings are left? / A door has closed. Another door has opened.” Paul Auster, 2012, Winter Journal, p. 230. Henry Holt and Company, LLC, New York.

2 thoughts on “Another door has opened”