Next to clouds
even a stone seems like a brother,
someone you can trust
— Wislawa Szymborska 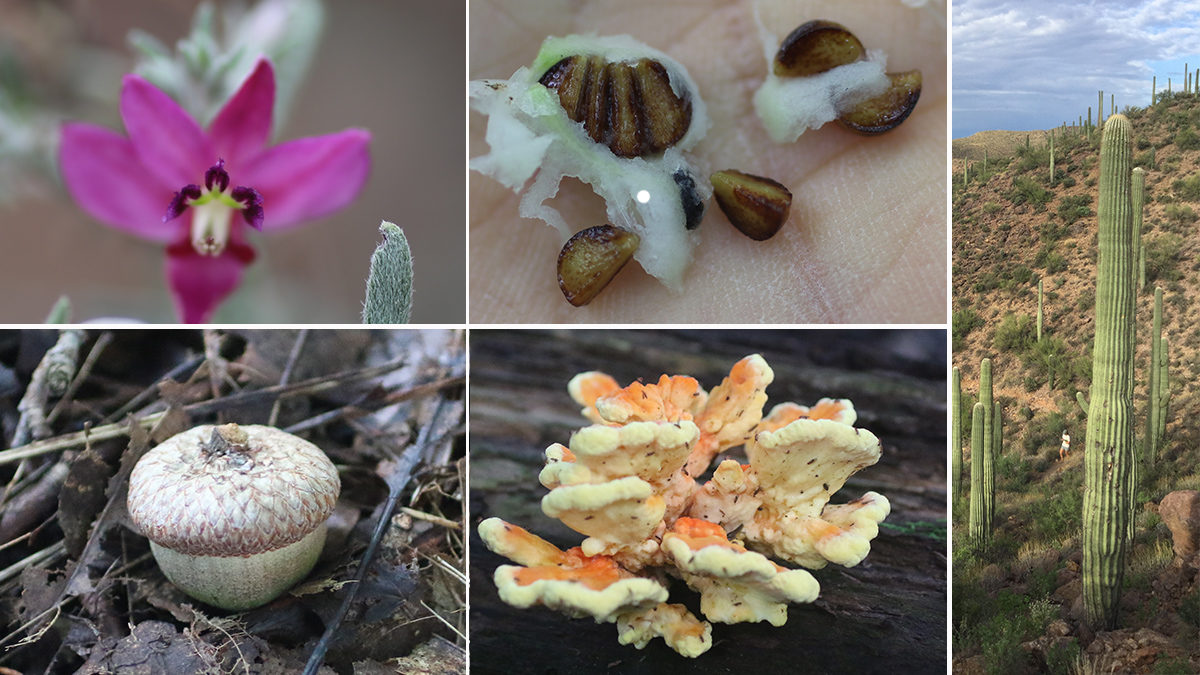 A month ago, the Tuesday morning that comes precisely in the middle of July, I arrived at the East Woods just after sunrise. The mosquitos didn’t strike me as too bad while I was tying up my bike, but walking through, I stopped to make a note, and my arms were suddenly covered with them. Rain was on its way, and with the falling barometer they were ferocious. My notes were illegible all morning long. “Circaea frs” I wrote, which is clear enough. But what can I make of the second half of that line, which appears to read, “phuptopastB still weifs?” When the mosquitoes are that bad, you don’t bother writing more than you need to. For the Circaea (enchanter’s nightshade) fruits, I do know what I was saying: they are filling out, getting downright plump and bristly, though some are still tipped with white flowers (“still weifs”). Wood nettle inflorescences were white and feathery, not open yet. False nettle inflorescences were erect, anthers just emerging. Sweet cicely fruits were as black as grains of wild rice, and some plants were starting to die back, and galls of Neolasioptera impatientifolia dilated the midveins of the pale jewelweed leaves. Woodland tick-trefoil was caught between blooming and fruiting. As I write this, nearly a month has passed, and it is still flowering and fruiting.

Basswood fruits were swelling, and the woodchipped trails were littered with fallen flowers. The mosquitoes were evidently still awful as I wrote that along “one stretch, woodchips were 50% Tilia flowers,” as there is a smear of blood across this note. American bellflower was in bloom, Joe-pye weed flowers were still not open. Black snakeroot fruits were hardening by now, releasing from the inflorescence readily, sticking to the band-aid on my thumb. Yellow violet capsules were almost all opened. Silky wild rye inflorescences were bristling with spikelets. Jumpseed fruits were still soft. Black elderberries were forming. The flowers were falling to the ground.

Two mornings later in Maple Grove, the wild leeks were straightened out from their arching of two weeks earlier, inflorescences expanding, though the flowers were still not open on most. Water plantain leaves had emerged in the ephemeral pond, and there were white jelly fungi on the fallen rotting logs. Honewort fruits were rubbery and there were red oak shoot tips scattered on the forest floor, bearing aborted acorns. Chokecherry fruits were ripe. At work, the East Woods were starting to wake up to the glory of woodland sunflowers. Crownlike fruits were growing on agrimony, white avens burs were as big as marbles, lopseed fruits were all reflexed but not ready to spring off yet. Joe-pye weed leaves were all mined and chewed and rolled, so you could hardly imagine they were doing the plants any good. The bottlebrush grass spikelets were thick and brittle and scattered at a touch. False Solomon’s seal infructescences were heavy with ripening fruit. Walnuts that two weeks earlier would have been about the size of the overgrown shooter marble my great grandpa gave me when I was young had grown as large as apricots. Nettle-leaved vervain was lit up with tiny white flowers. That evening, I returned to Maple Grove to find the canopy gauzy with cicadas. White snakeroot had come into bloom — possibly that very day? The first leaf-miner traces had appeared in the evergreen leaves of white bear sedge. Wild leek, which I swear had barely been in flower that morning, stood out like a colony of mushrooms. A solitary blue cohosh fruit was bright blue; the rest were hazy. Stickseed had started to flower.

That weekend and the entire next week were filled with work and with evening walks with the boys and the dog. I cannot tell you what I saw that week, if anything. The weekend, through Sunday when I left for the cab, I worked on my talk for the Botany conference. The next day, the last Monday morning in July, just after midnight, I arrived in Tucson, slept a few hours, and then took a cab to Starr Pass for the conference with a graduate student from my lab. I had been seeing tweets of the flora for several days, shots of saguaro cacti out of hotel windows, but I wasn’t prepared for it. The landscape was otherworldly, rock and hills covered with 15′ tall saguaros, prickly pear cacti in fruit. Only 6,000 years ago there were camels here, and they and the ground sloths ate these spiny things. There were Zygophyllaceae, Malpighiaceae, Simmondsiaceae, families you run across relatively rarely in Downers Grove. There was dragon’s blood, a Euphorb named after the color of the latex. I’ve inspected its DNA sequence, but I’d never seen it. After a rain one afternoon, the hills were redolent with wet creosote. There were wolfberry and paloverde, barrel cactus and choya, ocotillo, Haplophyton, mesquite, Parkinsonia, fairy duster, rock hibiscus. The second morning of the conference, a friend accused me, “You didn’t tell me Celtis pallida was growing along that trail!” I had to confess that I didn’t even know the plants, and went back to see it. It’s a shrub of a thing, delicate, not something I would have recognized as a hackberry. That is the way with oaks down here as well: you have to relearn the woody plants you thought you knew as you move into the southwest and Mexico, because they have learned new tricks and don’t look so much like their cousins in the east. Black-throated sparrows called like mechanical, efficient song sparrows. There were black-tailed gnatcatchers. If we had been there at the right time, we might have seen white-winged doves with their faces buried in the saguaro flowers, faces covered with white pollen.

Each morning we hiked, each day we listened to talks. The origin of land plants. The evolution of Viburnums and basswoods. Application of machine learning to plant science. On the last morning walk I learned about the two species of woodpecker that specialize on the tops versus the bottoms of the saguaros. That evening, we talked about how we can train our students to be scientists outside the academy, to make careers of their PhDs in a world where the number of smart, hard-working PhD-trained plant biologists far exceeds the number of academic jobs. That’s a lot of landscape to cover in 15 hours.

On the flight out of Tucson the next morning, the rising sun cast the mountains into sharp relief beneath clouds spread thin like cottonwood seeds on a stream. Images and sounds from the preceding days elbowed each other on their way to my prefrontal cortex. The cactuses mixed with the phylogenies, the song of the black-throated sparrow echoed over a lecture about trait relationships in the Wisconsin flora. By turns, these moments all stood clearer against each other, like the east and west faces of the Tucson mountains as the sun rises and the doves call; then they faded into one another. Viburnums radiated in parallel on their way down to Mexico, sneaking between the saguaros outside the lecture hall. Jojoba fruits drifted across screenshots from a database that holds plant records from Peoria and the Chiracahuas. As we flew over the Great Plains, the clouds tumbled like cotton batting, “cruis[ing] smoothly over your whole life / and mine.”1 Roads and fence lines were etched into the soil at right angles, broken by gallery forests. A bridge cut across a stream. One field abutted another, contrasting colors. The conference and the hikes were juxtaposed, then blended together and, as we touched down, separated cleanly from the woods I hike each day.

So much more has happened in the past month, with our long hot days, and even more that I’ve missed. One morning at the end of July, woodland sunflowers started coming into bloom in the East Woods. Sometime around the beginning of August, I realized the robins weren’t singing in the morning anymore, that they’d been replaced by cardinals. Did they pass the baton one morning while I wasn’t paying attention? In the past two weeks, Solomon’s seal berries, doll’s eye berries, lopseed and agrimony fruits have ripened, and bur oak acorns are swelling in the East Woods. Last night there were white jelly fungus and chicken of the woods on the rotting logs in Maple Grove Forest Preserve, wild leek and black elderberry fruits ripening, wingstem and cutleaf coneflower blooming, a fallen red oak acorn that looked full and healthy but was rotted inside.

As I write this, lightning is striking within an eighth of a mile of our house, rain is falling hard, and the dog has snuck onto our bed to sleep off the dash we made home in the first downpour of the morning. We still have a month of summer to look forward to.

1 Excerpts from Wislawa Szymborska, “Clouds.” In: Monologue of a Dog, 2002. Translated from the Polish by Clare Cavanagh and Stanislaw Baranczak, 2006: Harcourt, Inc., Orlando.

2 thoughts on “Next to clouds even a stone”