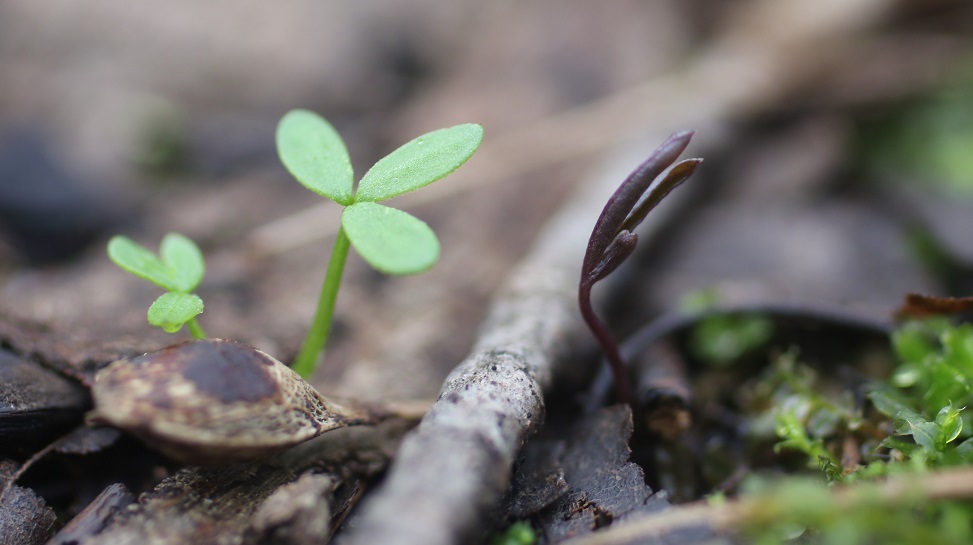 Juncos have been trilling and buzzing noisily across the trails this week as they prepare to fly north. They’ll be pushed out soon by chipping sparrows. On Thursday, one or perhaps two white-throated sparrows were singing down by the path in Lyman Woods, along the southeast edge of the marsh. Killdeer were singing. The chorus frogs were dragging their songs out long and slow. I noticed my first song sparrow of the season as I walked north through the Lacey Creek neighborhoods, past a yard filled with tree moss that I’d overlooked for months. It seems every spring there is one walk when I realize only halfway through that I’ve been hearing song sparrows. There is something about their bouncing song that is too casual, familiar, and I overlook them at first, then realize they are back in town. Perhaps I’d been hearing them all week long without registering them. Jay Sturner reports hearing one at the Arboretum on Tuesday, so they’ve been in town at least that long; he tells me too that some overwinter, but that the ones we are hearing now are probably migrants. Last year, in our interrupted and dragged-out pandemic spring, I did not notice one until early April, and then only as my son and I were biking over I-355. We are still interrupted, I know, but a year out, things are not as bad.

It wasn’t just song sparrows new to the year on Thursday: that was the day that it seemed the earthworms all woke up. There have been baby earthworms writhing beneath the leaves for at least a couple of weeks, beside the millipedes and sowbugs, the Collembola and false mermaid seedlings. I imagined the adults were all up too, but it seems that the baby earthworms are like young children on Saturday mornings, awake before the grown-ups, rummaging around downstairs, getting cereal and watching cartoons, horsing around with the dog. Because when I arrived Thursday, suddenly the trail into Lyman Woods was a minefield of earthworm middens, leaf bases dragged down into the muddy path forming plugs of left-overs, stopping up the holes the earthworms scrambled down into. Only a good-sized worm can do such things. There were fresh earthworm castings about a half-inch tall.

This week, spring beauties turned into teenagers, lanky and hanging out in packs at the bases of the trees. They are not social-distancing. Chives are shin-high. Irises are spearing their way up through the matted leaves alongside the ditch running down toward the Lyman Woods marsh. Cottonwood buds are expanding, boxelder and sugar maple floral buds swelling, elms flowering on all the neighborhood streets. Basal rosettes of dame’s rocket—which I have always assumed was native to the UK, but learned this week in Richard Mabey’s wonderful book Weeds is a weed there, too, from the Mediterranean—turned a brilliant green in anticipation of the damage they’ll do in the woods this summer. Garlic mustard is greening up as well. Wild onions are forming sparse lawns four to six inches tall. Wild leek leaves have expanded to the size of dogs’ tongues. Sprengel’s sedge is resprouting from burnt-off crowns. Everything is sopping up the sun before the leaves come out.

On our walk before lunchtime on Friday, Brooklyn and I heard our first spring peeper of the year in the pond below The Avery Coonley School, scraping bottom and clearing its throat as the first peepers of the spring do. These first ones are solitary singers, trying the air after the chorus frogs have been going strong for a few weeks. They always sound to me as they were rubbing their thumbs over a taut, wet balloon, squeaking and noisy, voices cracking, a little incautious. I always doubt myself: is that really a spring peeper? Yes. There’s nothing else it can be, and within a week or so they will all will be singing together, noisy, voices carrying to the top of the hill and then dropping off abruptly as you climb down the other side, and by 200 feet you may not even hear the din of the frog population that was deafening when you stood in its midst.

I sometimes think I might not get back in the habit of visiting Maple Grove. I had thought until a couple weeks ago that I was perhaps done with the place. But the past few weeks, with everything happening again in the woods, I’m drawn back to it, as many of you reading this are. I’m reminded of Michael Longley, who said of his land in Carrigskeewaun that he would sometimes think he’d written his last poem about the place, and then he would find that another poem was waiting for him there. There is always something waiting for us at Maple Grove if we have time for it. As of this morning, the shoots of Davis’s sedge and hairy sedge are over an inch tall. False mermaid petioles have extended and pushed the leaves up over the top of the leaf litter, where they are beginning to spread out. The first leaves of Sanicula are up. Sporophyte capsules on baby tooth moss have gone from slender and straight as pencil-tips to bent over and plump, filling with pressure and ripening spores. They’re one of the most common mosses on rotting logs in Maple Grove and very obvious right now. Flat brocade moss is beset with thread-slender stalks, bearing barrel-shaped sporophyte capsules. White trout lily shoots are coming up under the leaf litter. Toothwort has pulled loose from the soil and is on the cusp of full-blown, leaves-out childhood.

Brooklyn and I ran across two really beautiful shelters on our walk this morning. We crossed over the burning husk of a dead white ash, smoldering from a prescribed burn of this past week. As walked the length of the woods, I thought of a passage I read this week on how much oak forest it took to build a ship in early 19th century England, from Charles Mosley’s 1910 The Oak: Its Natural History, Antiquity and Folk-Lore:

It takes fully 150,000 cubic feet of timber to build a seventy-four-gun ship; and allowing upon an average that the trees in an oak forest, when arrived at maturity and ready for shipbuilding, stood at the distance of about thirty feet from each other, we could only have about fifty trees from an acre; and supposing that the same trees were from 100 to 120 years old, there would probably be about 70 feet of timber in each at an average; consequently, we see from this calculation, which is pretty near the truth, that no less than the matured crop of 44 acres of woodland, or 2,200 full-grown trees, are required for one such ship.

That means we could have two ships, at the cost of our 80-acre Maple Grove. I’d rather have Maple Grove; plenty of others would rather have the ships. Either way, it’s heart-breaking to think of.

On our way out, Brooklyn and I passed our first floral buds of the year on false rue anemone. They may be in flower by the time you read this.