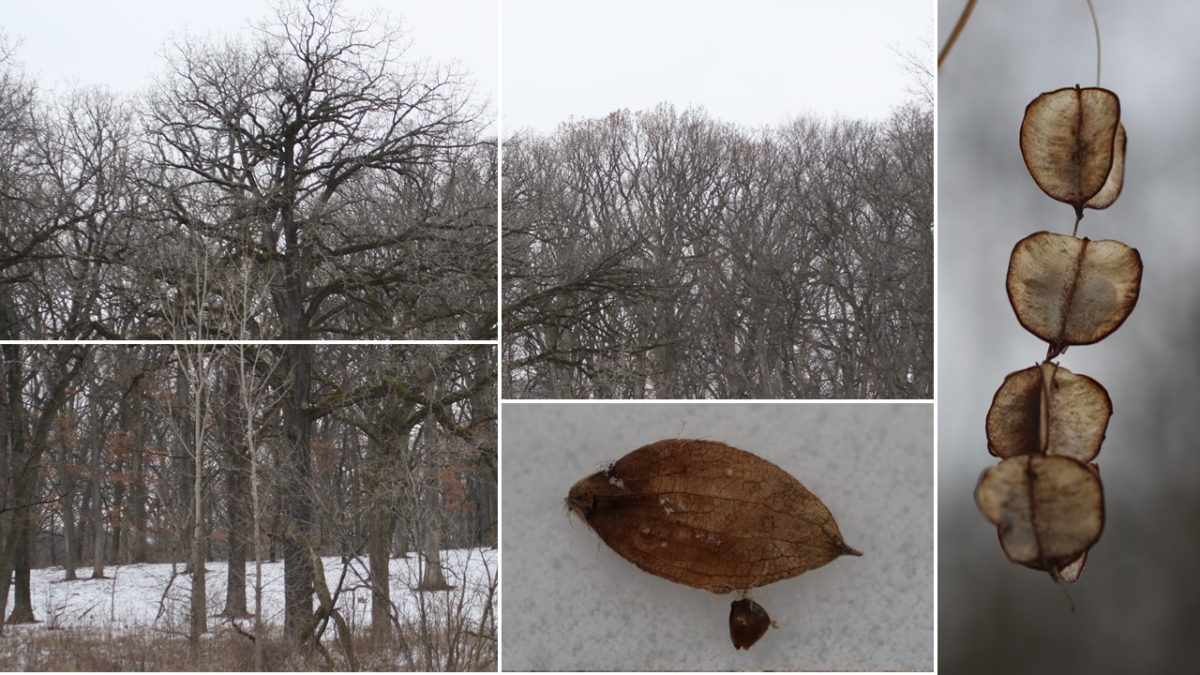 The last Saturday morning in January, the snow in Maple Grove was wet and eroding, pocked by thick rain. The ironwoods in the midstory were marcescent with finely toothed, nut-brown leaves that filled the branches of the tiny trees and could be seen throughout the woods. The musclewoods standing at the northeast entrance to the preserve were hanging onto their senesced leaves, which were translucent, sparse and unevenly distributed along the branches. In some trees, they were curled along the lowest limbs; in others, they were arrayed mostly along one edge. The fine distinctions that separate these two species originated an estimated 9 to 30 million years ago1, yet the two look like cousins, one patrolling the interior of Maple Grove, the other leaning by the entry. They look more like one another, to my eye, than modern humans look like chimpanzees.

The snow was soggy and took stains more easily than usual. It pooled in slushy depressions and where water ran across the trail, and there it was dark with clay and secondary compounds from fallen leaves. An asymmetrical corona of discolored snow encircled the bases of many of the oaks and maples. I had seen this before and chalked it up to the effects of water running down the trunk, thought nothing more of it. On this walk, however, I had the benefit of having Brooklyn, our dog, with me, and she was a reluctant walker. So I stood longer than I usually do, waiting with her, considering the pattern.

As I looked at tree after tree, I gradually realized three things. First, the asymmetric stain around the bases of the trunks did not seem to be associated most strongly with where the snowmelt was trickling down the trunk, but rather to fall more as shadows would, cast by the inclining trunks. The more canted the tree, the more asymmetrical the discoloration. Second, the stains did not just fall under the trunks: they also ran laterally away from the trees where there were low-hanging branches overhead, as though coloring had been dripped from the branches. Third, the stains were much stronger under the sugar maples than under any other trees, and the lateral streaks in particular seemed to be limited to the maples.

We had been suffering the normal freezing and thawing of a northern Illinois winter, when I would expect the sap to run, and these observations in combination made me wonder whether what I was observing was in fact exudate from fissures in the bark, forced outward by a combination of root pressure and the changing internal pressures of the tree as temperatures fluctuate and the sap alternately shifts back and forth between liquid and solid. When daytime and night temperatures cross the boundary between freezing and thawing, sugar maple sap tends to run more freely2, and this effect may be enhanced by rain3. I tasted the snow beneath several maples, hoping for dilute sugars, but I could not detect a difference in taste. It is possible that all I was seeing was the discrepancy in color of snowmelt off the bark of one tree versus another, though if that were the case, I would expect the snow beneath the oaks to be more strongly stained, as their bark has a relatively high tannin content4. I obviously have more watching and reading to do.

The narrow sugar maples scattered in the woods are prominent now against the snow. Many have cankers like swollen knees, trunks as big around as large zucchinis or watermelons tipped on end, bark curling around the edges of the scars as though to fill them in. You see a few great trees in the woods that have grown around their cankers, and some wear the old wounds well. Many trees, however, appear to have been killed by the fungus, Eutypella parasitica5, before they can grow much more than a foot or so in diameter. Then they stand dead and their bark is stripped off down to their shins, and they are polished by the elements and become like walking sticks jammed into the forest floor, but never returned for. I am just learning about this now–how, I ask myself, am I just learning about this now?–so I am not yet certain that every cankery tree I’m seeing in Maple Grove is a sugar maple. But many I am certain of.

There are chickadees and juncos singing in the woods and neighborhoods, and a fox passed the neighbor’s yard the other morning while I walked the dog. The neighbor’s chickens didn’t say a word, and the fox paid them no mind. Perhaps our neighbor has gotten rid of the chickens. The ice on the road comes and goes. The snow thaws to slush during the day, then freezes each footstep into raggedness by night. Frost settles on fallen logs and drips down the north face, where it freezes into a clear glaze; on the south side of the logs, the skim of water bleeding down is burned off by the sun, and that side is dry. The sun bakes the south-facing roof of our house dry. The north side still has a smear of greasy snow. The forest is by turns melting away and freezing in place.

Tuesday night, the dog and I took a walk in Maple Grove as the great horned owls were calling. Now that I have seen them once, I notice what I believe to be maple cankers everywhere. Some are the size of grapefruits. Some are ten feet long and start twelve feet above the ground. One tree is as big around as a city-street trash can and hollowed out with rot, inrolled bark framing the yawning mouth of the trunk, the interior streaked black with fungus.

The snow has had a few more days to melt and thaw and become icy, and it draped like chain mail over the logs. The sun was going down as we walked through, and the stains beneath the trees were predominantly under the white oaks, not under the maples. Was I misremembering? I looked for the same musclewood I had seen on Saturday, just from the opposite direction, and through the woods I could not see it. The snow had been flipped upside down in a band running 10 feet out from the trails, as the squirrels turned over every leaf in search of acorns. In a few days, almost nothing had changed, but the few things I’d been fixated on had shifted under foot.

… There is, it seems to us,
At best, only a limited value
In the knowledge derived from experience.
The knowledge imposes a pattern, and falsifies,
For the pattern is new in every moment

This afternoon there were ironwood fruits scattered over the snow in the Arboretum’s East Woods, papery wild yam capsules hanging from the vine, stick-tight achenes of white avens on stiff stems leaning over the snow. The snow beneath a black oak was stained dark brown from the decomposing husks. Squirrel excavations were everywhere. The trails were icy, and the dusting of snow over the top captured squirrel tracks perfectly.

I’ve had this experience often before, of thinking I’ve found a pattern, then disbelieving it, then realizing over time that some pattern was real under what I’d noticed the first time, but not what I’d thought initially, more nuanced. We all have. The habit of science is the conditioning of one’s mind not to settle on spurious patterns, to recognize when the pattern has congealed. We may we do this quantitatively, or we may cultivate habits of mind that make us wary of our false beliefs. Either way, it seems to be a week of both watching for patterns and watching out.

2 thoughts on “The pattern is new in every moment”