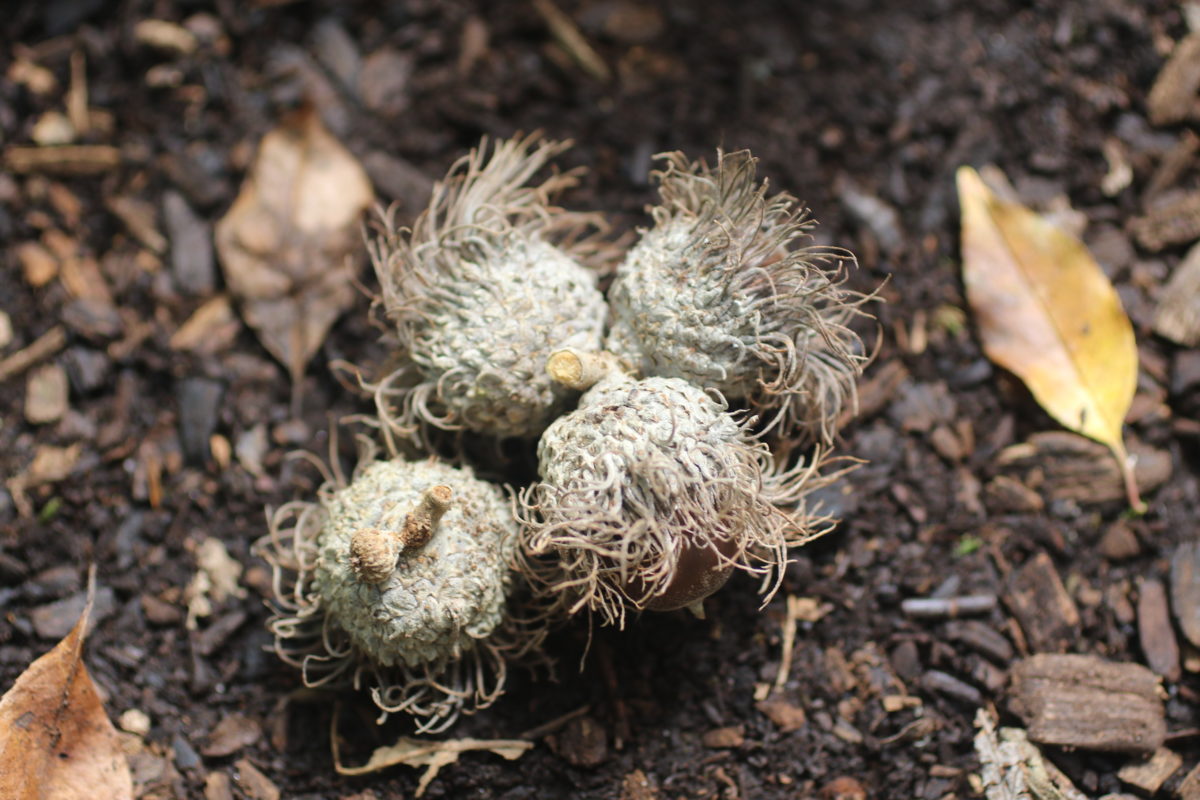 If you are a human collecting acorns, the deck is stacked against you. Every creature in the woods wants them, and most balanophiles are more nimble than we. In North America, we often think of squirrels as our primary competitors, and they are of course efficient: acorns scarcely drop before they are scavenged and cached, and many are collected straight from the trees. The chipmunks I suspect are nearly as efficient, if smaller. But there are also jays, turkeys, rabbits, raccoons, opossum, deer, mice and voles, a host of others. This diversity of acorn-eaters shouldn’t be surprising. Acorns are tannin-rich, which is a barrier to ingestion, but they are energy-rich as well, almost 90% carbohydrates by weight1. Humans have as far as I know no adaptations for dealing with the tannins in the acorns, but even we can eat them with a modicum of processing1. Hominins have been in fact been processing and eating acorns since at least the mid-Pleistocene2, roughly 600,000 years ago before the origin of modern humans. Imagine how much more we’d eat them if we were out there all the time, living among the trees, keeping track of this particular mother oak, and that one over there that did so well the previous year.

This past week, two of my colleagues and I collected acorns from bur oaks in several DuPage County forests for an experiment we are planning. We found that we were about one week later than we ought to have been, which I had feared we would be. On Monday of the previous week, I had been seeing the first good bur oak acorns drop. Prior plans got in the way of collecting: the next day I was on a Cessna 8-seater over Buzzard’s Bay, heading to Polly Hill Arboretum to speak about the 56-million year history of oak evolution, knowing full well that the acorns were dropping in earnest back home. By the time I could get out again a week later, the best bur oaks had already been pillaged: the fullest fresh acorn caps were empty, and almost every nut from the present year was about a nickel in girth. Fresh caps as big around as 50-cent pieces lay on the ground, every last one of them stripped of its seed. Moreover, there were many fewer good acorns to begin with than there had been in 2018, when I easily found good acorns in abundance under many of the oaks in each population I visited. The largest difficulty had been identifying trees that were sufficiently separated from each other that I could tell who the mother was for each acorn. This year, I found scores of oaks with only one or two acorns beneath them, but 100s of the previous year’s acorn caps.

But it’s not just the squirrels and chipmunks you have to watch out for, and perhaps not even primarily. Anyone who has collected acorns has at least once brought home a bag of them only to find the bag crawling the next morning with larvae. This year, many of the acorns we collected had tiny orange wrigglers underneath the caps. Those seemed to be fine: we could wipe the larvae away, and I was grateful we caught them before they could do more damage. But at one site, every second or third acorn had a black scar at the base, cracking open the acorn cap and the wall of the nut. These we discarded. At others, almost every acorn was sodden and easily crushed in my hand, filled with frass, presumably from weevils. Many had a hole in the side where an insect had chewed its way out. It is remarkable to think how many acorns must be produced in a good year that we humans would never have a chance to get our hands on. We couldn’t possibly be quick enough.

Saturday afternoon, Maple Grove Forest Preserve was glazed with rainwater. It was coming down episodically, but St. Joseph Creek wasn’t high yet. The creek is very flashy, and with a little downburst it swells, and with a little more it’s eager to overspill its banks. Wild leek seeds are mostly exposed now, pearly black inside the torn white sheaths. Doll’s eye berries are still bright white and clinging to the inflorescence axis. They seem to me to be ripe. Are they waiting for something? Are they really not ripe yet? Or do they perhaps just not taste as good as the other berries, so don’t get eaten as readily? Perhaps their elevation on tall talks makes them inconvenient for mice, voles, raccoons who might otherwise abscond with them. By contrast, Jack-in-the-pulpit berries at shin height are essentially gone. So are the false Solomon’s seal berries. Black snakeroot burs seem finally to be falling of their own volition. I’ve been impatiently breaking them up and scattering them as I walk by for the past month, but now they appear to be shattering on their own, or getting dragged around by passing mammals, presumably not all of them botanists. Jumpseed in the deepest parts of the woods have been biding their time for weeks, still putting resources into their seeds, but now when I touch them the reflexed fruits spring off into the surrounding foliage. I wonder why I don’t see whole gardens of seedlings beneath each plant in the spring? It may be that the seeds are tasty and get moved around by rodents or insects. It may be that they have low viability. Or it may be that I just haven’t been noticing the seedlings. I’ll keep an eye out in the spring.

Ghost pipes are ripening, turning their faces to the sky. Aborted entoloma, which I started noticing a week ago, has appeared everywhere now, like loaves of gnome bread leavening in the leaf litter. It extends at least from near the backyards at the northwest corner of the forest to the north-facing slope leading down from the picnic area by the parking lot at the south end. From what I’ve read (see last week’s post for references), the presence of the aborted entoloma makes me think that honey mushroom mycelia, Armillaria mellea, are everywhere as well. Stump puffballs are starting to go to spore: some are brown and dry inside, others are still white but granular. Earth stars have appeared along the trails. There is a patch of chicken of the woods on a standing dead ash, about 40 layers of soft, orange shelves. They smell amazing. These too leave me wondering how widespread the mycelia are. If I could strip everything from the tree but the mycelia, what would I see? There is a tool for visualizing mycelia on a small scale using florescence in situ hybridization3; could we do it on a large scale? How would our impression of the woods be changed if everything were dissolved but the fungi for just a moment? Even the non-fungal bits of the soil? We might find we were standing on a filamentous cloud that runs everywhere, places that even plant roots can’t go, tying them all together4.

On the trail that runs past the backyards on the west edge of the forest, I looked closely at a sugar maple. Earlier in the week I had started picking through The Hidden Life of Trees5, in which the author, a forester, discusses aging a tree that was less than an inch in diameter but turned out to be roughly 80 years old. It has been years since I was in the habit of counting growth rings on sugar maple branches, a practice inspired by conversations with Virginia Kline about her research in the Kickapoo River Valley6. I had forgotten how old they can be. I counted growth rings on this tree and found that a lateral branch about one and a half times as long as my middle finger and only a few millimeters in diameter was eight years old. That’s a remarkable amount of time to spend growing so little, a testament to what a maple can put up with.

I walked off-trail toward the middle of the woods and came across a dusting of bur oak leaves peppered with last year’s acorn caps and a few of this year’s caps, nuts gone. I found two with intact nuts. One was in fine shape, and I left it to germinate or get eaten. The other was split into three partitions at the stylar end, revealing a small pearly radicle, about half as large as a grain of rice. The flesh exposed between the cracks in the acorn wall was partly eaten by insects, but I think this one might have a chance. It’s the first bur oak I’ve seen germinating this year. Unlike sugar maples, bur oaks can’t tolerate many years in the shade. I see the seedlings in the understory every once in awhile, and they are rarely over a couple of years old. Beyond that, the cotyledons have nothing left to give, and the shade wears them down.

But perhaps this tree knows what it’s doing. Perhaps a squirrel will move this nut to a nearby opening and somehow not break off the growing root. I set it back in the soil right where I found it and hope for the best.

1 Cameron, Roderick. 2019. Eating Acorns to Save the World. From the International Oak Society Blog, 2019-08-07, accessed 2019-09-22. url: https://www.internationaloaksociety.org/content/eating-acorns-save-world
2 Chasse, Beatrice. 2015. Eating Acorns: What Story Do the Distant, Far, and Near Past Tell Us, and Why? International Oaks 27: 107–135.
3 NAKADA, Yuji, Satoshi NAKABA, Hiroshi MATSUNAGA, Ryo FUNADA & Makoto YOSHIDA. 2013. Visualization of the Mycelia of Wood-Rotting Fungi by Fluorescence in-Situ Hybridization Using a Peptide Nucleic Acid Probe. Bioscience, Biotechnology, and Biochemistry 77: 405-408.
4 If you haven’t read about Suzanne Simard’s exciting foundational research on how fungi facilitate movement of nutrients between trees, even trees of different species, check out her TED talk: How trees talk to each other.
5 Wohlleben, Peter. 2016. The Hidden Life of Trees: What They Feel, How They Communicate―Discoveries from A Secret World. Greystone Books.
6 For Virginia Kline’s doctoral dissertation on the Kickapoo River Valley and a host of other slides and documents from her life’s work, see https://uwdc.library.wisc.edu/collections/econatres/klinev/.

2 thoughts on “If you are a human collecting acorns”