In the warm 2 weeks since the solstice, spring beauty, mayapple and false rue anemone have been pushing their way up under the leaf litter, along with the evergreen sedges and mosses I expect to find this time of year. 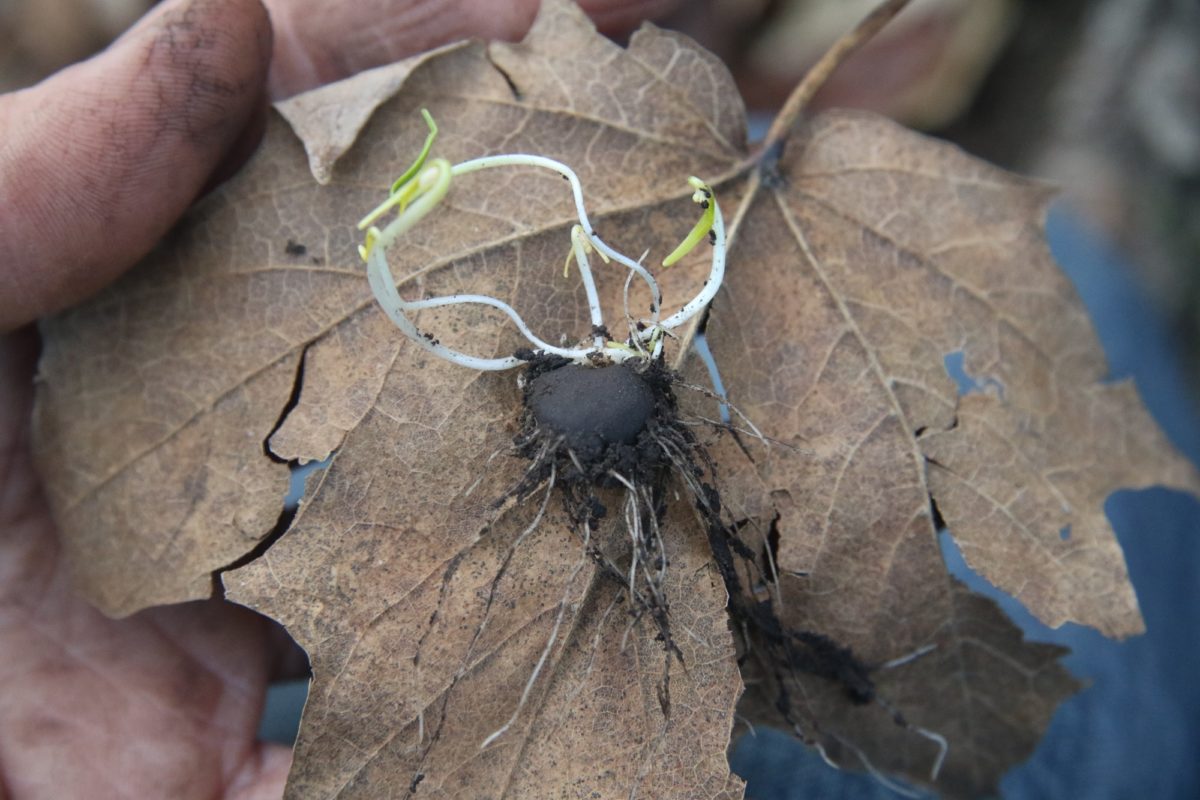 The afternoon before the winter solstice was warm and foggy, and it seems the unseasonably warm weather of the week or so before had tricked the spring wildflowers into action. Bullet-shaped mayapple (Podophyllum peltatum) less than a centimeter high and sprawling, partially etiolated shoots of Virginia spring beauty (Claytonia virginica) were hiding under leaf litter at the base of the red oaks. The spring beauty particularly surprised me: the straplike leaves are unmistakable, and with them were the floral buds curled up like tiny fists, bunched together. I went back a week later and found them still there. Is this typical? Do spring beauty and mayapple typically persist under the snow all winter long? The husks of stump puffballs that I first noticed in August had turned honey-brown; fungal mycelia were frosting the woodchips underneath the leaf litter; a great horned owl was calling from the north edge of the woods. The brightest green in the woods was the moss (Entodon seductrix) covering a cut stump alongside the trail.

A Virginia opossum was patrolling the oak collection. I saw her from 30 feet off waddling behind one of the planted oaks and ran to get a photo, thinking she would race off. Instead, she climbed up the oak to eye level and watched me, casually, just keeping an eye on me. I got within about 5 feet and stopped shooting photos so I could get a proper look at her. She was in beautiful shape. I confess that opossums scare me a little: those sharp little teeth, and so many of them; the naked, ratlike tail; the divots out of their ears where they’ve been frostbitten and don’t even seem to mind… they’re tough animals! But this one was lovely, and it’s changed my thoughts about opossums a bit.

Temperatures dropped for the next four days, and Christmas eve day there were ice crystals 2 mm long in the upper layers of exposed soil at Maple Grove Forest Preserve. Oak leaves were frozen into a mat, but the soil beneath was merely cold, pliable like clay. Just after lunch, the soil in our garden was still frozen in the upper layers in the shady parts, mostly thawed in the sun. I turned over a four-by-four-foot section of garden and planted four rows of garlic that we had meant to plant two months ago. I mulched with pin oak leaves and leaves from our apple tree. Too tannic? perhaps… I never mulch the garden with oak leaves, but this year we had no straw left over from Halloween.

Since Christmas, temperatures have ranged from the high teens to the low 50s. The days are only 10 minutes longer than they were on the solstice, but cardinals have been singing as late as 9:30 in the morning. Orion is rising over the horizon as the sun goes down and stands upright in the south by 9:30 at night. Saturday morning it was just below freezing when Rachel and I took the dog to Maple Grove Forest Preserve. We found fiberlike ice crystals about an inch long just under the soil’s surface, cylindrical crystals packed together like bundles of straws, clear, pushing clods of soil up to make a ragged, brittle surface. By the afternoon, temperatures had risen to over 50 degrees. A small swarm of some species of gnat or midge (I think; I did not succeed in grabbing one or getting a good photo) was bouncing over the bridge through the margin of floodplain forest along St. Joseph Creek. For several minutes they traced a slender ellipse up and down over the handrail, sparkling like flecks of snow in the setting sun. The underside of a brick of rotten wood was glazed with minute frost crystals, but the ice crystals at the soil surface had mostly collapsed. At the bases of the trees, under dried piles of maple and oak leaves, full-sized centipedes tunneled through lawns of earthworm castings alongside mites and pill-bugs. Almost every spot where I pushed aside leaves, whether dried up at the bases of the trees or limp and matted over the soil surface, I found earthworm castings and centipedes. The centipedes must be active throughout the winter, any time the temperature rises, like the mourning cloaks who lie in wait under the bark or in crevasses of trees for the first warm days of spring, and emerge fully formed, ready for action.

There is more to see in the understory than I had expected. Evergreen sedges I knew I would find: Carex blanda, C. jamesii, the broad-leaved C. albursina, and most of the other woodland sedges maintain their late-season foliage under the snow throughout the winter, presumably photosynthesizing when they can. Carex sprengelii appears to be an exception to the rule, as the one in my garden is only a pale green at the base right now. The evergreens also include Hepatica, white avens (Geum canadense), many of the woodland ferns, and a few other understory herbs. These were no surprise. But two spring wildflowers I had not expected were also coming up: hidden in the white oak leaf litter was a fully developed leaf of false rue-anemone (Enemion biternatum) and the exposed bulb of another Virginia spring beauty, shoots emerging serpentlike from its crown. Again I ask myself, is this the norm? are there always spring herbs emerging in December and January? are the plants that emerge just in warmer spots? predisposed to earlier growth? a hair shallower than their classmates? just lucky, or unlucky as the case may be? And will the particular plants I’ve found survive to March, when I expect to start seeing them? I need to get some twist-ties to mark these plants for a revisit.

One small area of the forest floor was cleaned of leaves, exposing a clone of wild ginger. Scratched with a thumbnail, because I wasn’t certain I had the identification right, the rhizomes were pungent. The prostrate stems were tipped with leaf scales about the size of a fingernail; the lateral shoots were the size of a pencil eraser or perhaps a bit longer. Laid bare like this, the clone was easy to follow, rhizomes surfacing here and there like segments of a slender, many-armed creature swimming beneath the forest floor.

Further on, a large sugar maple had fallen onto the forest floor. The whole tree was spongy, soft and soaking wet, rotten brown. It was topped with a healthy, fresh-looking moss that was bristly with sporophytes. I presume these had opened in 2018, sending the spores off to the wind while the stalks (formally, setae) and capsules remained, like marcescent crabapple stems in midwinter. At one end of the tree trunk was scat of what I suspect was a red fox, nestled in fissures in the bark right at the broken base of the tree. Near the middle of the trunk was the husk of an acorn deposited, most likely, by a squirrel after eating the nut out. At the far end was a particularly fresh patch of orange mycena mushroom, as fleshy as if it were a rainy week in early September. Were they persisting all the way from late summer? or newly emerged from the rotten wood in an unseasonably warm week? On the hike out, I heard a great horned owl call.

In his essay “The Pleasures of a Naturalist,” John Burroughs wrote: “But the naturalist finds his pleasures everywhere. Every solitude to him is peopled. Every morning or evening walk yields him a harvest to eye or ear. The born naturalist is one of the most lucky men in the world. Winter or summer, rain or shine, at home or abroad, walking or riding, his pleasures are always near at hand.” I sometimes tire of quoting John Burroughs, but honestly, I don’t think anyone says it better than he does. In an hour and a half, I didn’t make it much more than a 1/4-mile down the trail; who captures that better than Burroughs? I don’t know.

That’s 2018, done. Is 2019 the year I get bored botanizing my own neighborhood? If this week is any indication, it’s not. I still have plenty to do right here.