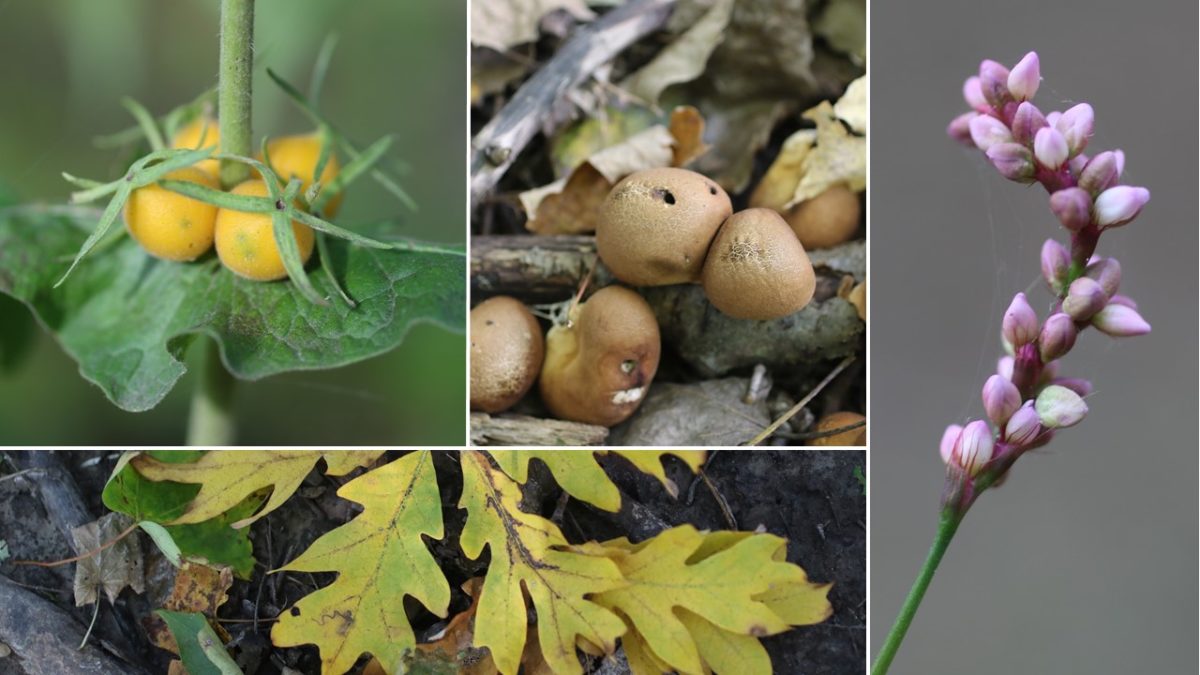 The woods appear to be tumbling into fall unwillingly over the past month. The first week of October, I spoke to a radio journalist who asked me why fall color was coming so early. I said I didn’t know, referred him to Christy Rollinson and Ed Hedborn because they could speak to the matter with data. But what struck me was not how early the woodlands were turning toward fall, but how reluctantly. The maples were mostly browning, scraps of yellow flesh spreading from the spots and crisped margins. Variegated and tattered false Solomon’s seal reclined against fallen logs. Squarrose sedge infructescences were dark, papery. They went to pieces at a touch. I shook a spike’s worth of perigynia in my fist, and they rattled like the exoskeletons of dead beetles. There was a hole in a fallen tree the diameter of a #2 pencil, flanked by lichens and mosses and a centipede. How many lives have revolved around that opening? How many mites and bacteria have been born, reproduced and died within inches of this hole? Manyfold more individuals than I have ever known by name.

By the end of the first week of October, an east-facing slope in the East Woods that had been green with false mermaid and Dutchman’s breeches in the spring was bare, about 80% dirt and last year’s old leaves, some burned out maple saplings, leaves of swamp buttercup and carrion flower. The trail leading south out of the Spruce Plot, which passed through waves of pale jewelweed until mid September, was flanked by skeletons, most fallen, leaving pallid stalks on the ground interspersed with wild ginger and moonseed leaves that were hidden beneath the jewelweed hummocks. Enchanter’s nightshade leaves were all fallen, leaving bristly flowering stalks. Evergreen, almost blue-green hepatica bouquets were nestled beside fallen logs and the bases of trees. They’ve already laid by what they need to get through winter and are ready for the snow. Rotted black walnut husks littered the ravines below hills where the adults were shedding their leaves. A few giant puffballs were still swelling on the slopes. Bluebirds warbled around. Whitegrass was the color of lime sherbet. A colony of false rue anemone two feet across was sending up new leaves in the shelter of a sugar maple.

We’re three weeks into October now, and the colors are finally starting to turn in earnest. White pine needles are yellowing. The crown leaves of bur oak and black oak are falling, exposing the odd squirrel nest. Juncos have come back into town and are rattling from the shrubs, while the golden-crowned kinglets lisp their way around the forest midstory. Robb Telfer reports that woodcocks visited Ware Field the night of October 17. Crickets purr all day long, no longer content to sing by night and early morning. Moonseed leaves are curled into saucers. Stinkhorns are glossy and swarming with gnats and flies. A dryad’s saddle I have watched erupt from the same side of the same tree the past two years has withered and broken off and is curled in fetal position at the base of the trunk. It will fruit again next year. Pores have started opening in the crowns of the stump puffballs, which are yellowing inside or already gooey in the middle and gone to spore around the edges. Horse-gentian berries are bright orange and filled with blackish achenes. Long-bristled smartweed along the trails is the brightest flower in most of the woods, an émigré from east Asia, as delicate as baby’s breath. White snakeroot fruits are as prickly as hoarfrost. Black walnut husks are disintegrating, exposing the rugged nutshells. A few shagbark hickory nuts remain to be cached or eaten. The last fruits are hanging onto the stem: carrion flower berries, cottony thimbleweed fruits, zigzag goldenrod and elm-leaf goldenrod, woodland tick-trefoil, white baneberries rotting on the stalk. Bottlebrush grass seeds are almost all fallen from the stalk, and the stems are reclining. Largeflower bellwort foliage is pale yellow. Alder buckthorn berries are ripening. Virginia waterleaf looks as fresh as it did at the end of June.

Fall is far from over, and the lawns have had a renewed life in the last weeks before the frost. The grass is bright green. Chicory and red clover are blooming. Rosettes of mullein leaves as big as serving platters are splayed out along the edges of the roads. Painted ladies are hopscotching over the gardens. Feathery fruits of asters and goldenrods waft along beside me as I walk. Mushrooms are drying in mulched beds. Fruits are ripening on hackberries planted in the parks.

Saturday afternoon, my older son and I took a short walk in the East Woods. We found aborted entoloma on a rotting log. Carex radiata was still putting up shoots within a ring of fallen culms. There were white oak acorns germinating in the middle of the newly raked trail and a red oak seedling.

The maple leaves are finally yellowing. It may not be a fall like last year’s, but it will do just fine. There is far more to look at than fall color.

2 thoughts on “A hesitant turn toward fall”