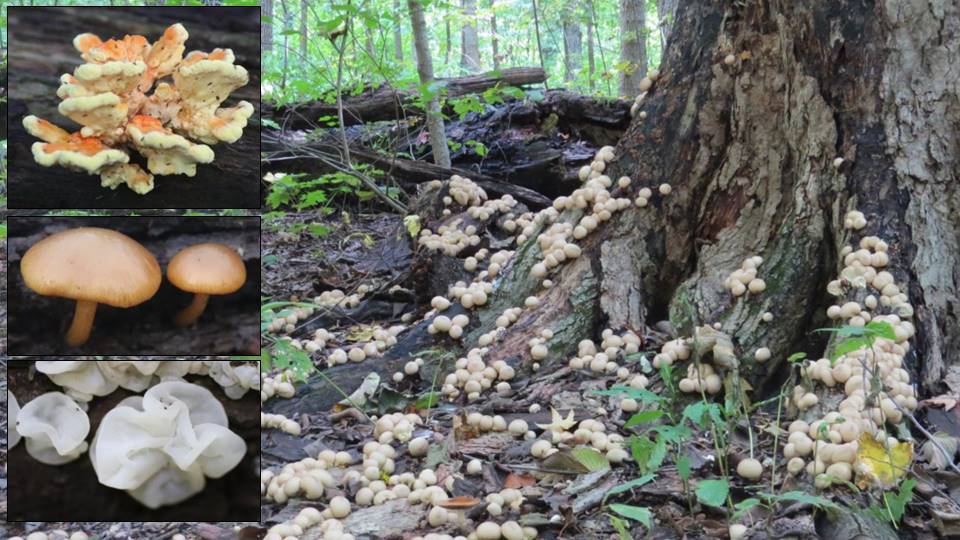 This post is the transcript of a 6 minute, 40 second presentation I delivered on September 7, 2019 at the Downers Grove Art Department’s PechaKucha, an event in support of the Downers Grove art community. The evening featured 7 speakers on a wide range of topics, from a Downers Grove resident who became an internationally-known opera star to competitive diving and biohacking.

For more on The Art Department, a subcommittee of the Downers Grove Marchers, and the great work they are doing to foster the arts and dialogue in Downers Grove, visit their public Facebook Page.

Around the year in Maple Grove Forest Preserve

[1] If you walk west from Emmet’s Pub by the straightest route you can, cut through the parking lot across from Immanuel Lutheran Church to Brook Lane and Turvey Road, you’ll reach the edge of Maple Forest Preserve, an 80-acre sugar maple forest purchased from Marshall Field III by the Village of Downers Grove 99 years ago. I find something new there every week.

[2] 2019 started too warm. By Christmas, spring beauty corms had already started putting out shoots and straplike leaves. This species is a spring ephemeral, built to grow fast, sop up sun and vitamins, flower, set seed and die back before the tree canopy leafs out. This year’s shoots emerged about three and a half months early.

[3] Perhaps more surprising was the false rue anemone, looking on January fifth as I’d expect to find it in mid March. Slower to flower, it should be less nimble than the ephemerals. That same day I found wood violets, wild ginger shoots, earthworms churning the soil. Human-caused climate change is an experiment whose outcomes will continue to surprise us.

[4] A week later, there was snow, thankfully, because by the end of the month the bitter cold had arrived. Snowpack helps plants, insects and spiders, earthworms and small mammals survive the coldest weeks of winter. Its crystalline arms interlink to form an insulating blanket, the base of which evaporates away as the earth warms it, leaving a gap for life at the forest floor.

[5] Mice and meadow voles party under the snow all winter long, gnawing at deer antlers and leg bones, living on cached seeds and tree bark. Owls and coyotes can hear them through the snow, but they are safer underneath than above. Still, their trips up top become inscribed in the snow as they gallop the length of a fallen log or snowplow between burrows.

[6] A downed tree in January reveals dark zone lines that fungi lay down at their frontiers. The fungi are devouring the dark lignin that makes plant cell walls rigid, leaving the rotted wood white. We see the fungus bodies, but it is the white rot that shapes the forest, transforming wood into soil while we’re inside reading and listening to the radio.

[7] Honey mushroom rhizomorphs similarly become visible as bark disintegrates from a fallen oak tree. During the growing season, they invade roots of uninfected trees and work their way up beneath the bark, where the fungus infects the wood and causes decay. They aren’t more prevalent in the winter, but they are obvious even when the edible mushrooms aren’t visible.

[8] By mid March we start seeing spring wildflowers. They all have their strategies. False mermaid germinates in late fall, then emerges as a seedling in early March. It absorbs as much sunlight as it can through April, forms green carpets in the forest understory, sets seed, then dies back as the leaves come out on the trees, leaving trails of yellow foliage and warty nutlets.

[9] Wild leek takes a different tack. It’s a spring ephemeral, spreading broad, thin leaves in March through May that wither as the trees leaf out. You’ll think perhaps that you’ve missed the flowers, but watch for the scapes in early July: after 7 weeks of nothing, they’ll emerge, come into full flower by the end of July, and form dark seeds near the end of August.

[10] Other wildflowers take a longer view. Wild ginger doesn’t emerge until 3 or 4 weeks after the false mermaid. The leaves unfurl as they loose themselves from the soil, then produce a raw-meat colored flower at the soil’s surface. The berries ripen by mid June, seeds crested with a nutritious elaiosome that entices ants to drag them into new territory.

[11] As spring wildflowers peak, songbirds migrate, taking advantage of the insects awakening in the warming canopy and tree bark and the opening buds. Most visible among them are the warblers, which in spring are in their glory, singing and in full color. They are vulnerable, too. This black-and-white warbler struck our window at the Arboretum, but recovered to fly away.

[12] June arrives with an onslaught of sedges. There are roughly 140 species in the Chicago region, and they are in every habitat. Carex davisii was my favorite sedge find of the summer, one of only two populations known in the county. Knowing the sedges, wrote Annie Dillard, makes the “least journey into the world… a field trip, a series of happy recognitions.”

[13] The first of July this year I came across a spongy fallen maple bristling with what appeared to be bright red, tiny toadstools with caps less than a millimeter in diameter and threadlike stalks. I posted the photos online and heard within hours from a Tasmanian naturalist that they were in fact slime molds, protoplasm lurking in open sight.

[14] I’d been missing a whole branch of the tree of life on my walks. Two days later I returned to find at least five species: pin-sized “toadstools,” mungbean-sized “puffballs,” grains of rice suspended by threads, pincushions on the sides of logs, an undifferentiated yellow plasmodium. Next year, I’m hoping for slime molds everywhere.

[15] In August, jewelweed spreads its leaves like a bridge between spring and fall, forming hummocks in the floodplain of St Joseph Creek, bearing open-pollinated flowers, closed flowers that can only self-pollinate, explosive fruits, and gall midges wrapped up in blisters along the leaf midvein or wrapped tight in galls that dangle like chickpeas from the shoot tips.

[16] By end of summer, leaf-miners have etched trails across elm-leaved goldenrod, white snakeroot, and white bear sedge, which looks like a monochromatic map of the London Underground. Joe-pye weed leaves are rolled and chewed and mined. Cavities in the elm leaves rattle as though they were enclosed in cigarette paper. Jewelweed leaves are a tangle of slug tracks.

[17] What will come next? It’s fungus season, and as September burns on toward the first frost, puffballs spread out across the forest floor and brown and dry out, spreading spores at a slap or stomp, if they don’t get collected fresh and cooked up. Chicken of the woods and orange mycena emerge from decomposing trees beside white jelly fungi. The year gives way to rot.

[18] In the coming months, the seeds of late summer and fall will ripen and disperse. American pokeweed berries will darken like plums over the coming weeks. Elderberries already have. Acorns are ripening on the bur and white and Hill’s oaks, and they are falling from the red oaks. Joe-pye weed achenes will fly away as October comes on.

[19] Before we know it, chlorophyll will break down in the sugar maple leaves, exposing the xanthophylls, carotenes, anthocyanins that form the yellows, oranges and reds that we flock to the woods to see. If the tree has time, at the base of each petiole will form an abscission layer that cleaves the leaf from the tree and seals the scar in one stroke. Fall will have ended.

[20] Then winter will begin again, and as the squirrels gather acorns they cached in September, there will be new things to see, each and every day. I could spend my whole life exploring this 80-acre forest down the street and still have more to learn. One good forest is enough for a lifetime.

For additional reading on a few of the slides above:

[1-3] The account of this winter’s precocious spring wildflowers is written up in my January 6 blog post, with photos and identifications.

[6] The Wikipedia article on spalting describes different causes of fungal wood discoloration, and explains in brief how zone lines are formed by white rot fungi.

[12] My post Various forms of happiness describes this past year’s sedge season, with photos and identification of severl of Maple Grove’s species.

[19] An outstanding article by Ted Levin, “The Causes of Fall Color,” from Northern Woodlands, 2002.

2 thoughts on “Around the year in Maple Grove Forest Preserve”