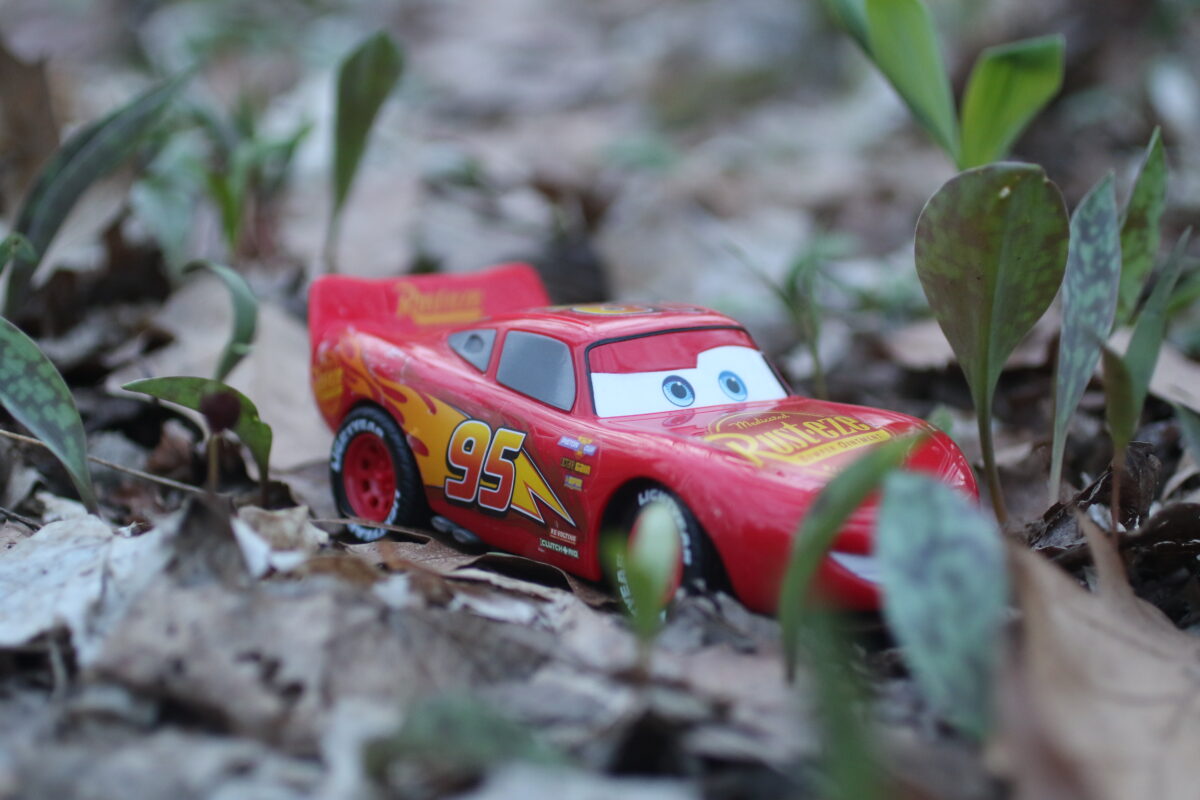 There are more sugar maple seedlings in Maple Grove right now than I recall seeing in any previous years. The forest floor is thick with strappy cotyledons reaching as high as the laces of my shoes. You could collect them by the handful, a dozen at a time if you wanted to. I wouldn’t. Still, it probably wouldn’t do Maple Grove any harm to lose a crop of sugar maples: as the canopy closes in, I am told, the understory has grown sparser and less rich. I don’t have the perspective to see it myself in these woods. I don’t have reason to doubt it.

Baby great-horned owls have been perched in a sugar maple at the northwest corner of the preserve for the past week or two. They stand in the opening of a scar whose apron is splashed white with droppings. When I visited Thursday night, they were there, both standing outside the opening, still. When Rachel and Brooklyn and I visited Saturday morning, they were not. Two other owl babies were on an outstretched branch near the west edge of the preserve downhill from the Maple Avenue parking lot. One faced us, perfectly still. The other had its back to us and shifted around continuously, stretching its wings and hopping. To me, they look almost ready to fly. I wonder if the owls at the other end of the woods have already fledged.

Pale jewelweed cotyledons are as big as nickels, maybe quarters, surfaces finely pebbled, and the foliage leaves are about as large as mouse ears, mostly hidden beneath the cotyledons. I don’t believe there are as many this year as I usually see; in past years, they seemed to be in low areas along every trail, but this year I believe they are more localized. I could be mistaken, and I don’t have notes on this. The low areas of the forest are light green with carpets of false mermaid to two inches tall, some leaves already yellowing, the floral buds still closed tight. Even with Saturday’s temperatures, they didn’t open. I suspect it will take another week or so. The upper flats are blue-green with trout lily. They are caught between floral bud and open flowers. Saturday night there was a toy car abandoned alongside the trail southwest of the Avery Coonley School, trout lily leaves curling over it like overgrown house plants.

Hepatica is still in bloom. I stopped my bike for a show-stoppingly beautiful lavender flower in the Arboretum’s East Woods a week ago or so. In Maple Grove, the leaves are unfurling, rugose, twisted leaflets reminiscent of talons. Virginia bluebell flowers are barely open, lips puckered and pressed closed. Perhaps they will be open by the time you read this. Bloodroot and false rue anemone are still in flower. Solomon’s seal leaf tips are beginning to spread, and largeflower bellwort flowers are showing yellow between the margins of the inrolled leaves. Both are two weeks behind where they were in 2020. Prairie trillium floral buds are still clamped shut; this week two years ago, they were opening. The narrow-leaved green wild leek (Trillium tricoccum in the narrow sense [=T. tricoccum var. tricoccum]) and broad-leaved wild leek (T. burdickii [=T. tricoccum var. burdickii]) are both fully leafed out. Maple Grove has much more of the former, but there are a few places where you can find the two species growing side-by-side. (The opposite is true in Lyman Woods, where T. burdickii dominates.) Mayapple leaves are unfurling, but a few shoots are still wrapped up tight. The invasive lily-of-the-valley is growing rapidly along the trail southwest of The Avery Coonley school, mostly as slender as spear points but a few with arching leaf tips. Squill is still flowering.

This morning in Lyman woods, there are earthworm middens on the trails. Honeysuckle leaves (mostly Lonicera maackii) are 3/4-size. Buckthorn leaves are just bigger than squirrels’ ears. White-throated sparrows are singing alongside the chorus frogs. The staminate flowers have descended on boxelder. Pennsylvania sedge is blooming. As I walked home from the preserve, American toads were singing, the first I’ve heard this year.