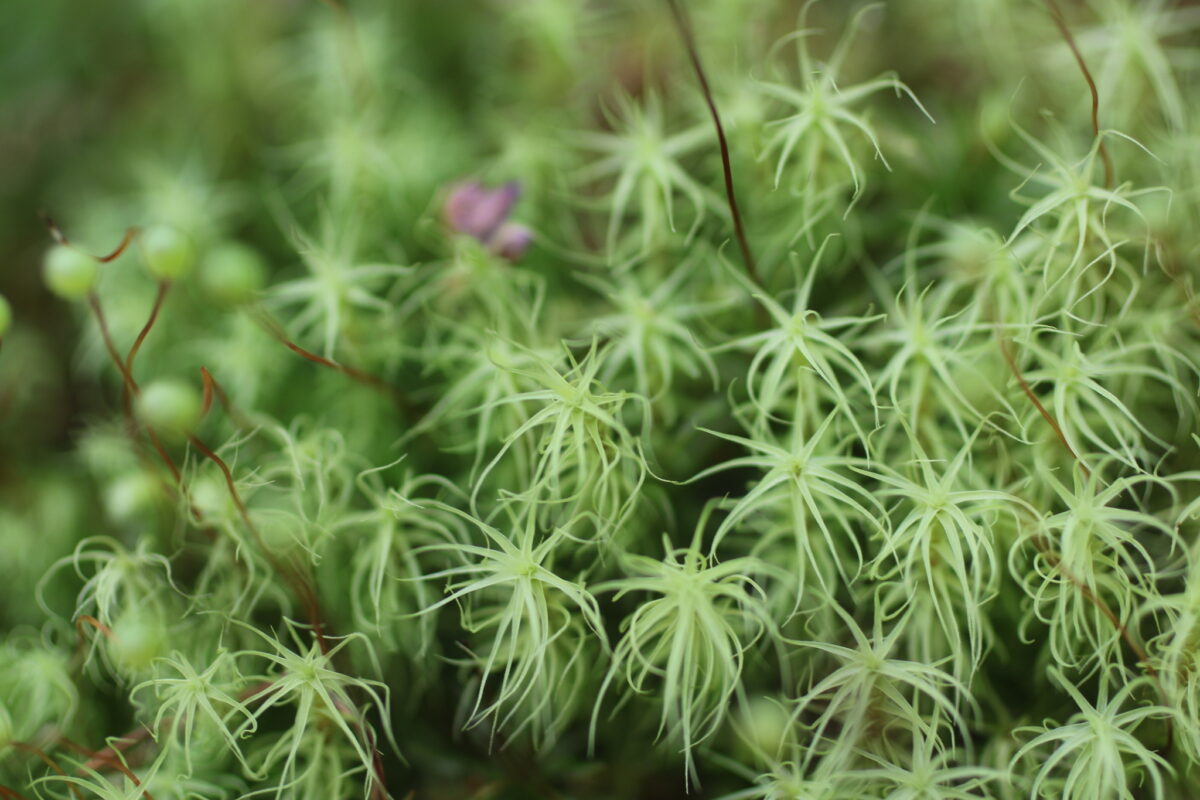 The first Saturday of April, my family and I drove home from spring break in the Smoky Mountains. The Smoky Mountains are part of the southern Appalachians, the bases of a mountain chain that arose between 310 to 245 million years ago during the formation of Pangea. The Appalachians were once as tall as the Alps or the Rocky Mountains, but they have been ground down over time to a more softened landscape of hills and creeks, crawling with red and scarlet oaks, pileated woodpeckers and black bears. They are the heart of the distribution of American chestnut, these great trees that dominated rich forests of eastern North America until they were decimated by chestnut blight, a disease first observed in New York just 10 years before the last passenger pigeon died in captivity.1 The southern Appalachians are a biodiversity hotspot, harboring such endemics as Xanthorhiza, shrub yellowroot, a woody buttercup relative with feathery compound leaves that spills out whips of tiny purple flowers and stains cloth yellow if you boil down the roots and know what to do with them. They are notoriously diverse in trilliums and trees, salamanders, mosses and fungi.

Everything on the trails we hiked was rich, even where it was dry. Plantain-leaved sedge was blooming in the floodplains, purple sheaths closed tight around the bases of staminate inflorescence stalks that sprouted bouquets of stamens. Upslope, mayapples were still wrapped tight, wearing their leaves like windbreakers. Brome sedge tussocks congregated in sloughs and had only just begun flowering. Fraser’s sedge inflorescences bobbed like white moths along the trail. Hepatica bloomed everywhere in the woods: in thin soil at the bases of trees of all kinds, in cove forests far from the trees, in a garden of mosses and dry leaf litter on a boulder with Carolina spring beauty, in mosses on the side of a tree at knee-level with foam flower leaves. Pennsylvania sedge and woodrushes bloomed on dry slopes and trail sides.

Little Sweet Betsy bloomed deep red and trout lilies yellow along almost every trail. Violets kept surprising me: the tiny white flowers of V. macloskeyi, the humdrum purples of V. sororia, the purpling, triangular leaves of V. hastata, tiny yellow flower and nickle-sized leaves of V. rotundifolia, the long purple spurs of V. rostrata. Ramps were leafing out. Red oaks grew stunted along the ridgeline leading up from Pisgah Inn, trees about a foot and a half in diameter but barely twenty feet tall, breaking off and scarring, the leaf litter pooling in the cracks making a home for rhododendrons and yellow birches. The latter had grown into saplings in the red oak crowns, a subforest in the canopy.

Scarlet oak was everywhere. In the lawn of the Folk Art Center, I collected acorns by the handful, caps pebbled with glossy, hump-backed scales, the tips of the nuts sparsely etched with pits. On the slope behind the house where we stayed in Dillsboro, Pennsylvania sedge bloomed in the shade of scarlet oaks and southern red oaks. The peak of the highest trail we hiked in Smoky Mountain National Park was a near-solid stand of two species: mountain chestnut oak and scarlet oak. I find it remarkable that scarlet oak, which spills off the slopes of the Appalachians to fill so much of the eastern U.S., is the sister species to Hill’s oak of the western Great Lakes region, which is all but restricted to the glaciated north, and only known to science since Ellsworth Jerome Hill described the species from southern Cook County, Illinois in 1899. At some point, the Hill’s oak we know from the Chicago region became an entity with an evolutionary trajectory of its own, distinct from scarlet oak. These two species give the forests of the Smoky Mountains a continuity with the forests of DuPage County.

We hiked through Joyce Kilmer Memorial Forest, an old growth forest dominated by tulip trees more than six feet in diameter and perhaps 150 feet tall. The trees are hulks. They make the 340-year-old white oaks planted by Jean-Baptiste Colbert under Louis XIV look like adolescents. The next day, hiking through another tulip-tree dominated cove forest, my older son pointed out that we might have been in Maple Grove. I could see his point. While Maple Grove is no cove forest, and while it lacks even a single tulip poplar, the openness of the forest and richness of the understory felt familiar, like walking through a maple-red oak forest of the upper Midwest.

What makes a forest unique? The ecologist E. Lucy Braun addressed these questions in a 1955 article, “The Phytogeography of Unglaciated Eastern United States and Its Interpretation,”2 which I read one night during our trip. Braun wrote that the forests of eastern North America are “… a result of present and past conditions of the environment. Edaphic factors” — attributes of the soil— “play an important role in determining local distribution. Topographic factors determine, in large part, the microclimates of an area, in contrast to the regional climate.”

“But topography changes,” Braun writes, “and consequently, through geologic time, the physiography of large areas gradually changes in accord with the progress of the erosion cycle. One type of habitat will decrease in extent, while another increases.” This view of the world as a place where species are pushed around by changes in climate and landscape, assemble into communities and interact is what I was expecting in Braun’s work. What I did not expect was the next sentence: “Species ranges must shift with such environmental changes, or ecotypes develop which are suited to certain microclimates of the changed area.” The italics here are mine. I had expected that an American ecologist writing in 1955 would treat species a bit like chess pieces, moving around on the landscape in complex and interesting ways, but pretty much unchangeable actors with fixed roles. The landscape in this view is the stage on which whole communities of organisms interact. Instead, Braun was describing species as evolving populations. The literature I generally read is dominated by folks like Edgar Anderson and G. Ledyard Stebbins, who have the evolving species as their focus. Braun’s writing occupies, at least in part, a joint between the ecological and evolutionary perspectives. Species are evolving in response to the landscape, not just assembling into communities. Braun seems to be with Heraclitus on this one: you can’t step into the same plant community twice. Not even the species will be the same from one generation to the next.

Had I read Braun’s work when I probably should have, 25 years ago, as a ranger interested only in natural history instead of as a middle aged naturalist who spends his time thinking about species, I think I would have missed these sentences bridging between evolution and ecology. “Climate determines potential range, within the limits set by local factors. But climates have changed in the past, and therefore the ranges of species or whole groups of species—communities—change; enforced migrations take place.” The world creates and is created by species. “Migration often results in disjunction of range; in isolation of relatively small units of the population of a species; in gradual change in morphologic characters of a species from one part to another of its changing range; in contacts between related species formerly entirely distinct in range but capable of hybridizing when they come in contact.” Forests grow and change, a product of the species they contain. And as the forest changes, it changes the shape of the Tree of Life.

Braun was writing about the forests of unglaciated Eastern North America, but her account of what makes a forest unique applies to Maple Grove as well as to the forests we walked in the Smoky Mountains. Evolutionary history and species interactions playing out in a particular matrix of soils, landscape, and climate, all changing, make each forest what it is. Some happen to be much older than others, but the processes are essentially the same.

Maple Grove is about to come into bloom. The Sunday after we returned, false mermaid was starting to hold its own against the fallen leaves. Annual bedstraw stems were extending above the cotyledons. Wild leek leaves were spreading. Canada elderberry buds were breaking open in the floodplain of St Joseph Creek. Prairie trillium shoots were breaching the litter, leaves still ascending and rolled around one another. Great waterleaf cotyledons were each about the size of a dime. Sugar maple cotyledons were unfurling, and their roots were as long as the wings on the decomposing fruits. Trout lily leaves had cut their way through the litter and were still wrapped tight, as narrow as skewers. Virginia bluebell leaves were the size of baby spinach leaves. Wild garlic leaves were ankle-high. The first mayapple shoots had split open the papery sheaths that wrap them tightly, and the first folded leaves were growing at the tips of the wild ginger rhizomes. There were wood ducks on the ephemeral pond in the middle of the preserve, a brown creeper shuttling between the tree trunks, a golden-crowned kinglet on the forest floor, water striders in the eddies along the shore of St Joseph Creek. The first flowers were opening on false rue anemone.

By most standards, Maple Grove pales in comparison to the Smoky Mountains. It is 80 acres in extent, a ten-minute walk from the ballpark at the north end to the ballpark at the south. But as I walk it in the coming weeks, I will not be able to help seeing Maple Grove as an offshoot of the forests of the southern Appalachians, connected to them by migration and evolutionary history. It is not only that, of course, but it is in part.

1 In the Southern Highland Craft Guild’s Folk Art Center, there is a gate carved out of beetle-perforated American chestnut, often called wormy chestnut.