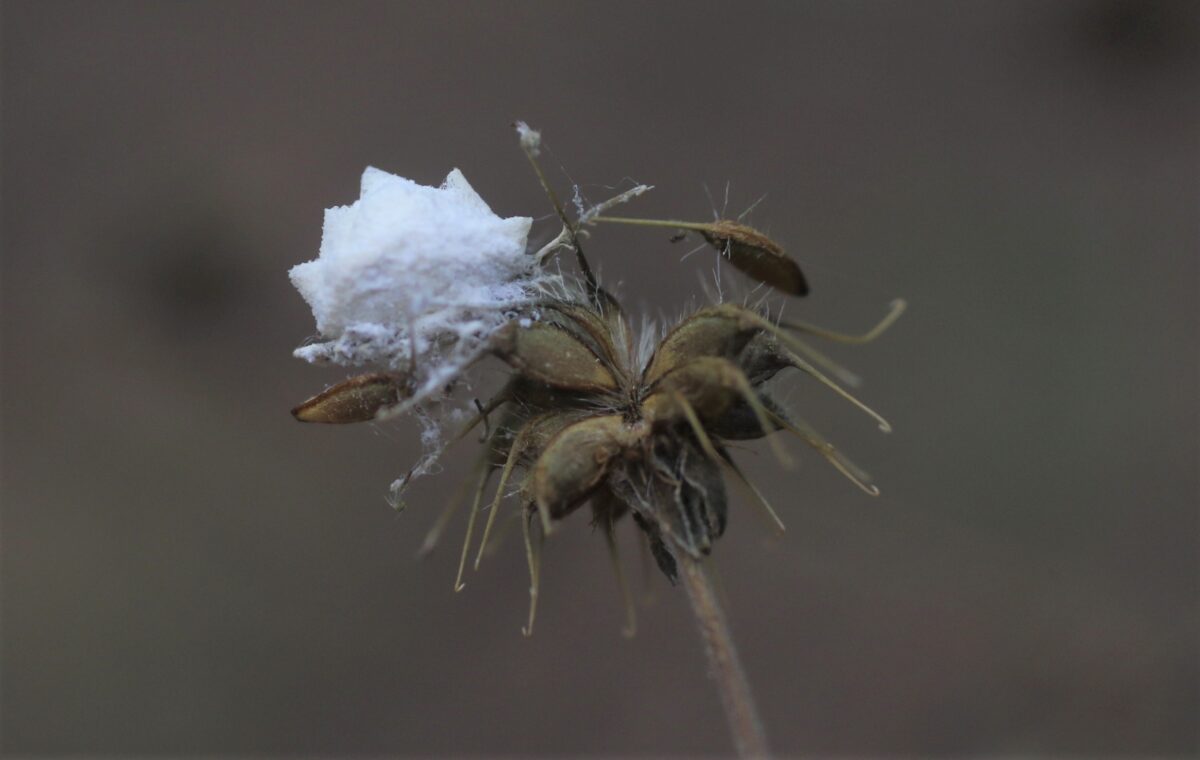 The jumping worms were wreaking havoc in Maple Grove when Brooklyn and I arrived Saturday morning. I turned back a fistful of litter to see what was going on under the leaves, and at first I thought I was looking at an assembly of common earthworms I’d known all my life. There were about a half a dozen of them in an area the size of saucer. They were still for a moment on a bed of moist soil crumbles, but only for a moment until one started twitching. Then they were all in a panic at once, writhing as though they were being electrocuted. It was like watching eels twisting through the water or cats falling from a second-story landing, bending and twitching and arching through their fall to land on their feet and race away. Watch that for a moment, and then think of the entire forest floor at that moment doing the same thing under the dried and fragmented red oak and sugar maple leaves, the upper few inches of the soil churned by the hordes of jumping worms. I had been hearing about them for years, but I’d never been certain I was seeing them before. Perhaps they’ve grown more common, or perhaps I was just in the right place at the right time on Saturday. They are changing the physical properties of forest soils and appear to have opposing effects on the growth of sugar maple and white oak seedlings. How and how much they will change our forests we don’t yet know.

Near the north edge of the forest I found a tiny cocoon, a white inverted crown about four or five millimeters in width spanning two clusters of black snakeroot fruits (Sanicula canadensis). I almost dismissed it as a speck of bird poop, but on closer inspection it was striking, a densely woven structure with a Stegosaurus-like spiked ridge, knitting together the plant’s achene beaks with a cobwebby bridge. Near the end of our walk, on the trail leading out into the neighborhoods to the east, I found another adhered to the upper leaf surface of a Carex rosea. It struck me that these must be widespread in the forest: the two plants that I found them on are as distantly related as any two flowering plants in the forest, so there seemed to be little if any taxonomic specificity to the cocoons; I found these two about a fifth of a mile from each other; and the cocoons are quite small and could easily be overlooked. They must be all over.

Later that day I poked around online and found that the cocoons belong to the planthopper parasite moth, which lives a varied life. In youth, it is parasitic on planthoppers, which it clings to and feeds on the hemolymph of. It pupates in its extravagance of a cocoon, which has been compared to the Sydney Opera House. It then emerges as a somber gray moth. I was advised through iNaturalist by Charley Eiseman, who has published books on insect tracks and signs and leaf miners, that “larvae of this species drop off their hosts and dangle from silk threads for a while before finding a pupation site”, and that as a consequence they are not faithful to any particular plant as a substrate. I will be watching for the adults and looking for larvae hanging onto planthoppers careering around through the understory later this fall and next year.

The seeds of broad-leaved wild leek (Allium tricoccum var. tricoccum, if you prefer it as a variety instead of a species) are mostly not yet exposed. Scratch away the papery epidermis surrounding the seed, and the black seed coat shines like polished ebony. A few shriveled seeds have appeared, but nothing like the narrow-leaved leeks (A. tricoccum var. burdickii), which have been dropping their seeds for weeks. Basswood have been dropping theirs as well: trail edges and the no-man’s land along sidewalk margins are filling with basswood fruits the size of baby peas. In the past week, bur oak acorns have been dropping and are being squirreled away by almost as fast as they fall or crushed under car tires. I came across a bur oak seedling Saturday morning under relatively dense forest shade. It has put up two shoots that have seven leaves between them, the acorn shell still visible at the soil’s surface. I don’t know for sure, but I would guess that this seedling got started during our last mast year, which was in 2018. I say this with some hesitation, because that seems like a long time to persist under dense shade for an oak seedling. But 2019 was a poor acorn years for bur oak, and 2020 was abysmal. I suspect almost every acorn that fell in those years was scarfed down. 2021 has turned out to be another bur oak mast year. The forest understory may be crawling with seedlings next summer.

Sunday I returned with Brooklyn to look for planthopper parasite moth cocoons. We found one right away on a bluegrass leaf near the parking lot. We crossed the bridge, waded into St. Joseph Creek to cool off and watch the water striders, then spent several minutes at the sugar maple that is down across the trail just west of St Joseph Creek, watching an enormous pigeon tremax horntail wasp exploring the sides and underside of the tree. It was presumably looking for a place to oviposit: this forbidding insect does not sting, but it deposits its eggs in dead or dying trees. As it does so, it introduces a little white rot fungus that will help break the wood down and is, from what I am reading this morning [link above], essential to development of its larvae. The wasp is helping to convert the fallen maple to soil.

Over the course of 40 minutes we found seven more cocoons on a wide range of substrates: one riding the sinuous beak of a white avens achene; one on the underside of a wild ginger leaf; one on the major vein of a skeletonized sugar maple leaf, and another on the remnant of an leaf decomposed beyond identifiability in the litter, though probably a maple as well; two on bare dirt, the crumbles I realize now of jumping worms; and one perched on the side of a knee-high, coffee-stirrer thin sugar maple resprout. This was a casual search. I can only imagine how widespread the cocoons would turn out to be if we undertook a careful and systematic search.

What can you make of this diversity? Charley Eiseman wrote that the larvae pupate wherever their hosts happen to be. Perhaps, then, we could work our way backwards from the distribution of cocoons on plants to the locations of their planthopper hosts at the moment each larva dropped off, giving up its parasitic childhood. From there, we might infer the distribution of food plants of the hosts. We could learn more about the lives of the planthoppers hosts from the scattershot of planthopper parasite moth cocoons fused to leaves in the forest understory.

Mosquitos had turned aggressive, then I heard thunder to the southwest. Brooklyn and I walked out of Maple Grove past jelly fungus that had turned creamy on a fallen white ash. The lightning sirens went off over the Gilbert Park ballfield a few minutes before we reached the car.