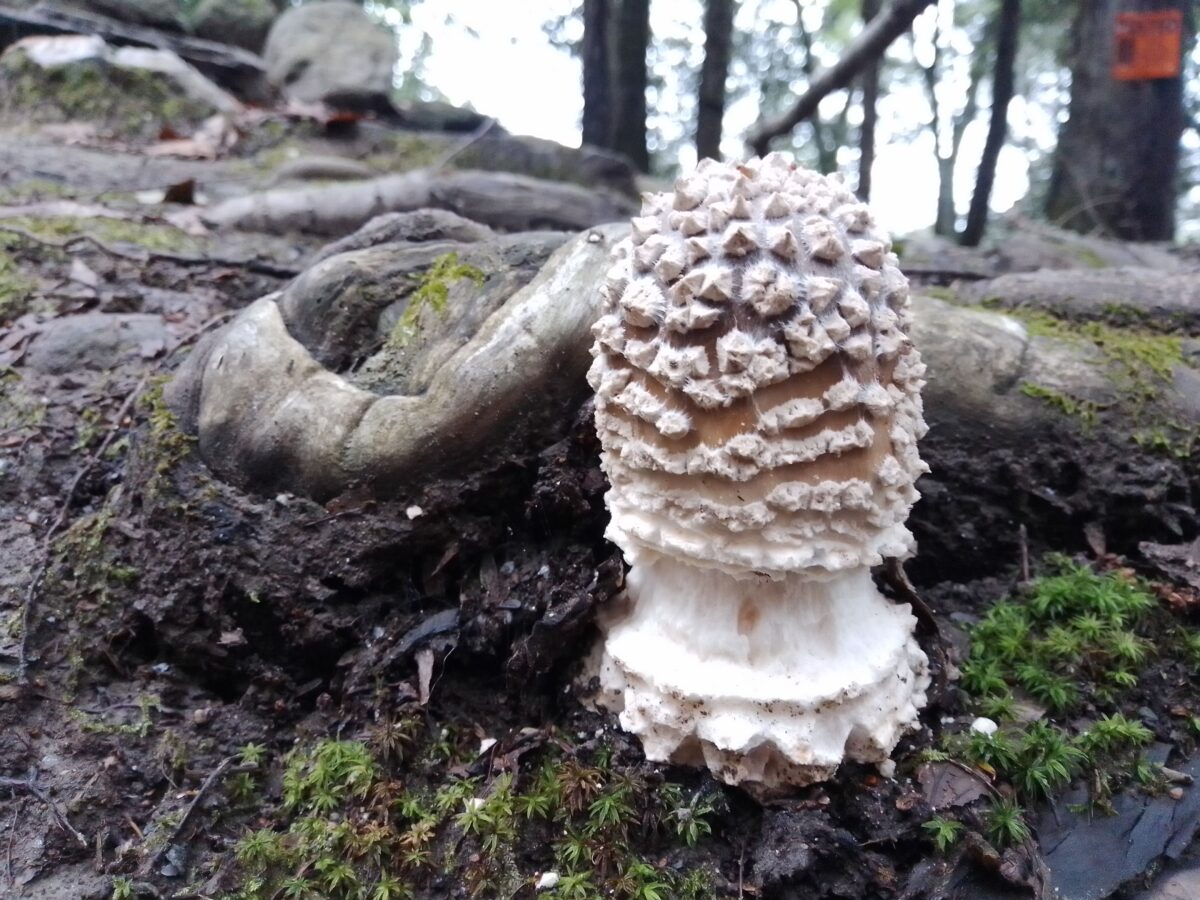 The trail to Stone Church begins innocuously at the sidewalk between two white houses in Dover Plains, New York. My family and I parked the car on a side road, crossed NY-22, and came across what looked like a gravel driveway into someone’s backyard, save for a sign announcing “DOVER STONE CHURCH” and providing this dispassionate and eerily punctuated description: “A CAVERN, WITH A WATERFALL, REFUGE OF SASSACUS. PEQUOT CHIEF, FLEEING FROM ROUT OF HIS TRIBE AT NEW LOUDON, CONN. AFTERWARD KILLED BY MOHAWKS.” I hoped that no one would ever have occasion to write so tersely about my murder and the rout of my people. We followed the path down a flight of steps onto an allée of planted trees, maples if my memory is correct, flanking a gravel path wide enough to accommodate a small pickup truck. We climbed a short flight of steps at the end, and we were on the trail following Stone Church Brook into the forest.

The weeds of town followed us: heal-all, perhaps goldenrod, almost certainly aborted buttercup. I was not paying close attention, and I wrote down none of what I was seeing. My recollection of the weeds is vague as a consequence. I wasn’t surprised to see any of them. I often assume I will remember things that are not surprising at the time, but because they are not surprising, I find them especially difficult to recall with precision later on. So I do not know which weeds I saw on the walk in along Stone Church Brook, before the forest closed in and became a Taconic Mountain flora, and what plants are hold-overs from memories of walks in other woods. Was there deadly nightshade, or do I remember that from the edge of the woods at Picnic Point in Madison? Were there daisies? Was there bluegrass? Perhaps, or perhaps I am remembering those from hikes along Salt Creek or the path into Lyman Woods. Socrates worried that writing would be the death of memory. I consider it the most reliable memory I have.

The oaks were all northern red oaks, one of the iconic canopy trees of eastern North American mesic forests. It ranges from New Brunswick through the Appalachians to near the southern edge of Alabama, west past the Mississippi onto the Great Plains and east to the Atlantic ocean. It is the most widespread tree of the red oak group, an American lineage of ca. 125 species whose acorns mostly develop in the year after they are pollinated and whose leaves are tipped with bristles. Red oak is an early-successional species, helping to set the stage for ironwood and slippery elm and basswood and sugar maple. When you find mature red oaks, you rarely find red oak saplings below them. Some years, after a mast, you may find pockets of red oak seedlings throughout the forest, even carpets of them. They live for a year or sometimes more off the marble-sized, carbohydrate-rich cotyledons the mother tree left for them inside the nut. They bide their time. But unless there is a significant disturbance, a fire or a large blow-down, they won’t be able to compete in the shaded understory. They will devour their resources like a kid eating up the last of his sac lunch, then yield to the sugar maples crowding into the sapling layer.

The forest understory filled in with northwoods biota as we proceeded up the trail: Canada mayflower and striped wintergreen, intermediate fern and Christmas tree fern, coral fungus, masses of Polytrichum moss with full sporophytes reminiscent of tiny stalked zucchinis. We reached a sign pointing to three possible trails. A panel hand-written and nailed on at the top read “CAVE” and pointed to the right. We followed it, and in a few minutes cool air tumbled down the trail toward us. Stone church opened in front of us, a cathedral-like fissure in the rocks with the brook tumbling through, carrying rock and silt from the forest down into the town of Dover Plains. This is where Sassacus is said to have hidden as the Pequots were defeated by the English, before he fled to the Iroquois Mohawks, only to be murdered by them. Inside the cave, the water rolled around us in waves. Above, the cave was split like a slot canyon. We were hiking there with our cousin, who told us about a local girl who had hiked to the top of the ridge overlooking the cave and fallen in, dropped down with the waterfall and crashed on the rocks. If I am remembering the story right, she had to be carried out but was fine. We stayed on the trail ourselves, took a few photos and moved on.

We returned to the sign and took the overlook trail uphill. Our trail cut across a streak of scarlet oak, like a vein of coal intersecting our route and following us upslope. I found only the globose acorns with broad scales and slender, elongate tips, with clusters of deeply lobed fallen leaves. There were a few blown-down branch tips of white oaks, and again I somehow missed the trunks. How did I miss these big trees, which I spend so much time looking at and thinking about? We were all deep in conversation. That might explain it. I came across a precocious ghost pipe that was already fruiting, the flowerhead turned upward. Why this one? A particularly rich microsite? A few precocious blueberries were ripe. Cousin Dorothy and I each ate a couple; they were small and a little tart, but good.

We headed farther upslope to a point where we could look over the entire town. Rachel pointed out that we were higher than the raptors flying among the trees below us. The woods had given way to a rocky trail with scattered bear oak (Quercus ilicifolia) in the shrub layer. The canopy had transitioned to the thick-barked chestnut oak (Quercus montana). Among the bear oaks, I found some that had a leaf shape more like that of blackjack oak, Quercus marilandica. I did not find any large trees, and we were a bit beyond the range of blackjack oak. Still, I wondered whether there might be some on the landscape, or at least residual alleles. G. Ledyard Stebbins wrote a paper in 1947 describing a mixed population of these two species, taking leaves from an herbarium sample to represent the rangewide variation of each species, like taking a Gallup Poll: sparse, widespread, representing individuals from the full geographic extent of each species, but none close together. He measured leaf lengths, widths, lobedness, a small sample of the attributes coded by oak genes that adapt each tree to its environment. He then measured the same characters in his mixed population, and he found that when the trees grew together, they were more similar than when they grow separately. Two different red oaks at a site could exchange genes, but even after 200 or more generations they were still distinct species. Stebbins reasoned that on average, alleles trickle from one species to the other more slowly than they are snuffed out in the new species. The alleles that cross the species boundary—bear oak alleles crossing into blackjack oak, blackjack oak alleles into bear oak—are mostly weeded out by natural selection, keeping the species distinct even as they continued to swap genes. Perhaps a few survive, but only if they are lucky or if natural selection is on their side. If it is, then a bear oak might have a few residual gene copies from great-great-great-great-great grandfather blackjack oak that do it good in some subtle way, allowing it to grow a little faster in poor soils, fruit more heavily in dry years. In this way, a blackjack oak population long gone or far away might leave an echo in a bear oak population on a hilltop in Dover Plains today.

This was all conjecture and wondering. My knowledge of bear oak is poor. But as I look now through herbarium samples for the species, I see only one out of about 100 that resembles what I was seeing in the field, so perhaps the leaves I thought looked like blackjack oak were anomalies born of gene flow or plasticity. Either way, we took our time walking out, took loads of photos. Amanitas were emerging from the forest floor and stalked puffballs from the rotting logs. Wolf’s milk was putting up a brilliant and gross display of ooze, backed up against a rotting stump. Ghost pipes were everywhere, huddled together like teenagers chatting, heads nodded, pale. We missed our turn, got off on the wrong trail, but eventually made it back to the car hungry. We crossed back over NY-22, had ice cream for lunch, and headed home.