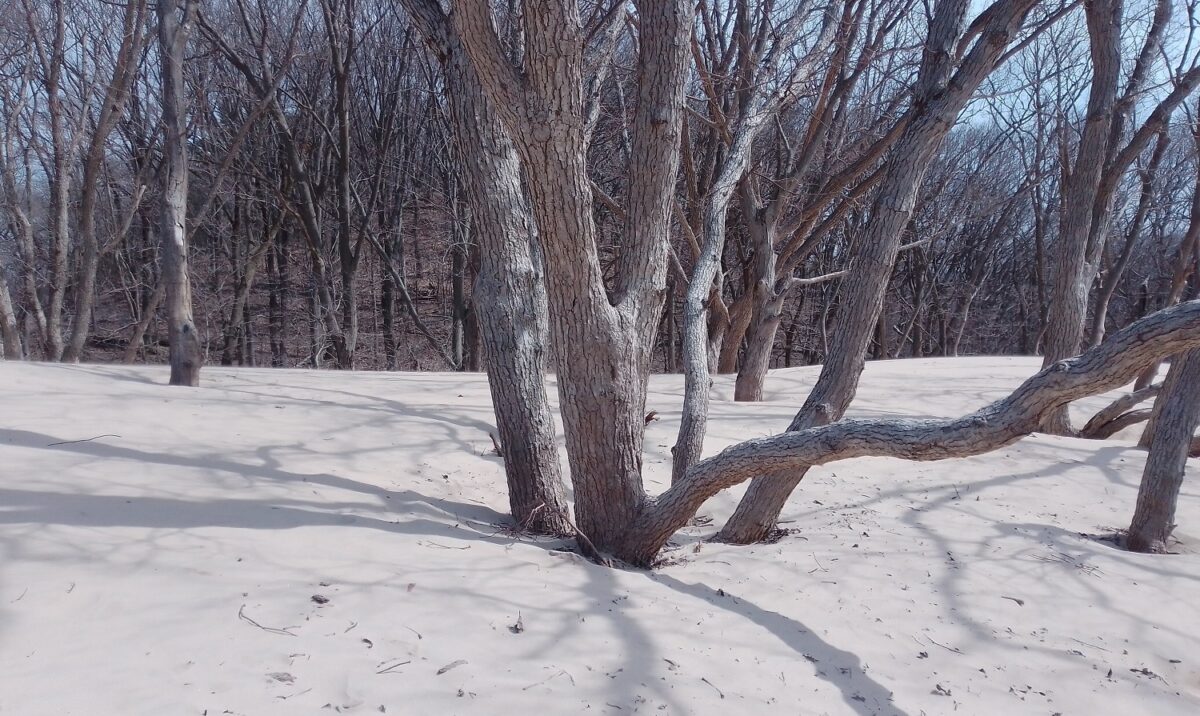 The last Sunday afternoon in March, after a sixty-degree Saturday afternoon, Cornelian cherry dogwood was flowering in the neighborhoods adjacent to Maple Grove. Orchard grass was blue-green and rubbery, shin-high. Reed-canary grass was just a bit taller, always stouter, always bossier. They are both exotics, but only the reed-canary grass is a problem in our area (and it’s a hug problem). The basal leaves on willow-herb had turned brightly green. The cotyledons on yellow touch-me-not were the size of dimes but sparse in the woods. By the time you are reading this, they will be everywhere. Wood violet leaves were unfurling. The forest floor had begun to grow hazy green with false mermaid leaves creeping over the duff. False rue anemone was on the cusp of blooming, terminal flowers on a few plants almost open, and the first spring beauty flowers were open on south-facing slopes. Cardinals were whistling, and robins were flipping the fallen leaves of oaks and maples in the jerky predicable-but-stochastic way they do, grabbing them and leaping backwards, turning their heads to look down, turning up and looking around as though there were nothing to see here, folks, we’re just robins flipping leaves. If we were to map them, shoot a movie of them from above, would each be hopping in a different direction, independent of one another, or all uphill or downhill? Would they resemble Brownian particles? or would their movements trace the interactions between food and topography? This is a map I would love to see.

The next day, my family and I drove to Sawyer, Michigan, and we awoke Tuesday morning to phoebes and tufted titmouse singing in the backyard. Sporophytes were forming arrow-straight on the haircap mosses—Polytrichum or Polytrichastrum mosses, I wasn’t sure which and am still not—in the understory of the Jens Jensen Preserve, where drainage ditches were dredged straight in cardinal directions through the sandy soil, under a canopy of beech, sugar maple, red oak and tulip tree, with sycamores, black cherries, yellow birches, and once-ashes, now husks rotting on the ground. Interspersed with the slender sporophyte hoods were last year’s thickened, ridged capsules, bent over and dry, bobbing at the ends of crooked red stalks. The haircap mosses bunched up in hummocks on the sandy floor or encircled the bases of the tuliptrees. There was a hairy-leaved moss, acrocarpous, perhaps Dicranella heteromalla, Dicranum scoparium, or something else in the family Dicranaceae… perhaps. There was an Atrichum, what I took to be A. altecristatum, like a haircap moss with broader leaves, slightly undulate on the margins, and capsules round in cross-section like flower vases or hot dogs. But I wasn’t sure about any of the mosses: I am a wildflower enthusiast when it comes to mosses, comparing pictures and never quite sure of what I am looking at. Spicebush was blooming everywhere in the woods, diaphanous six-petaled flowers with lemon-yellow anthers, small enough you could fit a half a dozen of them on my thumbnail without much overlap.

Scales of the shattered tulip tree fruits blew together into little piles against the mossy hummocks, ridged on the inner surface, reminiscent of pine cone scales stripped off by a hungry squirrel or the chaffy samaras of ash trees. That afternoon, walking to Warren Dunes State Park with my family, I realized how common the tulip tree is there, this magnificent, tall, straight trunked tree that grows straight up without branching before spreading into a dignified crown. I am a Wisconsin botanist and am still not accustomed to running across this tree in the wild. Peattie writes that in the southern Appalachians, the tree can reach 200 feet tall and 8 to 10 feet in diameter. Yet this wonder of the eastern forests was everywhere on our walks through Berrien County. As we walked the county road toward the park, we passed through a trail where Carex communis was blooming, short flowering culms tucked in among the bases of leaves tufting along the trails, dead at the tips, evergreen for the proximal two-thirds.

We could walk into Warren Dunes State Park from the place we were renting. We crossed a bridge over a little creek on this walk, and on one of these a belted kingfisher called and flew along the path of the river beneath us, like a teenager flying down a curving hill on a bicycle, thrilled, joyful, following the contours of the road as it twisted around the moraines, happy just to use its body. It appeared and then was gone in a few seconds, reminding me of Bede’s sparrow flying through the mead-hall in mid-winter, passing in through one window and then out through another. Then Lake Michigan opened up, and we spent several good hours walking and running and throwing rocks.

The walks to Lake Michigan through Warren Dunes were one of the highlights of our visit. The transition from forest to lake is the kind of thing our dreams are made of. You enter through a rich forest of sugar maple, basswood, red oak, beech, occasional eastern hemlock, with an understory of white bear sedge, Dutchman’s breeches, toothwort, hepatica, the other usual suspects. You climb up, and near the top of the dune, the forest ends, trailing off to sparse woodland of sassafras, red and white oaks. You can see by looking across the dune crests that the forest is advancing and receding over what must be the course of decades, perhaps just centuries, but certainly more quickly than the rich forest through which you’ve walked in: on the top of one of the dunes, we sat beside white oaks buried up to their calves in shifting sand, no forest floor beneath them. The forest gives way then to little bluestem and switchgrass, then to open dunes stabilized by dune grass (Ammophila breviligulata, it looked like to me). There are enormous blowouts and slopes where the sand has slumped away and all the vegetatation is gone. The boys and Brooklyn and I climbed up the steepest one, pure sand with dune grass on both sides. At the ridge, we found the far side was a surprisingly steep slope stabilized by pure sassafras.

Down through the dunes toward Lake Michigan, there are a few perched wetlands that are fascinating in their own right. They looked to me to be about 20 feet above the lake level, but I’m a horrible judge of this kind of thing. The sand is alkaline, and you can tell: around the open water is a bed of dried stonewort, an aquatic alga that stinks and only grows in relatively calcareous water. It was whitened, crisped and skunky. There are dried stems of at least three rush species. There were pines growing at the edge of the one we visited, one white pine and one jack pine. The wetlands are striking in the way they appear in the sand and then give way, a few inches up on the landscape, to wormwood and juniper. Years ago my friend Jonathan Coop pointed out to me in the Valles Caldera outside Los Alamos that it only takes an inch or two to separate wetland from dry grassland when the soil drains well enough. This is certainly true in the dunes.

Back in Downers Grove, Good Friday morning was just freezing at 9 a.m., but the neighborhood was a din on the walk into Lyman Woods: mourning doves, blue jays, red-bellied woodpeckers, song sparrows and robins. The only quiet bird was a downy woodpecker moving up the tree, alternately climbing and hopping. The earthworm middens that were all over the trail on the 25th of March were crushed or scraped away by walkers like myself and not rebuilt. Virginia waterleaf was abundant and swollen to nearly full-size along the trail. Gooseberry and rose were leafing out, honeysuckle leaves were the size of my fingernail.

Temperatures rose to the mid 70s by Easter, and the cottonwood floral buds swelled and the boxelder flowers opened. By the following Wednesday, after three more days in the 70s and 80s, the cottonwoods were dripping with catkins, big swollen things that fell into the street the next day during a morning of rain. They grew gelatinous and lay like stunned caterpillars on the pavement as Brooklyn and I walked the neighborhood. Yellow-rumped warblers and white-throated sparrows and field sparrows started singing in their preferred places all over town, backed by chorus frogs. Meadow-rue came into bloom with a riot of anthers. Spring beauty and toothwort are flowering everywhere now. Boxelder flowers have spilled out of the buds and are dangling furry and graceful throughout the woods and neighborhoods. Mayapples are opening. The first leaves of ironwood have come out but are still tiny and sharply corrugated. Dutchman’s breeches and toothwort and bloodroot have bloomed. The forest floor is becoming dense with false mermaid.

And as I write this, the robins are going full tilt and the sun has been up for an hour, and there’s rain forecast, and the mourning doves have settled on our driveway and are driving Brooklyn out of her mind. I’ll head out now. But before I do, the first stanza of William Carlos William’s (1939) “The Poet and his Poems”:

The poem is this:
a nuance of sound
delicately operating
upon a cataract of sense.

Vague. What a stupid
image. Who operates?
And who is operated
on? How can a nuance

operate on anything?
It is all in
the sound. A song.
Seldom a song. It should

be a song—made of
particulars, wasps,
a gentian—something
immediate, open

scissors, a lady’s
eyes—the particulars
of a song waking
upon a bed of sound.

That might be enough guidance for the coming year or two.

4 thoughts on “Sparrow passing through”