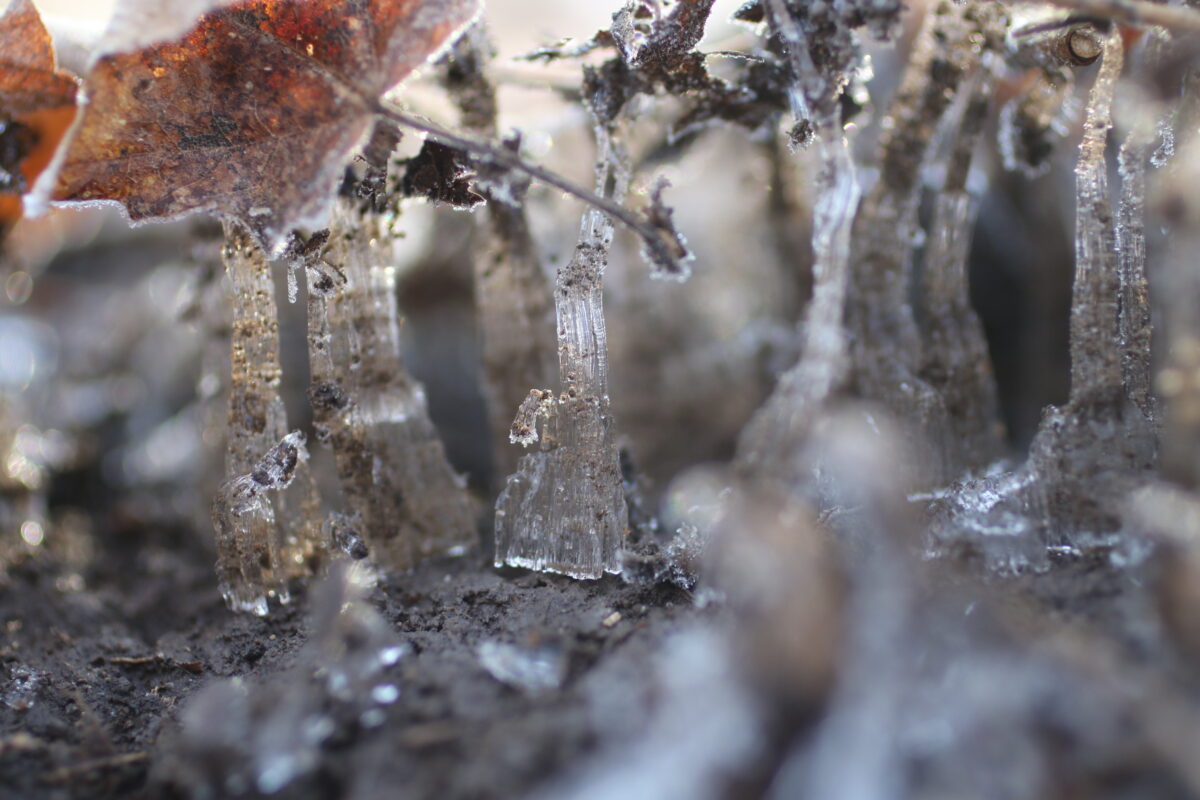 Mid-February was bitter cold with snow about two feet thick. On a lunchtime walk in the single digits, the day after Valentine’s Day, I watched a fox squirrel practically swim through the snow away from a tree, then bury itself. After 30 seconds or so, when he hadn’t popped back up, I wondered if the squirrel had descended into a labyrinth of tunnels at the ground’s surface, something I’d never imagined that squirrels might share with the network of nests and channels that the mice inhabit while humans are freezing up above. I approached and could see movement below, twitching of back fur and tail, snow flying as he moved into and out of my view down the hole, rooting around for acorns at least half-remembered from a few months earlier, perhaps half-intuited: this is the kind of place where I would have cached them. My photos from that day range from just about the moment he dropped beneath the surface—perhaps 10 or 15 seconds after, but no more, because I was aware this was special—to the moment he emerged again and bounded off as well as he could to the nearest tree. It’s 2m56s between the first and last photos. Add a little for lag time, and that makes a bit over 3 minutes under the snow. Is that enough time for a squirrel to recover a walnut or acorn and eat it or stash it deeply enough in its cheek that I couldn’t see it? I hope so. Otherwise, that was a cold excursion for nothing. I followed the squirrel to the tree he climbed up, then I followed his trail backward perhaps 7 to 10 minutes in time, to two more holes and the shallow divot he’d carved between them as he front-crawled from one hole to the next. I looked for acorn shells, dug around in one with my mittened hand and failed to find any. But they would have been easy to miss.

The journey was riskier than the squirrel may have realized. Not five minutes further on, a red-tailed hawk sailed low across the trail and dropped onto the snow, though after what I could not tell. I assumed it was after a rodent of some kind, but it caught nothing. It seemed to steady itself against its right wing for a moment, then scrambled up into a small dead tree that was propped against another. The hawk perched and let me approach to within ten or fifteen feet, close enough that I got nervous. He could have taken out my eyes if he’d wanted to. But he waited, still, for more than five minutes before flying off. I looked where he had hit the snow, and there was a wing brush, but no tracks that I could see, no evidence of rabbit or squirrel or mouse running off. Perhaps the hawk had been hunting by ear.

That Friday night, before daylight savings time, when it was still dark enough in the evenings to settle in for reading right after supper, I read Jason Allen-Paisant’s poem “Naming,” which includes these lines:

The urge I feel is
to give things names but

everything is already
named

To name things would be
perverse

perhaps the place within
will always escape the name

Jason’s poem has walking the woods with me for the past month, as we transition from winter back into to the seasons of naming. By the 27th of February, temperatures were near 50F. Midges cycled up and down in sun shafts angling through the trees. White bear sedge shoots were an inch tall. Springtails leapt in the bare soil sheltered beneath logs, and sow bugs and pale baby millipedes coiled and crawled in the leaf litter piled at the bases of trees. The snow was melting and slushy, but the soil was still frozen beneath it. I expected to poke through the slush and find the soil plastic, muddy; but although the R-value of snow decreases as it melts, like compacted fiberglass insulation, it was still cover enough to hold the warming days at bay. The south-facing slopes were mostly melted clear, though, and at the edge of the frog pond in the middle of Maple Grove, there were wild onion shoots about an inch long and shoots greening up at the tips of the wood violet rhizomes. I scanned the slope for false mermaid seedlings, but I couldn’t find any: by this time last year, they were already evident. The asters were beginning to grow. I found a great-horned owl pellet, I’m pretty certain, but enormous, and inside was what appeared to be a skunk vertebra. Great horned owls are said to eat skunks, so I shouldn’t have been surprised, but it’s stunning to find such a large bone inside an owl pellet.

The snow was melting away from the logs like water sloshing up against trees fallen at the edge of a lake, caught in mid-wave as the cardinals whistled and the red-bellied woodpeckers barked at each other. I put my hand on a slender sugar maple and felt what I thought was a dried leaf give way, flutter to the ground. But it was too soft for a leaf, and I picked it up off the snow to find it was a gray moth, I don’t know what kind, wings folded over its back. He rested in my palm for a couple minutes, warming, rustling, then launched himself from my hand. I watched him fly to about fifteen feet high and forty feet off into the woods before he disappeared against the trees.

Brooklyn and I were back the next morning, the last day of February. Maple Grove was thick with fog, snow sublimating into the atmosphere. At a distance of 100 feet or so, I could not be certain where the snow left off and the air began. Plants are like this, dissolving into soil. Thoughts evaporate like this if you don’t write them down, concentrate them. To name things would be perverse. But we don’t really have a choice.

The sandhill cranes returned in late February. Then March arrived with red-winged blackbird males declaring their territories, a white-throated sparrow warbling in the shrubs at the south end of Lyman Woods, tufted titmouse whistling in the neighborhoods. A pileated woodpecker arrived in Maple Grove and patrolled the east edge, drummed thuddingly. He may have been responded to: I could not tell for sure, but for 20 minutes or so I believed that there were three pileated woodpeckers in the neighborhood. Now, looking back, I am only confident about the one. Hazelnut catkins descended and let their pollen loose. Clusters of bluebell leaves tufted rubbery and waxy blue. Spring beauty shoots that had pushed through the soil in the fall resumed growing, sunburned and frost-hardened. Poodle moss shoot tips lightened with young cells like a dusting of chaff blown up against the bases of the white oaks. The first leaves of false mermaid emerged in openings in the leaf litter, crusted with rime. Baby tooth moss bristled with sporophytes overnight, hoods straight as the tips of sewing needles. The snow melted. Snow fell again one night. Rodent tunnels the next day wound dark as their roofs eroded to thin translucence. A green-winged teal died next to the sidewalk at Wallingford Park, where there is a marsh. Chorus frogs began singing.

We awoke on the vernal equinox to guttation droplets frozen to the tips of the lawn grasses. Brooklyn and I walked to Maple Grove as we had with Rachel exactly one year earlier, when Illinois had commenced sheltering in place in response to COVID. There was needle ice in the soil, spires an inch long reminiscent of les Orgues d’Ille-sur-Têt in miniature, the kind of thing I lie on my stomach to look at and imagine I am a few millimeters tall, walking through this fabulous landscape. It was like this last year as the country was shutting down, needle ice telling us it was time to get the notebooks and cameras out again, to start documenting. But with the world of humans shutting down, why keep up with the naming? We did so all the same. Now the world is opening back up, heading towards safety and normality again, looking toward the end of a long, hard year. Each is a spring like any other, and consequently each is unlike every other spring, always the novelty and familiarity of needle ice in Maple Grove, crumbles and crystals and ribbons breaking off in the hand.

Robins were chuckling and red-bellied woodpeckers barking at each other, white-breasted nuthatches honking, chickadees whistling. Trout lily shoots arched under the oak leaves. False mermaid had elongated and was pooling up in gaps in the litter. Common pocket-moss was brilliant green in the muddy ditches. Wild leeks had emerged from their sheaths and pierced the sheets of matted oak leaves. Wild garlic was two to three inches tall. False rue anemone leaf-lobes were tipped with frozen guttation droplets. Toothwort was clawing its way purple from the soil, unaccountably fragile for a thing being dragged through the mud. It was spring again.

And now I am rushing, as the work day is beginning. Back to naming, listing, categorizing, understanding in those ways. Morning is over. Winter is over. I wish you a good day.

6 thoughts on “Seasons of naming”