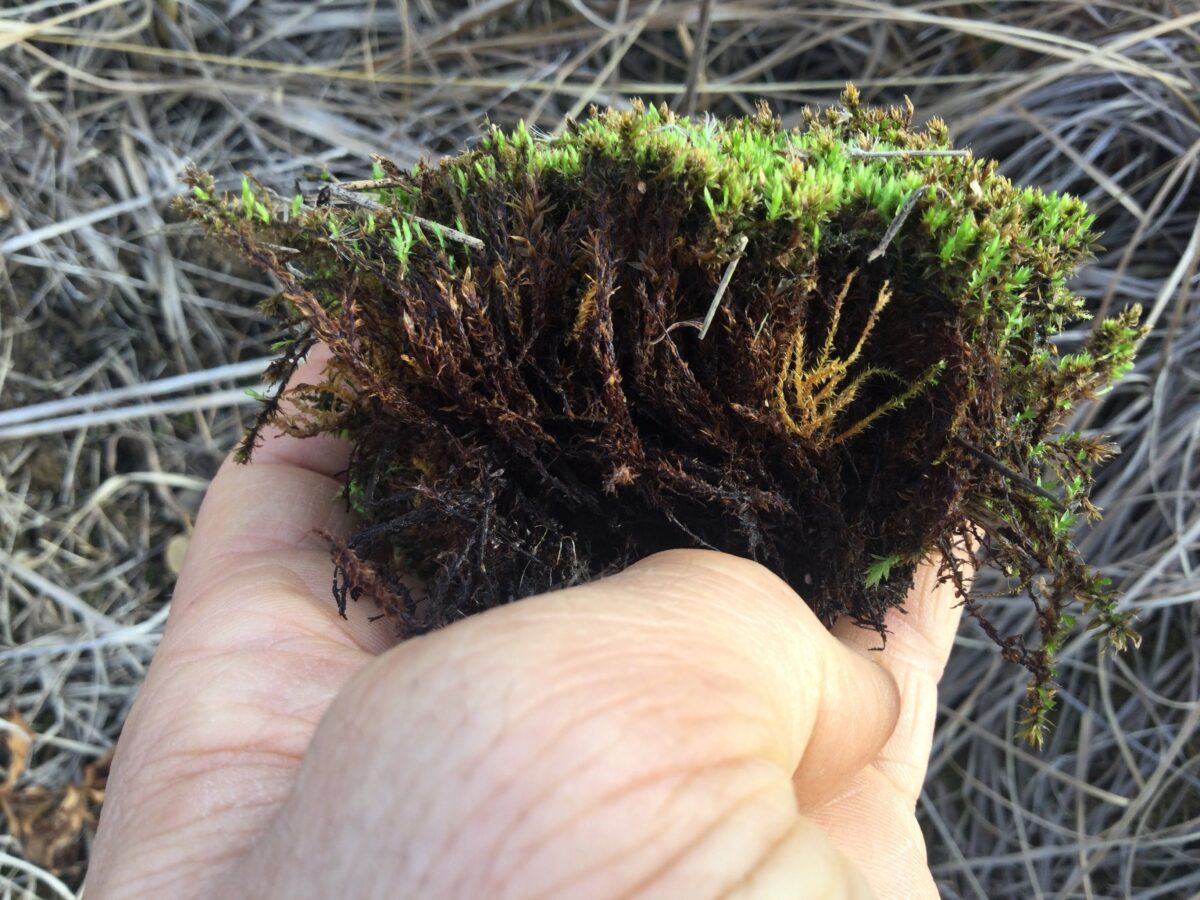 Monday we awoke to a sunrise like the second coming, clouds alight and diffusing out over the neighborhood from the horizon. I met Wayne Lampa at a marsh on the Arboretum’s west side, nestled between the East Branch of the DuPage River to the south, the Europe Collection to the north, for our weekly mossing. I meet him when I can. It’s not every week, and I missed for a couple of months during grant-writing this fall, but I aim for every week. Wayne had seen quite a bit in the marshes a few days before and was hopeful we’d do well today.

We found beneath the grasses an abundance of mosses, but only a few species. At first blush, the things we found looked all the same to me. There was little of the morphological diversity I see in the woods, where there are great broad leaves and feathery things, scrawny beards, trailers and standers, quilts and pillows and tiny forests. Here, everything was scraggly. Perhaps the marsh selects for this form. Drepanocladus aduncus with hooked leaf tips, leaves narrow and circinate. Hygroamblestegium, scrambling along under the thatch, happier in the open, but straggling and hairy, as we’d seen it in the woods. But most prevalent, seemingly everywhere once we’d found it, was Cratoneuron filicinum, matted together with shoot tips fingerlike, slender, sharply conical like a wicked witch’s fingertips in a movie. Wayne said this species was common in open calcareous wetlands—marshes, shores—but he was surprised to find it everywhere here. It was knitted together like felt. There was hardly a place under grassleaf goldenrod, Indian grass, aster and mint (which one? I smelled mountain mint on my hands, which it must have been, but I don’t recall seeing it) where the moss was not bound together as smooth as chamois over the soil. I slid my fingers under it and felt it between my thumb and forefinger, clamping it to feel its thickness. The upper surface was dry and brushy. Beneath, it was moist and conducive to life. There were sticks and grass leaves knitted into it, empty snail shells translucent as waxed paper. Through it ran what looked to be fungal rhizomorphs, like those of honey mushroom (Armillaria). There was a beautiful snag standing nearby, stripped of bark, that I took to be a bur oak. Armillaria is a genus of forests and woodlands, a tree-rotting fungus, and it runs through our woods everywhere. Can it also run through the prairie if there are trees nearby? How much life is there under these mats, and because of these mats? How much does the soil depend on this layer of moisture perched shielding it from sun, providing a substrate for bacteria and hyphae? What would this marsh be like without these mosses?

The marsh is burned some years, and there are charred tree branches the thickness of my forearm embedded in the muck here and there. On each one that I flipped over, thinking at first there might be mosses beneath, I found dime- or quarter-sized cobwebs of pale green filamentous algae hanging on in the dark and moisture. These algae must clothe the soil here as well, though subtly: tearing at the moss mats, I noticed none of the algal filaments that I found on the logs.

The mosses straggled up the bottom two inches or so of a few standing dead coneflowers or asters. These pioneers wound upward and became diffuse, braving the atmosphere for a little extra light. They reminded me of balloonists, climbing higher than most would dare, to the edge of the habitable world for a view that to them must be amazing: from the tips of their branches, they could see for several feet all around them! Craning their necks, they could watch the clouds going by past the tips of the grasses. But like a human at the margin of the breathable atmosphere that blankets the earth, a traveler on a flight home high above the clouds, crossing the Arctic Circle from above, seeing farther than any person should be able to see, their perspective is still that of a moss. Could they imagine they were in a basin built to hold storm waters? Mosses cannot imagine that such things exist, much less the larger things. They have no words for them. They are not thinking of the edges of the universe, but only the light, the desiccating wind.

We crossed a footpath into the north lobe of the wetland. It was a different world. Perhaps the water moves by more slowly on this side of the trail. Perhaps the chemistry is different. I’m not sure, but whatever the reason, here I noticed not the thin, ubiquitous mats knitted over the surface of the soil but instead spongy hummocks the size of grapefruits, composed of mosses about the two-thirds the height of my middle finger. They were not sphagnum, but like it in feel, drawing water up into the mound by capillarity, immensely absorptive. I pulled a clump of stems out between my thumb and forefinger. They were dark and radiculose, clothed in a dense coat of short rootlets, packed together, winding upward, tipped with rosettes of green leaves that squeezed together and strained outward to capture the sun. Wayne told me a name, which I wrote in my notes as “Pynostomum pseudo______ [?]” I’d come back to it later, as I do with all the names of all the mosses he tells me, until I know them.

We found Campylium stellatum in the marsh, Brachythecium scutum at the base of the spruce trees in the forestry plot perched along the northwest edge of the wetland. We stood by a European beech tree that has seen better days but whose branches were glowing with Candelaria concolor, a lichen you find on tree bark on nearly every continent. We ruminated on the success of the world’s mosses and lichens, asked ourselves, is everything everywhere when it comes to mosses? Wayne recommended a book, Forests of Lilliput; The Realm of Mosses and Lichens by John Bland. Then we said our goodbyes, and I ate lunch.

That afternoon I helped dismantle our experimental prairie for the season. We pulled fence posts and trimmed the plots down. Temperatures were above 70 degrees. We wore T-shirts. A chorus frog was singing from the pond down below the experimental prairie. But temperatures dropped on Wednesday, and by the next morning, there was a thick frost on every blade of grass, glazing the lawn nearly to the soil. There was needle ice in the turned-over edges of lawns where people were reseeding before winter. Bluebirds warbled as they flew through the neighborhood. There were juncos in the shrubs flanking the tributary of St. Joseph Creek that runs through Hummer Park. As I walked Brooklyn, I thought of the mosses in the marsh, frozen. By the time we reached the far end of the park, the sun was already burning the frost away.

A few days later, I looked up the cushion moss we found in the marsh. Its name is Ptychostomum pseudotriquetrum. It was once a Bryum, once a Mnium. I found a common name for it, “tall clustered thread moss.” I read in the Flora of North America treatment for the species that it is “one of the most common and widespread species of Bryaceae, absent only from the subtropics, tropics, and central Pacific Islands.” It is not as widespread as humans, but it gets around. No matter how far they go, mosses can’t know as much as humans do. We have poems and stories about the past and far-off places, and photographs. We know we have a history.

But try to figure out what the world looked like only 100 years ago, and things begin to get murky, even for us clever humans. It may be that each person actually knows only a little more than each moss, and only because we can read and write and talk, imagine, build models, make art. We all lack the wisdom of our species. Species may be individuals, but individuals are not their species. We can only know so much.

2 thoughts on “What do mosses know?”