All possible universes exist until they are observed; and then only the observed states exist. 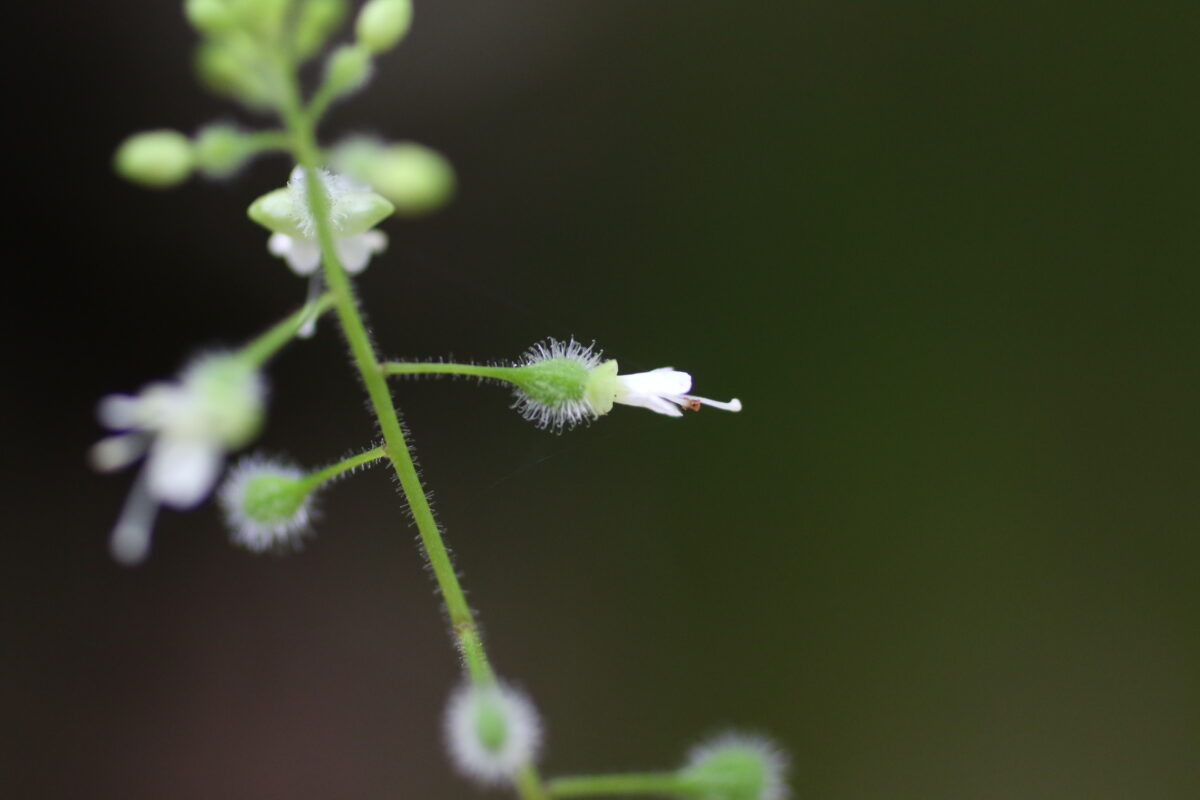 We are in the season of slime molds and tiny lights. On the rotted ashes, I can find a half a dozen species: plasmodia crawling yellow-netted over the surfaces; spun-glass grains of rice suspended on stalks the breadth of a horse’s hair; unearthly orange orbs the size of swollen mung beans, exuding an orange latexy glue that seems it could not be natural; dog-vomit slime mold, honeycomb coral slime mold; white spheres like fishes’ roe stuck to the side of the log. White jelly fungus and Crepodotus shine on rotted logs. The wild leek inflorescences have been hanging like comets for the past week, flowers on the cusp of opening, inflorescences strewn across the slopes like Christmas decorations. Enchanter’s nightshade flowers with petals barely longer than a grain of rice are open along every trail. The forest is a wonderland of the exotic and pricked throughout with illumination.

Last night, about 9:00 to 9:30, I walked through Maple Grove on my way home from a scout meeting on the far side of town. I am not in the habit of visiting the site at night, so I do not know whether, as my eyes recovered from the streetlights in the first few minutes of the walk, it was that my feet are accustomed to nighttime trails in general or that they know these trails that allowed me to walk without flashlight, without always seeing the light of the trail lit up ahead of me, but still knowing before my foot fell that I was not about to step off onto the soil at the edge that gives around the edges of your boot-soles. Trails stretch out at night and look unfamiliar. The 500-odd feet from the parking lot—through the woods to the trail that turns north and runs alongside the Avery Coonley School, which I often think of as throw-away time, a couple minutes of incidental observations in a trashy woods transitional woodland on my way to the good stuff—stretched into a journey under arched and crowding branches that I did not recognize, that might have been the woods I know after three years of neglect. The darkened woods were pierced with fireflies toggling on and off, one species floating parallel to the trail, one species blinking on for a fraction of a second and then rematerializing three feet away, blinking again, over and over at even intervals.

The woods opened out as I headed downslope. For several hundred feet, the lights of the school passing on my right made it almost impossible to see the path. The east face of an individual bole or mossy log would light up as I approached it and then pass away, and my vision was largely obscured beyond the haze of the light canting between the trees. As I passed the school, the woods grew dark again, and the fireflies seemed to brighten up, and now they were everywhere. The woods filled up with them as I walked down hill and the trees opened up toward the marsh at the base of the hill. When I reached it, I was inside a cloud of fireflies extending up about 20 feet and in all directions, filling space, twinkling at arm’s length and seemingly infinitely far away. I had the sense I once standing on a moonless night in the foothills of the Alps, outside Dieulefit, France, where the lights from the hillside were the same magnitude as the stars above them, so we were surrounded by stars above and stars below. I felt that with a jump I could launch off into space and float indefinitely.

All possible universes exist until they are observed; and then only the observed states exist. The sex lives of fireflies are like this. They wink in and out through the summer, invisible and infinite in variety until we see them, immersed in a previously unobserved universe of lights.

8 thoughts on “Fireflies and tiny white flowers in early July”