Wild leeks have been hanging for weeks, inflorescences out but flowers mostly still unopened. 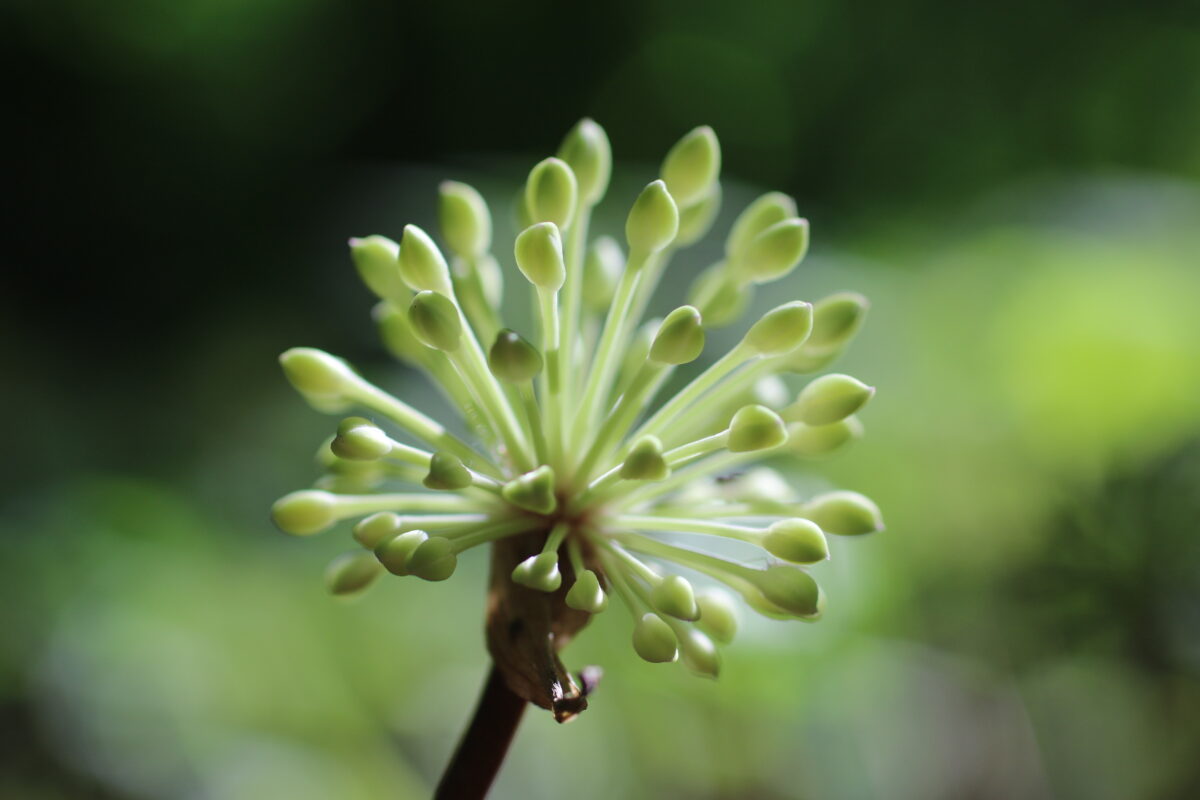 This morning at about quarter to eight, raindrops that fell on Maple Grove last night percussed against the subcanopy leaves, shaken down by the wind. Aborted red oak acorns had been shed on the trail overnight. A red-eyed vireo sang. A hummingbird inspected the bridge as Brooklyn and I crossed it, then perched in a slender dead sugar maple for a moment before disappearing. We reached the far side and turned as the wind picked up again, a small breeze that sent a shower down onto St. Joseph Creek for about ten seconds. A moment later, the first cicada of the day started singing from high above us.

The forest year advances slowly through the thick of summer. False nettle inflorescences are about the breadth of oak catkins but stiff and tipped with tiny leaves or bracts. They have been for a week or two. Lopseed flowers have reached various states of maturity. Rope-like leaf mines have appeared in the jewelweed and hackberry leaves, blistering like claw scratches. There are thigh-high Jack-in-the-pulpit plants with leaves as long as my forearm and fruits that range in size from bb’s to corn caryopses. The hooked achenes of white avens are hardening and hairy. Their styles are bent over near the tops to form hooks, but they are not yet stiff enough to catch on my socks. Bristly buttercups unburdened of their flowers are stretching out and sopping up sunlight. Golden ragwort leaves are the size of dessert plates.

Brooklyn and I walked to a fallen white ash that she favors. She almost always jumps onto it to see what’s going on. I climbed up with her today, and I see why she likes it up there. We were standing next to a soft mound of jewelweed that had opened in the gap left when this and perhaps another ash had fallen, and from atop the ash I could see across the entire colony. It looked like an enormous pillow. It reminded me of a passage in John T. Curtis’s Vegetation of Wisconsin that I had read earlier in the week:1

One interesting response to light is frequently seen in mesic forests in which selective logging has been practiced so that large openings have been made in the canopy. The yellow jewelweed (Impatiens pallida) regularly forms an almost pure stand under such openings. This succulent and tender annual is very sensitive to light and is markedly reduced in height at diminished intensities. The colonies thus take on the characteristics of an integrating light meter, with the tallest plants in the center of the colony and shorter and shorter plants toward the edges. They produce contoured mounds which reflect the chance peculiarities in shape of the canopy opening with surprising accuracy. The wood nettle (Laportea canadensis) also demonstrates this phenomenon at times.

It seems that John T. Curtis, inveterate scientist, didn’t want to let go of the image: “shorter and shorter plants toward the edges,” he tells us, when “progressively shorter” would be more succinct and more precise. I am sympathetic, because I also don’t want to leave these rolling sheets of jewelweed that fill the forest through the long summer. The extra “shorter and” gives us another moment to linger by edge of the jewelweed colony before we move on.

The mosquitoes descended and hassled us, and there was a moment of rain. Brooklyn got excited, spun and panted and bit at the air. We hurried on toward the ephemeral pond in the lowest part of the woods. I had met a gentleman on this trail Friday evening who has lived in an adjoining home for 25 years. He told me that every year a snapping turtle walks through their backyard to lay its eggs, and he showed me a photo. He told me the pond used to drain directly to St. Joseph Creek, but artificially, and that what I know as “the ephemeral pond” only came back when the drain plugged up about 15 years ago. He bemoaned the death of the trees; I rooted for the pond, but only to myself. It is rimmed with Carex squarrosa and C. lupulina and is one of my favorite spots in the woods.

We climbed upslope and stopped at a thick old ash lying on the ground, decorticated, bark unrolled on the soil beside it like a bathmat flipped upside-down to dry, the ridges and furrows knitted together with Armillaria rhizomorphs. On a rotten log further on, there was a withered cluster of parachute mushrooms (Marasmius sp.) with stems hardly thicker than the hair of a horse’s tail. On another log was a slime mold, something white and soft and still a little filamentous, either something I’ve not met this year or Ceratiomyxa in a slightly different outfit. These and the mosses are like casual acquaintances or colleagues I meet occasionally at meetings, not old friends: change their glasses or give them a haircut, and I may not be certain whether I know them or not. I’d like to know them better. Philosophy is really homesickness, an urge to be at home everywhere.2 The same is true of the natural sciences.

I checked each wild ginger colony we passed for fruits. The seeds appear all to have been carried off by ants while I wasn’t watching. And I checked every wild leek colony for open flowers. They were mostly still closed. They have been hanging for about a month, teasing us as they tune up on the slopes. I started noticing the flower scapes the first week of June, and quickly thereafter a few came into flower. Some of those early ones have fruited. But the vast majority have their fingers spread wide and tipped with closed flower buds. I wondered today on our walk out of the woods whether I had made a mistake and missed the flowers opening, but no: anthers blinked their eyes inside the few I tore open, not ready to come out yet. On the 5th of July, I wrote in my notebook, “along the west edge of the woods, the slope will be lit up with wild leek inflorescences in a week or so,” but here a week later they appear to be no further on.

We’ve reached the long days of mid-summer. In spring and fall, the temperatures and shorter days squeeze the plants through one turnstile after another, and they are mostly in tight synchrony. Plants bloom and fruit, rise and senesce in somewhat predictable fashion. No year is precisely the same as the previous, but events are gated. In mid-summer, the constraints of spring and fall loosen. The passageways widen. The plants are not as fussy about their timing. Tim Dee describes a day at this time of year as, “… stalled… muggy, all traction spent; the year here begins now to coast for a month or more.”3 I lose track of what’s happening in the woods for weeks on end. When I haven’t had a chance to visit for a week or two, I return to find things have ratcheted on a bit further, sometimes a little, sometimes a lot. I can never be quite sure in summer how far they will have gone. But knowing what I’ll find in general terms while not knowing the particulars until I see them makes me feel at home.

I’d do better to stop guessing when the leeks might open. They’ll be magnificent whenever they get around to it.