The canopy has all but closed and the spring ephemerals are giving up, shunting everything they have left to the next generation. 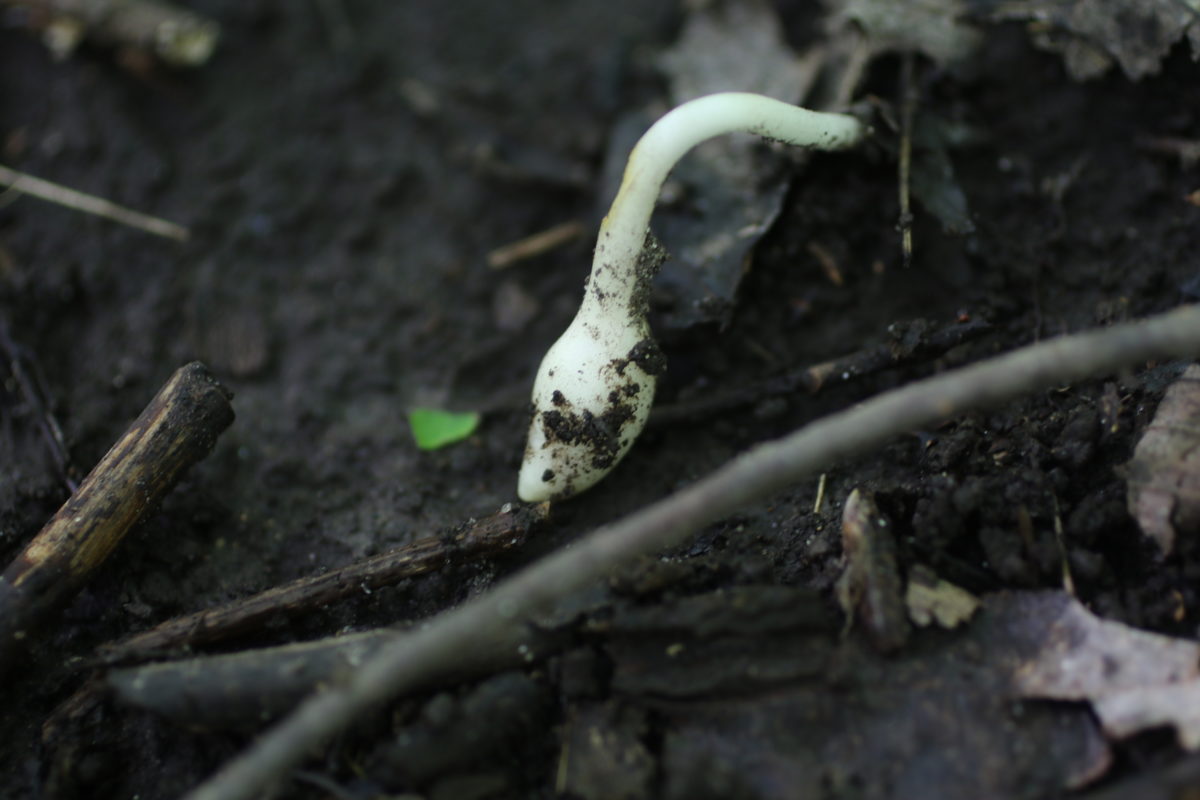 The woods are carrying us into summer. Two months ago the shelter-in-place order started in Illinois, and I was shocked into a sense of pandemic focus. Many people were. The trails stream this spring with people walking, talking, looking around them. I walk Maple Grove regularly throughout the year, but I am on closer terms with the rhythm of this year’s spring than I have been with previous springs. Daily, the woods change. The trees exhale and are still: warblers and vireos settle in their branches. They inhale, and sugar maple leaves inflate, flatten out, pimple with spindle galls. They take another breath, and the oak leaves grow an inch in a week, and the ironwoods shed their catkins. The leaves 30 feet above the faltering spring ephemerals capture the sunlight and cast a shadow across the fading forest floor.

Wild leeks have become variegated and flaccid. A few weeks ago they were as broad as cow’s tongues and dark green but becoming ragged. Now they are spent. False mermaid has yellowed and flattened to the soil, a tangle of branches and swelling nutlets. Dutchman’s breeches is as pallid as a manila folder. Toothwort is almost yellow, and the fruits are thickened where the seeds are growing, like a snake’s belly distended by undigested mice. White trout lily leaves are faded and barely mottled any longer, and the white, wormlike rhizomes that have been arching from the ground for more than a month have become far more common. They’ve given us a new reason to scrape aside the leaf litter as they breach the soil, ghostly white, turgid but brittle. Each one is tipped with a bulbous thickening where next year’s young plant grows, hidden in scales, packed by the mother plant with all it will need for next year. The trout lily leaves recline as they pass the baton, shunting the last of their resources to their progeny. They will be gone soon.

A veery sings, then a wood thrush. These are summer birds, leading me into the woods with the songs of indigo buntings, tanagers, red-eyed vireos and wood-pewees. The trail has spread in the rain of the past two weeks. It is lined with bristly tufts of path rush and straight-styled wood sedge, which in one stormy night this week went from springtime exuberance to the trampled clumps of midsummer. The black-throated green warbler songs I now find a little disorienting. Have they been here for weeks? days? Shouldn’t they have moved on already? A northern parula zips up along the ladder of mid-May. Moonseed leaves are as big as silver dollars. Their tendrils arch over the ground. Wood nettles and jewelweed are knee-high, and the latter’s cotyledons linger yellow beneath the foliage like chaperones at a school dance, leaning against the walls in pairs, hardly visible in the throng, dropping off one by one as the dance comes to a close. By the end of the night you’ve forgotten they were there.

I have for more than 20 years told myself that summer begins when the canopy closes and the biggest pulses of migrating warblers have passed through and the wild geraniums are in bloom. Perhaps that was correct in Dane County. There, it was also the case that in the spring I would find a few geraniums wilting, then bending over, and inside the stem a larva. I have never seen that here. Instead, I realized this weekend that I would do better to swap the geranium out and replace it with great waterleaf. They are in full flower now and are a more precise sign of summer in the woods, coming in after the geraniums, which are starting to fruit throughout the woods as the petals fall. I might have seen this years ago, but the old patterns had staying power. Virginia waterleaf came into bloom this past week as well, starting last week Sunday along the trails and now spreading through the woods.

Carrionflower (Smilax) has been vexing me this week. I had posted a photo of what I believed to be Smilax lasioneura in full flower about a week ago. Evan Barker and Matt Beatty, in a series of insightful comments on this photo that bear reading if you are interested in the herbaceous carrionflowers, pointed out that there has also been described a Smilax illinoensis, which intergrades with both S. lasioneura and the ostensibly tendril-free S. ecirrhata, the latter of which I thought I understood. The distinctions rest on the disposition of tendrils on the plant, the number of flowers per spike, the length of the stem at maturity. I had been bothered that I have never been able to clearly see distinctions between the carrionflowers in the woods I know best, and as I read the comments from Matt and Evan and looked more this past week, I was all the more aware of my ignorance. So Sunday afternoon, I took a moment to look at a 2013 molecular study by Pan Li and colleagues in which numerous populations of all of the eastern North American herbaceous carrion flowers were investigated with molecular markers. Having read it, I don’t feel so bad about my confusion. These data are not conclusive, but they are also not compatible with the idea that the species we have been trying to key out are genetically coherent entities. The authors asked the question of numerous individuals from each of these and related species, from multiple populations of each, “who are your closest relatives?” If these names we have been trying to apply referred to separate species, we would expect individuals to cluster by scientific name. Instead, in their study, Li and colleagues found individual plants clustering by geographic region. If oaks behaved this way, I would throw in the towel.1 For now, I’m skeptical that these three carrionflower species whose names I’ve been trying to apply are separate species at all.

The pistillate flowers of Jack-in-the-pulpit are ripening into fruits. Davis’s sedge perigynia are swelling and the spikes are starting to nod. Veins are inscribed distinctly into the perigyia of Hitchcock’s sedge, and the lower sheaths bristle with hairs. False Solomon’s seal flowers are on the cusp of opening. The leaves of cow parsnip are enormous, and bur marigold seedlings whose cotyledons I have been wondering about have shown their true identity. Grasses of a few species are coming into flower. Orchard grass inflorescences have emerged from the sheaths. White baneberry are in full bloom. False rue anemone flowers are still hanging on, but most have dropped their tepals and sport ripening fruits that radiate out like stars. False mermaid and annual bedstraw are heavy with fruits.

It’s Memorial Day as I write this, and everyone is on the move again. Not just people, either: monarchs came back to the garden yesterday. This morning, we had terrific rain, then it cleared up. Brooklyn and I walked past the school and watched a fox trot by with a rabbit dead and lying crosswise in its mouth. Brooklyn was beside herself and spent two minutes waking the neighborhood up, then rolled in the grass out of sheer excitement. We passed the home of a woman who waves out the window almost every time we walk by. She and I gave each other a thumbs up. We passed the park that fills with water when it floods. We looked for catkins on a friend’s new ironwoods, just planted a year ago.

We are gearing up to head back to work, little by little, beginning in June, and I find that the focus I had only two months ago, when everything changed so abruptly, has begun to dull a bit. I still notice more than I did before, but my attention in the woods is no longer heightened as it was when we were first all sent home from work and school and were so disoriented and so upset all the time. With no good reason, only acclimation, we are growing accustomed.

When Brooklyn and I were within a few blocks of home, the wind kicked up and rattled the leaves of the trees. The rain started up again, but only beneath a Norway maple shaking straight ahead of us. Rain fell out of the tree and nowhere else, as though the tree itself were the cloud. You could have drawn a curtain around the tree and had a shower inside. Then the wind stopped, the rain stopped, and Brooklyn and I headed home.

6 thoughts on “Passing the baton in the forest understory”