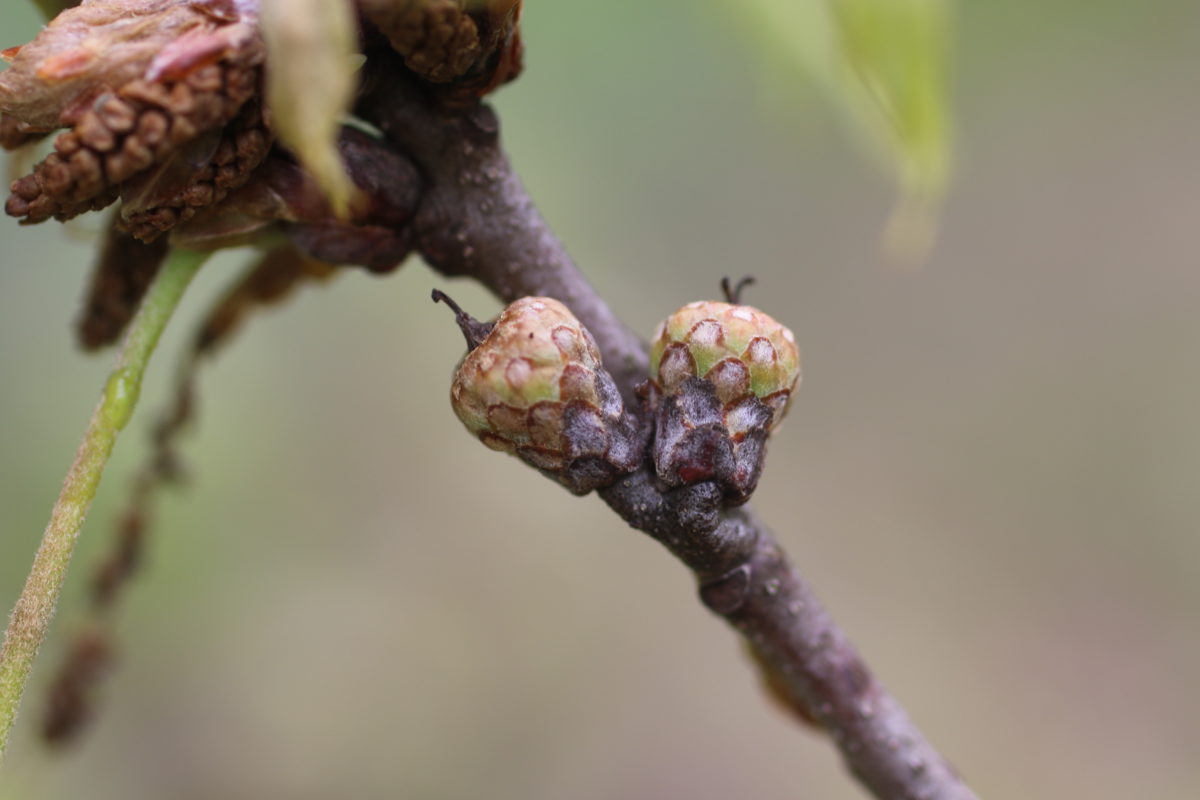 For most of last Thursday, we could barely get Brooklyn outside. It rained almost incessantly. In the afternoon, we took a soggy walk around the neighborhood illuminated by a brilliant cedar-apple rust that had burst out on the neighbor’s juniper. The rain continued through the night and was so loud that everyone in the house was awoken at least once. By the time we walked through the neighborhood Friday morning, the heavy rain was passed, and in its wake entire flocks of migratory birds had blown into town. Brooklyn and I heard chestnut sided and golden winged warblers, an eastern wood pewee, and what sounded to me like a yellow throated vireo within two blocks of our house. The toads droned from the marsh north of the school, full throated and invigorated by the warm, damp morning.

I spent that day in the Arboretum’s East Woods, on a permit to collect oak leaves that had been harvested on our behalf by the gray squirrels. Red oaks and Hill’s oaks were flowering. The trees were filled with birds. Wood thrushes and veeries sang as I scouted the ground beneath towering red oaks, collecting shoot tips with fresh leaves still attached. Oven birds called. Warblers and vireos moved constantly. Indigo buntings and eastern wood pewees had arrived to join the great-crested flycatchers for the summer. I could not concentrate on the birds as I would have liked, because I had oaks to focus on. The work went more slowly than I expected. In my walks over the past week and a half, it had seemed that every oak was pitching shoot tips down onto the ground. But on Friday, I could find shoot tips with leaves in good enough condition for sequencing beneath something closer to one in four or five trees.

By the end of the day my concentration was flagging, and I was distracted by the yellow reticulum of false mermaid that is everywhere right now, pulling my eyes along to blooming Jacob’s ladder and pools of wild ginger. Wood poppy flowers had been battered in the rain, but the capsules were full and hairy and sopping it all up. White trilliums were still blooming but also looked beaten. A prairie violet was flowering in an opening in the woods. Spathes had formed on the wild garlic. Wild hyacinth had begun to flower. Black currant, chokecherry and wayfarer’s bush were in bloom. A solitary mayapple was flowering. Rue anemone fruits were hardening up. I wrapped up the oak collecting and headed home, in short sleeves by this time, backpack full of collections.

Sunday was another day of nonstop rain, and when I returned to the Arboretum Monday morning I found the East Woods saturated. Running water had dragged entire logs across the road. The red oak and Hill’s oak leaves had grown to several inches long and were all spreading. White oak leaves by contrast hung from the shoot tips like shrouds. All were festooned with aments, but only in the red and Hill’s oaks were the anthers dangling from their filaments: in the white oaks (and the bur oaks as well, I suspect, though I didn’t look closely at their catkins), the stamens were bound into tight little knots. Eastern wood pewees and indigo buntings sang from morning till late afternooon, joined intermittently by scarlet tanagers (chick-burr), rufous-sided towhees (drink your tea), and field sparrows. Aside from the woodpeckers, the birds of winter were mostly quiet, but not inactive: over the course of about five minutes I watched a white-breasted nuthatch return three times to feed caterpillars to its baby, which was resting in a cavity in the side of a white oak.

Wild geranium seemed to have gone over the hill since Friday. While it was still blooming throughout the woods, the cranes’ bills had started to form, obvious on flowers that had shed their petals. The other flowers had all inched along just a bit. Blackhaw, whose inflorescences had been masses of mungbean-sized buds on Friday, was open for business. Curly-styled wood sedge stigmas had emerged and were arched, heading into position. Bur-reed sedge and awl-fruited sedge were flowering. White baneberry flowers had begun opening at the bottoms of the inflorescences. Mayapple flowers were full-faced alongside the road. Hairy sweet cicely and aniseroot were white with flowers finer than baby’s breath or lace. Openings in the woods had exploded with shooting stars, wild hyacinth, or starry Solomon’s plume.

At the end of the day, I tramped through a section of marsh I had never been in before and found a good collection of Hill’s oak. I started working on this species 15 years ago this spring, and I find it comforting to come back to. I am fond of the shape of its leaf, of the tiny acorns that were fertilized last year developing now on the branch, of the places where it likes to grow: dry slopes with perhaps a touch of ground water, bumps on the landscape overlooking a marsh, woodland edges just beyond the sugar maple shade. I was reminded of a passage I read this past week in Robert Macfarlane’s The Old Ways, written in 1697 by a traveller and writer named Martin Martin: “It is a piece of weakness and folly merely to value things because of their distance from the place where we are born.” Hill’s oak is one of the most familiar trees in the region. It could be a poster-child for commonness. Yet standing with my feet in the muck, I felt I could spend decades more getting to know this species and still have a lifetime’s worth of work to do on it.

At that moment, in quick succession, a least flycatcher and an olive-sided flycatcher called from the woods just uphill from me and the Hill’s oak: Che-bek! Quick three beers! Two cousins, these Empidonax flycatchers, whose familiar calls are, like the Hill’s oak, become more precious to me as they become more familiar each year. With each call, I advance one more step along the year.

The rain was starting up again. I visited one more field, collected my last Hill’s oaks for the day, and headed home.