Anthers descended this week on the red oak stamens, and the sugar maple leaves are almost fully expanded. In spite of a late-season frost, the canopy is almost closed. 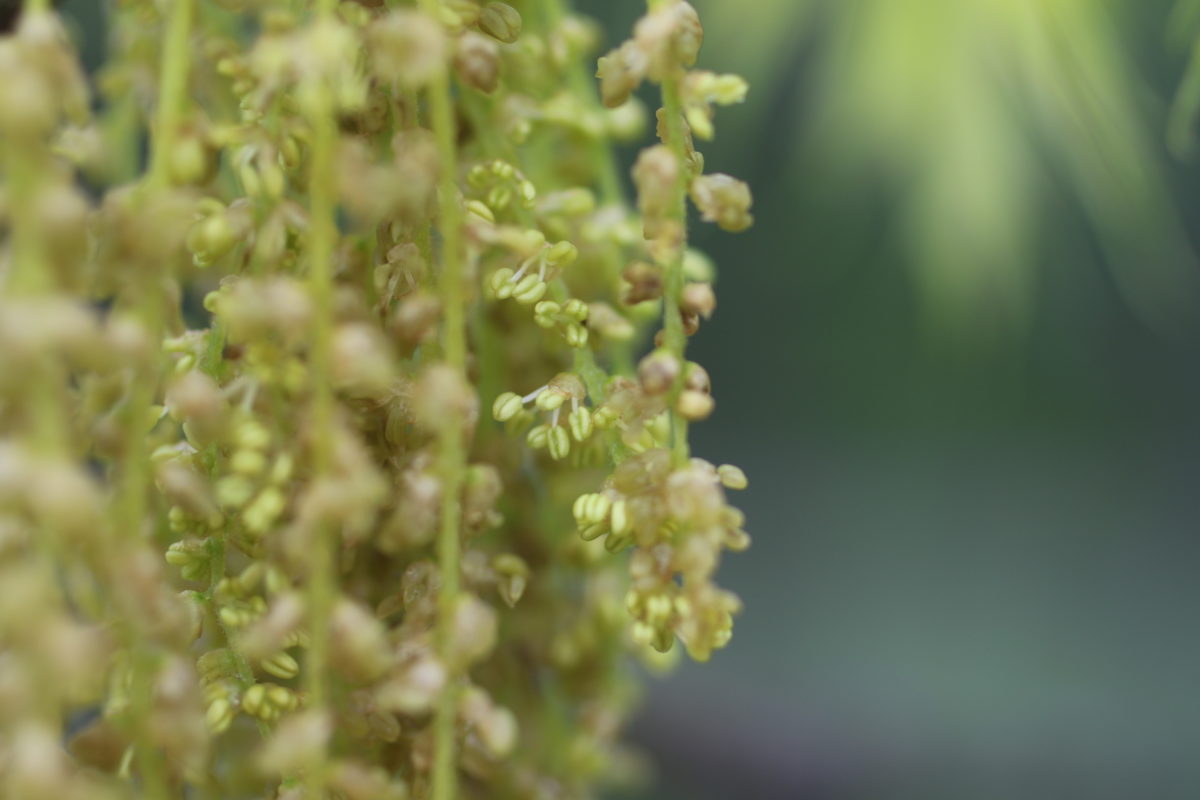 A late-season frost near the end of the first week of May withered the youngest sugar maple leaves throughout the region. The damaged leaves were widespread: on street trees, in the canopy, in the midstory, in saplings down at eye-level that I would have thought would be protected from the worst of the cold. Some fraction—a twentieth? maybe a bit less?—of Maple Grove’s sugar maple leaves curled to uselessness in a single night. Leafing out early in the year in the temperate zone puts you at risk of finding yourself outdoors without protection before winter has had its last laugh.

In spite of this loss, the sugar maple foliage had nearly closed in the canopy and the midstory by Monday. In synchrony with the maples, the young white bear sedge leaves appeared to have inflated to full width over the course of a few days, sprinting as though in anticipation of how much harder they will have to photosynthesize in the near-total shade of summer. Many other species responded by running to the end of their annual cycle. Toothwort were yellowing, and the wild leeks were becoming pale, yellow or variegated and flattened, as though they had been sat on by elephants. The false mermaid was yellowed and recumbent. The canopy wasn’t completely closed, though: red oak leaves were about an inch long and the anthers looked ready to open, though they weren’t shedding pollen yet; the bur oak leaves were still perfect in miniature, but identifiable at a distance of fifteen feet or so without binaculars; a single basswood leaf filled my palm; hackberry leaves were draped from the tips of the branches. We still have a week or so to go, maybe a bit more, before the canopy is filled in completely.

Inflorescences had formed on nearly all of the false Solomon’s seal by the beginning of the week. Floral buds were out on white baneberry, and the first leaves were emerging on moonseed. Wood nettles had grown large enough to sting one’s hand, but not large enough to cause real pain. Petals had fallen from the blue cohosh flowers, and the false rue anemone was producing sharp-tipped achenes. The scapes of Dutchman’s breeches, the same ones that looked like blown-glass miniatures less than an inch tall with incipient white floral buds the week we went into isolation-by-household, were hung with capsules. Downy yellow violet corollas were dropping as the capsules swelled. Missouri gooseberry petals were reflexed like shooting stars. Wild ginger flowers seemed to have peaked, but the ovules inside were still pulpy-white. Lady fern was almost unfurled. Wood’s sedge culms stood erect and in full flower like high-quality, fine-tipped paint brushes stuck into the soil. Hairy sedge was heavy with fruit, while the pistillate flowers of James’s sedge ranged from newly receptive to ripening. Pennsylvania sedge, which I’d given up on weeks earlier, was still ripening on the culm.

In the middle of the week, Brooklyn and I watched two squirrels build a nest in a white oak cavity in the neighborhoods outside the forest preserve. One shuttled mouthsful of dried leaves up from the ground and disappeared into the oak with them, then reappeared and ran back down. The other gathered twigs and leaves from the upper branches. Brooklyn was beside herself watching all this squirrel activity, and she devoured the soft orchard grass foliage along the roadside in her excitement.

It was dark and quiet in the center of the forest. Blue-gray gnatcatchers were calling. We found a small patch of early meadow rue in full flower, the male flowers dangling with stamens that rustled in the barest breeze, the female plant a few feet away frosted with stigmas. Basswood leaves had grown just a bit and were hanging and slightly cupped. Prickly gooseberry fruits were developing, and bristly fruits were choking off the corollas at the tips of annual bedstraw. Largeflower bellwort fruits were swelling. Bloodroot capsules were as thick as green beans. Spring beauty flowers had almost all fallen, and seeds inside their capsules were as dark as buckeyes. A least flycatcher called che-bek!

On the walk out through the neighborhoods, we stopped to watch a bumblebee patrolling low over a neighbor’s garden of Solomon’s seal and white trout lily fruits and withering leeks. A blue-winged warbler called bee-buzzz from the trees flanking the road. I don’t know if this is quite right, but when I hear the blue-winged warbler sing for the first time each spring, I think we are somewhere near the midpoint of migration.

Saturday morning, end of the week, Brooklyn and I could hear the chorus of American toads from the center of the woods as we stood at the end of the bridge over St. Joseph Creek. Brooklyn tensed as we crossed over the bridge. We stopped in the middle and watched the samaras stretching out at tips of the silver maple branches above us. We followed the toad song inward toward the pond in the center of the woods, passing a burning bush in flower, great waterleaf floral buds massed up like spiders’ egg sacs, and the leggy prairie trilliums. The pond was not in our line of site, but the toads’ song carried over the hill, following the contours of the land and filling the spaces between the flowering buckeye, the yellowing wild leeks, the calf-high jewelweed whose cotyledons have paled and grown useless as they lean out over the wreckage of false mermaid in fruit. Brooklyn grew increasingly agitated as we approached the pond. She bucked and pulled, then trotted beside me anxiously as I ran her the last 50 feet to the crest overlooking the pond.

When we could finally see the water, Brooklyn relaxed. Perhaps having the noise so clear was a relief, overwhelming the high-pitched, distant sound with a nearby hum, the whine of a distant truck’s wheels spinning on the pavement drowned by the engine roar at close range. We stood for several minutes and listened to the ancient song of the toads, a song that precedes humans, as most animals’ songs precede humans. The toad song is about the short migration of individual toads and their feverish love. It’s about hibernation in the mud and emergence from a watery nest. It’s a song that does not know humans or dogs. It knows only toad things, but it knows them utterly.

We walked west from the pond. The first dead man’s fingers of the year had emerged from a spongy fallen log on the trail that runs behind the houses bordering the western forest edge. The fruiting bodies were a few millimeters high, no thicker than pencils. A black-throated blue warbler flew into the tree above the fungi, darted into and out of view, picking at insects along the branch, then was gone. Doll’s eye flowers were poised to open. Carrion flower was opened at last—I have been watching it for perhaps two weeks—and stunk of putrefaction. I know how it will smell, but I cannot see it in flower without leaning in for a whiff, just as if it were a flowering viburnum. We hiked past the eastern few-fruited sedge, whose perigynia were slender but inflating, and James’s sedge, the perigynia of which have gone this week from slender to orbiculate. We passsed knee-high Sprengel’s sedges draped with fully loaded pistillate spikes. We passed a sedge I have been wanting to call curly-styled wood sedge, but whose stigmas I am still watching for.

Near the end of our walk, we stopped for a few minutes to watch a warbler in the top of a narrow sugar maple. Brooklyn became restive after a few minutes. She has a good disposition and is a very good botany dog. She will stand for us while we take photos or study a plant with the hand lens. But with birds, where you have to stand for 20 minutes for one individual, she grows anxious. What is wrong? she wants to know. Aren’t we supposed to be moving by now? Perhaps she could become acclimated to birding. But not this morning.

The sugar maple leaves that were frozen and limp from frost damage at the beginning of the week were now shriveled and dried to a crisp. I squeezed one, and it crumbled to pocket scraps. I tucked the binoculars into my backpack, and Brooklyn and I left the warbler in the canopy unidentified. The toad songs faded as we walked out, bridging the weeks from spring to summer. One of the singers hopped by, and Brooklyn paid it no mind. We walked home surrounded by black-throated green warblers, the canopy closing overhead behind us and a summer full of eastern wood pewees and indigo buntings spreading out before us.