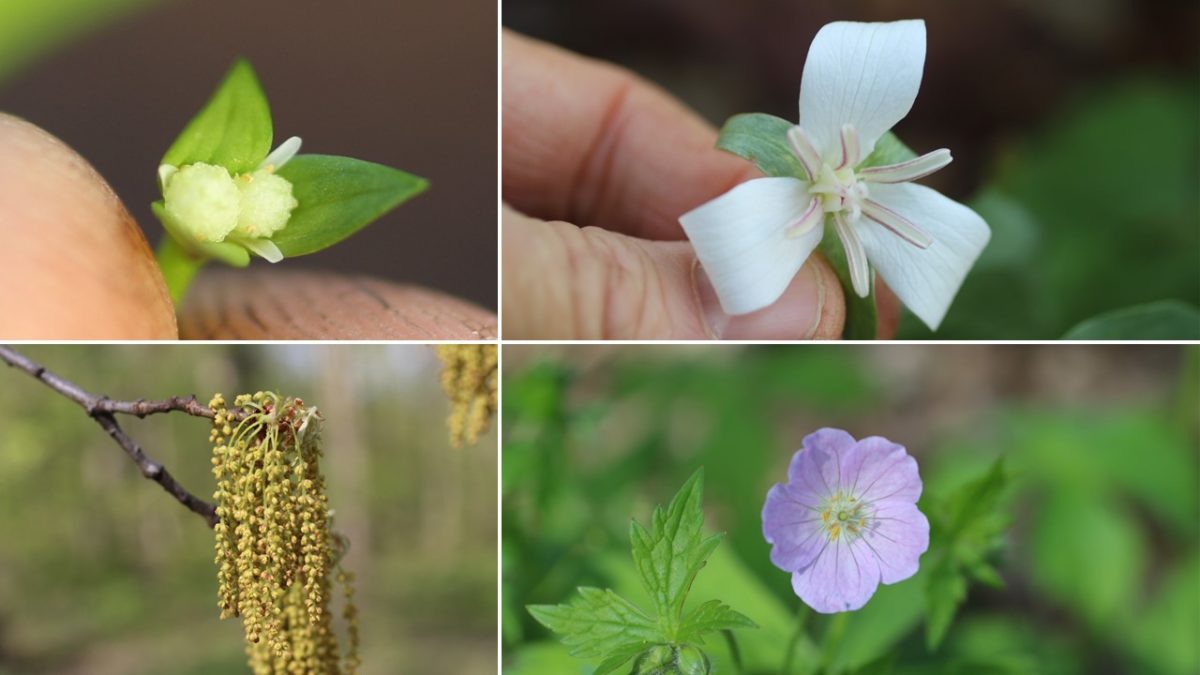 The redbuds were blooming on the first Saturday of May. Carex blanda flowered in a sidewalk crack and a great-crested flycatcher whistled in the neighborhood as Brooklyn and I walked to Maple Grove. At the forest, straight-styled wood sedge was flowering, and curly-styled wood sedge was about a week behind, spikes out but not yet opened. Anthers were flying proud the entire length of the staminate spikes on hairy sedge. White avens had bolted. Bur oak floral catkins were condensed and the leaves were tiny but immaculate, as though modelled for a tree staged outside the window of one of the Thorne Miniature Rooms. They had been nipped by squirrels and were falling all over the woods. White oak branch tips seen through binoculars were knobby with young leaves and catkin nubbins. I found a Hill’s oak shoot tip near the edge of the forest, dripping with flowers. The first wild geranium flowers were open. A northern parula warbler was dragging its short song upward along the teeth of a tuned comb. The great-crested flycatcher was crying through the woods.

With every new species of wren, sparrow, flycatcher and warbler that flies into town in the month of May, we ratchet one tooth onward toward summer. March and April always feel a bit like a train between cities, a time in which “here and there does not matter”1 and outside the window everything is constantly shifting, so much so that it is essentially standing still. This year, it feels especially so. Wood anemone and prairie trillium are still in flower, but the spring beauty have begun to fruit and the toothwort have almost all dropped their petals. American elms are shedding samaras into the gutters. We are still in spring, with hairy yellow violets, rue anemone and false rue anemone in beautiful full flower, but we’re barreling toward June.

This first week of May has wobbled between frosty evenings and days warm enough for ice cream on the walk home from downtown. The sugar maple leaves started the week clotted in the canopy and hanging limp from stiff petioles in the midstory. By Thursday night, they were nearly fully expanded, and the sugar maple canopy was about halfway toward closed if not more. Basswood has progressed from obtuse buds barely opening to leaves a few inches across. Musclewood catkins have loosened up and are shedding pollen. In just one week, the leaves of poison ivy, Virginia creeper, and wild grape have gone from creased or crumpled and embryonic to fieldguide portrait quality, crawling over the logs and stumps and the bases of the standing trees. The muddy sloughs and springy slopes throughout Maple Grove are illuminated with the full-faced flowers of swamp buttercup, and that first wild geranium bloom opening on Saturday morning is now a forest full of geraniums coming into full flower over the course of the week

The understory is darkening and pivoting toward the solstice. False mermaid grew shaky and pale this week and stumbled as the nutlets growing inside its flowers began to sap what it had worked hard to sequester away. Already the plants are leaning against one another and growing weary under their own weight. Every bloodroot has shrugged off its petals and is leaning back to sop up the last sun before the maple leaves fill in the canopy. Wild ginger is doing likewise, squatting in colonies over meat-colored flowers. Trout lily capsules are turning toward the sky. The leaves will soon start yellowing. Wild leek leaves are becoming dilapidated.

I heard a report this week that people’s travel nationwide turned abruptly back toward their pre-COVID levels on the first of May. We are already becoming comfortable with what seemed so foreign to us a few weeks ago. Kids rarely ask to pet Brooklyn any more, and they know to wave politely from a distance. On our walks, she will often stop if she smells or hears something funny. If it worries her badly, she’ll sit down and refuse to move. She’ll look up at me. We have to wait for Brooklyn to decide it’s okay before we can move on. If there’s anything amiss, anything at all, she stops dead in her tracks. She’s pretty consistent in this way. Myself, I don’t whether to sprint down the trail at times or stand in one place, watching the leaves unfurl.

In the meantime, nodding trillium and Missouri gooseberry flowers have opened. Black currant is in floral bud. Prairie trillium is shedding pollen. Cleavers is in bloom and stands upright in stiff colonies thick with individuals or sprawls against rotting logs and grows whorls of leaf blades as long as my pinky. Sprengel’s sedge pistillate spikes has begun to nod. Small-flowered buttercup is up to my knee and producing achenes. The twisted yellow petals of largeflower bellwort have paled and are falling to the ground, and the ovaries inside are nearly as big as green peas. Common yellowthroats and toads are singing from the marshes along with the occasional peeper. A pair of thrushes is frequenting the pond in the middle of Maple Grove. Water striders are fishing in the eddies of St. Joseph Creek.

The plants have gone on living their lives as though humans’ lives had not changed. As a consequence, we’ll tic our way into summer plant by plant, just as we always do. It just isn’t the same summer.

4 thoughts on “Pivoting toward summer, first week of May”