Chimney swifts are back in town. Trout lilies are fruiting, white baneberry foliage has unfurled, Virginia creeper leaves are opening. The canopy sugar maples and red oaks are leafing out, and the red oaks are blooming. 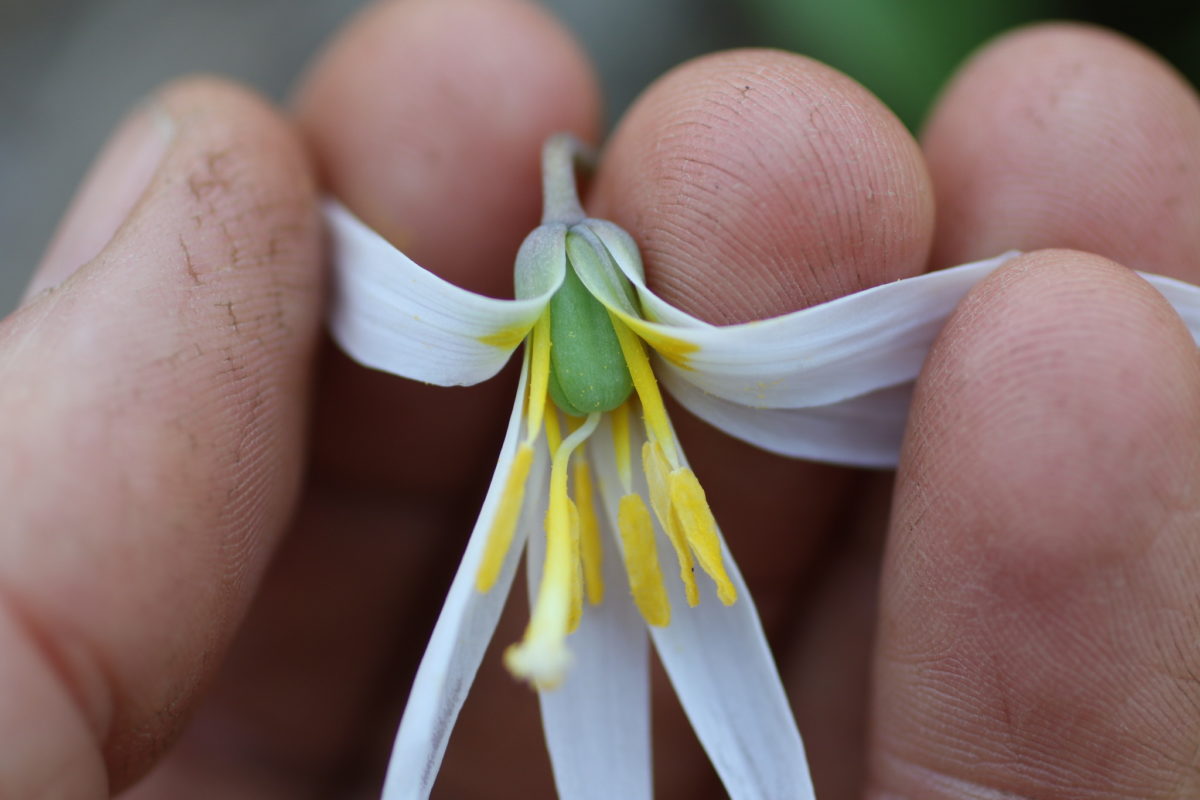 Last night, a little over an hour before sunset, the sky had cleared out and the sun was bright, and the young leaves of the canopy sugar maples and red oaks in Maple Grove Forest Preserve were aflame. Sugar maple buds in the understory had started to break at the end of the first week of April, and leaves have been opening progressively from the forest understory upward through the midstory to the canopy over the past three weeks, but this was the most action I’d seen in the canopy yet this year. Young shoot tips of red oaks sprouting tiny leaves and catkins were strewn all over the trails. The squirrels seem to love chewing the ends of branches particularly when the catkins are out, and they had clearly had a good day of it.

Sugar maple seedlings that have borne only straplike cotyledons for a couple of weeks are producing bumpy, misshapen foliage leaves that only weakly resemble the adult leaves. Give them time. The foliage leaves on great waterleaf opened while I wasn’t watching, cotyledons retiring beneath them on skeletal long petioles that stretch out perpendicular to the emerging leaves. Virginia creeper leaflets are awakening furry-backed at shin-height, pointed upward or drooping at the ends of branches scrambling over the forest floor and up along the sides of fallen logs. One of the carrion flowers is growing straight up and producing inflorescences. White baneberry has spread in only a couple of days from a knot of tiny leaflings to a spray of foliage, the flowers clotted up at the edge. Herds of jewelweed are massing up in the mesic hollows. They are the long bridge from leaf-out to leaf-fall in late September. Jewelweed will carry us all the way, senescing only when summer is really over.

White trout lilies have begun to fruit. Most still bear petals, but about a third have dropped their corollas and are straightening out, thickened ovaries bearing the elongate style with coiled stigmas at the tip that gives this plant one of its common names, adder’s tongue. Solomon’s seal floral stalks are beginning to droop. False mermaid nutlets are swelling inside the tiny flowers. Toothwort petals have almost all dropped as the narrow siliques elongate, seeds hardening inside. Sepals on nodding trillium are curling back at the tips to expose the white flowers, which are nearly ready to open. Hairy sedge is furred with anthers and stigmas.

A shaft of sunlight canting between the trees that line St. Joseph Creek struck a white bear sedge in full flower, casting a silhouette of the coiled stigmas and inflating perigynia against the bract that forms a hood around the inflorescence, like a shadow puppet playing out the end of the second act of spring. Chimney swifts gurgled and darted around the first quarter moon, above the leafing-out canopy where young insects were on the wing, and where the blue-gray gnatcatchers buzzed and picked around for food. Gnats danced above the forest floor. Flickers squeaked and fussed. Red-bellied woodpeckers barked. Chickadees and white-throated sparrows were trading fours.

I inadvertently scared a black squirrel up into a red oak. He dashed out from under my shadow and disappeared up the bole of the tree before I could pace around the opposite side and see where he’d gone. I couldn’t see him, but he was up there somewhere, standing still, perhaps watching to see if I might be a big cat or a coyote. I looked for the squirrel for several minutes but didn’t find him again. It occurred to me that this was the last night of April, and I thought of what a strange, hard month it’s been for our world. I am sorry to say that since high school, I almost never think of the word “April” without T.S. Eliot’s lines chasing along behind:

April is the cruellest month, breeding
Lilacs out of the dead land, mixing
Memory and desire, stirring
dull roots with spring rain.

The forest floor was carpeted all around with tangles of lanky false mermaid as high as my ankles, swamp buttercup and false rue anemone still blooming in the woods, two-toned hummocks of James’s sedge on the cusp of putting up inflorescences. As I left the red oak and walked out of the woods, the squirrel’s memory of me likely disappeared more quickly than the memory of a buried acorn. I imagined, as I drove home, the black squirrel alone in the red oak he’d dashed up, separate from every other squirrel in the woods, moving out to the shoot tips to nibble and clip, glean what nutrition he could from the inner bark and end buds, or just feed the incessant desire to gnaw.

2 thoughts on “Mixing memory and desire”