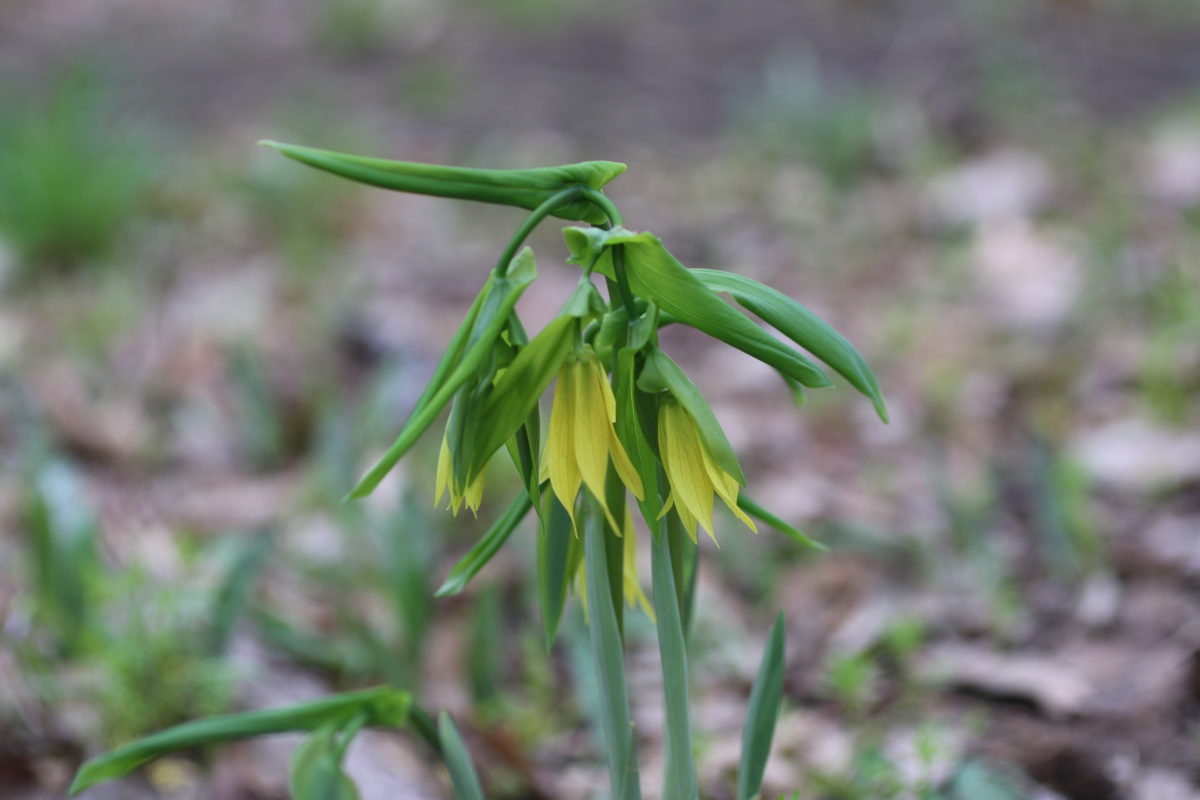 Brooklyn and I arrived at Maple Grove on Friday morning to find a workman spraying Roundup in the St Joseph Creek floodplain. I asked him if he was spraying for Ficaria. It is beautiful, but invasive: I’ve seen it taking over in the neighborhood where it has become established. Yes, he said, they fight against it all the time. It’s flooding in from all sides. We talked about Japanese stiltgrass and Japanese knotweed, which they also control. I’d have talked to him for much longer, but he had work to do. I was caught between cheering and mourning.

Large-flowered bellwort blooms appear to have shaken themselves out from their enclosing foliage sometime on Thursday. I first noticed the species on the 9th, and when I did, the anthers were peeking around the edges of the leaves. Undoubtedly the plants were up several days earlier, cryptic only in the sense that I hadn’t noticed them, or hadn’t been paying attention; very little is unidentifiable, but there is always a great deal that has not yet been recognized or noticed, often growing right beneath our noses. The flowers are excessively demure, borne at the tip of a plant bowing so deeply that its flowers never have a chance to open upright. The petals descend and twist, concealing everything, eyes cast downward, considering their options right until the dance is over, and then the flowers wither and you find they are ripening. The whole plant is a bit understated like this. If I have any excuse for not noting it here in the first week of April, this is it.

The bloody petals of prairie trillium have been popping into view. They are mostly still closed, but I noticed my first one in flower on Friday. But Rachel and a colleague of mine saw flowering prairie trilliums at Maple Grove earlier in the week. In full flower, the sepals are strongly reflexed, aimed downward like the petals on a prairie shooting star. I believe—perhaps “imagine” is more correct—that during the weeks in which the flower is developing, turgor builds within the closed sepals, which snap open when they cross a threshold. I have found plenty of flowers with petals peeking out between gaps in the sepals, a bend developing at the base of the calyx over the course of two and a half to three weeks, at the point where the sepals will be crimped at maturity. I have found nothing intermediate between this stage and fully open. This week might be a good time to mark one or two to follow. The nodding trillium flowers are still completely closed, so we might as well keep an eye on them as well.

The downy yellow violets came into flower this week. They are overlapping with the flowering wood violets. The few that I found seem very short, leading me to wonder whether (1) the trailside downy yellow violets that I have watched in past years, mostly on my walks through the East Woods, are on average taller and branchier than violets growing in the middle of the woods; or (2) downy yellow violets continue to put on millimeters after they flower. Both seem plausible to me, but as I look through my photos of this species, which are not many, I am betting on the second. Based on my photos from last year, I’m also betting on three weeks to fruiting and about a month after that till the capsules dehisce, opening like miniature peapods.

Sugar maple leaves, which opened to become reasonable just one week ago on the smallest samplings, are opening now on midstory trees of a few inches diameter and twenty or so feet tall. Black elderberry leaves are branching and becoming recognizable. Jewelweed leaves are surpassing the cotyledons. Poison ivy petioles are stretching out, and the leaflets are spreading. Solomon’s seal and false Solomon’s seal leaves are continuing to fill out and diverge. False mermaid, ever the star of the spring understory show, is up to six inches tall and branching, bright green, with leaflets in some places nearly as broad as a pencil eraser. The plants are as lush as I believe I have ever seen. It is blanketing the woods, thick as a down comforter but skeletal, a duvet in the making. What is it in this creepy spring that makes the false mermaid so happy? Perhaps the early warmth, ample rain. They’re getting what they need.

And Sprengel’s sedge, in one twenty-four hour day, went from producing closed spikes to fully flowering. Wood’s sedge and bristly buttercup are now flowering throughout the woods. The sporophyte capsules on woodsy thyme moss look fat enough to pop with a stick pin. This should be a perfect Sunday for a walk in the woods.