False mermaid flowers have opened, abruptly, and prairie trillium appears about to. Yellow-rumped warblers are back in town. Robins are building nests. 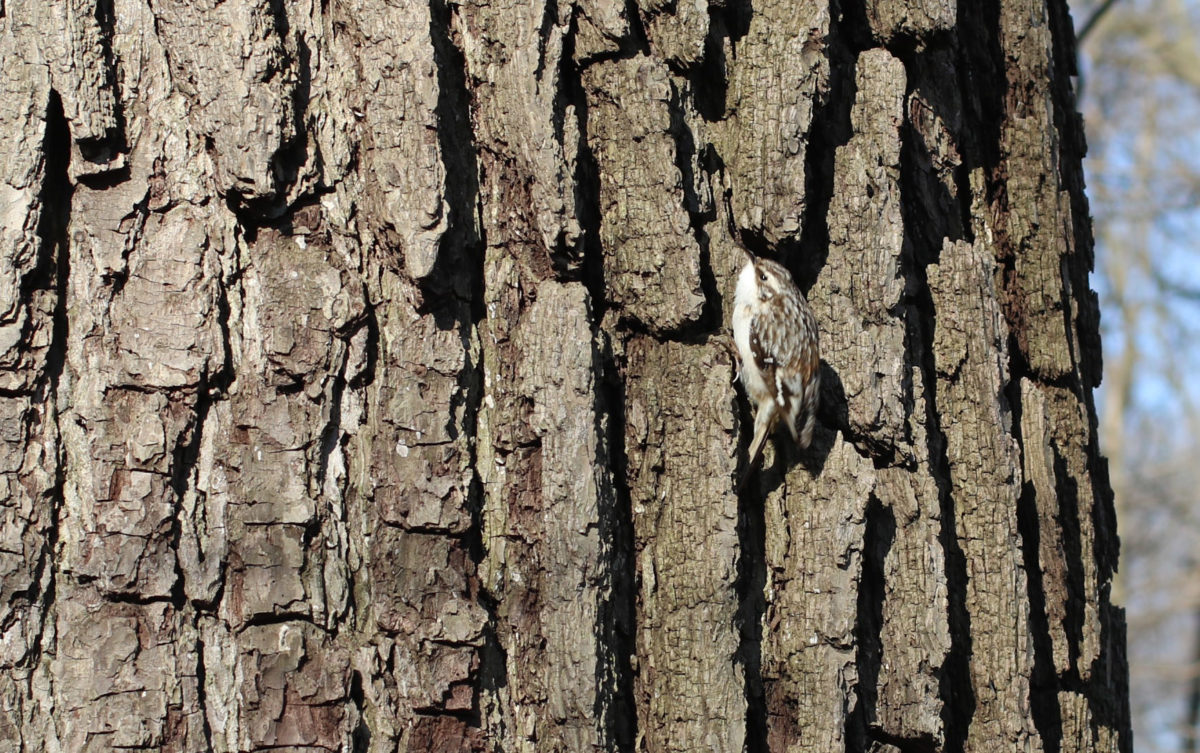 Saturday morning, the false rue anemone flowers were a cleaner white than the melting snow that covered about three quarters of the Maple Grove forest floor. Brooklyn and I had walked from our house to see if we could find false mermaid in bloom. But all the nodding flowers I could find were clamped shut, the seams between the sepals raised like a bead of glue. They were perfect in form. Young nature is often like this, drawn with a fine-tipped brush in a steady hand. Old nature, by contrast, is ragged around the edges, made of rotting sugar maples and shredded evergreen sedge leaves, red oak acorns cracked open by a squirrel and left in a bed of mosses on a decomposing stump. I don’t favor one over the other. I love the range. It creates a space for your spirit to navigate. It gives the forest a long axis of variation that you can’t see in a single visit.

A brown creeper ratcheting upward on the bole of a red oak allowed me to get close enough to photograph it, even with a macro lens, the worst kind of lens for getting a bird at any distance. Creepers are moderately tolerant of people, not in my experience at all inquisitive, as I think the chickadee is, nor wary, as I take the ovenbirds to be. They seem to be simply unconcerned with people. So while I don’t see creepers as often I suspect I ought, I have gotten quite close to them on street trees and in the forest. This one worked his way carefully up the bark, cocking his head or rotating his entire body to get at insects in the furrows and under sheaves of bark. Nearby was a yellow-rumped warbler on the base of a sugar maple tree, the first I’d seen for the year but not, I think, the first I’d heard. Robins were flipping leaves in the understory. Cardinals, white-breasted nuthatches, red-bellied woodpeckers were calling. Ruby-crowned kinglets were singing in the bottoms along the west edge of the preserve, where the wide trail bends to the east and Brooklyn and I often debate momentarily whether to hike upward along the north-facing slope or follow the broad trail out into the neighborhoods, toward home.

Yellow violets were branching but still vegetative, beside wood violets that have been flowering since at least late last week. Jewelweed cotyledons ranged to the size of quarters, and on some plants the new foliage leaves were as long as the cotyledons, which they will soon eclipse. Flowers were starting to form nubbins at the bases of the wild ginger, where the leaves diverge and the scales are still visible on the exposed rhizomes. In our yard, they are a bit further along, and a clean pore is opening at the tips of the nascent flowers. A clean white root arched from the soil like the coil of a sea serpent. I gouged it out with my index finger and found it was connected to a trout lily that had been buried in the soil. I replanted it and hoped for the best. Prairie trillium bud scales were just separating so that the flowers could be seen inside; will they be open a week from now? Spikes were emerging on hairy sedge, no anthers or stigmas showing yet, and Pennsylvania sedge was in full bloom. An army of lily of the valley was putting out inflorescences at the south edge of the woods, near the parking lot, foliage rolled like paper cones.

Sunday morning, the yellow-rumped warblers were singing within 20 feet of the church lot where Rachel and I parked the car, and they accompanied us on our walk through the woods. They called from the canopy while Brooklyn was getting duckweed on her snout. They moved around low enough in the understory trees that we could get a glimpse of them while we were talking or looking at a prairie trillium ensnared in a dead oak leaf, which it had heaved off the ground but could not seem to get its leaves loose of. There were chickadees singing and red-bellied woodpeckers barking. A spring peeper sang for 20 seconds and then was quiet. Ruby-crowned kinglets declaimed in the shrubs filling in around the sloughs and ephemeral watercourses throughout Maple Grove. And the nodding floral buds of false mermaid were suddenly opening on the hilltop where three weeks ago a pileated woodpecker lured me into believing I might be able to watch him all summer long, while a winter wren gleaned insects from a rotting log.

At home, I read an email from an old friend. He had called me the first week of our shelter-in-place order, out of the blue, while I was in the woods with Brooklyn. He’s one of the best readers I know, and we’ve been corresponding a bit about natural history writing over the past month. In this last email, he recommended I look up Tim Dee. I found an excerpt from Dee’s Four Fields on Amazon and find it very close to how I think about things, and very clear. The second paragraph of this excerpt begins, “Throughout my life much of my happiness has come from being outside.” You couldn’t say it more directly than that. Dee goes on in the next paragraph:

Indoors, looked at from the field, seemed at best to be talk about life instead of life itself. Rather than living under the sun it fizzed – if it fizzed at all – parasitically or secondarily, with batteries, on printed pages, and in flickering images. I realised this around 1968 in my seven-year-old way. At the same time, however, I learned that I needed the indoor world to make the outdoors be something more than simply everything I wasn’t. I saw it was true that indoor talk helped the outdoor world come alive and could of itself be living and lovely, too. Words about birds made birds live as more than words.
…
Without fields – no us. Without us – no fields. So it has come to seem to me.

Indoor talk helped the outdoor world come alive. The passage reminded me of John Burroughs’ point about observation in “A Sharp Lookout”:

… it is with the thoughts and half thoughts that the walker gathers in the woods and fields, as with the common weeds and coarser wild flowers which he plucks for a bouquet, — wild carrot, purple aster, moth mullein, sedge, grass, etc.: they look common and uninteresting enough there in the fields, but the moment he separates them from the tangled mass, and brings them indoors, and places them in a vase, say of some choice glass, amid artificial things, — behold, how beautiful!

We’re all stuck talking about the world, and we hold the world at arm’s length when we do it. But in so doing, in grinding the world through our minds, we imbue it with beauty. We stop participating in the world, but when we do, we can see that the world is itself a participant in beauty. The joy of beauty is a joy that is uniquely ours as humans. Words about birds make birds live as more than words.

This past week, robins have been building a nest on top of an air conditioning unit built into the wall of our back room, one that hasn’t worked for at least 6 years but that at least for now we’re glad we didn’t remove, for the sake of having robins to watch. We have dismantled our old rotting compost heaps and distributed the compost among the garden beds, giving the garlic and onions something to smile about. This week we’ll pitch the rest into the driveway and sort it into the burnable, the pilable, the spread-over-the-soilable, and the scraps of plastic bag and lost-and-decomposing workgloves that we’ll relegate to the landfill.

As I write this, the sun has just gone down. Robins are singing in the neighborhood. Tomorrow it’s work and school again, with articles to revise and lectures to prepare, students and teachers and classmates to meet with, and all done at arm’s length, over the phone and internet. We are among the very fortunate. We can afford to hold the world at arm’s length for the time being. But if we don’t see the world differently and more clearly at the end of this time, we’ll have missed an opportunity. We’ll have only expended words.