In the week following Easter, sugar maples have bloomed, snow has come and gone twice, and the first false mermaid flowers have appeared. 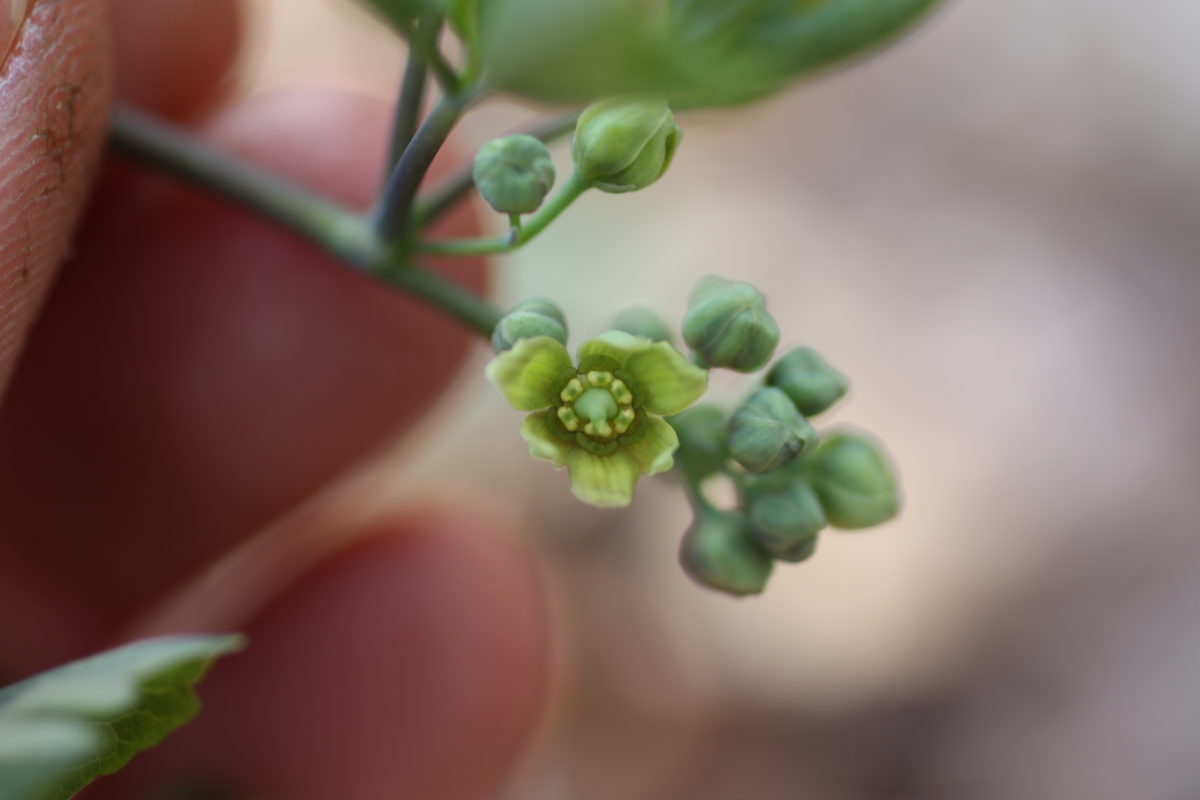 It’s been a cold week since Easter. Tuesday morning was around 30 degrees and sunny when Brooklyn and I got to Maple Grove, and the chickadees were singing. Robins were flipping the autumn’s fallen leaves, and sugar maple flowers littered the trails. The three maples I see the most often have bloomed in succession: silver maple on March 10; boxelder on April 12; sugar maple a couple of days later. What is it that gives silver maple such a lead? Perhaps there is nothing adaptive about it. Or maybe as a floodplain tree it likes to get a jump on the season. Sugar maple leaves had just unfolded for the spring on some of the saplings that are lowest to the ground. By the time you read this, they will be opening on saplings throughout the woods.

White trout lily was blooming everywhere. Wood anemone flowers were not yet fully open for the day, but they are at or close to their spring peak, huddling beneath the trees in clusters of three to a dozen. False rue anemone were in full flower, dark rafts strewn with white, floating out across the forest floor. Dutchman’s breeches had just come into bloom, the nascent flowers that had emerged as condensed white teardrops, mung-bean sized spores on the scape three weeks earlier swelling to their full size in the days following Easter, but only on some plants; the rest have perhaps already caught up as I write this. Toothwort were in full bloom. Petals had been knocked off many of the bloodroot, which stood denuded, leaves and capsules swelling. A single flower was open on one plant of blue cohosh, and every stem in the forest was arching like the maître d’ in The Triplets of Belleville, arms flowing, leaves flopping as they start to expand.

In my years of sedge-watching, this is the first spring that I’ve noticed how abruptly straight-styled wood sedge bristles up in the spring. A week or so ago I noticed it, and again Tuesday, how as the tillers emerge from each clump, the plants become suddenly echinate, prickly with sharp-tipped leaves that without warning emerge through the tussock of the previous year’s foliage. New shoots of white bear sedge had surpassed the previous year’s evergreen leaves humped around the plant like discarded socks. Hairy sedge was ankle high and straightening up. Wood’s sedge was, for the first time this year, bristling with stigmas.

The first leaves were just beginning to grow on poison ivy. Ohio buckeye was leafing out. Jewelweed leaves were approaching the cotyledons in length, beginning to assert themselves beyond the margins of the seed leaves. Stinging nettle was about four inches tall. Flower buds were green and swelling on Missouri gooseberry. False mermaid was also in floral bud, and I was struck once again at how much yellow there already is at the bases of the plants. They seem to be pouring resources toward two ends: elongating and flowering. In the coming week or so they’ll become a little branchy and spindly as they stretch upward in search of sun. Then the flowers will open, and the month-long process of filling in the nutlets will begin. I love this little plant.

Wednesday we awoke to snow, but Thursday morning was lovely again, if a little cold. There were frost and needle ice in the soil when Brooklyn and I arrived at 7:30. Most everything looked fine, but some of the Virginia bluebells and wild leeks had wilted in the freeze, and even a few prairie trillium. One patch of wild leek in particular looked as though it had been crushed by an elephant. What appeared to be a veery was flipping fallen leaves alongside the robins, and I followed it for awhile. But Brooklyn was antsy, and we didn’t last long. A ruby-crowned kinglet sang from down by the culvert where the Wood’s sedge grows. An enormous woodpecker drummed, and I wondered whether it might be a pileated woodpecker, but I did not see it and only heard it once.

The leaves had started to spread on the three tallest monocots of Maple Grove’s spring forest understory: Solomon’s seal, false Solomon’s seal, and large-flowered bellwort. You can tell them apart pretty easily now. Solomon’s seal is the slenderest of the three, slightly glaucous, red-stemmed beneath the leaves, becoming green as the leaves mature and begin to curl outward. False Solomon’s seal has stouter leaves that are more divergent, with deeply impressed veins and ciliate margins (use a hand lens to see the hairs along the leaf edges). And large-flowered bellwort has begun to nod, and flowers are poking out from around the edges of the leaves. Before it begins to nod, the leaves of this species are also keeled, unlike the other two.

Carex woodii was particularly prominent as Brooklyn and I walked out, anthers just poking out from behind the staminate scales, shoots glaucous, tall and slender. We passed a man walking his dog. He waved, we chatted in passing, we comfortably kept our distance. Everyone seems to be growing accustomed to social distancing. These ways of interacting grow more familiar by the day. It may be hard to get used to being close to one another again after a year and a half of this, until the world is vaccinated.

At home, reading a section of Martin Buber’s I and Thou, which I am going through much more slowly now than I did in my early 20s, I came across this:

Knowledge: as he beholds what confronts him, its being is disclosed to the knower. What he beheld as present he will have to comprehend as an object, compare with objects, assign a place in an order of objects, and describe and analyze objectively; only as an It can it be absorbed into the store of knowledge. But in the act of beholding it was no thing among things, no event among events; it was present exclusively.
…
Not that scientific and aesthetic understanding is not necessary—but it should do its work faithfully and immerse itself and disappear in that truth of the relation which surpasses understanding and embraces what is understandable.

Which I take to mean: there is knowing for knowing, making for making, doing for doing. Ultimately, though, it is all making and knowing and doing so that we can become human.

Friday night, Rachel and I took a short walk through Maple Grove with Brooklyn. It had snowed again, but there was a solitary false mermaid in bloom. It may not be the very first of the year, but it’s the first I’ve seen. It stands in for spring, one of the first plants I look for in February, one of the later flowers I find each year in April. It gets its place in the order of objects, and still it greets me each year.

One thought on “Embracing what is understandable”