In the warm first few days of the week, blue cohosh and mayapple branched, and the sugar maple and ironwood buds broke open. 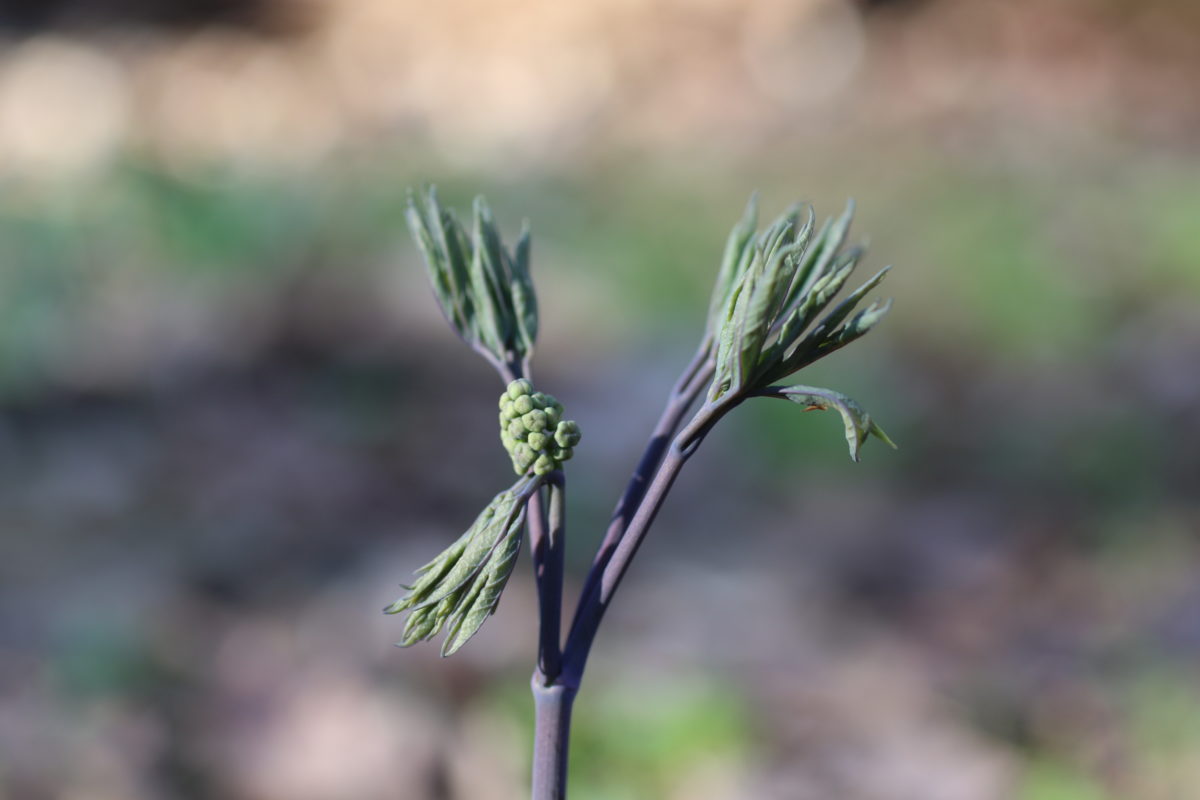 The first half of this week was warm, shorts weather, temperatures rising to the mid-70s with thunderstorms and sun. The woods responded. The forest floor in Maple Grove Thursday morning was green with trout lily still guarding their flowers, which I had wrongly predicted would all be open by now; wild ginger leaves a third or half open, grading from silver-dollar-sized to as large as the smaller burdock leaves, which will surpass them by severalfold over the next few weeks; understated colonies of wood anemone; dark green islands of false rue anemone displaying a third of the flowers that they’ll show in a week, when white blooms will be strewn across the tops of every colony; and false mermaid, which have grown to the middle of my shins with floral buds still wrapped up tight, waiting for another two inches of height to open, leaves yellowing at the bases of some of the plants, which perhaps are already moving resources out to their tips. What other plant more fixedly insists spring?

The leeks are a close second. They have reached middle age and are starting to look ragged, some leaves curled at the tips, others frayed by a dragging deer hoof. They have been growing as aggressively as any understory species in the woods the past few weeks, jogging along even as temperatures dropped and other species slowed their pace, and it may be that the price they pay for such rapid growth is susceptibility to damage. They are at their foliar peak now, sopping up as much sunlight as they can, packing it away before the leaves come out on the trees. And the tree leaves have started to move. Terminal buds have broken open to reveal the tips of sugar maple leaf blades on saplings sticking up like switches snipped and planted butt-first, the calf-high to knee-high ones that are inconspicuous in fall but pop into relief when the first snow gathers around their ankles. Buds have broken on ironwood, which dropped its senescent leaves sometime in the past week or so. Musclewood buds have only started to swell. A boxelder sapling this morning bore a miniature compound leaf. Chokecherry leaves are longer than my thumbnail. The long, compound leaves of black elderberry in the floodplain of St. Joseph Creek are a few inches long and folded like paper cutouts in a greeting card, slowly revealing themselves as we open onto mid-April.

Blue cohosh branches have started to spread, giving the balled-up inflorescences room to grow. The plants still have to put on weight, but they will have to continue branching as they attain their final height. Solomon’s seal spears are rising veined and bluish from their sheaths, angling as they emerge, rolled primly in their pinstriped leaves. Large-flowered bellwort is opening more casually. The leaves are looser and more vulnerable, a brighter green, not girded in waxy bloom against the sun. The tips of the anthers are visible beyond the leaf margins. Mayapples are opening, branches spreading on the larger individuals, floral buds veined and nestled between the apices of the folded leaves. The first flowers of Virginia bluebell have opened. One of the white-flowered trilliums is in floral bud. Dutchman’s breeches have bloomed.

In wood chips nestled in a groove atop a long, broad, decomposing trunk that has fallen adjacent to the northernmost trail in the woods, a sugar maple seed has germinated. Its root trails out for a few inches and bristles with root hairs, hanging onto the dust of decomposing wood when I pull it out to look. Its cotyledons are still crimped from their time in the seed, like a butterfly’s wings damaged after emergence from the chrysalis and before they could fully dry. Young shoots of Wood’s sedge are about six inches long and arise erect from long-spreading rhizomes, forming loose colonies. Hairy sedge shoots are about the same length but inclined away from the center of the plant, and cespitose, clump-forming instead of colonial. The first jewelweed foliage leaves are growing beneath the coin-shaped cotyledons.

Brooklyn and I nearly tripped over a winter wren who was feeding, I believe, at the margin of the water tumbling out of the culvert north of Avery Coonley. It chipped and hopped out of view as I watched it, little and brown like a vole with wings. I could hear it after I could no longer see it. By the bridge over St. Joseph Creek, as we walked back to our car, another winter wren sang for three seconds, then paused, then sang again.

Last night before bed, I reread Nan Shepherd’s chapter on the animals of the Cairngorms and was struck by this passage:

Imagination is haunted by the swiftness of the creatures that live on the mountain—eagle and peregrine falcon, red deer and mountain hare. The reason for their swiftness is severely practical… But their grace is not necessity. Or if it is—if the swoop, the parabola, the arrow-flight of hooves and wings achieve their beauty by strict adherence to the needs of function—so much the more is the mountain’s integrity vindicated. Beauty is not adventitious but essential.

Beauty is not adventitious but essential. And perhaps the reciprocal is true as well: one of our human functions is to learn to see the beautiful, to be “haunted by the swiftness of the creatures that live on the mountain.”

I fall asleep many nights thinking of the woods. And when the writing becomes stale and I grow unfocused in the middle of the day, my mind drifts out along the trails that loop through the maples and beside the pond in the middle of the woods. Sometimes there is a great horned owl there. Sometimes there is a winter wren. Sometimes the pond is full of American toads and the woods are flooded with false mermaid, tall and branching, coming into flower. Maybe being haunted by creatures has a human function.

4 thoughts on “A beauty that is not adventitious but essential”