Over the past two days, the mayapples and wild ginger have emerged, duckweed has spread across the pond, toothwort has started to flower. 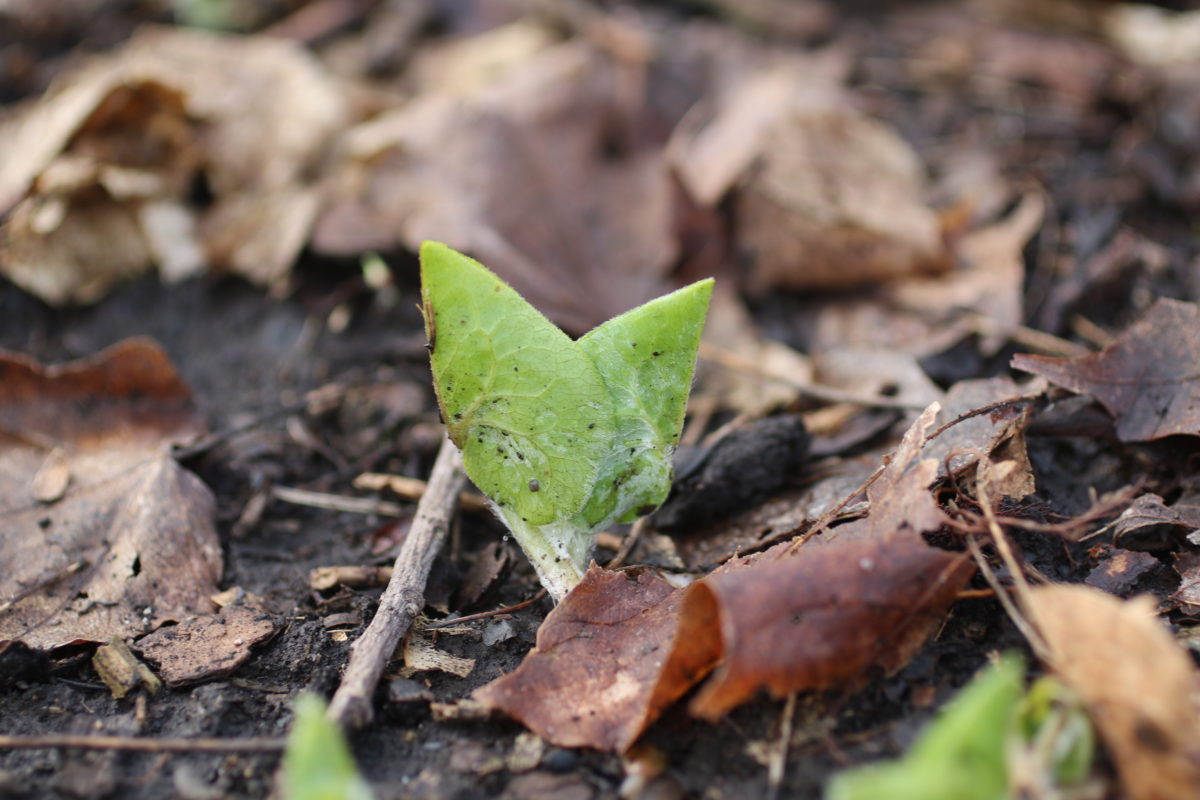 It rained Sunday night, and Maple Grove was soggy when Brooklyn and I arrived this morning. Spring peepers were singing from the pond at the bottom of the hill north of The Avery Coonley School. This morning was the first I’ve heard them going strong this year: I’ve heard isolated individuals a few times, but their trills and chirps this morning were my first chorus of individuals for the spring. Chorus frogs were singing as well, though nowhere near as loud. Flickers were squeaking from the tops of the dead ashes, red-bellied woodpeckers were drumming, cardinals and robins and chickadees were singing. The sun was playing in the canopy, and I heard a warbler of some kind far up, too far for me to see what it might be, and it was one of the warblers whose calls I do not remember. Perhaps it was a yellow-rump. The wood ducks whistled.

The pond has turned abruptly green with duckweed over the past few days. When duckweed first starts growing, before its resource is saturated, it grows exponentially. The pond is not fully covered, but perhaps the growth has started to slow all the same. White trout lilies are forming lawns of hundreds of individuals. Flower stalks are free of the leaves on some of them, but the flowers were not open this morning. They were however far enough along that I’d expect them to have opened during the day. Archipelagos of flowering bloodroot are spread out across the forest floor. The closed flowers of Virginia bluebells are mostly exerted from the foliage, staring at the ground, considering their next move in the sprint of a woodland wildflower’s spring.

The shrubs, mostly honeysuckles, are leafing out like a mist sprawling between the trees, dying the air green, reflecting the puddles of false mermaid. Great waterleaf rosettes have become crisply variegated, the core of each blade white, the margins a light, hairy green, roughly the color of the cotyledons that have been out on the seedlings for a few weeks. Wild ginger gives the appearance of slicing up through the soil, the paired leaves folded over one another and just beginning to open in places, leaning backwards to catch the sun.

I found a single flower open on one toothwort this morning, but many are on the cusp of blooming. By the time you read this, I expect that you’ll be able to find plenty of toothwort in flower. Leaves of wild geranium and swamp buttercup and wood anemone are fully formed. Inflorescence scales on Pennsylvania sedge are dark and ready to open, a few days behind the plants growing beneath Downers Grove street trees. In our yard, ebony sedge is already flying its anthers. Carex radiata is bristling with new shoots like a cushion plant. The spears of blue cohosh tipped with fine, folded leaves look like feather dusters stuck handle-first into the soil.

The mayapples have all emerged from their buds and are massing in armies of 200 or more, leaves still folded umbrella-like. The bud scales are pulled up high around their ankles. I don’t see any still in claw form, but some are undoubtedly concealed alongside tree trunks or beneath the duff.

I have been reading this week about the Eocene forests of North America, transitioning from the tropical forests of roughly 56 million years ago to the temperate, nearly-modern forests into which the oaks we know moved and diversified.1 These accounts of ancient forests read to me like movie scripts, in which the forests flow southward like the water of the everglades, slowly to the sea, where the tropics are squeezed down into Mexico or out of existence up against the gulf, and the boisterous new deciduous forest trees come in and clamor for a little ground to grow in. Everything takes so long. But all those long times are, remarkably, composed of springs just like this one. Go back through 50 or 60 million of them, and you reach the birth of oaks. Go back through 130 or 150 million springs, and you reach the birth of flowers.

As I write this, we’ve just had another thunderstorm, and the moon came out from behind the clouds for a few minutes. It’s a super-moon, closer to the earth than usual and therefore especially bright. Temperatures will be dropping over the next few days, drawing spring out a little. I hope you and your families are able to get out and enjoy it this week.

2 thoughts on “A few warm, rainy days in the woods”