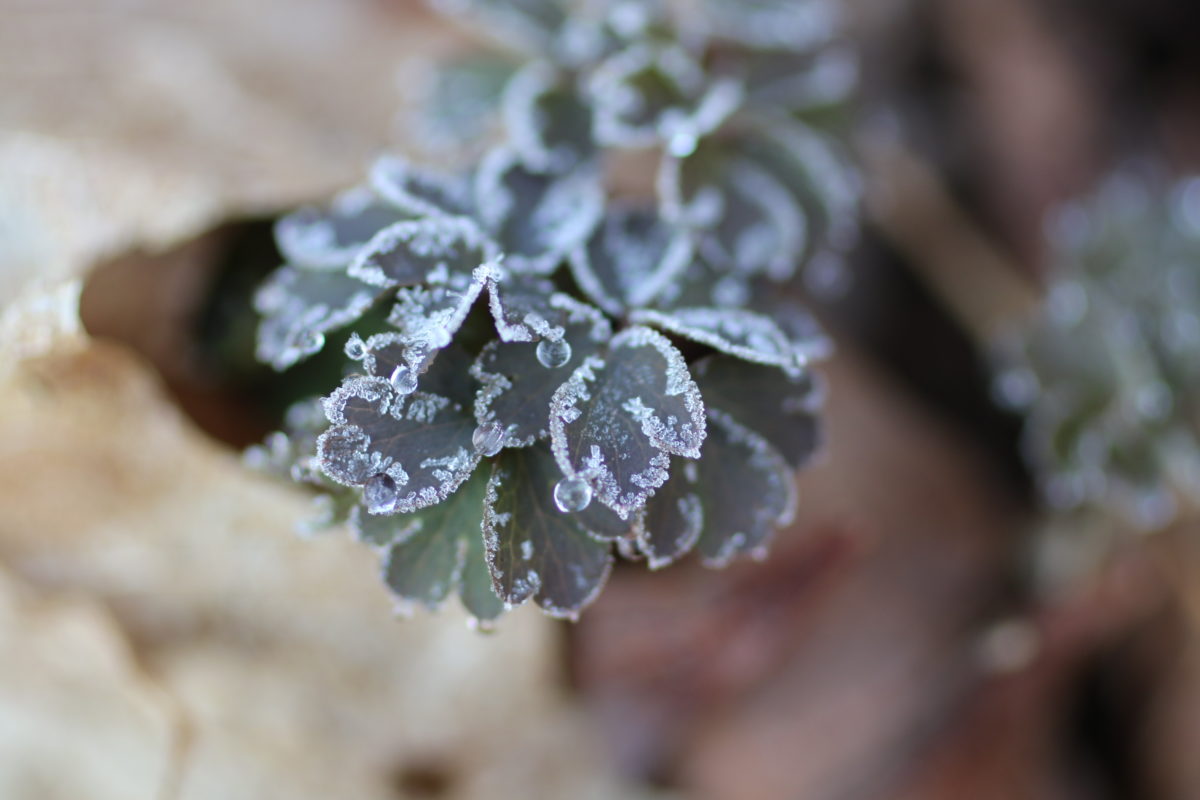 Cornelian cherry has been flowering all week in the yards backing up onto Turvey Road, which leads to the entrance to Maple Grove, and Thursday morning I noticed that annual bluegrass and common chickweed have started blooming along the gravelly roadside.

On our walk into Maple Grove this morning, Brooklyn and I were flanked by drumming red bellied woodpeckers. A downy woodpecker looped across the trail and perched on a slender maple. A phoebe was calling, and a wood duck protested from the pond at the entrance. We had awoken to frost on the lawn, and it carried into the woods. There was frost on the logs and frost lodged between the leaves of the wavy starburst moss, which still bears the desiccating stalks of sporophytes that were ripe and spilling clouds of spores four weeks ago or so. Frost rimed the margins of the false rue anemone, dotted all around with guttation droplets that were full and plump when we arrived at a bit after 7, and that slowly evaporated as the sun hit them through the trees. I watched as they shrank, and Brooklyn waited patiently for me until they were almost gone, and as I shot photo after photo trying to get this moment locked away for later.

The wild ginger leaves I have been watching for have squeezed out of the rhizome tips under the leaf litter and are no larger than my fingernail, folded into a slim soft promise that spring is really coming. Their rhizomes snake beneath the soil and surface so that you can scratch them and smell where you’ve broken the skin. The wild garlic leaves are as long now as my hand from the wrist to the tip of my middle finger. A wood anemone has put up its first leaves, but they are curled and unhappy, as though they regretted stepping forward so early. The bloodroot flowers are stretching upward on plants that have had a lot of sun and the right kind of protection, but they are not opened yet. Many of them are still wrapped up in their leaves.

Wood violet leaves are open; in neighborhood lawns they are flowering. Leaves are expanding on the short honeysuckles in the woods; in people’s yards, many are barely opening. Chokecherry leaves are reaching out from their buds. The woodsy thyme-moss capsules are bright green and just dying to burst open. Poodle moss appears to be putting on branches and thickening up on the bases of the white oaks, taking advantage of these cool moist days of spring before the heat of summer favors those that have roots and can draw moisture from the soil.

Around the pond, hop sedges are greening up while their perigynia lie on logs and in the mud, papery and brown, dropped last year and waiting to form beds of more hop sedge. Blunt broom sedge is forming fresh new shoots on decomposing logs. Duckweed is covering the surface of the water.

Brooklyn and I hiked out the same way we came in, serenaded by a phoebe and a wood duck.

That night, my son and I biked west from Downers Grove. We passed the train station, and the 7:01 Metra stopped; there was no one aboard to get off that we could see. We passed the red-bellied woodpeckers calling in Maple Grove, passed Belmont, passed under 355, and scooted north through Lisle to Warrenville Road. On the way home, we biked up the hill toward the bridge over I-355. There were red-winged blackbirds calling, and I thought I could just make out the humming chorus frogs over the roar of the interstate. Just as we passed over the edge of 355, a song sparrow’s bouncing song started up and carried us over several lanes of traffic. They’ve surely been in town for weeks: I generally hear them in early March and have recorded them as early as late February. But I always notice them on my bike ride in through the fields carved into the East Woods. I somehow missed them this year, and it’s good to know they’re around.

As I crawled into bed that night, I read these lines from “Frost and Snow,” the fifth chapter of The Living Mountain by Nan Shepherd:

The freezing of running water is another mystery. The strong white stuff, whose power I have felt in swollen streams, which I have watched pour over ledges in endless ease, is itself held and punished. But the struggle between frost and the force in running water is not quickly over. The battle fluctuates, and at the point of fluctuation between the motion in water and the immobility of frost, strange and beautiful forms are evolved.

Motion is frozen, at this moment in this spring, on the margins of the expanding leaves. We are all together now in this point of fluctuation.

6 thoughts on “Between motion and immobility”