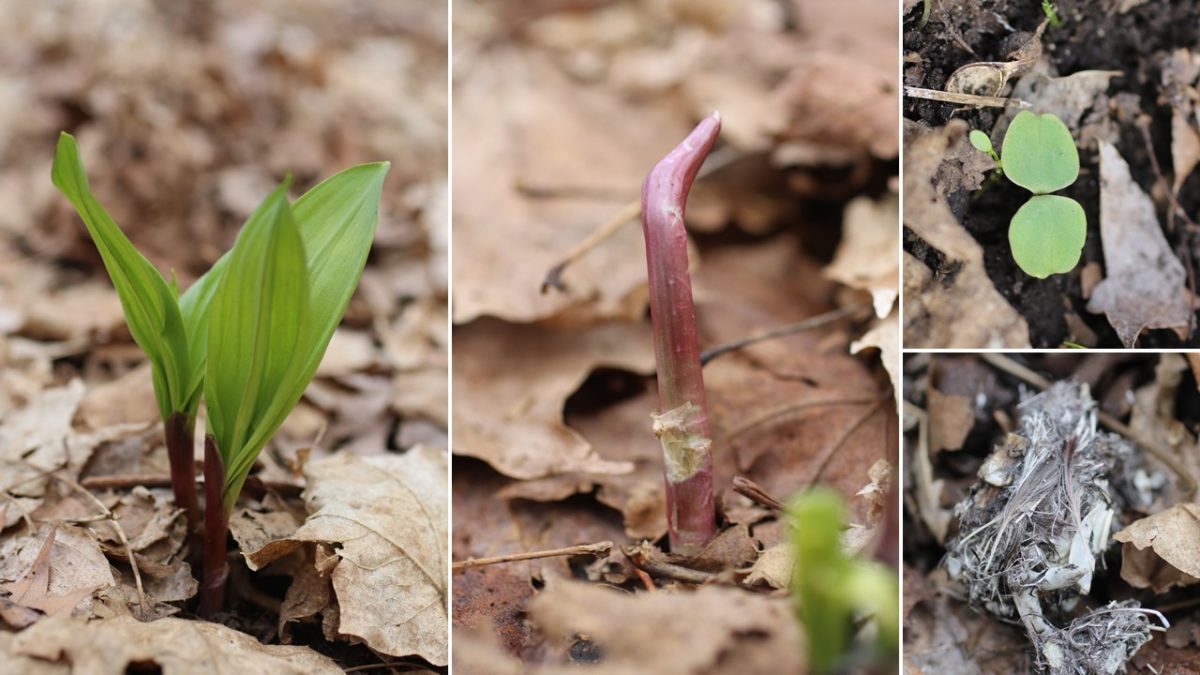 We had all been working in the morning, but after lunch it was beautiful, and we took a break outside. Rachel planted the radishes and chard, Louis and I played badminton, Brooklyn lay in the sun. Without warning, a mourning cloak butterfly flew up over the fence from our neighbor’s backyard and into ours, over our garage, and was gone. Recalling it reminds me of the allegory of the sparrow from Bede’s Ecclesiastical History of England:

The present life of man upon earth, O king, seems to me, in comparison with that time which is unknown to us, like to the swift flight of a sparrow through the house wherein you sit at supper in winter, with your ealdormen and thegns, while the fire blazes in the midst, and the hall is warmed, but the wintry storms of rain or snow are raging abroad. The sparrow, flying in at one door and immediately out at another, whilst he is within, is safe from the wintry tempest; but after a short space of fair weather, he immediately vanishes out of your sight, passing from winter into winter again. So this life of man appears for a little while, but of what is to follow or what went before we know nothing at all. [1]

We went back to our work for a few more hours, and around 4:00 Brooklyn and I drove to Maple Grove. The parking lot where we usually leave the car was full. For a moment, I had a strong desire for someone in power to step in and take charge, to tell us all to get back to our homes. It could be done with police officers or drones. But the feeling passed as Brooklyn and I walked the trail in, and we and everyone else gave others a wide berth as we passed, and we were all spread out outside instead of packed into offices or shopping malls or schools, sneezing on each other [2].

The red-bellied woodpeckers were calling. Scilla flowers have started coming up in the woods, though they are not opened yet. Beside them, false mermaid leaf blades have kept expanding and stalks holding up those very first leaves have, contrary to my expectations of three weeks ago, continued to grow. I had thought that that first leaf would give way to the branches arising beneath it, and perhaps it still will as the plant grows taller. But for now, that first leaf appears still to be reaching up toward the sun. It seems intent on surfacing above the oak litter and starting the spring carpet.

Jewelweed cotyledons have come out. Three days ago, in this very location, I came across a seedling that I did not recognize. As I look now at the jewelweed seed leaves expanded to about 2/3 the width of my pinky nail, I suspect that those fat-stemmed seedlings were the same species. I’ll see if anything else grows up in this area over the coming weeks and let you know if I notice I’ve made an error.

On south-facing slopes and in soil warmed by heat radiating from logs turned to face the sun, the wild leek leaves are nearly fully grown. Leeks throughout the woods have made huge strides in the past few days. Even on the flats, you find grasslike lawns of wild leek leaves curled like paper funnels, diverging at the tips. Every colony has a few at either end of the spectrum: growing along the trail at the north end of the woods, you can find a fully expanded leaf right next to a shoot still covered completely, with the sheath pulled over it all the way to the ground like a sheer stocking.

Beside these two plants, I found an owl pellet, presumably from the great horned owl that has been calling from the backyards at the north end of the woods for the past couple of months. I’m used to finding owl pellets composed of rodent fur, skulls and jaw bones, ribs and tiny femurs. Instead, this one was made of bird feathers and bird bones. Is that a typical meal for this owl? I don’t know.

[Note: 3/27/2020, Jay Sturner pointed out that this might well be a Cooper’s hawk pellet, which would explain the bird feathers and bones. See his comment at the end of this post. Thank you, Jay!]

We hiked the short circle around the hill and wetland on the north half of the preserve, then up the south-facing slope of the hill. Near the top, a small dark wren was picking at a rotten log. It moved among the mosses and scraps of soft wood from one end of the log to the other, then flew across the hilltop to another decomposing log. As it did so, either the robins moved in or I became aware of them. They were back at their leaf-flipping [3], but this time I had a closer view of one. He flipped a leaf, stood and watched around him for a moment, flipped another, then reached in with his bill and started pecking around, I would presume gathering insects that had been dislodged by the movement of the leaf.

A mosquito buzzed in my ear, the first of the season. Poodle moss spread over the root of a sugar maple tree was bright green. In the floodplain of St. Joseph Creek, foliage of dame’s rocket and Virginia waterleaf are beginning to grow, along with some parsley family member that may turn out to be angelica. Brooklyn and I headed home for supper.

6 thoughts on “Passing from winter into winter again”