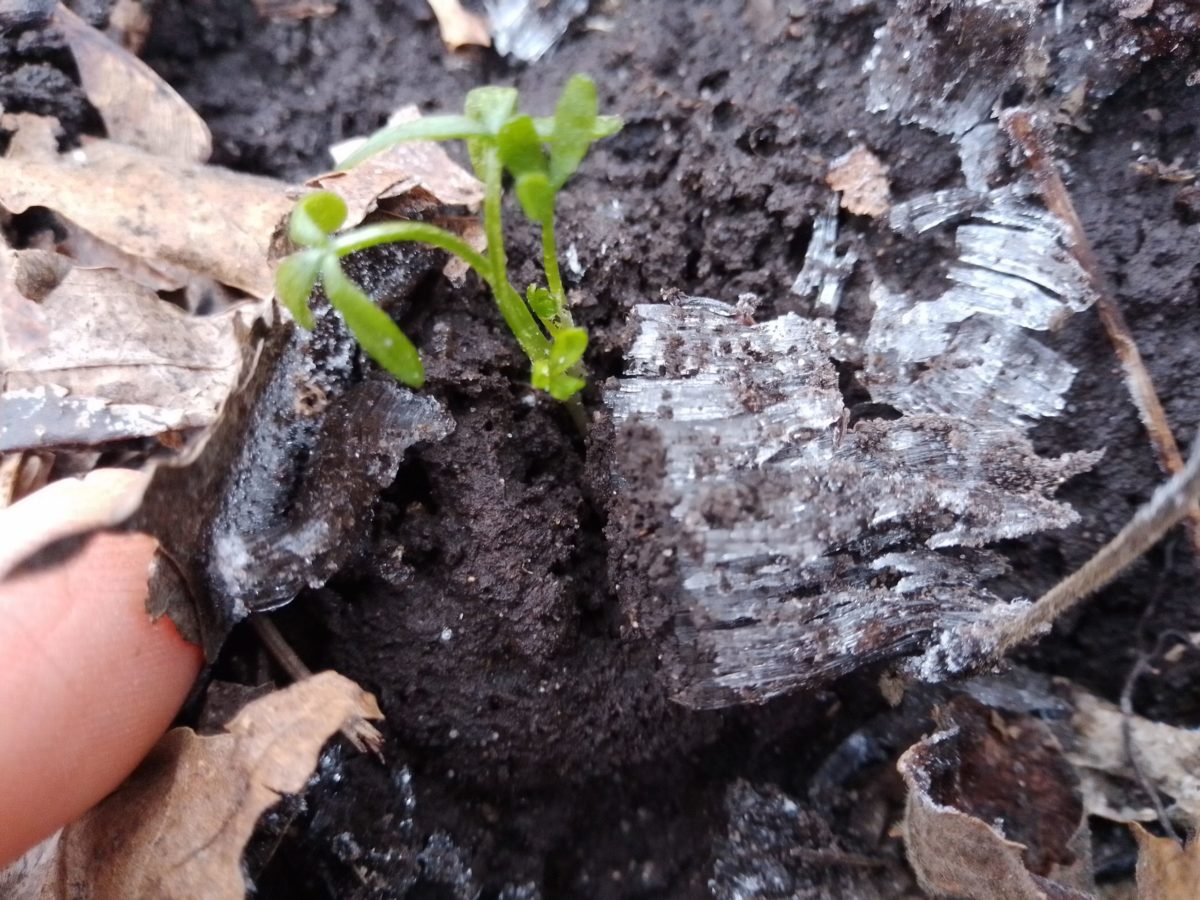 Rachel and I walked the dog to Maple Grove Forest Preserve this morning and found needle ice about an inch long in the wetter areas of the preserve. It’s one of those cold periods when the wildflowers hold for a moment before they sprint into action. The first false mermaid seedlings started growing beneath the duff piled up against the bases of the oaks and maples perhaps 3 weeks ago, tiny three-parted leaves with fingers folded in on each other, necks bent, roots inconceivably short even for such a small plant. I first noticed them March 4, and now they are visible throughout the woods. Toothwort started growing beneath the leaves at the same time, purple and arched as it pulled its head out of the soil; but unlike the false mermaid, I don’t see any evidence of it above the leaves yet. Spring beauty also started growing the first week of March. In the past two weeks I’ve noticed green straplike leaves creeping out and around the litter. The wild leeks that were crowns of spears three weeks ago erupted from their sheaths a week or so ago and have surfaced. Wild garlic has bored holes in the litter. Virginia bluebells have gone from clusters of leaf nubbins two weeks ago to bouquets with petioles. For now, everything is waiting.

Walking through the woods now, you know that the ice and the false mermaid aren’t experiencing what we are. Every human is at risk, senators and artists and botanists and even Queen Elizabeth, who has moved to Windsor Castle. The world is different than it was three months ago. I think of these lines from T.S. Eliot’s “East Coker:”

… As we grow older
The world becomes stranger, the pattern more complicated
Of dead and living. Not the intense moment
Isolated, with no before and after,
But a lifetime burning in every moment

I revisit Maple Grove year after year, and every year the familiarity is connected to the sense that there is something new to learn, that the same events are clothed in different garb. Yet I cannot help feeling that what the world is experiencing this year sets people further apart from the woodland than usual. It is perhaps the familiarity that makes the strangeness so palpable.

To know fully even one field or one land is a lifetime’s experience. In the world of poetic experience it is depth that counts, not width. A gap in a hedge, a smooth rock surfacing a narrow lane, a view of a woody meadow, the stream at the junctions of four small fields–these are as much as a man can fully experience.1

Tonight we began the first of at least two and a half weeks of a mandatory stay-at-home order. It’s consequently a little fuzzy to me at this particular moment what all this writing is for, this business of describing the world. But I can’t avoid thinking that “why” is not a particularly helpful question: knowing the world we live in is just part of being human, and so we have to do it well. As we take greater care of one another and pay closer attention to what the world around us needs, we still have this little part of the woods to get to know better.

There is comfort in continuing to visit these places close to home that I know well, where I know individual plants and when to expect them up. A week ago, duckweed started spreading across the pond. Spears of white bear sedge and hairy sedge and Davis’s sedge were all visible among the evergreen rosettes. Silver maples were blooming. Tomorrow it’s supposed to snow. This would be fine with me. We need a late-season snow to round out the spring.

4 thoughts on “This stranger world”