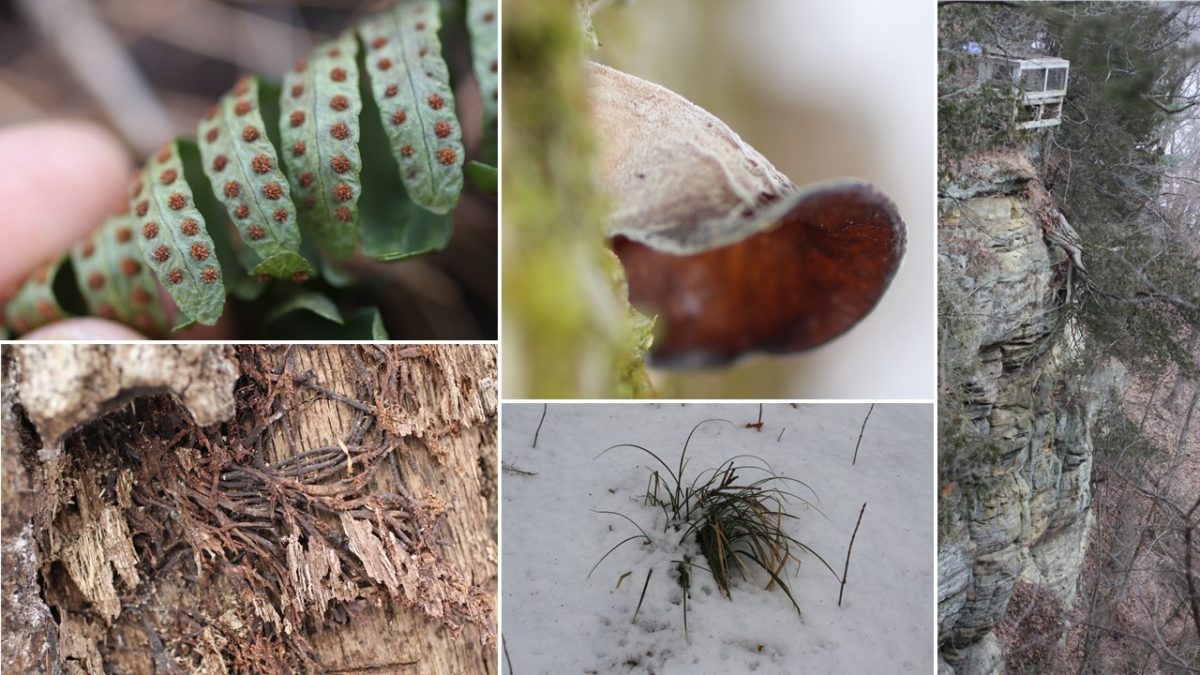 Friday morning a week ago, right in the middle of January, I woke early at Starved Rock State Park. I was housed with a group of my colleagues in the lodge, which is perched at the edge of the long trail paralleling the Illinois River. The trails there mostly overlook the river, with occasional loops down to connect the bluff-top trails with the shoreline trails. They are intersected by sandstone canyons that open into the river, with waterfalls spilling over one ledge after the next. I have been here many times with my family when the boys were younger, and we have hiked these trails in both directions from the lodge numerous times. I had not been here in years.

I headed toward St. Louis Canyon. The first half hour of my walk preceded the dawn, but the trails were as broad and hard as sidewalks, impressed into the soil and easily felt beneath one’s boots. It would be difficult to accidentally veer from the path, which is handy, especially in the dark: four feet off the trail in some places would make for a potentially lethal tumble onto the road or trails below. The ice crusted over the creeks babbling along the sandstone was the color of moonlight. The moon itself was murky behind the clouds, fading into and out of view. I stood on each bridge I crossed and watched the water gurgling beneath the ice, which piled up around the edges of the watercourses and framed the edges of the sandstone ledges where they gave way to the canyon below, where the ravines open up into a rich forest until it tumbled into the broad, slow river.

There was no snow. In the veiled moonlight the leaf litter of white and red and black oaks was quilted together with fallen branches and hop hornbeam leaves to frame the trail. The night before, my colleague Jake had pointed out a black oak that was cracked open below. He guided our attention upward. There, the narrow crown was rotated to lean against the adjacent trunk. The tree trunk had failed, perhaps in a storm, presumably in part because it was hollowed out with rot. At knee level, the bark was twisted and buckled on the outer face, straight on the inside where it was tacked at the base by the bole leaning away from the trail toward the north. I passed this tree now as I walked. All along the ridgetop this dry-mesic oak forest stretched, rimmed by junipers near the edge and white pines on the shoulder of the bluff. No birds were singing, and only the occasional car passed on the road below.

I reached the switchback just before the road at the west end of the trail. It was still dark, but the sky to the east was becoming a lighter shade of gray. The sound of cars rolling by on Highway 178 faded in and then subsided as I followed the creek weaving out of St. Louis Canyon alongside and under the trail. The walls of the canyon rose around me. The small river crashing nearly 80 feet1 from the creekbed at the top of the fall to the rocks below muffled the nearby road. I stood and watched it, and even in the dark I could see the water flashing as it fell. I laid down in the gravel and listened for perhaps 20 minutes. There was nothing to hear but water.

I walked up and out. By the time I reached the ridgetop, it was light. The 15 minutes before sunrise go remarkably quickly, relaxing into dawn over the course of just a few minutes. I came across several trees that appeared to have been gnawed to pieces. One had rained wood chips, forming a halo on the forest floor at its base that glowed like a sun rising through the oak leaves. Another had been chewed nearly to the ground. I don’t believe this is porcupine activity, though perhaps, nor beaver (we were too high up, and I saw no true beaver trees). It is a mystery whose answer will likely be obvious one day when I least expect it to. We ate as a group, then hiked around Wildcat Falls, where there were Pennsylvania sedge and black oak with mossy rugs between, a krummholz-like copse of stunted oaks, white cedars on the edges of the ravines. We stood and watched Wildcat Falls filling the canyon with snowy ice shards. We passed white oaks spackled with Aleurodiscus and Auricularia, rhizomorphs of Armillaria. We admired the magnificent root system of a white pine that was exposed by erosion as it careened downhill toward the trail and trees whose wood had twisted as they grew, vessels intruding upon one another in systematic asymmetry: anatomy becoming morphology, morphology becoming forest structure, structure becoming the ways in which trees and forests shape the human environment.

Which is what we were at Starved Rock to talk about. So we hiked out, past a grove of rock polypody, the undersides of whose fronds were pocked with spores, and fallen black oak shoot tips, evergreen leaves of white avens, decomposing trees hosting gardens of bonnets or split open to reveal an unexpected grove of turkeytail fungi. Snow was on its way, and we returned to our meeting with the sense of efficiency that you get when weather is coming and everyone in the group wants to get home. We drove back to the Arboretum after lunch.

I biked home from the Arboretum just after sundown, as the snow was beginning, when you have that delightful feeling of the snow just a little icy, pricking your cheekbones as home pulls you in, and you know it’s warm there and your family is home and it will be supper time when you get there, and there’s tea and maybe a movie that night.

The next day was snowy, then temperatures dropped to the low teens, where they should be in January. It was now a month past the solstice. Someone I was reading last year–probably Burroughs–pointed out that the climatic height of the season lands about one month after the astronomical turning point: the hottest summer and the deepest winter are each about one month after their respective solstices. I had never thought of this, but our temperatures bear it out: the hottest day of the year in Chicago is July 18, not June 21; the coldest is January 29 instead of December 212. Monday afternoon, I watched a great blue heron fly off over the road just as I was riding out of the Arboretum. Wednesday afternoon, stepping out of the house with the dog at 4pm, I felt as though I were looking through a bank of ice. At Maple Grove Forest Preserve, the snow was pierced by Carex jamesii. There were gray squirrel excavations and an orange mycena mushroom desiccating on a log in the snow. American pokeweed was crumpled cross-legged in the thicket where it had grown in abundance late into fall. Armillaria rhizomorphs were everywhere: on red oaks, on sugar maples, everywhere that bark was stripping from a tree.

I read back over what I’ve written and say aloud to myself some of the words I’ve chosen (Armillaria, babbling, copses and creekbeds, dawn). I suspect that only humans worry about the words we choose. Only a human could drift so far from itself as to say, as N. Scott Momaday wrote, “… and always I listen to my writing. I must hear it or else I cannot appropriate it to my spirit.”3 Only a group of humans would get together in a place as beautiful as Starved Rock to talk about trees. Yet we do. In the bargain, we get to enjoy the hell out of the waterfalls. We get to recognize that the world is beautiful. Can the other animals do that? I doubt it. I think the exchange is worth it.

It rained today, and the chickadees were singing. It’s dark out now, the snow is eroding away. I understand we are supposed to have more snow tomorrow, but the temperatures are projected to waver around freezing, so I don’t know whether it will stick around. I hope so. I so enjoy these few months of winter.