Spring peepers were calling this week in The Morton Arboretum’s East Woods, and false rue anemone foliage has re-emerged there and in Maple Grove. 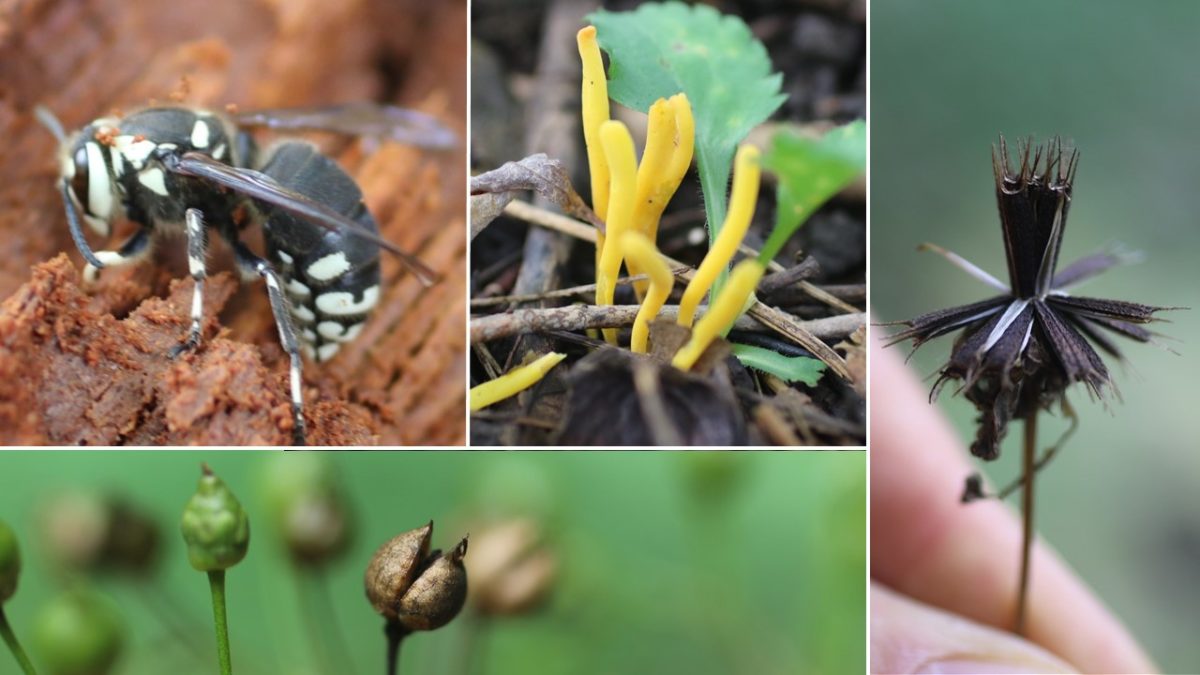 Monday morning, fog was pooled in the prairies beneath the power lines and draped between the spruces. There was a dusting of mosquitoes. Crickets were purring. The creeks and ditches were filled with water. Along the chipped trails angling up the moraine northwest from the Big Rock Visitor Station, stump puffballs continued to ripen, syrupy brown like piles of gulab jamun, smooth, the insides still white, mostly, but going to spore. Tiny puffballs had started to emerge in separate patches. Earthstars had erupted from the mulch throughout the East Woods. Stinkhorns were emerging and swarming with gnats and relentless carrion beetles. The young ones looked like brussels sprouts pushing up from the wood chips. The older ones had already fallen.

Spring peepers were singing all day Monday. I have heard chorus frogs and, I’ve suspected, the odd spring peeper in past autumns, but Monday it was peepers in every tree. The squeaks, trills and whistles were unmistakable, but shifted upslope and displaced in time by about 6 months. There were so many of them, I could not convince myself at first that they were really peepers, especially at this time when songbirds are migrating through. I stood still and watched, but I saw nothing. I waded into the sunflowers and towering wild lettuce to flush out any birds, but the calls only stopped, as frogs always do when you go hunting for them. Peeps punctuated the woods west of Big Rock Visitor Station all the way down to the service road that bisects the Heritage Trail and runs north through the meadow. I was surrounded by them, and there was nothing they could be but peepers. Nonetheless, only after chewing on it all day and walking out the same direction, then hearing them again on my walk home about 4:30, was I certain that these isolated cheeps and whistles were what they sounded like.1 We see what we expect to see, and we interpret data in light of things we’ve come to believe.2 They might sound like peepers, we tell ourselves, but it’s fall migration. They must be birds. To hell with evidence.

When I arrived Wednesday morning I had about 30 minutes to spare. I made a quick stop to listen for them again. There was a new crop of little stump puffballs coming up and tufts of Hemimycena in the chipped trails, a few grapefruit-sized white puffballs in the understory. These may be young giant puffballs, but I doubt it: I would expect them to be much larger, so they might be any of a number of species. I passed a false Solomon’s seal tipped with a raceme full of ripe berries in perfect condition, good enough to eat. When I got back to the same site where I had heard the peepers on Monday, there was no sound. Temperatures were about 20 degrees cooler than when I had been there on Monday afternoon. Gnats were still buzzing around the stinkhorns, but they were fewer and less frenetic. Then, from a hollow tucked in between the shortcut trail to Big Rock and the trail that runs west along the ridge of the moraine, a single peeper called. I walked down into the hollow and poked around for five or ten minutes, but there were no other calls.

It turns out, however, that the next 36 hours were filled with songs as unexpected as the spring peepers’. On my drive home, Coltrane’s solo on “Giant Steps” came over the radio, piercing the seams between measures as though there were no chord changes, as though the bricks etched across the staff had dissolved together. The next morning, as I biked toward the Roosevelt stop to catch a train to the university, a street musician playing vibraphone on the corner of Wacker and Jackson pounded descent with modification momentarily out of my mind. Then, after working all morning on a lecture, I came across campus toward Cobb Gate and heard the unmistakable sound of a pipe organ. Surely this was my mind playing tricks, wishful thinking. I was hearing construction noise, or a truck rumbling down the street. But no: subwoofers parked along the sides of the archway between the library and campus were pumping out pipe organ music, bird songs, low rumblings you could feel in your knees.3 You hear what you expect to hear.

I’m writing this on Friday, which I’ve taken off for my birthday, after visiting Maple Grove. The maple leaves have turned yellow in the past week and started falling, the lower branches of the elderberry corymbs have started breaking, the ray flowers have fallen from the wingstem, the zig-zag goldenrod heads are turning pale and filling with feathery achenes. The woods are filled with lisping sparrows. Wood nettle leaves are chewed to lace, but there is enough sting left in them to catch at least this botanist off guard. Pale jewelweed is provisioning its late-season capsules. The galls blistering along its leaf midveins are darkening along one side. I suspect that the gall midges inside are nearing maturity. I didn’t break any open today, out of a sense of compunction that I rarely feel regarding the welfare of gall-making insects. Wild leek has dropped about a third of its seeds. Cystopteris fronds are crumbling, fowl mannagrass culms are reclining, enchanter’s nightshade leaves seem to have all fallen, leaving the stalks bristling with fruits. False rue anemone is sprouting anew, however, and there is an ankle-high clump at the base of a maple near the entrance to the woods. Christy Rollinson found the same thing in her phenology survey a week ago in the Arboretum’s East Woods. I found a few young shoots in December of last year as well. Is fall re-emergence of false rue anemone the new normal? Or have we simply been failing to notice it in past years, because we weren’t expecting spring plants to emerge in the fall? You sometimes don’t see what you don’t expect to see.

Carex jamesii clumps stand out like sentinels in the understory, bright and alert while the trees and most of the forest herbs are trundling off to bed. They will remain green and active under the snow all winter long. I visited a clone of Carex woodii twenty feet across that I run across every few weeks, and I was impressed at how it seems to exclude almost all other species. There are a few thigh-high ash saplings, a solitary and well browsed burning bush, a handful of Virginia waterleaf and zig-zag goldenrod, but little else. Is this competitive exclusion, or is the sedge just growing in an opening in the sugar maples where nobody else wants to grow? Distinguishing cause and effect from common cause and plain old dumb luck is the bane of most observational studies, with the exception of phylogenetics, the observational science that insists on reconstructing history.

Tall beggarticks is shedding sharp-tipped achenes that stick in your socks and sweaters. Jack-in-the-pulpit is reluctantly letting go of the last of its berries. Late figwort capsules are mostly broken open. Crown-tipped coral fungus has been out months, and today I found a sprawling coral fungus that looks different, white coral fungus perhaps. Handsome clubs have emerged from under the leaf litter. Honey mushrooms are growing not far from where I’ve been finding one of their messier relationships, the aborted entoloma, for the past few weeks. A nearly-dead sugar maple near the bridge across St. Joseph Creek is sprouting shelves of late fall polypore, Ischnoderma resinosum, a saprophyte, though the tree has one branch growing about 20 feet up toward the north. It appears to have been topped sometime in the last decade or so, and the top to have fallen off to the south side of the bridge, where it lies decomposing on the slope just up from the creek. Deeper in the woods, what I take to be the same fungus is growing on a dead standing ash. Stump puffballs are emerging from the mulch forming inside a rotten stump of another fallen ash, where the brown rot is wettest and least recognizable as wood.

As I was leaving, I passed a brown-rotted log and broke into it to see what was going on inside. A bald-faced hornet hid in a hole right at the edge of the piece I broke off. Was she preparing to overwinter? From what I have read, this is the time when bald-faced hornet queens should be settling in to wait out the cold. She was not aggressive, did not defend herself, barely righted herself when she fell over. Her abdomen was pumping, voluntarily or not, and I wondered whether this was an ovipositing movement. I wondered whether she was a queen at all, a worker chewing on wood too late in the season to make a nest of it, or someone else altogether.

Further on, a melanistic gray squirrel scampered away from me and up a tree. But no toads or frogs singing. During the day, I found out that Christy Rollinson found spring peepers in her seed traps in the East Woods, and Meghan Midgley reports that they’ve been showing up in her nitrogen deposition collectors. I can’t help thinking this is an odd fall, but every season is odd in some way. Maybe in another 50 years I’ll know what normal is.

1 For a nice description of late-fall peepers and the bafflement they can cause naturalists, see Caduto, Michael J. 2016-09-16. Fall peepers. Northern Woodlands. url: https://northernwoodlands.org/outside_story/article/fall-peepers [accessed 2019-10-01].
2 For an extended and nuanced consideration of the implications of confirmation bias, see Powers, Richard. 2018. The Overstory. W.W. Norton & Company. Along the way, you’ll find an extended and nuanced consideration of a lot of other things in there as well.
3 David Wallace Haskins, Breath, 2019. You can read more on this exhibit and the other exhibits associated with The Chicago Sound Show, at the website of the SMART Museum.