In deep time, species come and go. For now, though, I wish I could go back and botanize this forest for a season or two with ashes still in it. 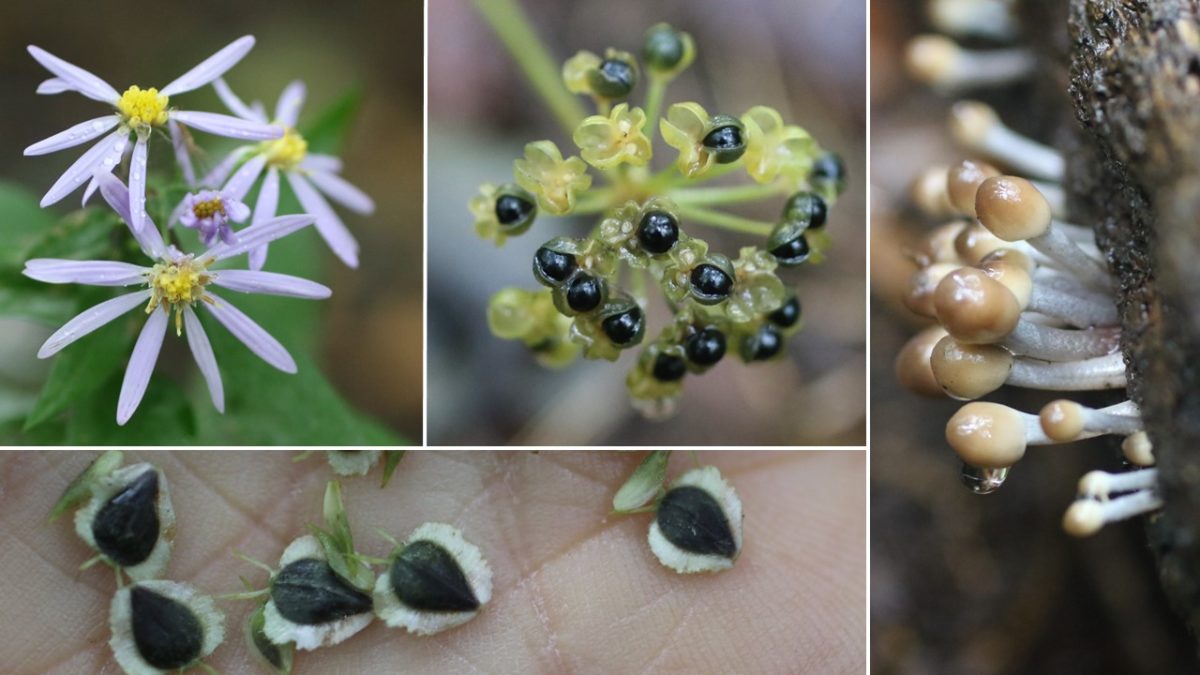 Friday night the rain pummeled the forests. It appears to have blown some birds into town: the parking lot by Mays Lake was lisping with sparrows when I arrived with the dog at around 6:30 the next morning, and song sparrows were singing. On my way out the driveway, a bird flew off from the middle of the road that looked for all the world like a woodcock. I didn’t get a second look, however, and I am not certain. The rain knocked down acorns by the bushel. Disembodied red oak acorn caps are washed into the parking lot corners. False trails appeared in the woods overnight where the rain had washed the leaf litter clear and left the detritus of early autumn along the margins, twigs tangled up together and stretched downslope. Autumn was already getting a start. Shagbark hickories were falling ripe this week, and black walnuts had begun blackening beneath the trees, lolling over on their sides and caved in where the husks have started to decompose. Buckeyes are cracking open, husks rolling off, nuts coming to rest unnervingly reminiscent of eyeballs that have been kicked off to the sides of the trails. White oak acorns have been falling fat and furious and germinating on the ground: root tips are tucked in along the stylar ends of the nuts or facing straight out, endeavoring to pierce the leaf litter and get a toe-hold before the desiccating winds of winter. Every tree knows fall is coming. Friday’s storm sealed the deal.

I spent a couple hours Saturday morning in Maple Grove Forest Preserve. St. Joseph Creek was about a foot higher than usual and murky. The ephemeral ponds were all recharged, ankle-deep. The American pokeweed is majestic, dripping with racemes of plum-colored berries, towering over the dilapidated jewelweed–they barely made it to fall–like the oldest white pines in the northwoods piercing the maple canopy surrounding them. Leaves are yellowing: poison ivy, wood nettle, choke cherry, ash, Virginia creeper, basswood, American elm, large-flowered bellwort, black snakeroot and white grass. One maple that has fallen across the creek is showing the oranges and reds of October, but barely.

Jumpseed and stickseed (Hackelia) fruits are blackening. Blue cohosh foliage has fallen, abandoning the naked seeds to whatever birds and mammals will take them. They are unnervingly blue, floating among the shrubs. Doll’s eye berries are hanging on, and their parents appear still to be laying up treasure on earth, provisioning the rhizomes for next year, not giving up on their leaves yet. Why? Here are two herbs that seem so alike in habit and behavior in midsummer. Perhaps we need to look to early spring. The blue cohosh I noticed as early as April 11 this year, about to bloom two weeks later. White baneberry I noticed in flower only in mid-May. Perhaps each chooses its risk: blue cohosh bets against late spring snow, white baneberry against early frost. Wingstem fruits are clinging in tight little heads. The blue asters (Symphyotrichum shortii, Symphyotrichum drummondii), calico aster, and zig-zag goldenrod are all in full bloom. Flowers are still hanging onto the white rattlesnakeroot. A stand of phlox persists near the top of the hill.

I walked through the shin-high sugar maple seedling grove tucked between the creek and the houses at the northwest edge of the preserve. There is very little there, though a colony of perhaps 300 to 500 wild leek scapes in full fruit captured my attention for several minutes. A fallen tree that I suspect based on its stature and landscape position is a sugar maple lies rotting like a canoe filled with decomposing sawdust. The outer layers of wood are still intact, curled around a moist and granular humus. Why have the outer layers persisted while the inside has rotted? Nearby is a downed tree that I take to be a red oak, but it has done the opposite: the outside is rotted away, leaving the bole a brown-rotted, intact core that looks as though it would go to pieces if you kicked it, which I do not. It is riddled with holes and architectural in its beauty, blocks of xylem angular and displaying the attributes of wood that we look for in anatomy class, cradling pockets of chipped wood actively being worked over by earthworms. In an otherwise magnificent woods, this lawn of maple seedlings strikes me as relatively sterile, but even here there is a lot going on.

The sheer number of dead ashes and their immensity hit me as I walked Saturday. I notice the dead ashes in these woods every time I walk: the network of ridges in the bark of the lower bole and, especially at this season, the densely packed fungi on the trunk–turkey-tail, chicken of the woods–grab my eye as I am walking by. Often there is a gap in the woods where the snag still stands, and trees or shrubs or tall late-summer herbs grow thicker. What struck me on Saturday was the fact that these ashes that have mostly all died within the past decade were as big around as the red oaks and sugar maples that dominate the forest… and there were many of them. Emerald ash borer appeared in DuPage County in around 2007. That’s just twelve years ago. There are still little ashes sprouting in the woods, but I have not seeing a single living large ash in these woods. Every one is still a home to insects and fungi, feeding the woods for now. But within a generation they will be as gone to us as the American chestnut.

I walked out past the white oaks and bur oaks at the top of the hill by the parking lot at the south end of the preserve, each shedding acorns, doing well, standing in for the ashes, filling in for them as best they can, but not really. No species can stand in for another. I passed a row of trooping crumble caps on a fallen log that glistened in the rain like porcelain. Somehow I started thinking about the contingency of evolutionary descent, radiation, and adaptation, how you get only what you get, and only once. Pull one thing out, and all the other species will fill in as best they can. Fifty million years hence, whoever is here will miss the ashes in the way that we miss the tree-sized horsetails and lycopods, the velociraptors. They will have their world, one that comes from ours but has a very different shape. “When viewed in deep time,” Robert Macfarlane writes, “things come alive that seemed inert. New responsibilities declare themselves. A conviviality of being leaps to mind and eye. The world becomes eerily various and vibrant again.” 1

In deep time, species come and go. For now, though, I wish I could go back and botanize this forest for a season or two with ashes still in it. Somehow I’ve already forgotten what it was like, and it’s only been ten years.

5 thoughts on “A conviviality of being”