He tried to tell his freshmen the simplest things–why a deceptive cadence makes a listener ache or how a triplet rhythm creates suspense or what makes a modulation to a relative minor broaden the world–and found he didn’t know.
— Richard Powers, Orfeo 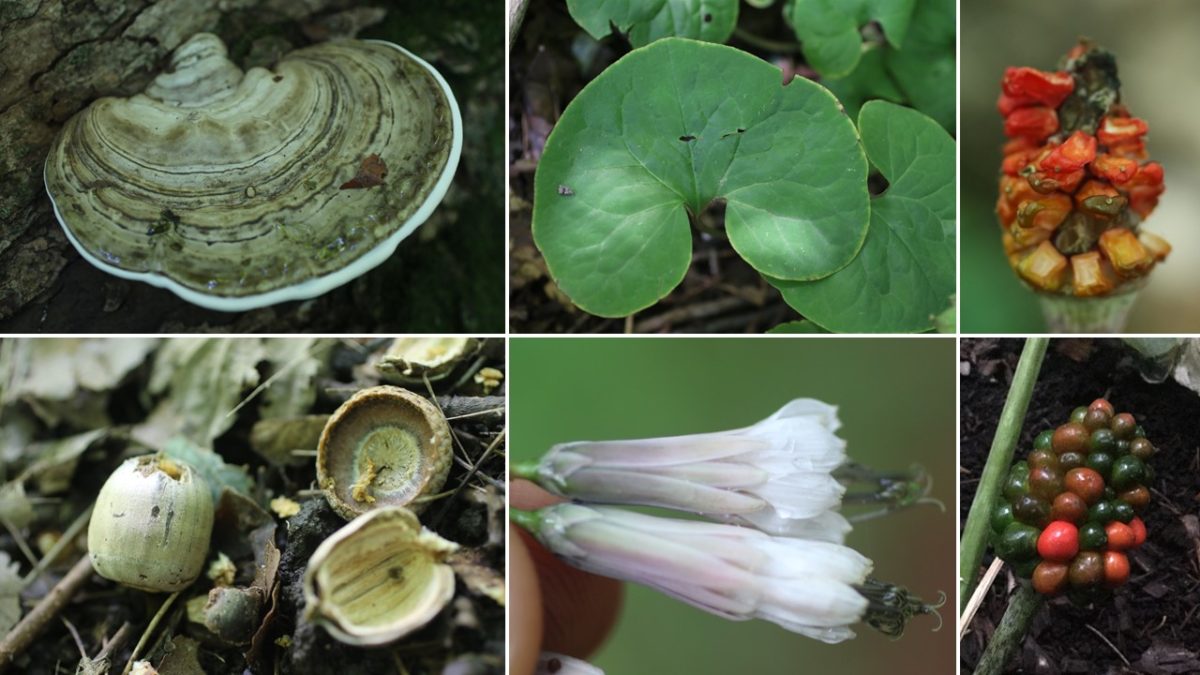 Acorns have begun to fall in earnest, and Monday the chipmunks were racing across the trails with their cheeks packed full. Some bur oaks are raining acorns, others are mostly green, but most are halfway-ripe. The white oaks have started dropping acorns, and swamp white oak acorns are swollen on the street trees in our neighborhood. Red oaks have been shedding nuts for a few weeks. Monday, Jack-in-the-pulpit inflorescences were as multicolored as flint corn. Half of the false Solomon’s seal berries were ripe, the other half salmon colored. Carrion flower berries were almost black, and Joe-pye weed flowerheads were feathery with ripening achenes. Tufts of pappus were extruded from the tips of the flowerheads on the 6 to 8-foot tall wild lettuce–perhaps taller, but I did not go far off trail to check. Big-leaf aster and zigzag goldenrod were in bloom. Beak grass grains were hard between the teeth. The honewort schizocarps were fat and football-shaped, leathery, hard like nutlets, not yet brittle. Dryad’s saddle was darkening on the same tree where I had found it in late July last year, Crepidotus was sliming across the surface of fallen logs, and a soft, white, doughy fungus I do not recognize was sprouting from the woodchips. The jewelweed was becoming ratty, leaves torn and chewed and crisscrossed with slug tracks. The ephemeral frog pond just north of the spruce plot was dry.

I returned to the same paths on Friday. Thunderstorms had rolled through from about 4:00 to 6:30 that morning, shaking full red oak acorns and ripe walnuts to the ground. About half of the bur oak acorns falling looked to me to be viable, the other half perhaps aborted or weevil-infested. I doubt that the squirrels care, and the chipmunks were still racing around, capitalizing on the windfall. Even after the rains, the ephemeral pond was dry. Eastern wood pewees and crickets were almost all I heard aside from a few mosquitos and lethargic bees and lisping birds in the shrubs that I could not make out. If there were migrants–and there surely were–I wasn’t hearing them. Many plants were senescing. The most obvious to my eye were the variegated false Solomon’s seal and the yellowing leaves of enchanter’s nightshade, which I saw everywhere. Giant puffballs, which Christy Rollinson had reported the previous week, seemed to have erupted, along with scatterings of stump puffballs along the chipped trails. They have not yet to have started browning inside, though the epidermis of some of the stump puffballs is darkening. An enormous white jelly fungus on a fallen maple was turning creamy. The delicate, slender-stemmed Marasmius capillaris had emerged on a rotten log.

Galls on the wood nettles appear to have shifted from the leaves to the inflorescences. I first noticed them last year in late August, and I mistook them for fruits. This year, beginning in June, I was finding them on the leaves only, but now they have shifted back to the inflorescences. I have presumed that these were all formed by the same insect, Dasineura investita, but perhaps not. I can imagine two explanations for the move. First, it may be the same insect, ovipositing where resources are most concentrated. As the plant allocates sugars to the inflorescences, perhaps that is a better place to leave your children. This may be a second wave of the same insect, separated in time but not place. Second, this may be an entirely different insect, specializing on the inflorescence. I doubt it, but for no very good reason. I’ve neither reared them nor hunted down a good life history of gall midges.

Skeletons of silky wild rye stood along the trail edges, deceptive, few florets persisting among the long-awned glumes that will persist into winter. The ray flowers on the woodland sunflower had almost all dropped, leaving terse little heads of disc flowers to ripen in the understory. False nettle fruits were ripe, crunchy, similar in size and texture to smallish grains of uncooked quinoa (no relation: quinoa is an amaranth and spinach relative), standing close by the climbing false buckwheat, whose winged fruits are covering any tall plant it scrambles up in late season exuberance. Fragrant bedstraw was still fruiting. White rattlesnake-root was in full flower in the openings, elm-leaf goldenrod along the shadier edges, flowers lined up along the arching inflorescence axes like the trails of shooting stars. The first flowers were blooming on calico and Drummond’s aster. The yellow giant hyssop was flowering. Doll’s eye berries were blackening on the stem if they weren’t ripe and ready to go. Pokeweed berries on some plants were as dark as plums. Wild sarsaparilla and American elm leaves were turning.

Yesterday morning, Saturday, I headed to Maple Grove Forest preserve to find the bridge covered with the dusty webs of funnel-weavers. Did they appear over the course of a single week? As old as they looked, I thought they were abandoned, but each one on closer look was occupied. I’d find the spiders only when I moved slowly, inched my way in. Sensing me, each spider would retreat smoothly down the neck of its funnel and be no more than a gray shadow behind the webbing. In the St. Joseph Creek floodplain, elderberries have almost all fallen, leaving lacy raceme branches. Wingstem is still blooming, and bumblebees are still buzzing into jewelweed flowers. White snakeroot has just started to produce plumes of seed, but only where it stands exposed to the sun.

There are new fungi to see this week. Aborted entoloma appear to have erupted from the soil in just the past few days, sprouting up beneath the leaf litter like manna. This white, bumpy thing is found in at least a few patches in Maple Grove Forest Preserve right now. Research1 suggests it is most likely a pathogen of the honey mushroom, which I’ll have my eyes open for now that I realize these two go together. What I believe to be golden chanterelles are emerging from the soil right now as well. On a fallen tree, I came across an entire series of shelf fungi that I think are artist’s brackets, ranging from the first-emergent white edges to fully formed fruiting bodies. One of them appeared to be exuding black ink. On rotten logs you can still find orange mycenas, which I’ll never tire of, and from the same genus another but relatively nondescript bonnet. But not unexciting! For a few of the bonnets I found had been parasitized by another fungus, the bonnet mold, which lives off of the bonnet and produces spore-bearing hyphae from the bonnet cap, making the cap look like it has sprouted a beard. Will it reduce the cap to slime? Another whole set of lives going on beneath our noses that I knew nothing about before this weekend.

Wild leek is producing its black seeds, which are hardening up but still enclosed in the papery sheaths. Squirrels are ravaging the red oak acorns, but they are not getting them all: I came across a seedling of what I take to be bur oak from last year’s crop, one that most likely was cached but forgotten. Great horned owls are calling. Leaf miners (Cerodontha, though the species is unknown) have etched road maps into the white bear sedge leaves. Wild ginger leaves are edged with yellow, sprawling, a sure sign that days are growing shorter and cooler. Tearthumb is in bloom. I found what I thought at first were fresh basswood seeds under a tree, but they appeared on opening to be pithy inside, like galls. I need to find more to see what they really are. Beneath another tree a single oak apple gall had fallen. Berries were mostly dislodged from the Jack-in-the-pulpit plants I passed. One Jack I passed was covered with desiccated fruits. Touching them, I roused a male spider who trained his attentions on the stem ahead of him, then turned and readied himself for a fight, pedipalps cocked. Blue cohosh seeds are bright blue, the seed coats membranous, tearing easily. Large-flowered bellwort leaves are variegated. The sedges are still looking good, as sedges always do: Carex jamesii hummocks are deep green, lush, and scrawny little Carex radiata has sent up a flush of young leaves at the center of a spray of flattened culms splayed out around the base of the plant.

Saturday night was the opening for a show that Rachel curated at Lillstreet Art Center. Near the end of the evening, we stood on the rooftop garden with friends and watched the sky growing dark. Everything was dim and monochromatic, and at one point we realized with surprise that a bump we were looking at on the parapet was a katydid. As Rachel got close enough for a photo it clicked for her. We recognized the call, which we had suspected was a katydid but didn’t know for sure till now. It flew out over Montrose.

Look at all these individual moments over the course of a single week, crammed into the margins of the mornings, evenings, weekends. Whatever it is that made me study sedges, whatever it is that makes me want to go for walks and turn over logs, the same thing will make me replay this moment over and over, watching with my wife as the katydid disappears into the city night. I’ll have it with me 50 years hence. These instances broaden the world. Who can say why?

3 thoughts on “What broadens the world”