“… if I want to notice the lesser cataclysms of valley life, I have to maintain in my head a running description of the present.” — Annie Dillard, “Seeing,” Pilgrim at Tinker Creek 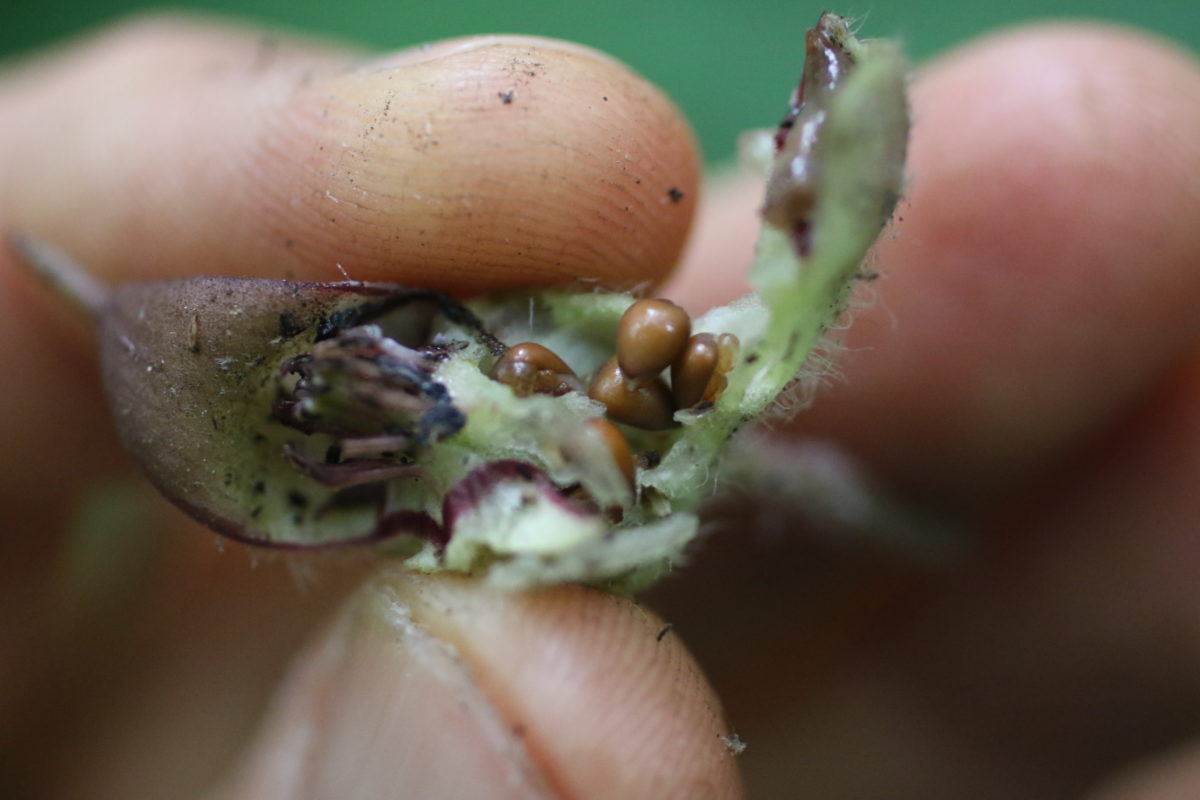 The Midwest has had an unseasonably rainy spring. The plum tree in our backyard seems to have broken loose of its roots and is wobbling in the hole it was planted in 4 or so years ago. Did the roots rot? Has it floated upward in the hole we planted it in? The tree seems to be faring well but needs to be staked and the soil tamped back down. The holes the dog has dug in the backyard were full of water most of the month of May. Fallen logs in the woods are still sprouting dead man’s fingers and collared parachute mushrooms. But not until a week ago, the Saturday before summer solstice, when the rain came down and soaked Brooklyn and I on our walk around the block, did it seem we had a summertime rain instead of a spring shower. The toads in the marsh beside the school must have thought so as well, for they sang through the rain while Brooklyn sat down on the sidewalk and looked up at me, dripping, ears limp. We headed home.

The weekend dried out, and Monday morning Maple Grove was full of summer birds: red-eyed vireos, blue-gray gnatcatchers, robins, wood pewees, red-breasted woodpeckers, great-crested flycatchers. This solstice week has felt like summer through and through. The second flush of wildflowers is starting to retire, the third flush is beginning to flower, while the earliest spring wildflowers have mostly withered. One of the last of our woodland sedges to fruit, Carex tribuloides, has filled out its inflorescences while I wasn’t watching, momentarily standing as stiffly upright as it ever does–this species rapidly goes from the stock-upright culms of early childhood to slouching against any door frame it can find in early adolescence, when the inflorescences put on a little weight–while the achenes harden up. Upslope a bit, Carex radiata is shedding perigynia and looks as though it’s been trampled. Perhaps it has, or perhaps it hasn’t: Carex radiata always looks about the same by now either way. Blackberry and white avens came into flower, homely white in shaded disturbed trail edges, and started turning to fruit. Hooked buttercup achenes have hardened. Schizocarps on wild geranium are taut, poised to fling their seeds off into the world if they’ll just dry a bit more; in our garden, they already have, and I expect that by the time you read this they’ll be kicking around the woods as well. Wild ginger berries are spongy, filled with lustrous green seeds that are browning, still maturing. A bubbly, gelatinous ruff of fatty tissue clings to the crest of each seed, a reward for the ant that will only take the seed and bury it in soils that are nitrogenous and actively churned. What’s good for the ant is good for the ginger. Hard young berries are reddening at the tip of the false Solomon’s seal, about the size of BBs. The first berries of hairy Solomon’s seal are bursting out of the corollas. We started eating Juneberries and white mulberries this week.

Great waterleaf was the pale blue princess of the woods near the beginning of June; but now the petals have fallen, and the spidery inflorescence branches are tipped with capsules that ooze pulpy white ovules when you pinch them. Pale touch-me-not forms groves that have grown from thigh-high to my chest in the past two weeks, shading plumes of Carex jamesii. I found one in fruit Monday in Maple Grove, a surprise as I have not yet seen the plant in flower. The more I thought about it this week, the odder it seemed. It took me until a walk through the Arboretum’s East Woods on Friday, where I was finding the same thing, to realize that these capsules must be produced by cleistogamous flowers. Cleistogams are closed flowers in which the stigmas and anthers are tucked in together, external pollination is excluded, and the plant is almost guaranteed some fruit. They are the plant’s answer to the risk of not getting pollinated. Many species produce cleistogams, perhaps most famously in our flora in the violets, but there is a cost: without sex, recombination is limited to the genes mom and dad gave you. The opportunity to innovate new solutions to environmental challenges is reduced. You might consequently expect a plant to hold out until late in the season to produce cleistogams, but capsules of touch-me-not are already starting to explode before I’ve seen a single outcrossing flower (chasmogam). It turns out that cleistogamous flowers, presumably because they are less costly to build—no allocation to attractive structures, including showy corollas and nectar designed to entice bumblebees and ruby-throated hummingbirds, and less pollen needed per successful pollination—go from floral bud to mature capsule on average 10 days faster than chasmogams.1 In fact, each chasmogamous flower costs the plant 100 times as much energy to produce as each cleistogamous flower. Little wonder, then, that touch-me-nots produce on average more cleistogams than chasmogams. Some plants produce only closed flowers. This year, I’ll have my eyes open for the timing of the showy flowers.

I found a translucent gall on the surface of one wood nettle leaf this week. It looked a bit like cloudy tapioca pearls with a dark heart. Inside grows a gall midge, Dasineura investita from what I’ve been able to tell. Dasineura is a genus of tiny flies that afflict conifers and flowering plants alike, including blueberries, maples, wheat, and a host of other genera. Last year I didn’t notice them until the end of August, when I found them dangling in the inflorescences. They may have appeared a bit earlier this year, but I suspect not too long ago. Last year was first I’d ever noticed them. It looks as though I’m not alone in this: in iNaturalist, the pot into which almost every naturalist, botanist, entomologist, mushroom and moss and lichen enthusiast armed with a camera or smartphone is pouring georeferenced photos, the species seems to be widespread in northeastern North America but very sparse (all of 21 records in total on iNaturalist as of 22 June 2019). Either these galls are very infrequent, or they are being badly underreported. Perhaps they aren’t even noticed. I find it hard to believe that a map of all the individuals in a given year wouldn’t carpet the woodlands of eastern North America. There’s one more thing to watch for this year.

What would our forest be like without this gall midge and the cleistogamous flowers of touch-me-not? Profoundly different, I suspect, as these two species, which almost invariably co-occur in rich woods and floodplains throughout northeastern North America—get a slap from wood nettle, and you can almost always find a touch-me-not within arm’s length to crush and rub on the affected skin—form an awful lot of biomass. Why am I noticing the midges only the past two years, the timing of cleistogamous fruits only this year? I think it’s in part because I’ve been taking pains to write down these casual observations. Writing brings the world into focus more sharply than any hand lens (of which I’ve had and misplaced more than my fair share). Writing isn’t universally favored as a means to clear-sightedness. Socrates objected to writing on the grounds that, in his account, it blathers mutely. Written words “seem to talk to you as though they were intelligent, but if you ask them anything about what they say, from a desire to be instructed, they go on telling you just the same thing forever.”2 With writing, Socrates worried, people would mistake hearing for understanding. And writing supplants memory! Socrates recounted how Thamus, the Egyptian god and king, reacted to the invention of writing: “If men learn [writing], it will implant forgetfulness in their souls; they will cease to exercise memory because they rely on that which is written, calling things to remembrance no longer from within themselves, but by means of external marks. What you have discovered is a recipe not for memory, but for reminder.”3

Maybe so. But when I write about things, I see them more clearly, because I have to fit them together. “I don’t have my novel outlined and I have to write to discover what I am doing,” Flannery O’Connor wrote. “Like the old lady, I don’t know so well what I think until I see what I say; then I have to say it again.”4 What I write about I understand better.

Summer rolls on. Goldenrod leaves are inscribed intricately with leaf miner trails. Silky wild rye and bottlebrush grass bristle with spikelets. Foul manna grass spikelets appear to be nearly ripe. Last week, on my bike ride out, smooth brome was festooned with yellow anthers. This aggressive plant is doing a number on our experimental prairie, so I’m not fond of it, but when it blooms, it is something to behold. This past week, there were still a few stigmas poking out, but the fireworks are over now. Honewort has come into full bloom. The scapes of wild leek have come up and are tipped with floral buds. The spathes of wild garlic at the beginning of the week were just splitting open to show the flowers inside; by the end of the week, the first plants were in full flower. False nettle and Joe-pye weed and enchanter’s nightshade inflorescences are emerging while false rue anemone is reluctantly giving up the ghost. Poison ivy is flowering. Large flowered bellwort fruits, by contrast, have continued swelling. I thought they were done when they hit chickpea size, but this week they are larger than marbles, as big around as my thumbnail. And the fruits of summer have begun: black snakeroot, with its bristly schizocarps clustered together with tiny flowers; sweet cicely fruits are rigid and pungent; carrionflower umbels are packed with tough berries; jack-in-the-pulpit berries are forming, green and tough. Green dragon is just flowering inside the spathe. Pondweeds are in flower.

This morning opened with a thunderstorm, and more rain looks to be on its way this afternoon. I’ll leave you with a poem from a collection by Charles Simic5 that Rachel picked up for me this week:

4 Letter from Flannery O’Connor to Elizabeth McKee, near the outset of their lifelong friendship, July 21, 1948. In: Sally Fitzgerald (1979), editor, The Habit of Being: Letters of Flannery O’Connor, p. 5. Farrar, Straus & Giroux, New York.

2 thoughts on “A running description of the present”