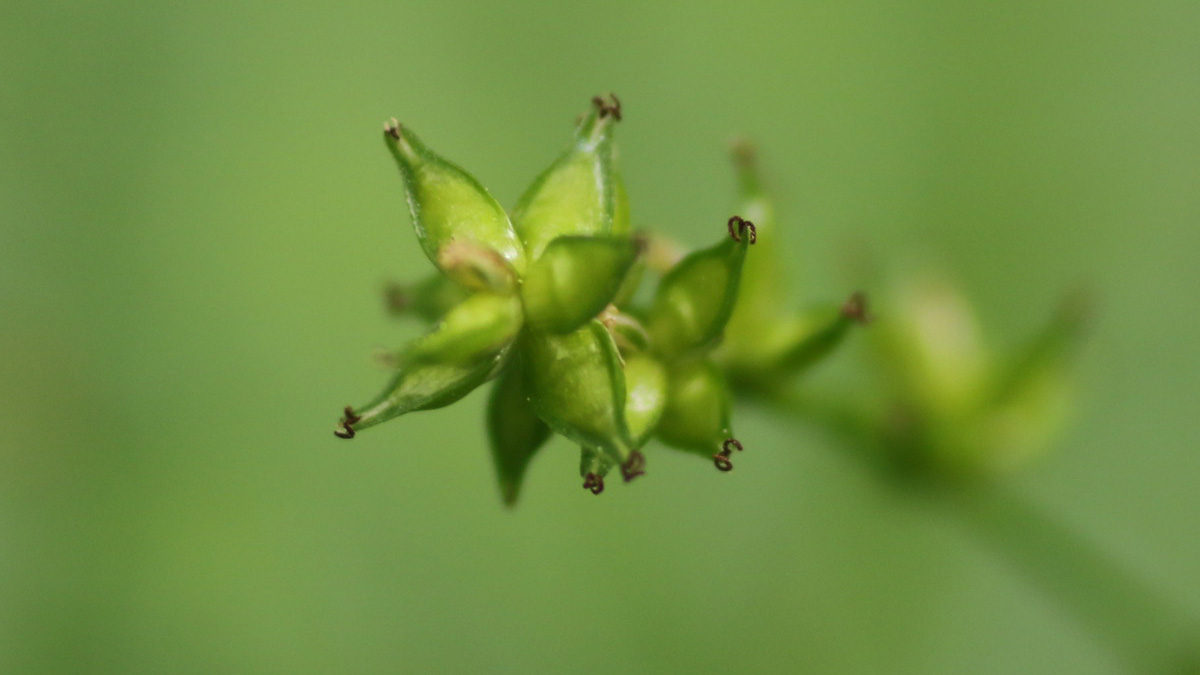 The first Thursday night in June, every bird’s-foot trefoil along the road I ride into the Arboretum squeezed out spittlebugs. That day I hadn’t noticed even one: Friday, the nodes were glorious with them, each hiding a froghopper nymph. One week earlier, I had found dead man’s fingers in the chips along the trail at the east end of the woods. They were like lights along the edge of a runway on the trail running west from Big Rock Visitor Station. Caterpillars were rolling the raspberry leaves. Pruinescent common whitetail dragonflies patrolled the roads and our garden. Bumblebees meandered low over the forest floor. Rice cutgrass had become sharp enough to cut my calves, and woodland sunflower was knee-high. Tendrils were prominent on carrion flower. Great-crested flycatchers and eastern wood-pewees and red-eyed vireos were singing. Ticks and mosquitoes were out in their glory.

My eyes, though, were filled with sedges. I had taught a two-day Carex workshop the last two days of May, and I’d been drilling the students on what they were seeing from ten feet away. I teach like I write: about things that puzzle or otherwise interest me. Right now, I like to be able to recognize a species from a distance, especially a small species. It is marvelous to me that the actions of genes expressed in concert manifest in cells that differ in somewhat predictable ways in size, shape, chlorophyll content, and consequently in a form that I can recognize from across a field. A die cast thousands of generations ago meets one that was thrown last week, and these together determine the finest points of morphology, subtleties of form that we then detect out of the corner of our eye as we turn from one trail to the next.

So I spent our walks teaching aspirationally, wanting to see more clearly from a distance. I would see characteristics of a plant and ask the students to identify it from where they stood on the trail, coaching them and myself at the same time. They would see what I was describing, or they would not, and I would find what traits I myself was not able to see. In only two days, I found I could see attributes of the whole plant that previously I hadn’t known. And eyes so filled, I found the next week that our woods are filled with sedges I had been missing on my walks of the previous 14 summers. Wood’s sedge, which I already knew was more abundant in the East Woods than many realize, is even more common in the East Woods than I had thought. Its leaves rise fountainlike and fall moplike, especially, as far as I can tell right now, from Big Rock Visitor station eastward. It favors moist draws and protected depressions, though not the truly wet areas where Carex tribuloides is flowering now. I notice it this year farther off the trail than I have before. Along the west side of the hill near the far end of the woods, just before you reach the gated service road leading out toward Finley Road and the interstate, I first noticed Carex hitchcockiana as a single plant several years ago. Now, on my bike ride home in the evenings, I see its lanky culms radiating out from central points across the hilltop, stiff, sparse, occupying gaps in the understory matrix. I have started noticing it on the south side of the road as well, standing beside the soft and crumpling Carex hirtifolia as I race past. And Carex normalis has, I think, ceased to be quite the enigma it’s been to me for a number of years. Its culms lean over the trail, shedding perigynia at each step, more common in the west half of the woods.

“I cherish mental images I have of three perfectly happy people,” Annie Dillard writes in Pilgrim at Tinker Creek. “One collects stones. Another–an Englishman, say–watches clouds. The third lives on a coast and collects drops of seawater which he examines microscopically and mounts. But I don’t see what the specialist sees, and so I cut myself off, not only from the total picture, but from the various forms of happiness.” I am not Dillard’s cloud-watcher or stone-collector. If the world is our garden, then I am often like a dog set loose in it who snuffles and snorts at every plant and stone and then falls asleep exhausted, only to start again upon waking. But my affection for sedges and the narrow spaces they inhabit has lasted more than 20 years, long enough to teach me the happiness of gradually accruing understanding. I have collected them in places both homey and remote, and when I find them now, I often think of some sedge relative in Japan, China, the Smokey Mountains, Alaska, Mexico. Sedges are almost everywhere, and as a consequence, on almost every walk I take, I run into old friends. It’s fine with me not to be working on orchids: I don’t see them so often. With sedges, I encounter the objects of my particular affection every day.

Practically every sedge in the woods was in its glory in this year’s first week of June: Carex jamesii, C. hirtifolia, C. normalis, C. blanda, C. albursina, C. radiata, C. rosea, C. hitchcockiana and C. oligocarpa, C. sparganioides, C. woodii, C. sprengelii, C. cephalophora, and C. grisea could all be found in full fruit along the East Woods trails. But with the recording of sedges coming into flower, fruiting, flourishing and senescing, then greening up again in the spring, I’m hanging onto all the other wildflowers as well, most especially the ones in the woods. The first week of June brought schizocarps erect on wild geranium, about to disperse; developing drupes on chokecherry; and toothwort capsules dehisced, seeds shed to next year. The fleshy fruits of prairie trilliums thickened up at the bases of the withering maroon petals, and the large-flowered trillium fruits swelled where the petals had dropped off altogether. Mayapple berries hung beneath the leaves, and white baneberries nearly at chest-level were starting to swell, not yet recognizable as doll’s eyes. The burry schizocarps of cleavers were as big as BBs. Sweet cicely schizocarps were hard but not quite brittle, pungent. The capsules of big-flowered bellwort hung like cooked chickpeas. The achenes on rue anemone were rubbery, black snakeroot was shedding seeds. Solomon’s seal flowers were just opening up and the inflorescences of honewort were pinpricks of light.

It’s the middle of June as I write this, and we’re past the height of sedge season. I have turned my attention to other matters. Yet on our walk through Maple Grove Forest Preserve tonight, after listening to a pair of great horned owls call back and forth, Rachel and I stopped to look at a colony of Carex davisii along the trail, one of only two known populations of the species in DuPage County, and one I had failed to notice in numerous walks there over the past 10 years. Annie Dillard was right when she wrote that knowing sedges makes the “least journey into the world… a field trip, a series of happy recognitions.” Having noticed the species once, I’ll see it every time I walk that trail, no matter how long I live.

13 thoughts on “Various forms of happiness”