The spring ephemerals have begun to die back this week in earnest, and the spring migrants were mixing with our summer birds. 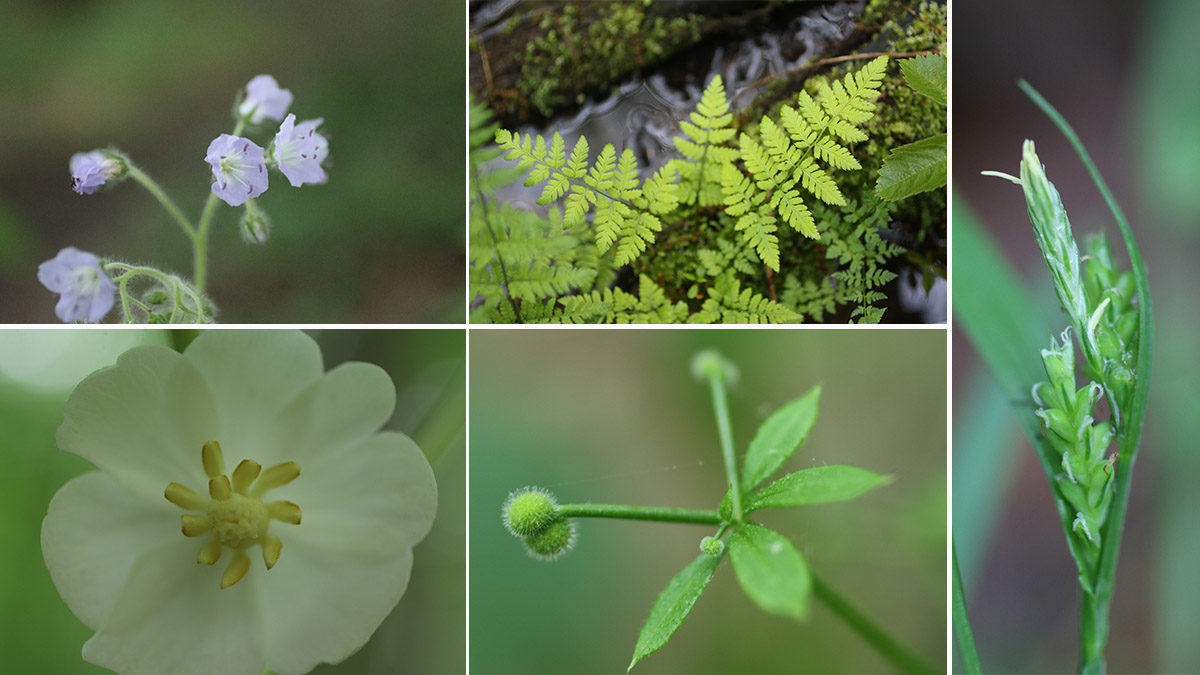 This moment reigns as far as the eye can reach.
One of those earthly moments
invited to linger.
— from “Moment” by Wislawa Szymborska, Monologue of a Dog

Temperatures last week fluctuated between the low 50s and the low 80s. The forest canopy has filled in almost completely. By Monday the basswood leaves were the size of teacup saucers, and by Thursday the lowest sugar maple leaves were fully expanded. It is darker in the morning forest understory now than it was even a week ago, and the wildflowers have picked up on it. False mermaid has flattened like seaweed clinging to a rock. It is yellow and bedraggled, but the nutlets at the tip of each shoot are continuing to harden up, senselessly drawing what resources they can from their expiring parents. Leaves on toothwort, trout lily and wild leek are streaked with pale green or white, starting to senesce. The cotyledons on touch-me-not are yellowing. Everything that was brightest and most beautiful two weeks ago is being overrun by summer, as wild lettuce and foul manna grass reach to my knees, carrionflower threatens to climb over all the adjacent plants, and orchard grass stretches out along the road.

On the drive home Wednesday, maple and elm seeds rained down on the car as I stood at the stoplight. I met my younger son at home, and after bagels we walked the dog. Silver maple seeds were brittle and brown in the gutters. They appear all to have fallen in one 24-hour period. In the forest, about half of the sedges are going to seed: Carex blanda, Carex albursina, Carex grisea, Carex hirtifolia, Carex jamesii are all filling in. Carex blanda is a funny one, as it seems to lag behind Carex albursina, which is a very close relative and overlaps with it in our woods. I doubt that phenology is needed to keep them separate, and I wonder what developmental peculiarity or climatic adaptation accounts for this difference. Most of the other half are flowering. Carex radiata and Carex sparganioides are bedecked with anthers. It’s a good time to see the coiled stigmas on Carex rosea, tails of little springs poking out of the perigynium tips. A few have yet to go: the wetland sedges in the depressions, things like Carex tribuloides and some big husky tussock that I haven’t been able to put a name to (give me a week) weren’t yet showing inflorescences this past week. The spikes on a somewhat out-of-place upland Carex stipata Thursday morning were gliding out from between the leaf sheaths, still closed; in a wetter, lower spot, I expect it would be 3 or 5 days slower. Wild garlic spathes have emerged.

Mayapples have come into magnificent flower and are the light of the woods. Sweet cicely went from barely blooming to nearly full flower over the course of the week. Miraculously, rue anemone is still in bloom. How long does that thing last? Last year I noted it blooming as late as the 18th of May, but I don’t know when exactly it stopped, because for a couple weeks I didn’t make local notes. Fruits are continuing to swell on annual bedstraw.

The birds are jumbled up together. This past week I heard golden-winged and black-and-white warblers, northern parulas, black-throated greens, all on their way through. Beside them were the songs of summer: pewees and great-crested flycatchers, kingbirds, phoebes, gnatcatchers and red-eyed vireos, tanagers, ovenbirds, buntings and wood thrushes, orioles.

Thursday evening I took a walk in Maple Grove. The robins were chuckling their goodnights as I arrived. Dame’s rocket was in bloom in the St. Joseph Creek floodplain. Across the bridge, yellowing trout lily leaves stood out in the darkening understory beside the last flowers of a false rue anemone. An olive-sided flycatcher called an insistent quick three beers! The first flowers of great waterleaf had opened from among the hairy, spiderlike inflorescence branches unrolling at the tops of the plants. Beside them were the last flowers of Virginia bluebells. Black snakeroot was in flower. Bloodroot leaves were as large as my hand with fingers fully outstretched. The solitary burning bush along the trail backing up onto the adjacent homes was in full bloom.

I walked to the barnyard grass marsh I frequent in the northeast quarter of the preserve and, as the mosquitos were becoming pesky, received my first wood nettle sting of the year, from a plant only as tall as my knee. There has been a lot of rain this spring, and the lawn of barnyard grass seedlings was completely under water. I walked up the hill to the south, toward a fallen white ash tree that I have walked past dozens of times, but never at this time of night, and I was struck at how large a hole was left in the canopy when it fell. It has been down for a couple years or perhaps a few, and there are sugar maples ready to fill in, but the gap is still prominent, especially so in the crepuscule, when openings in the woods often appear to glow. Nighttime affects how things look, and it took me several minutes of circling the tree and peering along its trunk before I was convinced that nothing had changed since I was here last, that really this was the same fallen tree I see almost every time I visit Maple Grove. A buck snorted from 50 feet uphill and darted eastward, toward the backyards that line the preserve, but not far enough to get into them nor to be completely hidden from me.

I continued walking, heard a wood-pewee call. The sun had set as I studied the fallen ash, and it was dark now. Mosquitos were buzzing around my legs. Without warning, American toads began droning from the marsh at the bottom of the hill. They filled the air between the trees with toad-song, like monks chanting in a monastery courtyard, their monotones spilling out into the adjacent forest. They stopped, started again, called intermittently as I continued south to the main trail. The spring peepers in the marsh below the Avery Coonley School had started up, and I sat listening to them before I took the main trail north back toward my bike. As I walked, the toads started up again, and now they continued without ceasing, emboldened by the darkness, layering tone onto tone to make a buzzy, distorted chord that swelled out of the marsh and rolled through the woods like mist. The sound was everywhere, knitting together the springs of my adulthood so that, as I walked toward my bike in the darkness, there was no current spring and no past spring, no this woods and that woods, no life-I-might-have-lived and life I am living, but only one eternal May evening in this particular woods.

Then a bicyclist raced past in the dark, and a group of high-schoolers on their phones, giddy at being out at night, walked past, noisily. I retrieved my bike and headed out, surprising a few kids in the baseball field as I biked past.