Eastern wood-pewees were back in town this week, and early summer (or late spring?) wildflowers have been coming into bloom: baneberry, mayapple (almost), goldenseal. 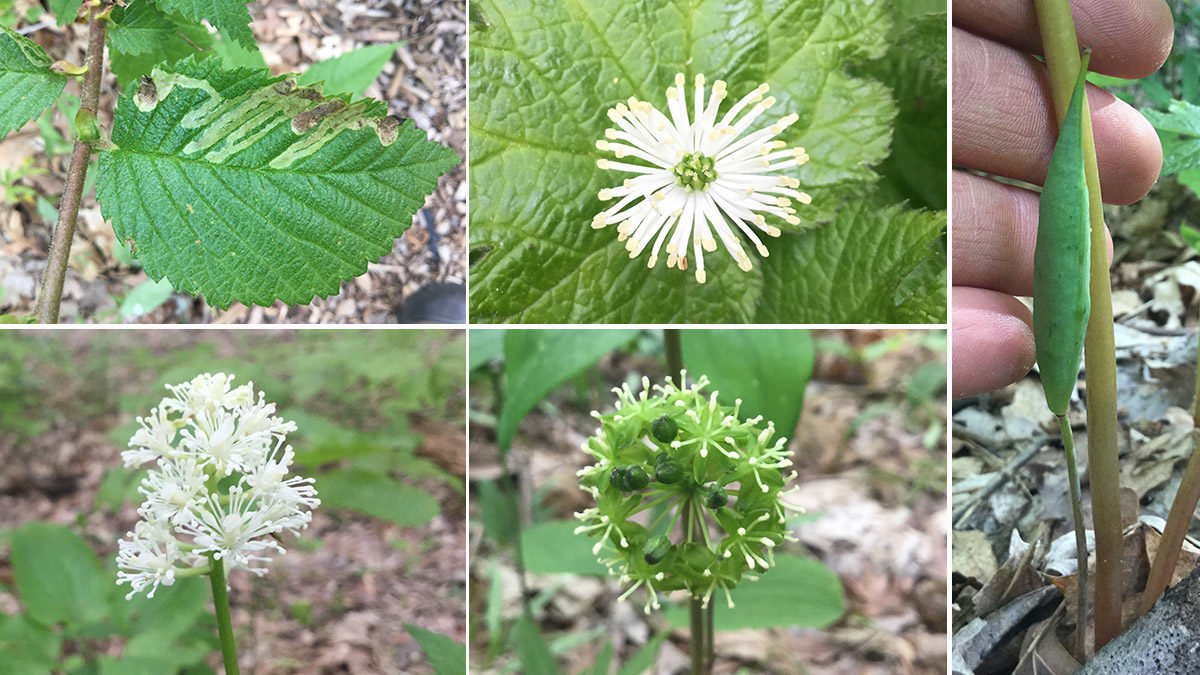 What sensation do you associate with a particular walk? Sometimes it is a smell. Sometimes it is a view. Sometimes it is not a sensation at all, but a state of mind, a realization you had as you walked, or the aim of the walk, or the aim you thought you had as you left the house, as Virginia Woolf’s evening walker walks out ostensibly to buy a pencil, perhaps even thinking the pencil is the aim, but in fact sets out to watch London settling in for the night.1 For me, it is often a song that ran through my mind as I walked, or a bird song that rang through the woods. Thursday morning, it was the call of the eastern wood-pewee, my first of the year, a bird I love, one whose song Rachel wrote out in a book she made for me years ago: “pee-eh-wee… peewrrrr” — first a rise, then a pause, then a descent. It is the sound of anticipation followed by content. It is one the many background sounds of the summer woods.

The winds that morning had filled the gutters in our neighborhood with cottonwood seeds and brought the redbud blooms to the ground, where they spattered the mulch and sidewalks with purple. When I arrived at the Arboretum, I docked my bike by the oak collection and found the leaves on the blooming bur oaks the size of my palm and the redbud leaves as big as nickels and quarters. Bladdernut, viburnum and chokecherry were blooming. Almost all the tree flowers, come to think of it, were white, save for the yellowish green flowers of sugar maple and oak dangling on filaments. The white baneberry flowers were bright on stout thick stalks. The flowers on bloodroot, Dutchman’s breeches, and toothwort had ripened into capsules and siliques respectively. The pearly black seeds of spring beauty were ripe and shook easily into my hand. The mayapple flowers were about to open.

The sedges were in their glory. Sprengel’s sedge was gaudy with drooping spikes. Carex hirtifolia perigynia were gravid, dragging the spikes downward on arching culms. White bear sedge perigynia were filling, nestled beside the staminate spike, resting inside the spathe like baby deer mice in a grassy nest. Anthers were just peering from behind the staminate scales of Carex rosea. Goldenseal and starry false Solomon’s seal were flowering, the brightest white stars of the forest floor right now, beside the pinpricks of light still glinting from the annual bedstraw flowers. Nodding trilliums had come into bloom, a week or so behind the big-flowered trillium. The fetid blooms of erect carrionflower had opened fully, and they smelled of sweetly rotten meat. Tendrils started forming in the past two weeks on the common vining carrionflower, which I have been taking to be Smilax lasioneura, but the flowers are a few days slower than their non-tendril-forming cousin: most have umbels of flowers squeezed tightly shut, but a few on a plant at the edge of the woods, getting a little extra light, were beginning to open and offered a hint of stench. Jacob’s ladder was in full bloom.

Sensitive fern fronds were fully open in the spruce plot. A leaf miner had traversed the leaf of a slippery elm sapling, gorging itself on mesophyll then perforating the epidermis on its way out. The stem subtending the foliage leaves of the touch-me-nots had grown so high that the cotyledons branched from the stalk at about the plant’s waist; a couple of weeks earlier, the leaves had been crammed in next to the cotyledons. Bugbane leaves were curled like wet and still-unfolding butterflies’ wings, the flowers just opening. The inflorescences of wild hyacinth were tipped with violet. Jumpseed leaves were as long as my thumb. Great waterleaf floral buds had formed. Largeflower bellwort was still flowering.

When I arrived at the frog pond just north of Parking Lot 12 it was about 8:30. I was already getting anxious for the day. I was in a hurry to get to the herbarium, where colleagues would soon be meeting me to look through Mexican oak specimens. I was hustling through, when a solitary “peewrrrr” caught me by surprise. Just the descending note of an eastern wood-pewee, I thought. I stopped to listen, but birds don’t always cooperate when you need them to. Indigo buntings were singing and blue-gray gnatcatchers were buzzing from the canopy. A great-crested flycatcher called from north of the frog pond. The burry question-and-answer of what I take to have been a yellow-throated vireo intruded from the east. A least flycatcher (chebek! chebek!) called from the southwest, enough times that I felt pretty certain I’d been hearing it all week. A golden-winged warbler sang from the road. Then, finally, the pewee started up again. Pee-uh-wee… pee-uh-wee… Half a dozen calls like this, each leaving the listener in suspense. Is it? Is it?! Yes, there’s nothing else it could be, right? But I am a casual birder, and I need a little more. Finally the descending call, “pewrr.” There it was. It’s one of several calls I look forward to each year and think to myself when I finally hear it that summer has come. I walked into work past the Big Rock Visitor Station serenaded by a northern parula warbler. I arrived at the herbarium and turned my attention to oaks for the remainder of the day.

That afternoon on the walk back to my bike, aniseroot was in bloom and wild strawberries were flowering along the trail. The next day temperatures dropped to the high 40s and we all froze. But I can’t be disabused of my sense that it’s really summer now, early summer of course, but not really spring any longer.

1 From the essay “Street Haunting: A London Adventure,” in The Death of the Moth, and Other Essays by Virginia Woolf: “No one perhaps has ever felt passionately towards a lead pencil. But there are circumstances in which it can become supremely desirable to possess one; moments when we are set upon having an object, an excuse for walking half across London between tea and dinner. As the foxhunter hunts in order to preserve the breed of foxes, and the golfer plays in order that open spaces may be preserved from the builders, so when the desire comes upon us to go street rambling the pencil does for a pretext, and getting up we say: ‘Really I must buy a pencil,’ as if under cover of this excuse we could indulge safely in the greatest pleasure of town life in winter — rambling the streets of London.”