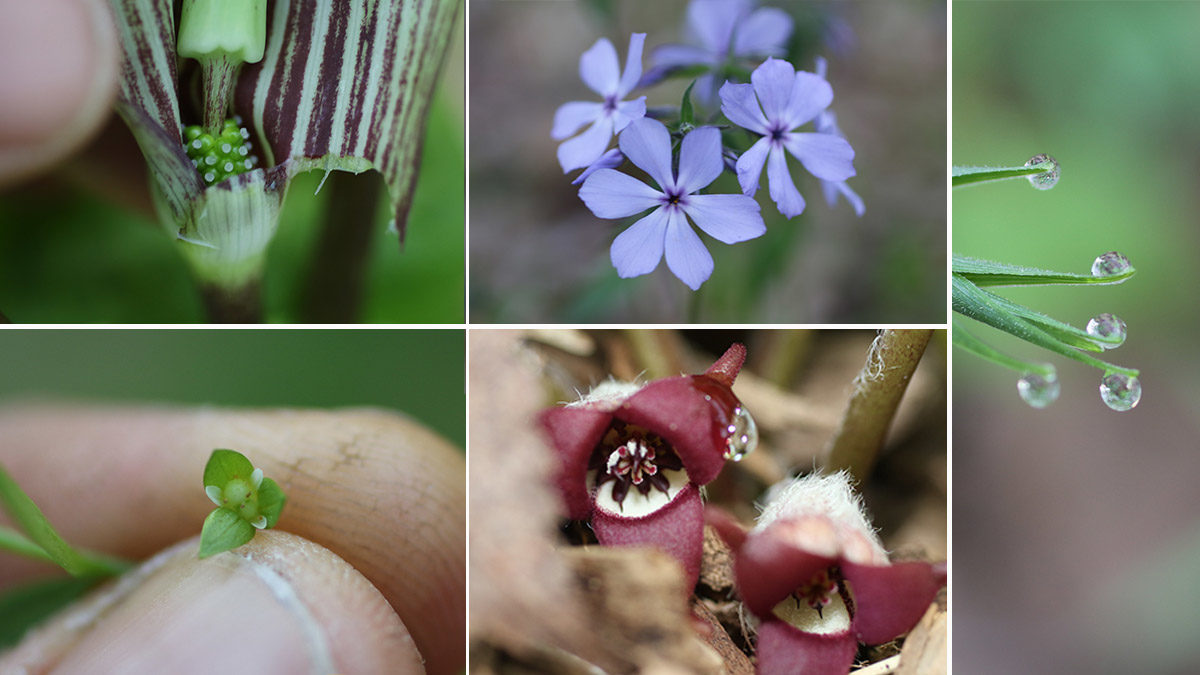 Monday morning the sun burned like a crown over the car dealerships, as though the hosts of Heaven were gliding in over Ogden Avenue. When I came in the Finley Road gate, a common yellowthroat was singing from the wetland under the power lines, the first I’d heard this year. On the road through the East Woods I heard a golden winged warbler and a black throated green. These golden wings. Sweet sweet sweet sweet Susie. Just after sunrise Wednesday, there were oven birds in Maple Grove Forest Preserve, calling teacher teacher teacher teacher! A blue-winged warbler sang its lackadaisical beeeee-buzzzzz from the edge of the baseball field. The squeaky wheels of the black-and-white warblers have been going on and off around the frog pond under the buzzing of blue-gray gnatcatchers. What would the birds think if they could read and hear the nonsense we make up to remember their songs by? It would be as if they had given humans names corresponding to the shapes of their skulls seen from above, after objects that they resembled from the birds’ world. Crows egg. Kettle pond. Robins nest. And then said them in their own languages. Perhaps they do. If so, we’re missing it.

The far east corner of the woods is clouded with blooming redbuds. The songs of veery and wood thrush fill the forest around the spruce plot each morning. Virginia bluebells are pooling along the roadsides. On my ride out Friday, a hummingbird was feeding in the colony of bluebells near the top of the hill by Parking Lot 10. It moved from flower to flower, industrious, intent. In 2001 I watched a hummingbird do this same thing in Forest County, Wisconsin, where I was tagging shoots of Carex projecta to see what their lifespan is. The edge of the plot was marked with blue flags, and as I finished for the evening, and the light was growing too dark to see clearly what I was doing under the maples and red oaks, a hummingbird entered and visited one blue flag, buzzing loudly. It of course drew no nectar. It visited another, then another, growing increasing petulant as each one failed to yield any nectar, finally lighting on a wire to glower as evening descended.

A colony of celandine poppies is in full bloom along the road at the northeast corner of the woods, and swamp buttercup is flowering in every seep and hollow. Prairie trillium is in its glory right now, tall and fully flowering. Big-flowered trilliums have begun to bloom as well with nodding trillium just a few days behind, white petals still peeking out from between the sepals. Mature leaves have filled out on Hepatica. Woodland phlox is in full bloom. Jacob’s ladder flowers have unrolled while the false rue anemone has gone mostly to pieces, flowers unravelling, shedding white petals by dribs and drabs. White trout lily has turned its ripening capsules toward the sky. Capsules are swelling on downy yellow violet.

At the beginning of the week, I noticed nickel-sized leaves of moonseed along the roadside, but by Friday the vines were starting arch. Carrion flower is growing like Jack’s beanstalk, leaves spreading outward and expanding. The sedges are showing their true colors: Carex woodii, C. pensylvanica, and C. sprengelii fruits are swelling, anthers and stigmas are waving around on hairy sedge and white bear sedge (C. albursina), and spikes are growing whitish-silver in advance of opening on Carex rosea. Our two prominent winter annuals are feeling quite differently about life right now. The last week of April, the false mermaid bolted and flowered. At the beginning of this past week, the stems were stock upright and heavy with swelling nutlets, the spreading sepals clinging to spindly stems reminiscent of the submerged traps on a bladderwort in midsummer. Over the course of just five days, this plant that was the dominant green of the East Woods started to yellow and sprawl across the forest floor under the rapidly greening canopy. But that dying back is a sacrifice, not a surrender: the plant appears to be pouring its last resources into the tiny fruits paired inside the flowers. Annual bedstraw, by contrast, is turgid, aggressive, and in full flower. The little white stars on your walks over the next few days will be amassing pollen to make summer seeds.

Toads were calling this week in the pond behind the greenhouses, sometimes in the mornings, sometimes in the afternoons, sometimes not at all. One morning I thought I heard them calling from the marsh underneath the powerline, but I wasn’t sure over the din from I-88. Most afternoons on my bike ride out, I heard them calling from the Carex atherodes marsh on the left side of the road just past the crabapples, where until last year there was a great shingle oak, and on the other side of the road where the aquatic buttercups flower in June. This week I started hearing orioles piping along the Heritage Trail and in the oaks behind the research building. Indigo buntings have been singing from the edges of the fields. Great crested flycatchers are calling from the far end of the East Woods. These are birds of summer. Friday night Rachel and I came home late and stopped at Fresh Thyme. From over the parking lot came the buzzing roar of a nighthawk. A nighthawk on the 10th of May! This is a bird I learned in my 20-something Junes in Madison, when they were clearing the skies of mosquitoes over East Washington, standing guard on the flat rooftops of the old factories, marking summers as a naturalist and bike rides with books and watching the stars reflected in the lakes.

Summer is not a month early, but we are on the turn from spring. The geraniums and phloxes are in bloom and false mermaid is senescing. Starry Solomon’s plume is on the cusp of on flowering and Solomon’s plume did bloom by the end of the week. But only Monday morning I found the Solomon’s plumes just unrolling, and every third or fourth plant dotted with guttation droplets at the tip of each leaf. Stigmas appear to just be receptive on Jack-in-the-pulpit. Camassia floral spikes have just emerged, but the flowers are not open yet. Flowers are forming on sweet cicely. Jewelweed leaves have surpassed the cotyledons in length. I began seeing poison ivy leaves fully open this week, and they are still filling. The leaves are mostly out on the trees, but the red oaks and bur oaks are shedding catkin-laden branch tips like rain when the squirrels take to them. Catkins have just descended on the shagbark hickories. And while the false mermaid is dying back, this week I witnessed the finest show of toothwort flowers I’ve seen all spring.

I am finishing this up at night on the second Sunday in May. Tomorrow morning begins a week of work with collaborators from Mexico. Our talk will be of gene flow and lineage diversification, speciation, adaptation, biogeography. My thoughts will flit among populations differentiating in the Sierra Madre Occidentale, tiptoe between genomes, open and close by turns as I consider possibilities and then look for evidence. My colleagues and I will look at checklists, specimens, maps. I’ll shuttle between our conversations and a few manuscripts at various stages of revision, heavy on the oaks with a dash of sedges. The sun will rise tomorrow morning over Ogden Avenue as it does every Monday, and the week will roll once more, a week of noticing things one moment, trying to make sense of them the next.

Opening the kitchen window tonight as the boys read themselves to sleep, I hear no frogs, and of course the crickets haven’t started yet. No birds twittering tonight in our neighborhood. Perhaps they’ll be on the move again when I wake up tomorrow. It is still spring.