This week, the spring ephemerals erupted into bloom in the woods. Red admiral butterflies started sparring in the lawn adjacent to the Children’s Garden. 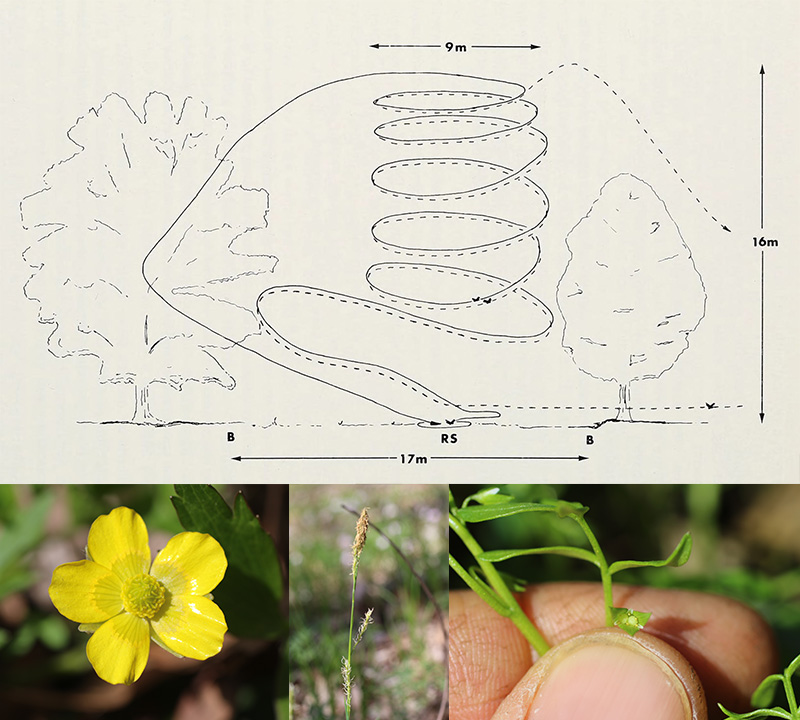 Wildflowers flooded the woods over Easter weekend, like water spilled over the edges of the creek, running in sheets across the fallen oak leaves and overtopping the foliage that has carpeted the woods the past two weeks. The spring beauty in the woods caught up with its cousins under the planted oaks, where the mulched beds are still pooling with white and pink. The yellow trout lilies in the north half of the East Woods are deep yellow, deeper than the yellow of marshmallow Peeps or egg yolks, tulips or Forsythias. Bristly buttercup is flowering in seeps, and large-flowered bellwort, wood anemone, rue-anemone and false rue-anemone are blooming in the uplands. Downy yellow violets and wood violets flower beside each other under the oaks. Marsh marigold fills the springy seeps. Virginia bluebell flowers have gone from closed at the beginning of the week to perhaps a quarter of them open on Thursday.

This is the week for woodland wildflowers. There are still far more leaves than flowers, however. For every square foot of white trout lily flowers, there are perhaps 4 more of unflowering trout lily lawn. For every toothwort bloom there is a garden of groundcover. Bloodroot flowers have already gone to pieces while the leaves continue to expand, sopping up sunlight to provision the swelling capsules. Wild leeks are unabashedly soaking it up. Wild garlic and broad-leaved bedstraw haven’t so much as thought of flowering. Duckweed is spreading across ponds. It is perhaps a sedge taxonomist’s conceit, but I cannot help thinking of the flowers as an incidental part of life in the woods. I know better, of course: without flowers we don’t have sex and recombination, and there are all sorts of reasons to want those. But when I look at the woods, even in this week of flowers, I see autotrophs, photosynthesizing behind their finery.

On my walk out on Monday evening, about 5:00 p.m., I followed my typical shortcut, out the back side of the research building, up the path through the conifers, then northeast around the Pinus densiflora toward the Children’s garden and the four pillars at the top of the hill. I typically think of this lawny no-man’s land as a place to hustle through and scan for flowering weeds, use the steps to check my camera, get my head calibrated for a few minutes of looking once I get back into the woods, where I’ll gather up observations on the way back to my bike. Rounding the Pinus densiflora, I entered a sort of room of spruces to the west, the Children’s garden 100 feet to the north, a Pinus cembra to the south. The Picea koyamae was tall enough to crack its crown over the fence if it fell toward the garden. The noise of I-88 died down with the pine between us, and I saw a butterfly moving around. I thought at first it was a mourning cloak, but there was too much color. Painted lady? No… red admiral? Probably, but there wasn’t much time for wondering about that, because I realized after focusing on the one that in fact I was in a clearing with many, all apparently involved in some kind of chase, flying around each other into the air.

I’ve seen individual butterflies doing this, meeting each other in midair and then flying up and around one another, spiraling higher and higher before they split off or a third comes in. But at this moment it seemed to be all around me. At first I felt I’d walked into utter chaos, a riot of butterflies, but within a minute or two what I was seeing sorted out a bit, and it seemed perhaps just two or three red admirals were taking turns patrolling this little spot. Or maybe each was patrolling a subarea within a larger room closed in by trees and shrubs. The others appeared to be interlopers or playing tag-team, so there were always just a couple or a few in charge of the opening. The core butterflies at any given moment would rest periodically on a patch of matted dead grasses in the otherwise greening lawn, only for a second at most, then fly into the air to greet an incoming butterfly. They would circle upward in a helix, and often a third would come in and that one and one of the first two would go barreling off toward the south, up near the treetops, almost as fast as a hummingbird patrolling between flowers–is that possible?–while the remaining butterfly settled down to rest for his allotted 1/2-second.

They were ceaseless, and I could not get a decent photo. I crouched for several minutes by the dead grass where they would perch, waiting with camera in hand, but I landed only one photo, a horrible one, enough however to identify the butterflies positively as red admirals. After 15 minutes or so, I had to go. I wasn’t able to get back to thinking about this until the next day, but with a little reading I found that Vanessa atalanta L., the red admiral, is notoriously territorial. In a 1979 article in the Journal of Research on the Lepidoptera, Royce Bitzer and Kenneth Shaw describe observations made on the Iowa State University campus, where they identified five red admiral territories. Their observations were uncannily like what I observed: males occupied territories, generally ellipses of 12-24 m long, with a few resting spots on bare ground or sidewalk, invariably lighter than the surrounding grass. Intruders (or, perhaps for the scientists’ amusement, dry floating leaves) were intercepted by the resident males, who charged from beneath and forced the potential invaders upward in a spiral to the level of the surrounding treetops, boosted them over the rim of their shrub- or tree-enclosed room, and went back to patrolling. They did not feed, oviposit, mate, or roost within their defended territories. They were fast and intent.

That night I sat on the bedside with my son and listened with him to the story of Icarus and Daedalus, which was playing on the CD player beside his bed. As Icarus fell into the water, I recalled W.H. Auden’s “Musee des Beaux Arts”. The poem centers around a visit he describes in a letter to a friend thus: “I have been doing the art gallery and trying to appreciate Rubens. The daring and vitality take one’s breath away, but what is it all ABOUT?” His poem begins with lines that follow you around on your afternoon walks:

About suffering they were never wrong,
The old Masters: how well they understood
Its human position: how it takes place
While someone else is eating or opening a window or just walking dully along…

and then closes with a scene from Breughel’s depiction of the death of Icarus, in which the entire painting is filled with doing and life and activity, and far off in the background we see the smallest and most insignificant of splashes. He tells us:

… the ploughman may
Have heard the splash, the forsaken cry,
But for him it was not an important failure; the sun shone
As it had to on the white legs disappearing into the green
Water, and the expensive delicate ship that must have seen
Something amazing, a boy falling out of the sky,
Had somewhere to get to and sailed calmly on.

Daedalus circles over the water watching for his son while late April blooms bob above the foliage. Blue-gray gnatcatchers bizz and wheeze along the tree branches. Flies buzz through the yard. Bumblebees patrol low over the tops of the plants. Bur oak leaves have emerged from the bud but are hugging each other tightly, backs ridged, tummies hidden, the size of voles’ tongues. In only a few days, false mermaid has bolted and flowered, upright carrion flower has formed fists of floral buds, prairie trillium has started blooming in a few places, the petals of great white trillium have peeked out from between the bud scales. Blue cohosh is about to flower. Wood’s sedge and Sprengel’s sedge and Pennsylvania sedge are in full flower.

Wednesday afternoon at around 2 p.m., I returned to the place where the red admirals had been sparring. There were painted ladies flitting around, but none interacting, and no red admirals. I know from years past that there will still be flowers in the woods next week. But I have no idea about the red admirals. I don’t know if they’ll be fighting next week or if they’re done for the year. I’ll check on my walk out on Friday.

3 thoughts on “The woods are pooling with wildflowers, red admiral butterflies are sparring”