This week was exhilarating: snow on Monday, and then temperatures warming through the week. Everything seems poised to flower within the next week or so. 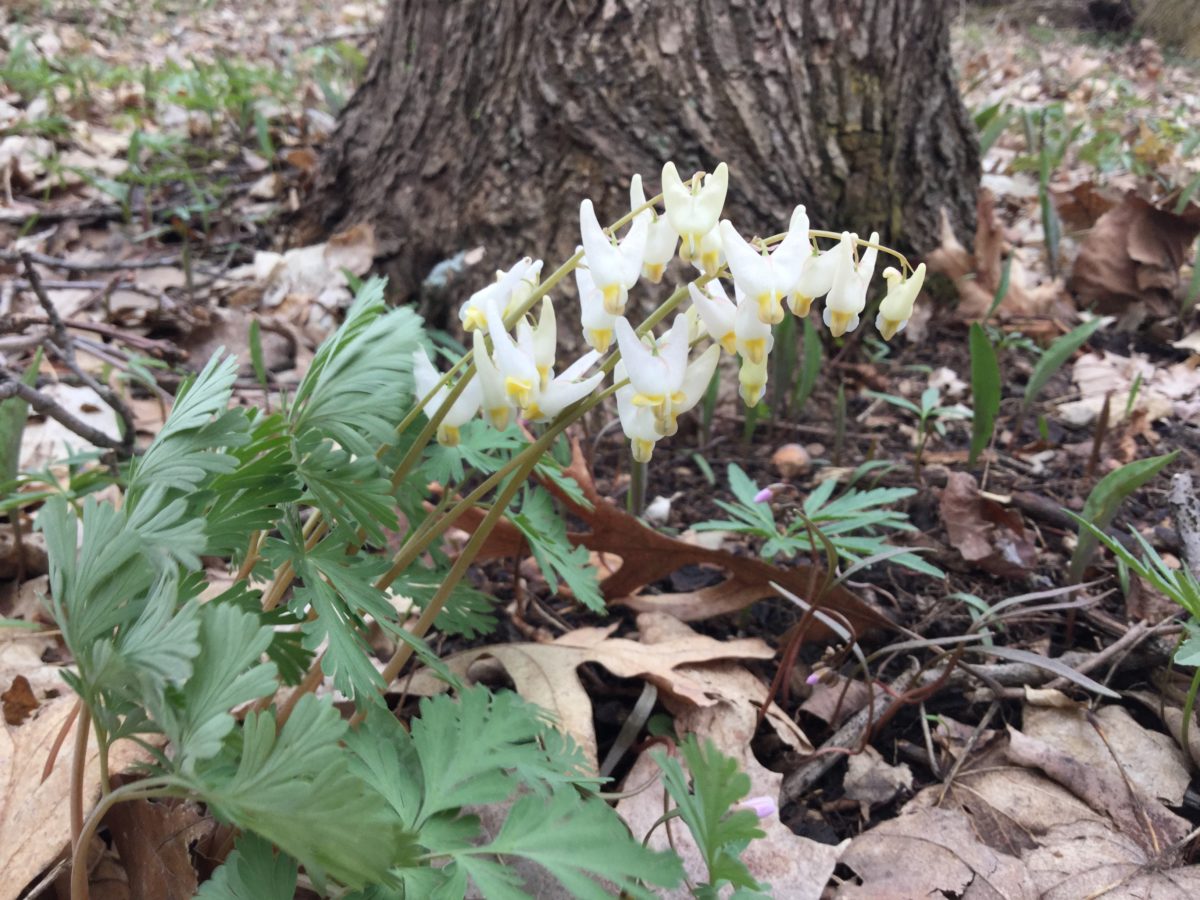 Sunday one week ago we had five inches of snow. I’m not a weather watcher, and it caught me by surprise, right in the middle of April. By Monday morning the snow had started to melt, but it was still several inches thick in the East Woods. The mayapples stood in bunches, like passengers waiting for the bus in a blizzard, coats wrapped tightly under their chins, stiff, silent. The white fawn lilies were half-buried, but their leaf tips were spiky atop the surface of the snow. False mermaid clustered under fallen logs and at the bases of the trees, where the snow had melted down a bit or not accumulated in the first place. Only the spring beauty gave the impression of having been beaten down by the snow; perhaps not set back, but disappointed, slowed a bit. Spring beauty is lovely, but it is not strong.

Monday afternoon, much of the snow had melted. Rachel saw mourning cloak butterflies in the garden. By Tuesday morning, the snow had almost all melted away. At sunrise the field sparrows and robins and song sparrows were all going strong, and by an hour later I was hearing towhees. On the north-facing slope overlooking the frog pond, patches of snow about the size of a boot print were nestled at base of every third tree, downslope, protected from the sun. There were no frogs calling, but a ruby crowned kinglet insistently sang and sang from down near the pond, where a pair of wood ducks were coming in for a landing. Botanizing, eyes on the ground, I stumbled upon a Cooper’s hawk that had caught a flicker. As raptors will do, the bird sized me up before flying off with its quarry, low through the trees, leaving a cloud of feathers in the middle of the chipped trail. When Rachel and I met for lunch that day, we saw bumblebees and painted ladies.

The burned woods have turned green with lawns of trout lily and Virginia waterleaf, whose leaves have expanded rapidly in the past few days. Everything has gone nuts with the melting snow and warm temperatures. The blue-green tips of Carex hirtifolia and the burgundy-based Carex woodii shoots are nearly three inches tall. Pennsylvania sedge has started to flower, only the stigmas visible, whitish filaments emerging from the dark scales at the bases of the inflorescences, sinuous, arching inward near the tips. Inflorescence spikes are up on the Sprengel’s sedge, but still closed. Carex sparganioides shoots are almost as big around as lead pencils. Jacob’s ladder forms bunches in the drier, more open areas of the woods. Some Asteraceae (zigzag goldenrod?) is coming up here and there at the north edge of the spruce plot. Hepatica is still flowering, and the spring foliage has started opening. Common wood violet leaves started unrolling along the edges of the trails and at the bases of trees at the beginning of the week, and by Friday morning they were in bloom. American elm has come into fruit. Early meadow-rue leaves are stacked like hands of playing cards, the margins purple, the floral buds packed as densely as the flowers on grape hyacinth. Blue cohosh stems arch like dancers. Foliage of wood anemone is about 3 inches high and glossy; foliage of bristly buttercup is sprawling. Dutchman’s breeches opened for business this week. The sea of Virginia bluebells at the far east end of the East Woods before the power lines is about to bloom. Ridged backs of the ironwood leaves have gone from just pushing out of the buds to being out, still folded, a little larger than a grain of orzo. Buckthorn leaves have grown to the size of mouse’s ears.

Thursday morning the American toads started singing in the slough behind the local elementary school. In our warm spring of 2017, toads were singing in this same slough on April 15, so perhaps this year is on track from the toad standpoint, even if the wildflowers are lagging. In the East Woods, ironwood catkins were descending. Sugar maple leaves were expanding in the understory (not yet on the grown trees) and the beltlike cotyledons were snapping out of the seeds. Wild ginger leaves were fully out of the soil and spreading, quarter-sized cotyledons were spread wide on seedlings of great waterleaf. Toothwort flowers were opening—they seem to me to be particularly slow this year, but maybe it is my imagination—and whorls of leaves on the annual cleavers were as big around as a fifty-cent piece. There were slugs climbing the false mermaid and earthworms writhing on the sidewalks. In the wetlands beneath the power lines at the east end of the Arboretum, chorus frogs and peepers and American toads were singing together while a belted kingfisher crackled overhead.

Friday I came in to find the ravine sloping down into the woods just beyond the east edge of the oak and maple collections awash with green. Along its shoulders grew an enormous colony of Dutchman’s breeches in full bloom. I found fourteen species in the understory on the east-facing slope of the ravine: a matrix of false mermaid with wild garlic up to the middle of my shins, wild leeks fully expanded, toothwort in early flower, Carex rosea not yet flowering, wild geranium, dogtooth lilies coming into flower, wood anemone, bristly buttercup near the base of the slope, prairie trillium, mayapples unfurling, big-flowered trillium about to flower, spring beauty. And of course the Dutchman’s breeches. Elsewhere in the woods was foliage of sweet cicely and herb Robert, boot-high Canada bluegrass, shoots of Solomon’s seal eight inches tall, leaves just starting to spread open. Peachfuzz was evident on the rosettes of Carex hirtifolia from several feet away. A patch of fleshy scurfy twiglet was sprouting from the wood chips.

On my walk out on Friday I saw several mourning cloaks moving around among the ruby-crowned kinglets fly-catching in the shin-high wild hyacinth foliage and the brown creepers on the tree trunks (I think I saw one last week as well but didn’t get a good look… how long have they been in town?). Bur oak and Hill’s oak end buds were swelling. Floral buds had started forming on the wood anemone. Trout lilies were flowering along the edges of the trail. Marsh marigold was in bloom. The spring beauty was in full bloom under a Quercus x jackiana in the oak collection.

There are a couple of weeks like this each year when I find it almost impossible to keep up. I walk and take pictures, write in my notebook, try to get every name in there, to not forget the state of the leaves and buds and flowers, and I feel I’m just storing stuff up. I recalled as I walked in on Friday a passage from J.D. Salinger’s Franny and Zooey in which Zooey is worrying over his sister, but to his sister, kind of berating her over the phone: “As a matter of simple logic, there’s no difference at all, that I can see, between the man who’s greedy for material treasure—or even intellectual treasure—and the man who’s greedy for spiritual treasure. As you say, treasure’s treasure… and it seems to me that ninety per cent of all the world-hating saints in history were just as acquisitive and unattractive, basically, as the rest of us are.” And what am I doing? Laying up treasure. The way I walk through the woods scribbling down names and conditions of individual plants is essentially piling up dimes and quarters.

And yet it makes me so happy, all this counting and recording and writing it down, like when I was 24 and just realizing that this was what liked to do: catch some little thing about the natural world that I hadn’t noticed and describe it. This is the season for stockpiling observations, laying aside notes and recollections for later in the summer when I can think about it more clearly, or for when I’m 98 and don’t get around so well. This was an exceptionally good week to be doing it.