A 70-degree day on Monday, a week without freezing temperatures, and everything is barreling ahead in the woods. 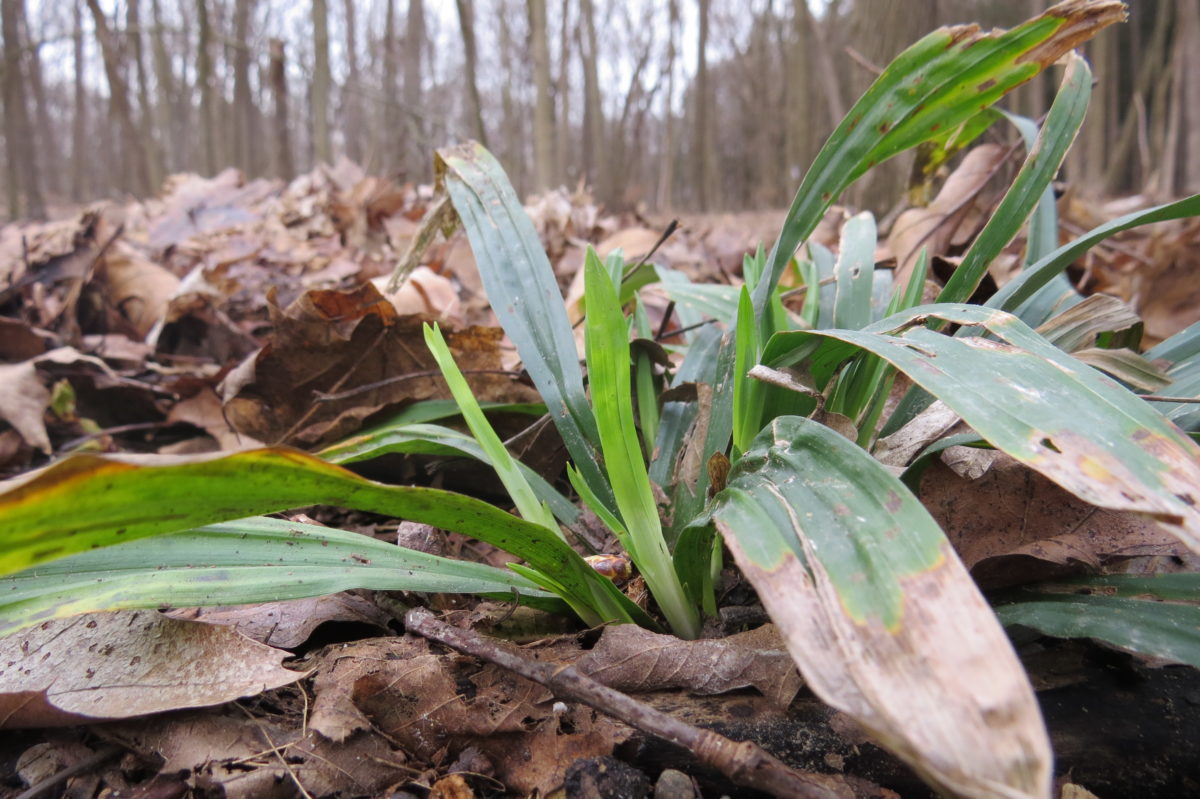 In the backyard the garlic is several inches high. It snuck up on me, until I noticed Wednesday morning that it had gone from nothing to forming darts in the garden beds. I hate to miss a day outside right now. February, I can read for a few days and not worry about it. The world is moving around in February–squirrels dart out to get food and scamper back up their tree, seeds scutter across the surface of the snow–but it make a lot of headway. Now, on the other hand, everything is moving forward, with or without us. I was occupied for a few days at the beginning of the week, and I got an email from a colleague Monday evening with photos of prairie trillium foliage and Hepatica in bloom. The day was in the low 70s, and it looks as though all the woodland wildflowers gained a couple of inches. This week, the forest floor became hairy with false mermaid. It is everywhere, this plant that I used to think of as a rarity (in Dane County, I guess it is). My bike ride in is like a trip along the spine of a chia pet. The onions lining the maintenance road are up to the top of my calves. The redbud is not yet in flower, but the floral buds on the branches are swelling up like moles on the side of your neck. Jewelweed seedlings are pushing out nickel-sized cotyledons. Wild leek leaves are flattening out and starting to resemble dogs’ tongues. Sugar maple buds are expanded about as far as they can go without shattering, the scales leathery-brown at the tips, black near the base, the leaves papery emerging from the scales. Ironwood leaves are pushing their tipmost bud scales off. American beech end buds are about an inch and a half long, sharp-pointed, the scale margins whitish-translucent, leaves just peeking out. Black walnut leaves are stretching their legs, sickly yellow-green. Black cherry buds are as long as my pinky nail. Buckthorn leaves are a centimeter long already, adorable, if I didn’t know what they were.

On my bike-ride in on Thursday morning, I stopped beside the road just east of the spruce plot, where I found these things:

Twelve of these thirteen species I hadn’t seen any evidence of this spring before that stop. I went from there to the Big Rock Visitor Station and walked east, past fresh leaves on the silky wild rye and prickly gooseberry with leaves bigger than my thumbnail. This time a week earlier they were emerging tentatively. There were basal leaves of willowherb in the watercourse that passes under road. I turned south into the spruce plot, skirting the west edge of it. A clone of mayapples stood shin-high, umbrellalike, still closed, some barely starting to open, the tips white against the green leaves. On the south facing slopes of the ravines, the false rue anemone bore pale floral buds, while the true rue anemone was in glorious full bloom. Spring beauty petals were emerging from the buds. Some of the Dutchman’s breeches were looking particularly pantsy. Pennsylvania sedge was tipped with dark-scaled inflorescences, the scales white on the margins. Soon they will be fringed with yellow anthers. Watch for them, little flags in the forest understory.

I walked out through the maple collection. There were phoebes and song sparrows calling. I passed yarrow leaves and Kentucky bluegrass along the service road, then I stopped at the smallest of the three little ponds nestled into the kettles between the heritage trail and the road. I poked along the edge looking for things coming up. In the water I thought I saw duckweed, pale, floating to the surface. As I leaned in closer, I realized I was seeing not duckweed but sedge fruits, the dark achenes inside shrouded in the whitish perigynia. They were flat, pointed at the tip, thin scales, the fruit of Carex tribuloides, which happened to be greening up and hanging over the edge of the pond. The perigynia were massed up on top of the white oak leaves suspended beneath the pond surface, worn down by water and time. Further along the edge of the pond, fowl manna grass was brightening up the shoreline and the reed canary grass was shin-high. A white-throated sparrow sang.

Saturday, Rachel and I took the dog to Maple Grove Forest Preserve and found wild ginger leaves cutting their way up through the leaf litter, still folded. The wild leeks had spread, and I think they are more abundant this year than I’ve seen in the past two. There were a few flowers on the false rue anemone, and the exotic Siberian squill was flowering here and there all through the woods. Trout lily leaves were unfolding to show the mottling on the inner surfaces. The dog and I returned this morning in the snow to find white flowers about to open on a few of the trout lilies. Blue cohosh shoots were growing to six inches, and I found a shorter one with floral buds forming greenish at the top. Carex hirtifolia is three inches long in blue-green bunches along the trails. The burdock leaves are about as big as playing cards.

As I’m writing this the snow has turned to rain and back to snow, the dog and the boys are sleeping, and I’m thinking over a public symposium my colleagues Pat Herendeen and Rick Ree and I hosted yesterday at the Field Museum, on the topic of gene flow in plants. The recurring theme? Genes are shuttling back and forth between species on almost every branch of the tree of life. Yet we still look around and see so much diversity, all these friends of ours coming back in the woods spring after spring, and every one of them its own individual. Blue cohosh. Pennsylvania sedge. Ironwood. We still think of species as individuals. I think everyone in the room agreed that this is a big question for the coming decade: Why do we still have so many different species when the potential for gene flow is so high, and gene flow is going on all the time? And yet we do.

For good measure, I’ll leave with you with the poem “Swallows,” by Kathleen Jamie, whom I learned about Friday afternoon from Josh Mabie:

I wish my whole battened
heart were a property
like this, with swallows
in every room–so at ease

up the stairwell
to stream out into light