We’re in the first week of April, hanging for a moment before the pandemonium of warm temperatures and warblers and spring wildflowers blooming around every corner. 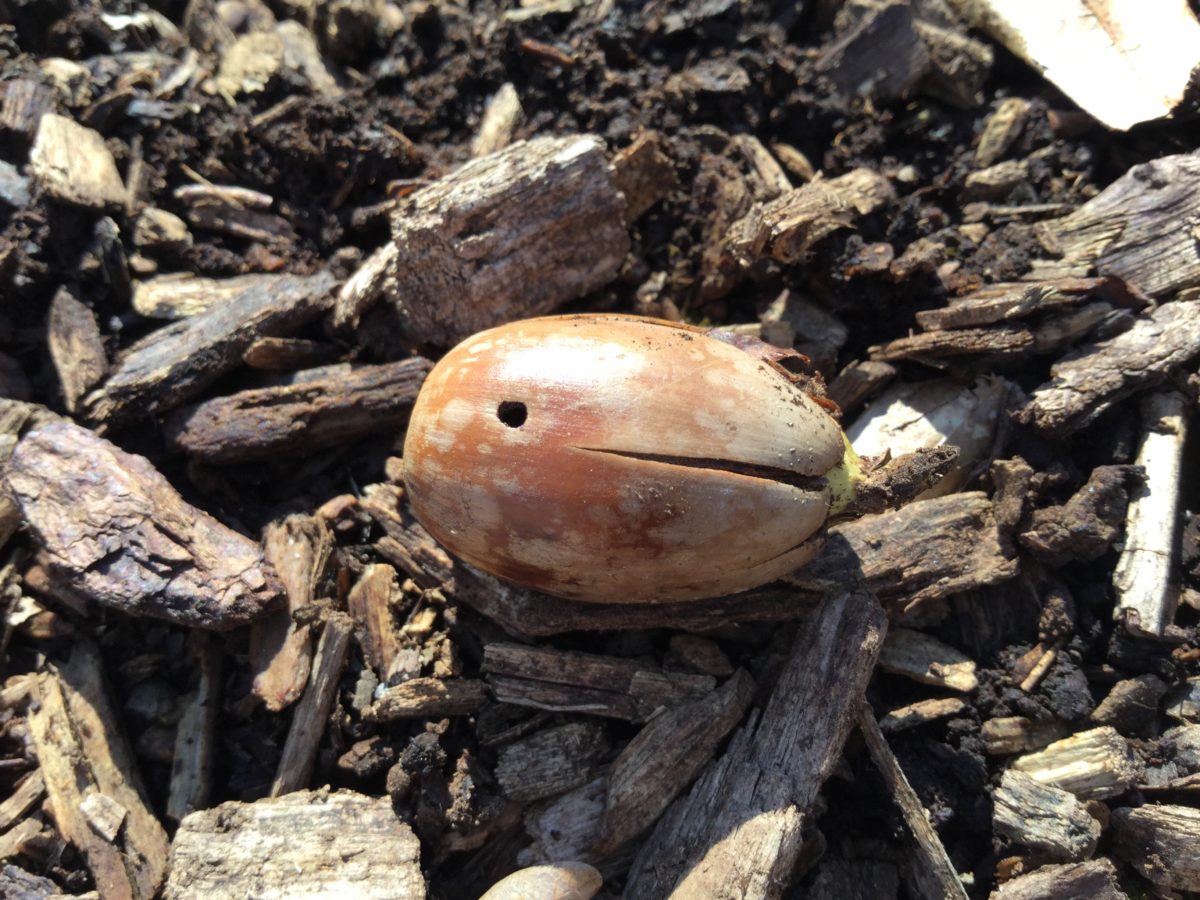 Spring in the forest understory recalls weekend mornings of my childhood, when I would wake up early on a Saturday morning to get to the Menominee River while there was no one out yet, while my parents were perhaps turning over in bed upstairs, resisting getting up for a few more minutes. That hour of quiet before the day started was entirely my own, and the river was my own, for that hour. Soon the grown-ups would be up, and then it was everyone’s. But for the time being, I, like the forest understory before the leaves emerge on the tree, had the world to myself.

We’re in the first week of April, hanging for a moment before the pandemonium of warm temperatures and warblers and spring wildflowers blooming around every corner. The false mermaid is sparsely everywhere. It’s putting on height right now, scraggly in the bare soil of ephemeral watercourses, overtopping the mottled sheets of oak and sugar maple leaves. In a week or so it will carpet the woods. Spring beauty floral buds are clustered tight as chipmunks’ fists, and the foliage is fully grown. Last week, I hadn’t found it flowering yet, perhaps because it was still too cold. I worried that it had tired itself out by starting to flower in December… I’m relieved to find that I was probably wrong. In a week or two we’ll find beds of it. The sedges are greening up. Carex rosea and C. radiata and C. pensylvanica form bouquets of narrow shoots an inch tall or so. Sprengel’s sedge shoots are as long as my pinky, stout for now; by midsummer its leaves will bend over and crease in the middle, and it will be a sprawling mess. Virginia bluebell leaves are swelling up, and their petioles are starting to show… a week ago, they were just clusters of orbiculate blades. Trout-lily leaves are a couple of inches tall, grasslike, mottling barely evident unless you open the infolded leaves. In some, the corm is exposed at the soil’s surface, and it really does look like a tooth. I’m not sure it looks like a dog tooth as much as a child’s tooth, but perhaps “dogtooth violet” sounds better than “child’s tooth violet.” A couple more weeks now the trout-lily flowers will be floating at shoelace level along the trails.

The trees awaken more slowly than the understory. Basswood buds have begun to swell, but the leaves must be delicious, for under the trees there are none to be found. One basswood along the Heritage Trail has been scraped up by a buck. Silver maples in our neighborhood went from flowers just opening on March 31 to fully flowering on April 3. Some of the shrubs are a bit faster: first leaves started appearing on gooseberry and black raspberry last weekend. Along the edge of the trail are last year’s puffballs and bird’s nest fungi. Scraping the leaves aside in search of Dutchman’s breeches on Wednesday, I crushed a stump puffball that had swelled up in August of last year, and still a cloud of brown spores floated off as the puffball broke open. Last year’s dark leaves of C. jamesii and C. albursina are still more prominent than the young shoots beside them. Evergreen white avens leaves as big as the leaves of potted begonias are resting here and there on the leaf litter.

The warm days and cold nights at the beginning of the week frothed up the upper surface of the soil and then froze it in place, forming ice crystals several millimeters long that sloughed off at a touch. Below the icy crust grew gardens of seedlings, and white fungal mycelia spread across the moist, granular soil surface beneath. But that may be the end of it, because after Monday night, temperatures didn’t go below freezing again, and Wednesday morning was sweatshirt-cool but beautiful. Spring peepers and chorus frogs were singing from the kettle ponds on both sides of the south loop of the Heritage trail. The chorus frogs in the pond to the north seemed to be cooler, droning a slow, methodical rattle in comparison to the higher pitched creaking of the frogs in the southern pond. I was reminded of a lecture I once heard in which an experiment was performed on pairs of frogs. One was warmed, its potential mate cooled, and because of the temperature difference between them, the female did not recognize the male’s song. Could the temperature difference on the opposite sides of this hill serve to isolate the populations, or at least reduce gene flow between them?

What else? Tree swallows are patrolling the birdhouses in the field west of Big Rock. Poison hemlock is spreading out in the marshes where the false mermaid leaves off. Reed canary grass is greening up. Golden Alexanders are coming up in the garden. I found my first tick of the season on Wednesday, and a colleague reports that she found three the previous week. Gnats are bouncing around at the south edge of the spruce plot. I find myself this week waiting to see what happens next, seeing if I can remember. Where is it that I saw the hepatica last year? When do the yellow-rumped warblers show up? Is that the lisping of a golden-crowned kinglet or some other little bird I’ve forgotten? My enjoyment of spring is tied up with the joy of recalling things I thought I’d forgotten: an old name, a friend from high school, a trip we took… then a photo falls out of the album and suddenly I’m back there again. It’s the same thing in the woods, with wildflowers I know from New York and Wisconsin and Michigan. I have been reading David Yaffe’s Reckless Daughter: A Portrait of Joni Mitchell the past two weeks, and Joni Mitchell’s extravagent and ambitious “Paprika Plains” has been running through my mind:

It fell from midnight skies
It drummed on the galvanized
In the washroom, women tracked the rain
Up to the make-up mirror
Liquid soap and grass
And Jungle Gardenia crash
On Pine-Sol and beer
It’s stifling in here
I’ve got to get some air
I’m going outside to get some air

It’s late as I write this. The boys and the dog and I have been running in different directions today, and everyone’s wired, having a hard time falling asleep. I take the dog out one last time, and we stand together beside the house in the warm, damp night. We are listening to teenagers chatting several houses away. We are smelling the next-door neighbor’s spent fire. The dog is paying attention to something across the street. Then I realize I am hearing chorus frogs floating faintly in from the south, from blocks away. Where are they? Why haven’t I ever heard them before from our house? For just a moment, at the end of this first week of April, I feel as though I were lifting up above the neighborhood, following the ditches and creeks that fill up along the roads and disappear into storm sewers all over town, floating off to springs of the past 30 years, all a little different, all similar.

2 thoughts on “Geared to changing weather”