This past week, temperatures dropped from the 40s to the 20s. The scene in the woods has turned to shelf fungi, bright green mosses and sedges, squirrel excavations and marcescent leaves in relief against the fresh snow. 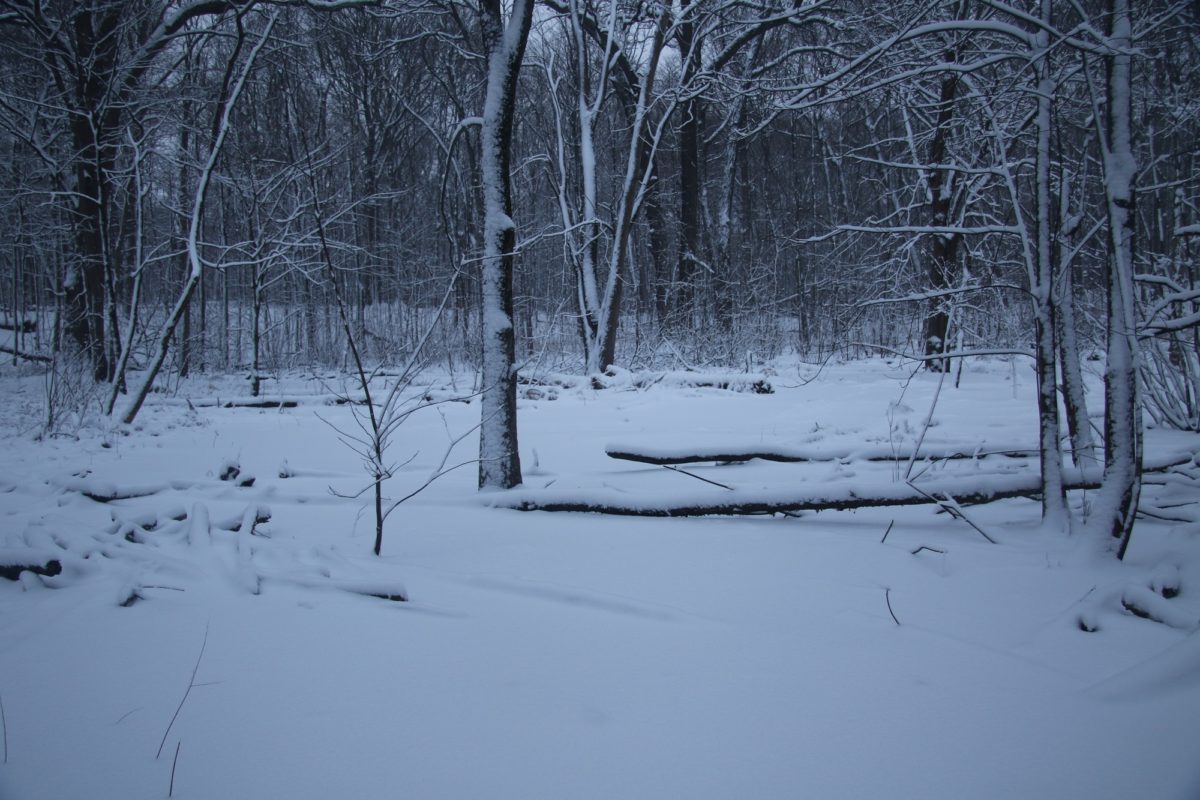 This past week, temperatures dropped from the 40s to the 20s. Biking through the East Woods, I noticed shelf fungi twenty feet up in dead trees, fallen stalks of touch-me-not (Impatiens spp.), mosses bright green on fallen logs and at the bases of trees, the whiteness of air trapped beneath ice in the puddles and waterways that run under the road. On Thursday, I talked for nearly an hour with Wayne Lampa about mosses. He agreed that mosses and evergreen sedges really are the brightest things in the woods now. I was reassured, because I am both color-blind and often attracted to details that turn out to be peripheral to the main action in a given context. These two personal attributes sometimes conspire to make me think that I am observing generalities when in fact I am noticing particularities or coincidences. But Wayne agreed: right now is the time for mosses in our woods, because they jump out at you against the pale brown leaves, on a cut stump at the trail’s edge or the upper surface of a decomposing log. Against my better judgment, and in spite of the raft of oak writing I need to get done in the next couple of months, I took a break that afternoon and checked out Ralph Pope’s Mosses, Liverworts, and Hornworts: A Field Guide to Common Bryophytes of the Northeast and Conard and Redfearn’s classic How to Know the Mosses and Liverworts, which I think I once snagged at a booksale and then let go, unused, after several years.

This week, I realized there were egg cases of Chinese praying mantis (Tenodera sinensis) on the goldenrods in our back garden. Who knew? More praying mantises visited our garden this summer than we’d ever seen before, including one who systematically devoured a monarch butterfly as we watched (I would never have seen this if Rachel hadn’t called me out; the photos here I think are hers). Having egg cases in the backyard is icing on the cake. The dog started going for them, so I pulled them into the garage to overwinter. I’m hoping for 100s of mantids come summertime.

Snow started this morning. A cardinal and a few nuthatches were singing at 6:45 as Rachel and I walked the dog through Maple Grove. The snow continued through most of the day. When I returned for a walk at 3:30, the hill beside the forest was thick with kids sledding. Snow coated the east side of all the trees. The squirrels appeared to be waiting it out, holing up in their trees and descending only to excavate a cache. Squirrels are said to remember where they have cached their food1, and the way that they were operating this afternoon in light of the snow leads me to believe it. The stems of calico aster (Symphyotrichum lateriflorum) are everywhere, glazed with snow, and sugar maples and wild leeks emerge above the snow’s surface throughout the woods. Musclewood (Carpinus caroliniana) leaves and privet berries are hanging on. The soil that a week ago was teeming with centipedes is frozen now, decorated with snow flakes.

Tonight I walked the dog in the backyard at about 8:30. Last night it was dark at this time, Orion overhead, and I had the lights strung along the side of our garage turned on so we could see as we took the dog out. Tonight, between the clouds above and the snow on the ground, it was light enough outside to read by. As the dog rolled in the snow, I thought of this passage from John Burroughs “The Pleasures of a Naturalist,” in Under the Maples:

… meadow mice… live on grass and roots and keep well hidden beneath the ground during the day, when there is a deep fall of snow coming out of their dens and retreats and leading a free holiday life beneath the snow, free from the danger of cats, foxes, owls and hawks. Life then becomes a sort of picnic…. When the snow is gone, their winter picnic is at an end, and they retreat to their dens in the ground and beneath flat stones, and lead once more the life of fear.

In a few days there will be mouse and vole tracks to follow in the snow. For now, all is quiet, and I imagine the social life under the snow, rodents feeding on tubers and plant stems, bedding down under a translucent ceiling. Perhaps they are safer from owls and coyotes than they would be without the snow. Is it really the party down there that Burroughs makes it out to be? Years ago I saw a small grove of shrubs in Curtis Prairie at the UW Madison Arboretum that had been girdled under the snow while no one was watching. Perhaps the mice in Maple Grove Forest Preserve will feed on the spring beauty shoots and bulbs that I was wondering over last week. I look forward to watching their tunnels and trails appear over the coming days.
——————
1 Jacobs LF, Liman ER. 1991. Grey squirrels remember the locations of buried nuts. Animal Behaviour 41: 103–110.