The snow is a half-inch thick. Tussocks of Carex jamesii wear the snow as though they were wigs laid over half-buried rocks, and shin-high sugar maple youngsters on the forest floor stand out in sharp relief against the white. 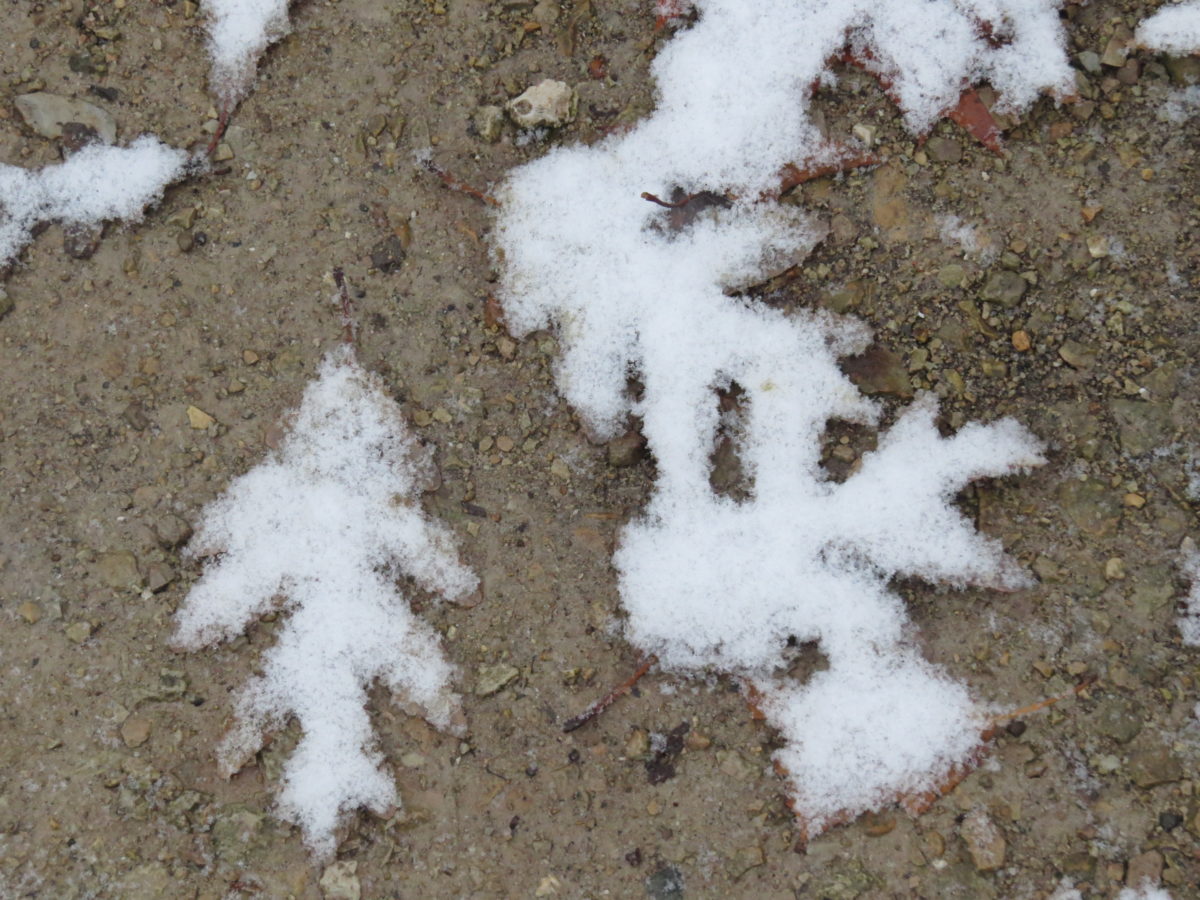 Once a man brought me a story which began with a cut-off head which spoke. And I said to the man, “Isn’t it miracle enough that a head which is not chopped off can talk? — Isaac Bashevis Singer [1]

The snow was about a half-inch thick this morning when I headed over to Maple Grove Forest Preserve. Tussocks of Carex jamesii wore the snow as though they were wigs laid over half-buried rocks, and the tree branches and arching stems of calico aster looked as if they had been spread liberally with icing in the early hours. Ironwood and honeysuckle and marcescent canopy oaks are hanging onto their leaves, but the other trees have mostly let theirs fall. The shin-high sugar maple youngsters on the forest floor stand out in sharp relief against the white snow. The infructescences of wild leek seem to be mostly battered down, though perhaps I was just missing them. Golden-crowned kinglets, white-breasted nuthatches, and hairy woodpeckers were calling.

I brushed aside the leaves in search of false mermaid (Floerkea proserpinacoides). In Quebec, its seeds are reported to germinate in November or December, with leaf emergence in the spring [2]. I found shoots 1/4″ high under the leaf litter on March 14 this year, though they may have been up a bit earlier (I had taken an interest in the soil when it was freezing and thawing, but I believe I went a few weeks in March without paying attention to anything under the litter). I cleared out the leaves in about a dozen spots today where I recall the plants growing, but I found nothing. A few spots had a short seedling or two growing with very vanilla-looking cotyledons. I’m certain that’s not false mermaid, but I don’t know what it is. Do you have any ideas?

The snow is just wet enough to glaze the oak leaves on the trail, leaving the soil wet but not snowy. Squirrels are digging up acorns, perching on the branches to eat them. I trooped up the hill to the south, and as The Avery Coonley School showed up on my left I veered off-trail into the woods. Everything looks different off trail. Trails are designed to get you somewhere: when you walk off trail, you may daydream, but you walk through, not past. I don’t recall exactly what I saw, nor what I thought about, but I have these impressions: white oak trunks mottled with wet snow; broad leaves clinging to the hybrid honeysuckles; wilted, frozen nettles; goldenrods etched with snow; then, unaccountably, an opening with grasses, in a slough that I knew I shouldn’t have come across. I had walked without realizing it over one trail and dropped back down to the base of the hill, and came back across my own footsteps. How did that happen? I blame the snow.

When I returned home, my younger son was just waking up. We ate, and I had my coffee as he put his snowpants on and raced outside, stockpiled snowballs, waited for me. He came to the window several times and mouthed, “are you coming?” Five minutes is forever when you are young. When you are older, the days fly by. I brushed my teeth and we had a vigorous snowball fight for about an hour, then he and Rachel headed downtown for a morning at the Art Institute.

On my walk out of the forest preserve this morning, I thought about the fact that I am 48 this year, halfway to the age at which my great-grandfather Grover Cleveland Hendrix Hipp passed away. I think I’ve always aimed for 96. I consider the things I’ve done already and all the things I still want to do, and I am grateful that here, at my halfway point, on a snowy day like this, I can look forward to one more of these, one more stretch of 48 years, each packed with 12 months. 576 months! I don’t want to set the bar too low, but what if I were to do just one good thing each month? One thing worth remembering in that last year, when I may do more sitting than biking, and I can look back at 576 good things: a snowball fight with my younger son; canoeing with my older son; walking with my wife in the dark, in the early morning before the boys are awake, watching the moon set; being with my family, exploring the city or the woods or seeing a movie; walking around the woods, writing more of these, whatever these are; watching the garlic come up in the garden. Is that too humble a goal? Is that too little to want? Just to have that seems miracle enough.