Bur oak acorns have fallen, the Solomon’s seal and Solomon’s plume have gone to fruit. The woods are filled with asters and goldenrods in bloom. 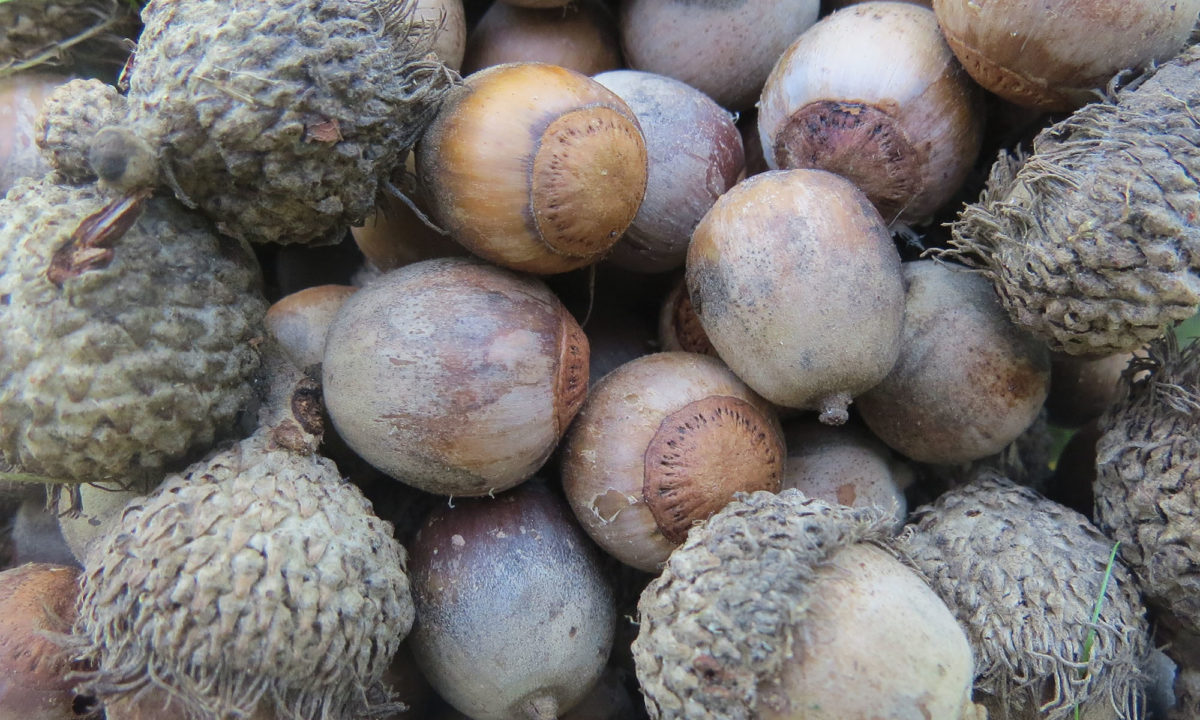 “We go about our daily lives understanding almost nothing of the world.”
— Carl Sagan, introduction to A Brief History of Time, by Stephen Hawking

A week ago I found myself scrounging for bur oak acorns under blackberries and poison ivy in several of the DuPage County Forest Preserves. I was aiming to get 160 or more acorns from each of 20 trees for a colleague who is planning a set of common gardens. The preferred way of making these collections would be to pick the acorns directly from the tree, but by the first week of September, storms had already knocked acorns off the trees by the bucketful. They are still falling, but they are nearly done. Collecting from beneath the trees turns out to be more my speed, anyway. I love activities that involve grubbing around on the ground, where there is cool and shade, where earthworms drag leaves into their burrows, where pillbugs and centipedes scuttle and mushrooms keep popping out. Berries of jack-in-the-pulpit (Arisaema triphyllum), Solomon’s seal (Polygonatum biflorum), and Solomon’s plume (Maianthemum racemosum) had become ripe since I was last out and were mostly dispersed. The husks of stump puffballs (Lycoperdon pyriforme) were frozen in their last breaths, spores already excerned through the pores torn open in their caps. In Blackwell Forest Preserve, I came across a bright white giant puffball as big around as a volleyball, fleshy and perfect. I would love to have brought it home to cook up, but my collecting permit extended only to acorns.

I spent about 40 minutes under each tree, crawling on my hands and knees, picking up acorns individually, inspecting them for insects or mold, dropping them into a bag. Here and there would be a batch of ten or more acorns. Squirrels were active overhead, raining nuts down around me. I would move towards them to try to get them fresh. Underneath a tree in Danada Forest Preserve, one fell particularly heavily, landing beneath a raspberry bramble. I crawled under to collect it and found not an acorn, but an infant gray squirrel, hairless, eyes closed, curled on its side, a contusion appearing on its right temple. The squirrel twitched and took a few short breaths. After a few minutes it stopped moving. The sky was blue and people were biking the trail about 30 feet behind me. I filled a gallon bag with nuts and walked out to the trail, back to my car.

With the passing of the equinox on Saturday night, fall has arrived in earnest. Pokeweed (Phytolacca americana) berries are ripe, easily crushed between the fingers. Wild ginger (Asarum canadense) is yellowed and reclining. Calico aster (Symphyotrichum lateriflorum) and elmleaf and zigzag goldenrods (Solidago ulmifolia and S. flexicaulis) and arrowleaf asters (which I realize this year I am going to have to learn properly before I put any names on them, based on how the Flora of the Chicago Region treats them) are in full bloom. A lawn of annual grass seedlings I first noticed in a depression in Maple Grove Forest Preserve in mid-August has grown into a thicket of chest-high barnyard grass (Echinochloa muricata). Meadow grasshoppers are calling. Wild lettuce has gone completely to seed and white snakeroot (Ageratina altissima) is not far behind. Turkey-tail fungi are bright white around the margins.

On my morning ride in yesterday, as the harvest moon was dipping toward the horizon, the neighborhood was filled with crickets. No birds could be heard until I crossed I-88, where a killdeer was crying over the ditches on the east side of Finley. A great horned owl called. As the last stars faded, a nighthawk twisted and banked over the field west of Big Rock. The sparrows were just rustling and lisping in the grasses. I walked the remaining way to work, and a flock of geese flew overhead as I was settling in at my desk; I heard them but could not tell what direction they were heading. Later that day, I found the overcast afternoon filled with the cricket calls of nighttime. The cicadas of late summer were gone. In dropseed (Sporobolus heterolepis) clumps at the edge of Meadow Lake, an exceptionally loud grasshopper was calling, which I take to be a robust conehead grasshopper based on call and Cindy Crosby’s photo of the species from 12 days earlier on the Arboretum’s west side. The call is like a circuit arcing loudly and without pause, or a first try at synthesizing the sound a buzz-saw. On the walk out to my bike, there were still fresh acorns under a white oak tree, apparently just fallen.

It is still dark as I write this. The crickets are calling outside and the work I have to get done today is becoming distracting. I can hardly believe the summer is past. I risk not posting this at all if I don’t do it now. I’ll leave you with the best thing I’ve read this week, a poem by Billy Collins, from his collection Picnic, Lightning:

In the Room of a Thousand Miles
by Billy Collins

I like writing about where I am,
where I happen to be sitting,
the humidity or the clouds,
the scene outside the window—
a pink tree in bloom,
a neighbor walking his small, nervous dog.

And if I am drinking
a cup of tea at the time
or a small glass of whiskey,
I will find a line to put it on.

My wife hands these poems back to me
with a sigh.
she thinks I ought to be opening up
my aperture to let in
the wild rhododendrons of Ireland,
the sun-blanched stadium of Rome,
that waterclock in Bruges—
the world beyond my inkwell.

I tell her I will try again
and travel back to my desk
where the chair is turned to the window.
I think about the furniture of history.
I consider the globe, the lights of its cities.
I visualize a lion rampant on an iron shield,
a quiet battlefield, a granite monument.

And then—just between you and me—
I take a swallow of cold tea
and in the manner of the ancient Chinese
pick up my thin pen
and write down the bird that I hear outside,
the one that sings,
pauses,
then sings again.